So will this mean the three storey building on Johnson will be torn down? What will happen to the patrons of the Games Workshop?

So will this mean the three storey building on Johnson will be torn down?

I am still not sure what is scheduled to be restored and what is being torn down. It sounds like maybe only the Duck's Building will stay.

That's what it sounds like, for sure. The Canada Hotel building along Johnson Street may be in poor shape, but as we've seen it might also have quite the facade hiding behind the stucco.

From a strictly aesthetic perspective, only the Duck's Building looks worth preserving. I can't imagine this is going to be the easiest sell at the Council table.

^ It looks like the Canada Hotel is registered, as is the rest of the site aside from the parking lot. In the image below, gold is "Registered" and that brownish colour is "Designated." If you register your property, you get to trade in the gross brown colour for gold, what a deal! 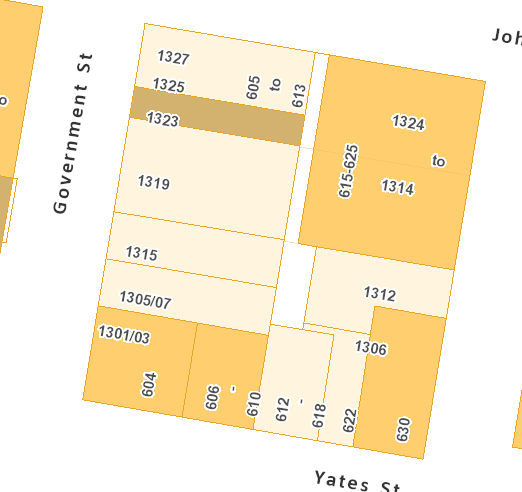 Ah, very good. So we can rest assured that it will be incorporated into whatever Chard decides to do. We may also just see an addition of a floor or two above a restored Canada Hotel building.

I've put this question before Chard's team. I will also be seeing them on Wednesday and will have the opportunity to ask more questions.

There is nothing about that one-storey carbuncle (1306 Broad Street) directly to the north of the Legacy Gallery that makes it worth preserving. I hope it disappears if this project goes ahead.

There is nothing about that one-storey carbuncle (1306 Broad Street) directly to the north of the Legacy Gallery that makes it worth preserving. I hope it disappears if this project goes ahead.

It's a heritage carbuncle. They're probably going with the "bright red gem" definition over the "infected abscess" one.

The community meeting for this project is today at 6:30. Anyone going to get the scoop?

...the applicant proposes to retain and restore the existing Ducks Building at 1314 Broad Street. This renovation will see the retention of the majority of the existing structure – including an historically-significant rubble wall – while bringing the building up to current seismic standards. This portion of the development will include 44 micro-condominium suites. To the north, a newly constructed, connected structure will incorporate 34 micro-condominium suites. To the south, a second newly constructed building will contain 49 suites owned and managed by the University of Victoria as rental accommodation for graduate students and staff. All three structures will include ground floor retail space, which will flow from the street into the core of the Ducks building and has been designed to revive, animate and connect the 1300 block of Broad Street...

So it appears new construction will pretty much surround the Ducks Building both to the north and the south. I am sure Pam will loathe the towering 7 floors facing Johnson Street and to the south on Broad. I like it, so that pretty much means this is already dead in the water.

Is this the first time we have seen a specific request for short-term rental provisions at the development proposal phase?

...This model...is an affordable alternative for downtown residents made even more affordable through the allowance of short-term rentals. In addition to improved affordability for homeowners, application of the transient zoning classification will also directly support the City’s tourism and education sectors and is a symbiotic fit with the adjacent UVic housing as a form of temporary accommodation to visiting professors and students. Without the application of transient zoning, the market appeal and financial viability of this project is significantly impacted...

...I do, however, feel that perhaps it is time to hire an architectural firm other than MCMP...

It would seem that de Hoog & Kierulf are the architects on this project.

Looks awesome. I expect it to come down a floor on each side because the Ducks building is being towered over by the new build 😉

I'd love for that new construction to go on the parking lot at Fort/Langley but I think it sets a dangerous precedent re: replacing the old buildings on Johnson. Those stripped old buildings can be restored (with one or two new levels on top). It happens in other places. There's no reason why it can't happen in Victoria, too.

If it's okay to knock those old buildings down in this case then what about the next case and the next after that? Victoria could easily revert back to its 1950s/1960s ways, and I suspect that it would be a very difficult train to stop once it gets rolling again.

Looking at that image, the buildings on Johnson should be shorter, anyway. The whole thing ends up seeming too massive and unified (a.k.a. not fitting with the old town) when it's the same height from one end to the other. Roof lines in the old town should step up and step down from one building to the next. Levels shouldn't line up exactly, etc. Nothing betrays modern construction like overly consistent roof lines and floor levels.

At first glance, I thought it looked like three separate buildings (a good thing).

Seven stories would work here no problem if the taller portion is set back. I bet they do that. Broad st has so much potential it just feels like it needs something to give it a boost to draw more vibrancy to it. This might be it.

Broad Street isn't a through-street and it's in the heart of downtown. Want vitality? Pedestrianize it!

The first image? Look at how the tops line up. In the old town things really shouldn't be so orderly and consistent. More like so:

FYI: from here on out be prepared to listen to my skipping record re: the old buildings should be preserved & restored.

...FYI: from here on out be prepared to listen to my skipping record re: the old buildings should be preserved & restored.

And the building most viable for preservation is being restored. I am not a developer, but I imagine the cost of restoration/seismic upgrading of every building in Old Town is simply not feasible. There comes a point when new construction is likely the only financially responsible option. I believe Chard has made a reasonable choice here. Compensation for the "loss" of the Johnson Street structures I think is being handled well.

...a strategy was developed for staging the redevelopment in a manner that would effectively use the new construction to the north and the south of the Ducks building to brace the existing unreinforced masonry flanking walls to allow them to remain as feature walls in the interior spaces of the final project...

Reminiscent of the "modern" addition to the Capital Iron building I would think.

I do have some reservations about the ground level of the Duck's Building. It appears as though it might be losing some of its historical detail,

but perhaps this is only an effect from the sketch-level quality of these initial renderings.

Placing a taller building on Johnson Street makes sense to me as it balances the Carlton Plaza hotel kitty-corner across the street.

...A portion of the Ducks and Johnson site will be registered as a statutory right of way to allow the lane access to be widened...

presumably by the removal of this nondescript structure. 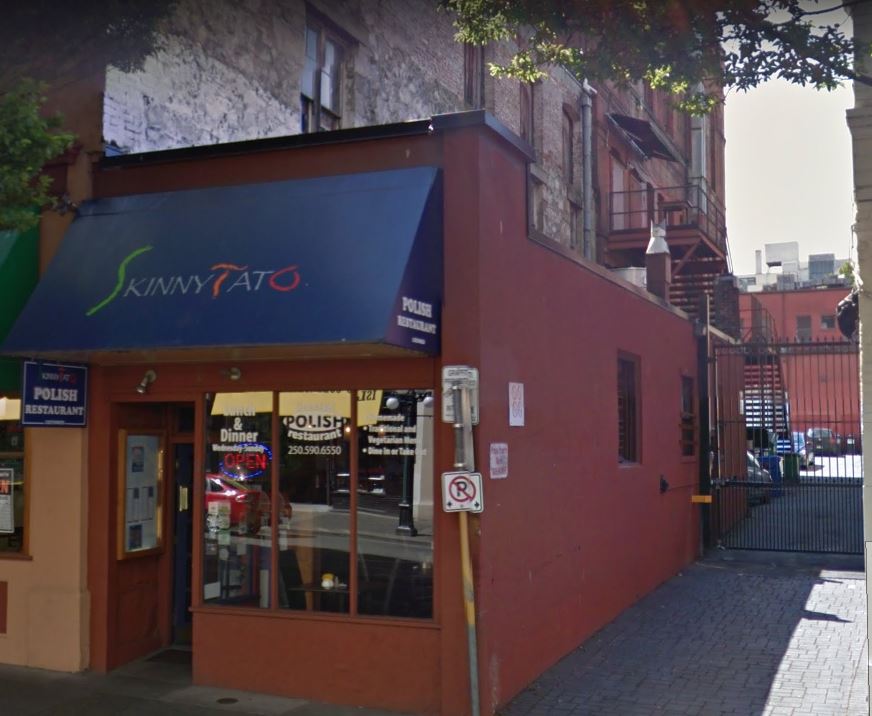 ...I imagine the cost of restoration/seismic upgrading of every building in Old Town is simply not feasible. There comes a point when new construction is likely the only financially responsible option.

For sure, and in Victoria that point was crossed around 1945 or thereabouts. That's why half of the old buildings and many of the grandest buildings are already long gone. Because it wasn't feasible to keep them.

Look, it all comes down to this: do Victorians actually care about the historic district's built form or don't they? If they don't care about it then lift the pause button and go right back to the post-1945 pattern of slowly but surely replacing everything. Install a few plaques here or there about how incredibly grand Broad Street used to be. As of right now, the west side of that block of Broad Street has a parking lot, a 1950s bank, the Duck building, and the stripped building on Johnson. Get rid of the stripped building on Johnson (instead of restoring it) and the 1950s bank becomes the second-oldest building remaining on that side of the block. The "old town" designation would become increasingly farcical. And as the "old town" designation becomes increasingly farcical, the rationale that it just isn't feasible to keep old buildings around will gain validity. It's an ideology that justifies itself and perpetuates itself.

Do people really want Johnson Street to be less like historic Johnson Street and more like the modern wing of the hotel on the other corner? I just can't believe that they do.