When did this version come about? 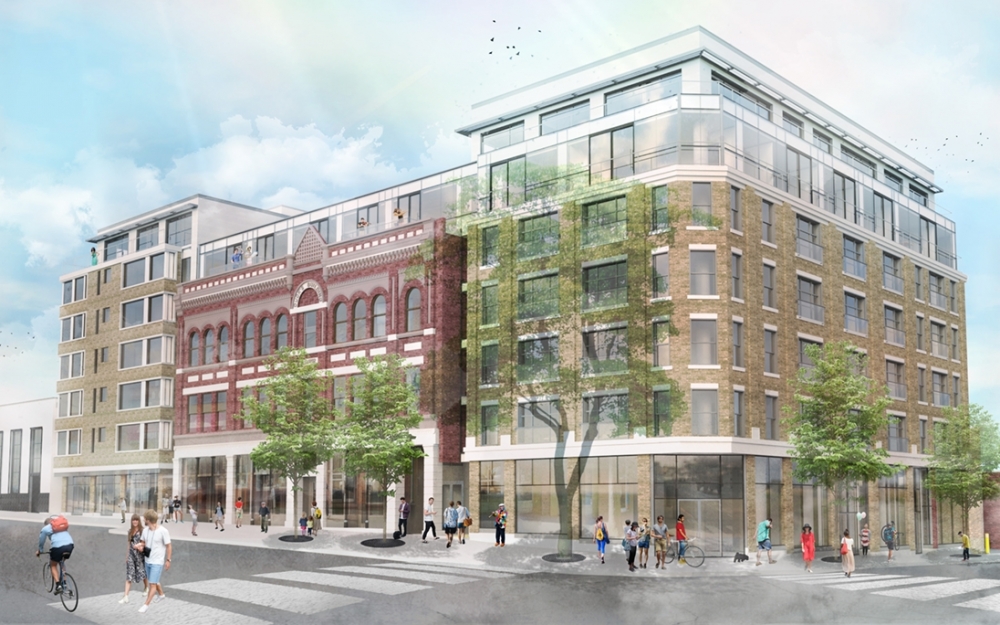 This project is starting to get the Northern Junk feel: each new iteration is worse than the last.

It seems like the architects are putting emphasis on matching the rooflines when they should be lining up the ground floor ceilings. It's that tall ground floor that defines the urban pedestrian realm.

This is what I'm saying. Imagine the top level of the left section clad in something interesting or otherwise having some panache* one way or another, and then extend that level down (tossing away the brick and such on the lower levels).

*Mike K'.s word of the month for January

...when they should be lining up the ground floor ceilings.

I don't mind them being irregular, but the super short one just looks very out of place.

It gets so many things right. It fits the old town context AND flaunts its own unique character at the same time. If you really want to boil down what new construction in an old district should be like, methinks that's it.

Love how the ground, middle levels, and top are all interesting. Love how the ground floor 100% respects the neighbourhood context and yet has its own individual character as well. It passes the "Why would anyone bother to take a picture?" test with flying colours.

This streetscape in Hamilton just schools Victoria, honestly. Which city would you think was more obsessed with its historic fabric?

Read this and weep...

While the facade of the original 1867 structure has been sandblasted and cleaned to reveal the old limestone, the building on the formerly empty lot has been clad in new, locally sourced limestone.

When asked about the etched frieze at the top of the limestone facade of the middle section, Kulakowsky smiles and becomes a bit wistful. “You know that saying ‘They don’t build ’em like the used to’? Well, we wanted to build it even better than that. Templar Flats will be standing long after we’re gone, but we wanted passersby to be able to look up at the building, and see something beautiful that our generation built.”

I think a big part of Victoria's current problem with heritage preservation, restoration and integrating new alongside the old, is that for decades now we have been told by the powers that be - including at least one member of CoV council - that nothing new can be as good as what came before. Our contemporary architecture has been dealt an inferiority complex.

For the section in the middle of the block on the south side of the Duck's building, why not emulate the kind of narrow facades that used to be on Broad Street back in the day? Look at how large the windows are on that one on the right side of the pic.

This is what I'm getting at when I say Hamilton is doing better work in this regard than Victoria is.

There's a big change coming down the pipes for this proposal.

I am almost afraid of what that might mean.

No drawings, but from the DRA May newsletter:

Chard Development and the University of Victoria are proposing a redevelopment and expansion of the Ducks building at 1324 Broad Street into a mixed use project that will include hotel, retail, restaurant, office and below-grade parking. The meeting is being held because the total floor area and the floor space ratio are significantly in excess of the Official Community Plan (OCP) and zoning requirements.

A Community Land Use Committee (CALUC) meeting will be held on Tuesday, May 13, at 6:30 PM, at the Ambrosia Centre, 638 Fisgard Street,  to discuss this proposal. We encourage interested residents to attend.

And a press release from UVic:

UVic Properties is partnering with Chard Development Ltd. on a new proposal for UVic’s Broad Street properties that would contribute to the vibrancy of downtown while providing ongoing revenue to support the university’s overall educational mission.

UVic Properties would retain ownership of the land under a long-term lease agreement with Chard, which is proposing a hotel development that incorporates the heritage of the historic Duck’s Building as a central feature. The proposal follows an earlier proposal in 2017 for condominiums and rental housing which was reevaluated and altered as a result of community feedback.
...
via  https://www.uvic.ca/...oposal-may news

Chard has an image that looks to be the exact same thing we've seen before, but with "Hotel" above the front door. Their press release is here: https://charddevelop...g-new-proposal/

A hotel seems like a good fit for this location.

I think we could get everyone to calm their tits if the upper floors on the north had a bit of a setback.

Otherwise we're back at square one with the criticism that the original Duck's building is being overwhelmed.

The left section has been distinguished and the lines are now vertical instead of horizontal. Bravo, I think that was needed. It looks more like old Broad Street now.

In my opinion the major points here should be:

1) the facades should look and feel like three different buildings,

I know you've mentioned it a thousand times but yes, verticality is key in Old Town. And the tall ground floors.

Horizontal lines have their place but many Victorians seem to think modern construction should have no vertical lines whatsoever. If an earthquake knocks down much of the old town and the only thing left are the deferential modern buildings and their horizontal lines, the district would have no charm at all. Modern construction should be modern but it should also follow the established formula. The formula is what makes the district special. Stick with the formula and the district will continue to be special.

If I had my way, the left section wouldn't look anything like the right section.

DRA won't support this no matter what if it is outside the OCP. You propose the Empress and it wouldn't matter. They have dug in their heels on two proposals based on this so even if they liked the proposal they are stuck with turning it down.

They have dug in their heals...

It makes me sick when they do that.