Dear Skater Dude Suspect,
On the day that this picture of you were taken, you decided that you’d use your skateboard for something other than cruising the mean streets of Saanich.
Should we tell Greater Victoria what you did? Ok then, well you decided to walk up to a vehicle parked at a red light on Gorge Rd West and smashed the windshield with your board. Seriously dude!
Sadly, for you, your skateboard won’t get you away from our amazing followers who will recognize you and then tell us your name, which will be ‘totally rad’.
See you soon DUDE!
Greater Victoria Crime Stoppers
If you know who this suspect is and you want to tell us his name anonymously, please click the ‘Contact Us’ button above, or call 1-800-222-8477. You may also submit a tip online at www.victoriacrimestoppers.ca
File: #21-21440

A Victoria man convicted of the 1987 murder of a 20-year-old Saanich woman has been denied day parole to attend substance abuse treatment in the Lower Mainland.

Scott Ian MacKay, 58, is serving a life sentence for the murder of Marguerite Telesford, whose body was never found. The University of Victoria education student’s bloody earmuffs were discovered on Mount Douglas Cross Road, along with a series of bloodstains, some hair, a spent shotgun shell and a pry bar. 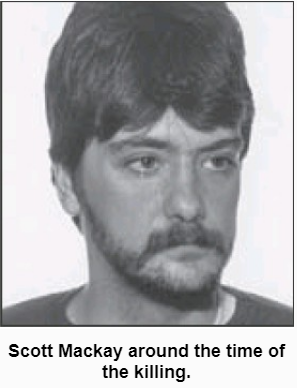 MacKay maintained his innocence through the trial, but was convicted of first-degree murder, later reduced to second-degree on appeal. He was sentenced to life with no possibility of parole for 15 years. MacKay applied for and was denied parole in 2004, 2011, 2013 and 2015.

The parole board’s decision notes that MacKay was on bail for sexual assault and unlawful confinement when he murdered Telesford. The decision also notes that the Correctional Service of Canada informed the parole board that MacKay is part of an ongoing investigation into another unnamed homicide. 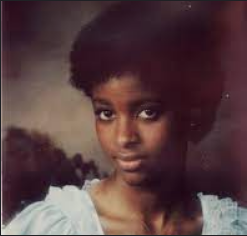 It has been posited that he could possibly enjoy a few years of freedom prior to his own death if he'd admit to the crime, and divulge the location of Marguerite.

But pontcanna's note above about a possible second homicide puts an entirely different spin on Marguerites murder, and poses quite a few new questions as well.

the case against him was not even all that strong. no DNA. no motive. no witnesses. no proven evidence. no body.

the case against him was not even all that strong. no DNA. no motive. no witnesses. no proven evidence. no body.

All they really had was one of her blue pom-poms (attached to the clothing she wore that day) wedged underneath his truck.

It's not much in terms of evidence ... but explaining how it got there was beyond the ability of his legal council.

His previous conviction for forceable confinement and sexual assault also indicated (if not motive) a predilection for this type of criminal behaviour.

they never found the pom pom on the first search.

there is much speculation that was planted. they “found” it a year later.

drive over a toque. then several hundred or thousand more kilometres and months later. try that a million times and I’ll bet you never get a pom pom stuck in your wheelwell.

It's pretty well established that he likely ran her over before he shot her, which would definitely present the potential for a piece of her clothing to get jammed up in the undercarriage of his truck such that it wasn't apparent on the initial search.

You and I have the benefit of hindsight here, whereas the Saanich PD at the time didn't even really know what they were dealing with ... only that she was missing, and a few of her belongings were scattered on Mt. Doug X Rd.

It's not a stretch that as Saanich PD realized what might have happened, they set upon a much more detailed search of his truck, and discovered the pom-pom.

Personally, I've never heard rumours of evidence planting in this case ... maybe I missed the reports?

my recollection is they never even proved the pom pom was hers.

and even though now they could DNA match the hair they found to her known hairs collected at her home, they have never done that test.

Here is some speculation:


was the blood ever collected and preserved and later DNA tested?  no shotgun was ever connected to MacKay?  no prints on the pry bar?

did the inmates that testified against MacKay actually reveal any details of the crime only MacKay would know?  I believe not.

and it seems MacKay has tried - even under hypnosis - to remember any details of the crime and he has been unable to.

Ahhhh, you're reference to the planted evidence was actually Mackay himself claiming the pom-pom was planted. But he was the only one suggesting that (along with a few conspiracy bloggers at the time).

More importantly, your speculation link does seem to require that one accept that the Saanich PD are complicit in railroading Mackay, a leap I don't personally choose to make.

I guess underlying all of this, and worth remembering, is that Mackay himself had admitted to assorted parole boards multiple times that he "was capable of killing her" ... but that he doesn't remember doing so due to the fact that he (claims) he suffered from lengthy black-outs at the time, during which he felt he would have been capable of murder ... but also during which he has no memory.

The record is also solidly established that he made reference to killing her multiple times to other prisoners ... prisoners who then reported those conversations to the authorities.

Regardless of doubts or conspiracies, the evidence was certainly enough to convict him to prison for life ... and he's all but admitted that he killed her.

All that's left is for him to do is to divulge the location of Marguerite.

Ahhhh, you're reference to the planted evidence was actually Mackay himself claiming the pom-pom was planted. But he was the only one suggesting that (along with a few conspiracy bloggers at the time).

More importantly, your speculation link does seem to require that one accept that the Saanich PD are complicit in railroading Mackay, a leap I don't personally choose to make.

I also agree that the speculation link is full of holes too.

I know the disappearance was on a Sunday morning (January 18, 1987).  There would be no school or classes to go to.

I actually believe it was Oak Bay Police that found the pom pom and hair.  Not Saanich.  At least according to this account:

The rape cases were soon connected and charges laid by both Oak Bay and Colwood.  Shortly after, an Oak Bay member reported a past connection between McKay and another woman who was known to have been abused by McKay. With McKay in custody, a work connection was then found between McKay and Telesford. Even at that, the case was stalled as Telesford’s body was not found and there was no physical evidence connecting McKay to the well-established fact she was murdered in the area of Mount Doug.

A few weeks later, after an investigative action was taken by the Oak Bay Police, a single clue, a pompom, physically connected a vehicle belonging to McKay, to the Telesford murder. That single clue was the key piece of evidence that led to the conviction on the murder charge even though Ms. Telesford’s body was never found. That single clue also stood the test of an appeal to the B.C. Court of Appeals and McKay remains in prison to this day where he is certain to remain until the day he dies.

was the hair found at the road ever tested against her own hair collected at her home?

It was more than a year before Victoria resident Scott MacKay was charged, another year after that before he was convicted of murder.

^ it appears that single hair and that pom pom was in the truck fender for over a year.  how likely is that?

^ it appears that single hair and that pom pom was in the truck fender for over a year.  how likely is that?

It he ran her over as suspected, and she went up into his wheel well in the process, probably very likely.

Don't forget that he's also stated multiple times that he accepts that it was his truck that was involved in her death (based on the pom-pom and hair evidence).

I think for all intents and purposes, it's pretty clear that he's admitted to the murder of Marguerite ... with the simple proviso that he can't recall committing it, and therefore can't offer up the location of her body.

For a narcissistic sexual offender and murderer, it's really the best outcome you're going to get short of an actual eye witness to the crime (or an outright confession).

What kind of a truck was he driving to have someone get stuck in a wheel well?

for a year. a single hair. stuck in the truck wheel well for a year. a hair never proven to belong to the missing person.

The continued detention of MacKay, now 49, is another marker in the tragic story of Marguerite Telesford, who went missing Jan. 18, 1987, while jogging in Saanich, B.C.

There was no sign of Telesford at the crime scene except for her bloody earmuffs, puddles of blood and a few hairs. Also found there were a crowbar and a shotgun shell. Telesford’s body was never found.

MacKay was convicted because a piece of crucial evidence, a blue pompom that was discovered wedged underneath his pickup truck. 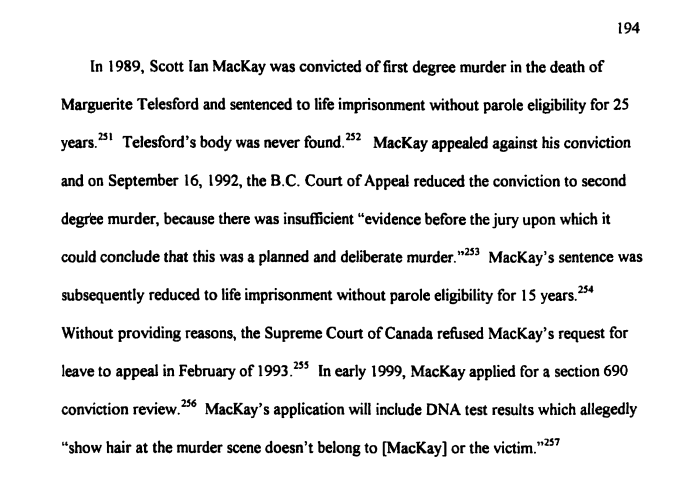 What kind of a truck was he driving to have someone get stuck in a wheel well?

No, not the entirety of her ... the pom-pom and hair evidence as part of her clothing.

If he ran her over and any part of her clothing was pulled in the direction of the rotating wheel and tire, the pom-pom from her hat or scarf (I know not which) could easily get pulled around the tire and get stuck in the wheel well.

Running over a person with a 3/4 ton pick up truck is likely a pretty messy affair, with things going all over the place ... especially when it's apparently followed up with a shotgun blast and possibly a tire iron.

(BTW, I can easily get under and up towards the top of my back tire of my F-150, where I've actually been in order to mount some rather large after market fender flares!)

That seems so bizarre. All sorts of road debris should be getting stuck in that fashion but it never does. It’s all rather odd.

I actually agree that some of the evidence details seem extremely slim, but that could be perhaps because the crime was committed what ... 3 decades ago?

A lot of what remains online leads one to wonder if they're reading anything even close to the actual evidence ... or just old newspaper articles repeated over and over again.

You'd almost have to have somebody of respected authority review and report on the actual evidence to actually get a firm picture of what put him away for life.

But as noted above, it may not be relevant as he's basically admitted to killing her, just adding that he can't remember doing it, and thus can't remember where she might be located.

i recall they once drained a blenkinsop valley farm holding pool looking for her.