72 replies to this topic

Many times we've talked about the "why would anybody bother to take a picture?" test.

Another test for old town buildings specifically would be: if there were several buildings like this in the old town, would it be good or bad for the old town atmosphere? Would the old town be more or less interesting as a consequence?

Similar to the earthquake test: if an earthquake knocks down the old buildings on either side but leaves the new building, would anyone care? Would it be any consolation to anyone?

...if an earthquake knocks down the old buildings on either side but leaves the new building, would anyone care? Would it be any consolation to anyone?

Anyone other than the people who happened to be inside it at the time, I mean.

The most inconsistent thing in the rendering is the suggestion that someone ever attached one of the green u-bikes to an actual bike rack. 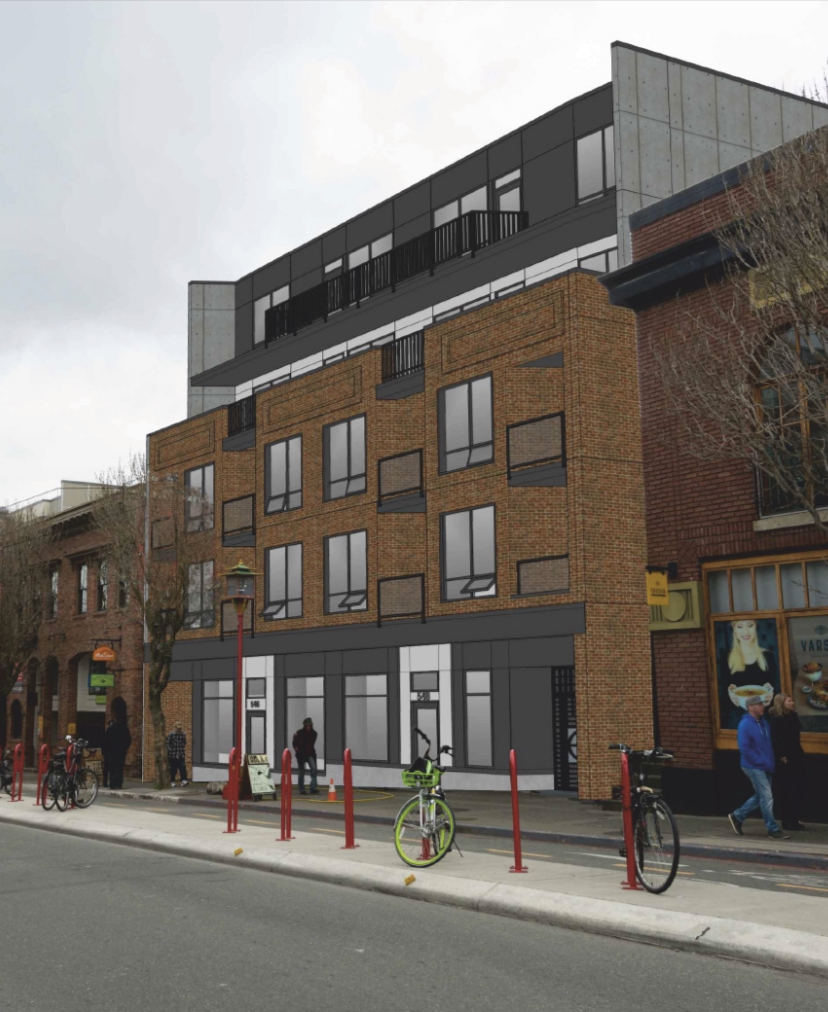 Maybe if the brick portion aligned with the adjacent buildings it might help. I'm not sure.

I get a bit of a Streetlink vibe from this design.

Dude, it's the same extended family. Same extended family as the (now modified and converted to residential) office building on the other side of Pandora and a few others. Does somebody push for this esthetic on modern buildings? If so, it's been going on for a few decades now.

I've ranted about this supposedly sensitive modern esthetic before. I give myself a point for mentioning windows in the comment below, because it's actually what comes to mind when I see the rendering above. The windows on the old building beside it have all kinds of personality. The windows on the new building are blah.

...do an interesting job of it. Don't just slap swaths of plain brick cladding on a box. Give it some vitality. Use different types and colours, maybe even (gasp) painted brick. And give some serious attention to the overall lines, the windows, the window frames, the balconies, etc. etc.

The ground floor (on the modern building at Yates and Broad) gets some of the fundamentals right. But I'm still inclined to lump it together with some other 1970s/1980s buildings that I generally don't like: Harbour Square, the Salvation Army, the office building on Pandora recently converted to apartments, the Capitol 6, the Waddington/940 Blanshard complex, and some others.

- these buildings tend to be almost comically overdone with one-note brick coverage (as if somebody had been searching for one attribute -- heck, one word: "brick" -- to summarize the entirety of Victoria's architectural inventory up to that point),

- the lines put too much emphasis on the horizontal rather than the vertical,

- the overall effect = squat, blunt, and bland instead of narrow, fine, and detailed

Yes, the brick was merely a means to an end. The material used to create that interplay of shapes. The most efficient way of manifesting the form and massing envisaged by the architect.

It's the difference between swimsuit model and a bolt of fabric. It's not the material alone that makes it attractive.

I now see it was posted earlier in this thread that redevelopment won't happen for another three or so years.

So the new Dumpling Drop restaurant has plenty of time.

The DRA has confirmed the following:

Creation of affordable housing units will be funded by BC Housing, but operated by Chinese Freemasons Housing Society.

This project was redesigned last month to incorporate some feedback from the DRA (including the replacement of hardi-plank with brick on the commercial level): 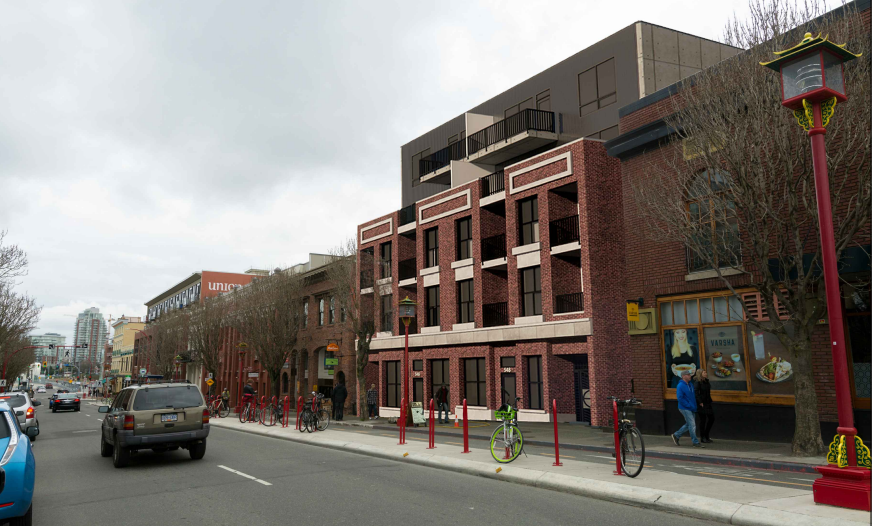 Still very simple but it looks a lot better along the ground. If the brick cladding is half-decently distinctive as compared to the buildings on either side then it should be okay. The featureless and characterless top levels are as lame and misguided and inappropriate as ever, but I think I've given up on the CoV ever coming around to understand this point.

I still feel like the character windows on the old building next door have been trying to get our attention, but nobody's listening.

Yeah, the ground floor is a lot better. I'm particularly fond of brick cladding but it does feel like a bit of overkill for that stretch. I think a lighter brown brick would be a bit better just to break that stretch up a bit.

But yeah, what's with the featureless box plunked on top?