You know, from some angles this building just looks odd.

They definitely made some odd aesthetic choices.

From today in Songhees:

Especially as the shadows from the balconies create some much needed visual interest on the western facade.

Maybe the rooftop will be a restaurant. We have had a good new rooftop restaurant go in since Corazon.

Pic by thegreatscaper at flickr.com. I don't mind HP2 so much from this angle. From this direction the major shortcoming might by how the clunky top spoils the refined top of HP1.

I'd say HP2 looks its worst from Store Street or otherwise straight-on from the west. From there I think the beige/black combo and the overall plainness could end up suggesting an unfinished building in perpetuity. It gives off some of the same vibe that View Towers was giving off all those decades before it was finally painted.

Viewing of HP2's bland, white eastern facade is no great joy either. It also completely obscures my view of the far more attractive HP1.

What does it say about the state of local residential development when even BC Housing can build something that is better looking than HP2? 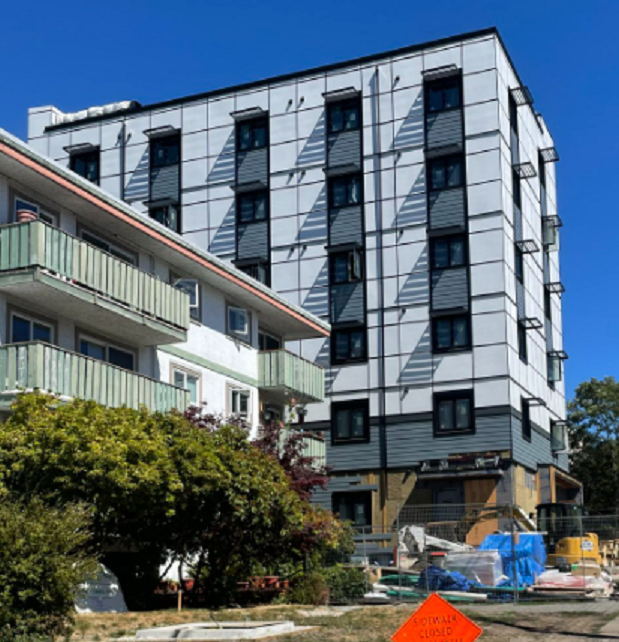 Oh I don't agree with that at all. HP2 is vastly more attractive than this building. The windows on here may be even a smaller portion of the facade.

With all of that black at the top were they trying to suggest the shadow of HP1? If so, I'd say that was a bad idea.

Virtually every esthetic choice made on HP2 was the wrong one.

The all-black cladding used on the top of the building was fine for the top two residential levels, but now that they've used it all the way to the top it looks really bland and ugly (in my opinion). I'm hoping that they're going to add some kind structural element to the upper portion so it's not just a wall of black. Right now it just looks off-putting and plain, especially when viewed head-on from the new Songhees park across the JSB.

Also, black is the worst possible colour to finish a building with if you're concerned about cooling and the heat island effect. It's also horrible because of all the Seagull poop it's going to show.

Oh I don't agree with that at all. HP2 is vastly more attractive than this building. The windows on here may be even a smaller portion of the facade.

I agree with NParker on this one - the BC Housing building on Yates is basic, but the proportions of the building are appealing and the choice of panelling is much brighter and vibrant than the white/beige/black combination of HP2. I would prefer a hip roof on the Yates street building, but I actually find the windows are not as small and prison-like than they looked in the renderings (and I've walked/biked past this project multiple times).

If you want to see a truly horrific stylistic choice, however, I'd advise you take a trip up to UVic and see the new student residence buildings. The finishings are so bleak and uninviting that it looks like an institutional prison from the 1960s/70s, complete with tiny windows. Add to that the giant metal screens they've added to the main windows facing Ring Rd on the second floor and some of the windows on the upper floors of the residential levels and it looks like a apocalyptic bunker.

Indeed, the UVic buildings are terrible. What are they thinking!?

I agree with NParker on this one - the BC Housing building on Yates is basic, but the proportions of the building are appealing and the choice of panelling is much brighter and vibrant than the white/beige/black combination of HP2.

Any guesses as to the day or the hour when it will be finished?

I really hope they do some other architectural feature at the roof or at least great lighting for night time. After a decent HP1, this is a huge disappointment.

In an unflattering light the west face suggests tar paper and unfinished drywall while the actual final finishings, window frames, etc. are on backorder.

I'll file this one as the predictable conclusion to an unfortunate trend that's been worsening for several years. Although I'm not sure anyone was expecting it on the Hudson property, after such a lengthy and heavily-scrutinized saga to finally get things to where they are today. CoV's design review processes, where are you?*

...I'm not sure I'm totally on board with the new square panel cladding look.

Methinks such panels can backfire when they have a dull finish or when the colour suggests sheets of carboard or some other ordinary/unfinished material. I like them when they're slick & glossy and showing off an unexpected colour... I'm not crazy about the panels on the Union.

Those grey panels just don't have any personality. We've talked about the potential menace of drab panels before re: the panels on the Union in Chinatown (they almost look like unfinished drywall).


The particulars are different, but once again we've gone full circle on a development/design issue even though a hopeful observer would have assumed the mistake could never be repeated:

Developer George Mulek has been asked by the city of Victoria to voluntarily reduce the size of the apartment-store centre, to be completed at View and Quadra, but there apparently isn't much likelihood that he will.

Mayor Peter Pollen said Wednesday that Mulek was "unbending" in his attitude, and seemed determined to stick by his original plan to build a second tower slightly taller than the 19-storey apartment building already at the site.

The grey, unfinished look of the first building, completed last year, has brought considerable criticism from the city.

Curious minds want to know: what would it look like if the Blanshard face of the tower were copied over to the west face?