sure I can agree with all that.

we are nowhere near being significantly worse than April though.

^But isn't there only 20 ICU beds in use for Covid patients?

Fifty-nine people are in hospital and 20 of them are in intensive care.

nobody wants to see that go up to 200 but what the heck were those 20 doing to catch it? they are all likely old and/or compromised so why the f*ck were they anywhere near the virus?


if I lived next door to an 80 year old couple I’d be doing all their public chores for them.

so we are doing quite well. 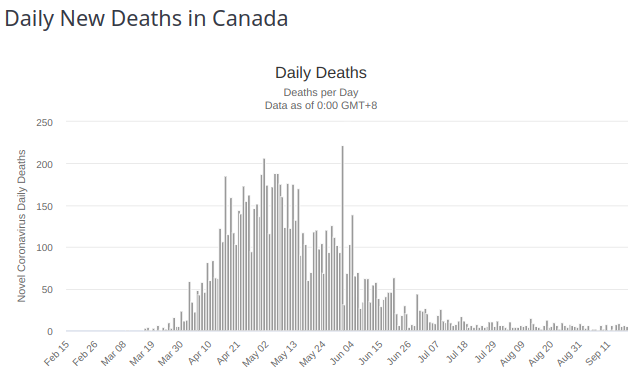 and now a look at the age of the deaths:

Nanaimo’s biggest mall has posted a letter at mall entrances and on social media saying it intends to make masks mandatory and require customers to take temperature checks starting next week.

According to a letter to customers on Woodgrove Centre’s Facebook page, masks will be mandatory and “temperature stations” will be set up as of Monday, Sept. 21. The letter, which indicates it’s from a new CEO and general manager, Bin Wang, is dated Sept. 11 but wasn’t posted until today, Sept. 18. The letter was also put up at mall entrances.

“As you have probably heard … our shopping centre has now become Central Walk Woodgrove Centre,” notes the Facebook post. “Our new management team has adapted the current health regulation from the Ministry of Health and complement some new procedures to ensure our customers’ safety. We hope you enjoy shopping at Central Walk Woodgrove Centre and have a wonderful day.”

New details surfaced on Thursday on an unexplained neurological condition that struck a volunteer who was participating in AstraZeneca's coronavirus vaccine trial.

In an internal safety report obtained by CNN, company officials describe how a healthy 37-year-old woman "experienced confirmed transverse myelitis" after receiving her second dose of the vaccine. She was hospitalized on Sept. 5.

The report describes how the patient had the first dose of the coronavirus vaccine in early June and was fine. She received her second dose in late August. While out running on Sept. 2, she "had a trip [not fall] with a jolt." The report noted that she did not have any obvious injury to her spine when examined, according to CNN.

The next day, the report said, she had difficulty walking, pain and weakness in her arms, pain and reduced sensation in her torso, a headache and reduced ability to use her hands.

The report mentions twice that the woman was diagnosed with "confirmed" transverse myelitis, CNN reported. The condition, which can be triggered by viruses, causes inflammation in the spine.

While the American Dental Association hasn't done a survey to verify an increase in dental problems since the pandemic started, reports of pandemic-related dental problems are common, and sales of mouthguards to prevent people from grinding their teeth are up.

"We can defer care for a while, but deferred care becomes critical care at some point. The bacteria don't know there is a pandemic," says Matthew Messina, DDS, a consumer advocate for the American Dental Association and an assistant professor of dentistry at The Ohio State University College of Dentistry, Columbus

A combination of delayed care and stress have led some dentists to see cracked teeth, sore jaws, and cavities, dentists say.

Stress can affect teeth, says Laurence Rifkin, DDS, a cosmetic and restorative dentist in Beverly Hills, CA, who treats Acosta. Rifkin says he's noticed more of his patients coming in with cracked teeth in the past few months. More are also complaining of sore jaws, he says, perhaps from clenching or grinding.

U.S. adults increasingly experienced symptoms associated with acute stress and depression as COVID-19 cases and deaths skyrocketed between mid-March and mid-April 2020, according to a study of more than 6,500 people from three large, nationally representative cohorts. These symptoms were related to preexisting mental and physical health conditions, as well as secondary stressors such as job and wage loss. Acute stress and depressive symptoms were also related to greater COVID-19-related media consumption, a general increase in media consumption during the outbreak, and exposure to conflicting information in the media about the outbreak.

China is willing to work with the international community including Canada, to make positive contributions to containing the pandemic at an early date, spokesperson Wang Wenbin said.

Wang made the remarks at a daily press briefing when asked to comment on Hajdu's remarks in a recent interview, which recognized China's efforts in informing the World Health Organization (WHO) of the emergence of the novel coronavirus very early and sharing its genetic sequence, enabling other countries to carry out testing quickly.

Trump administration officials at the Department of Health and Human Services reportedly bypassed career government scientists and authored the significantly relaxed coronavirus testing guidelines that experts criticized as medically unsound and dangerous when they were first published on the CDC website last month.

The New York Times reported late Thursday that the revised guidance—which says people who have been exposed to coronavirus don’t necessarily need to get tested if they are asymptomatic—were posted online despite “serious objections” from CDC scientists. (Update: On Friday, the CDC reversed the testing guidance, saying in a new document that those who have been exposed to coronavirus “need a test” whether or not they have symptoms.)

“The Department of Health and Human Services did the rewriting and then ‘dropped’ it into the CDC’s public website, flouting the agency’s strict scientific review process,” according to the Times, which cited anonymous officials familiar with the matter.

One unnamed federal official told the Times that the revisions “came from the top down, from the HHS” and the White House Coronavirus Task Force headed by Vice President Mike Pence.