No parking is required? Interesting.

...There will also be a "community plaza" at Cook and View in response to comments from the DRA.

A possible sneak peak on Sakura's website? This building appears to have Pluto's logo on the side....

Question now is whether Pluto's has a spot in the new building, or if the signage is being retained as a branding component.... let the speculation begin!

That's Tara Place next door in the rendering. I'm sure they would love Plutos as a tenant if they could afford the new lease.

I think the building's look has to be on the wild side with Jukebox and Mosaic close by. This is no neighbourhood for the conservative look.

definitely on the wild side and agree that it fits in with the neighbours.  The no parking requirement is part of the R 48 zoning but that also restricts building height to 10 storeys.  They may need to do some horse trading to get a 50% increase in the number of storeys but 41 stalls might get them there with the current council.

With Tara Place and Jukebox being very close to the same height this site desperately needs some additional verticality.

As far as I can tell, the Pluto's project doesn't include the affordable-rental component, but I don't believe that this city policy applies as a rezoning is not required.

Will be interesting to see of certain members of council dig in their heals on the variances to get some affordable rental component?

Victorians have a lot of old wounds re: development controversies. 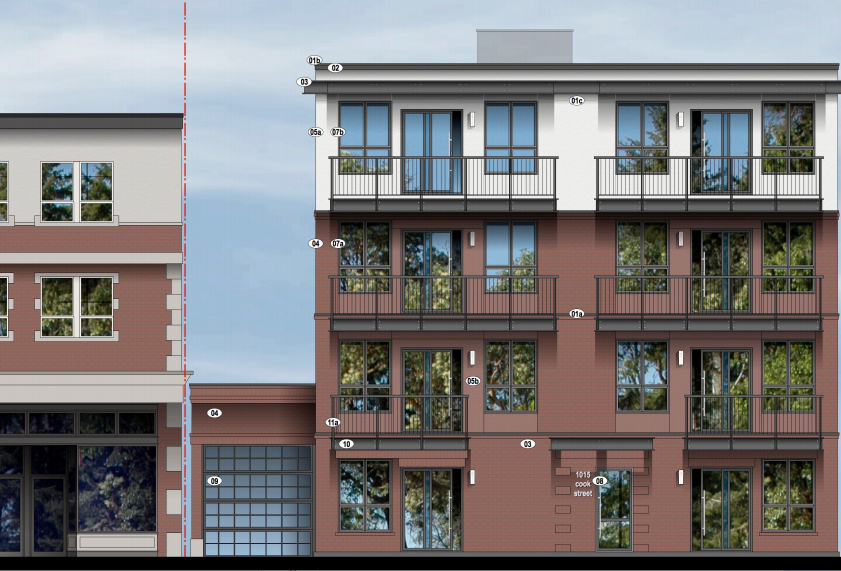 As they say on the decorating shows, "it's a bit too "matchy-matchy".

Come on. That looks so generic. At least the previous version was making an effort to belong by having a touch of personality.

IIRC this project also  'lost a storey', perhaps due to vociferous opposition from the townhouse development residents on Meares ...

The earlier proposal had 30 studios and a single 1BR unit. Studios were 390-480 square feet, so the developer has opted for fewer but larger units. If Victoria is anything like the mainland municipalities, a proposal with no 2 or 3BR units would not be supported.

I think you may be looking at the wrong plans.  The original proposal from October 2018 was for a rezoning to allow for a 4 storey, 14 unit strata building.  That proposal was revised in July of this year to a 5 storey, 31 unit rental building.  The development tracker is showing a Development permit with variance was applied for yesterday but there are no new plans included with that application but the title says it is for a 5 storey building not 4.  It also links to the original rezoning application with both the Oct 2018 plans and the revised July 2019 plans which suggests the proposal is still for 30 studios and 1 -one bedroom unit over 5 storeys.

The City is considering a policy for all new multi unit developments to include some percentage of family friendly 2 and 3 bedroom units.  If they pass such a policy, that may cause the developer to revise his proposal but it doesn't appear that he has done that as of yet.