Probably not they did mention specifically the "doomsday crowd" in Murrica were buying up everything in sight - anything related to survival gear was flying out of US warehouses and off US retail shelves due to Covid initially and then of course especially since the "socialist" Democratic victory in November. Chinese goods OTOH appear to be plentiful. They won't need to dominate the globe militarily they'll do it economically....

Yeah, I dunno. I don’t think there will be many gun owners racing to buy Chinese ammo from Island Outfitters.

SKS rounds probably if the same as the Chinese crates Cabela's sells. or used to anyway

The Yanks are gobbling up the supply.

Yeah, I dunno. I don’t think there will be many gun owners racing to buy Chinese ammo from Island Outfitters.

Sadly the place was dead and is (unfairly IMO) gaining a bit of a rep for not having sufficient stocks of, well...everything. Not their fault they opened up in the midst of a pandemic and supply chains are shot, but the fact is they are suffering. While they might have a particular style of Simms waders or boots for example, its highly likely they don't have your size, having literally at most one of each.

Ditto for lure waist pouches and for actual popular lures, one of which I specifically mentioned to them in November and which I know they ordered when I was standing there. Two months later...nothing. And it is a Chinook KILLER; I nailed two slabbies on the Campbell River with it in October and hooked multiple others which I couldn't land. I couldn't keep them off my line. For over an hour that day it was literally tie on lure, cast once...BANG! Rinse, repeat. I would have bought half a dozen of them today if they were in stock. No dice and they've no idea when or if they will arrive any time soon.

I can’t help but think the government is buying up supply.

Of Chinook killer lures? I think they have other fish to fry.

Last weekend I happened to be up island visiting a pal in "x"; we took a drive to a local river which I'll call the "y" river, walked a couple hundred meters along the bank to the east crept out onto some large boulders and lay down prone, scanning the river as a potential place for our fishing gang to drop some lines.

Lo and behold not ten minutes elapsed when a large school of steelhead showed up gliding along like silent torpedo's, hiding in the shade of the very boulders we were perched on - perhaps four or five meters at most away. My buddy was so excited I practically had to sit on him to keep him from jumping into the river. At the same time I could've sworn I heard a choir of angels break out in song: steelhead are like unicorns for west coast and especially island fishermen. They are the most sought after and prized fish renowned for their legendary fighting ability. I think we both just sat there with our mouths hanging open in amazement.

Once upon a time before we started to really exploit the resources on this island they were quite abundant, but today many of the famed steelhead runs are either nonexistent or a mere shadow of their former glory, primarily due historically to unsustainable logging practices.

Tomorrow we're going to head out to that spot early_early and see if we can't entice a few of these beauties onto our lines. I've yet to ever hook one myself so I'm hoping unicorns do in fact exist.

Is the steelhead fishery all catch and release?

Is the steelhead fishery all catch and release?

The quick answer is "it depends" - on the run (which river) mainly; due to heavy pressure on this fishery in populated areas as a result of everything from a warming climate to the aforementioned destructive forest practices resulting in habitat destruction, steelhead hatchery programs have been set up so anglers can retain some of these prized catches, although offhand I don't know a single BC angler that does, at least one who understands the importance of this species to the province.

If there was ever a poster fish for "catch and release" this one is it.

A juvenile steelhead raised at a hatchery has its adipose fin clipped before being released so when it returns as an adult, a healed scar can be found at its adipose region. This is the key feature used to identify it as a hatchery marked steelhead which can be retained under certain circumstances in some fisheries. Angler Rule # 1 is always check the DFO regs because they can and do change frequently: "I didn't know" is no excuse and more than one angler has had the boom come down on him or her in the form of heavy fines  because they failed to consult the regulations resulting in them "not knowing".....

Well...."duh".....anyone who fishes and I mean really fishes in the back country particularly could have told you this 15, 20, 25 years ago.

In the last decade of fishing both popular, generally accessible rivers and also in some of the most remote and least accessible ecosystems on the island and north coast I've encountered one - one - contracted resource performing a fish count. And without accurate data how in hell can realistic, reasonable and sustainable catch limits be implemented that ensure the long term health and survival of the species?

"Finally" - a Canadian oversight and policing agency that tosses aside the typical and lame "nice guy Canadian" schtick and instead quite rightly throws the book at these criminals: and that is what they are - reporting matters, and these 3 clowns are not anglers - they are poachers, plain and simple:

"Finally" - a Canadian oversight and policing agency that tosses aside the typical and lame "nice guy Canadian" schtick and instead quite rightly throws the book at these criminals: and that is what they are - reporting matters, and these 3 clowns are not anglers - they are poachers, plain and simple:

The three individuals, none of whom are from B.C., pleaded guilty to a range of unspecified charges in Campbell River Provincial Court on Feb. 24, 2021.

were they americans?  that would be a tough boat to sail back to edmonton. 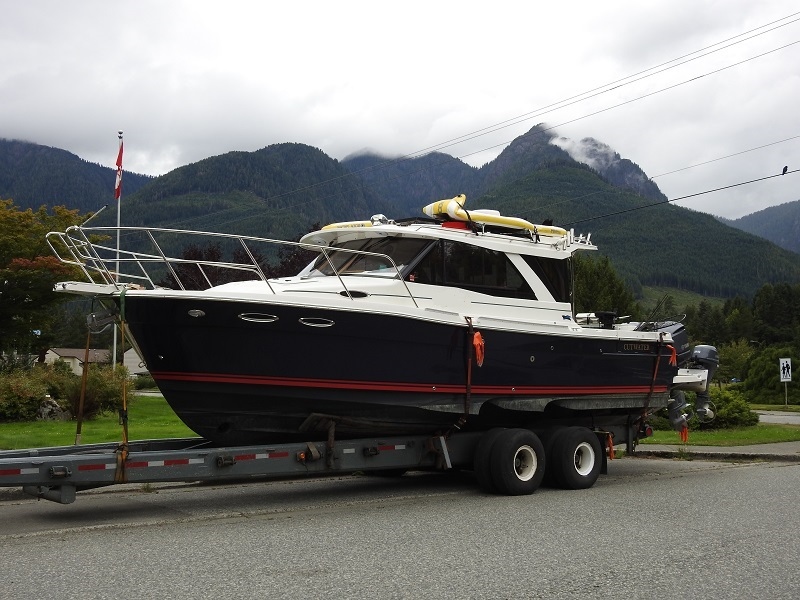 With the right rig you could tow it; the article doesn't say where the're from and I really don't care as long as they are permanently banned from fishing in this country. No licenses? 26 Chinook? Inexcusable. They should've sent the navy and given those old subs some torpedo practice time......

Shouldn’t that boat be sporting a registration number?

Why aren’t they named?

Global confirming tonight the 3 poachers were Murricans from Washington State.....

Interesting as that boat has a Canadian flag

Interesting as that boat has a Canadian flag

Where do you see a Canadian flag? The only one I see is on the flag pole in the background.

A red and white thing at the bow anyway