The state of architecture/design in Victoria

...during the past 20 years, there has been an incredible number of highrises built...

Actually, the phrase "during the past 20 years, there has been an incredible number of highrises built" would probably be less applicable to Victoria as compared to almost any other Canadian city.

“What we’re getting is one building after another that basically all look the same,” said councillor Pamela Madoff. “I’m really fearful in thirty years people are going to look back and say “what are you thinking?”

...the city has an open, airy feel. The architecture of Victoria highrises is such that none look like a solid block of concrete...

Victoria’s buildings have large balconies, are stepped in various ways, with urban gardens at different levels, so the landscape flows. Most also have street-level businesses...

The Skyscraperpage fanboys drool over London highrises but no tourist in their right mind would deliberately go into that area of London to enjoy the ambiance. It has zero charm and from the sidewalk feels like any other big city.

I've said it many times but Victorians don't seem to realize that their city ended up finding its own modern architectural/urban identity. Stay the course, it's working. By now we should be absolutely certain that the endless fretting about one bad step possibly ruining everything was never justified. Don't fight new pieces that would fit the formula (like the more refined versions of the Northern Junk proposal). Encourage more of the stately-but-modern esthetic that Victoria wears so well (that London writer seems to be referring to buildings like Aria, Shoal Point, Swallow's Landing, maybe even the Falls, etc.). When building taller, encourage smaller footprints like we've seen with some of Chard's buildings, Legato, and Hudson Place One. Allow some goofier stuff here or there just to spice things up a bit. And don't cheap out.

I've said it many times but Victorians don't seem to realize that their city ended up finding its own modern architectural/urban identity. Stay the course, it's working. By now we should be absolutely certain that the endless fretting about one bad step possibly ruining everything was never justified. Don't fight new pieces that would fit the formula (like the more refined versions of the Northern Junk proposal). Encourage more of the stately-but-modern esthetic that Victoria wears so well (that London writer seems to be referring to buildings like Aria, Shoal Point, Swallow's Landing, maybe even the Falls, etc.). When building taller, encourage smaller footprints like we've seen with some of Chard's buildings, Legato, and Hudson Place One. Allow some goofier stuff here or there just to spice things up a bit. And don't cheap out.


Where does promontory and encore fit into that

I'd say Promontory is a great example of modern-but-stately.

Seriously, I don't even know how people can tell these new buildings apart. They all look identical. 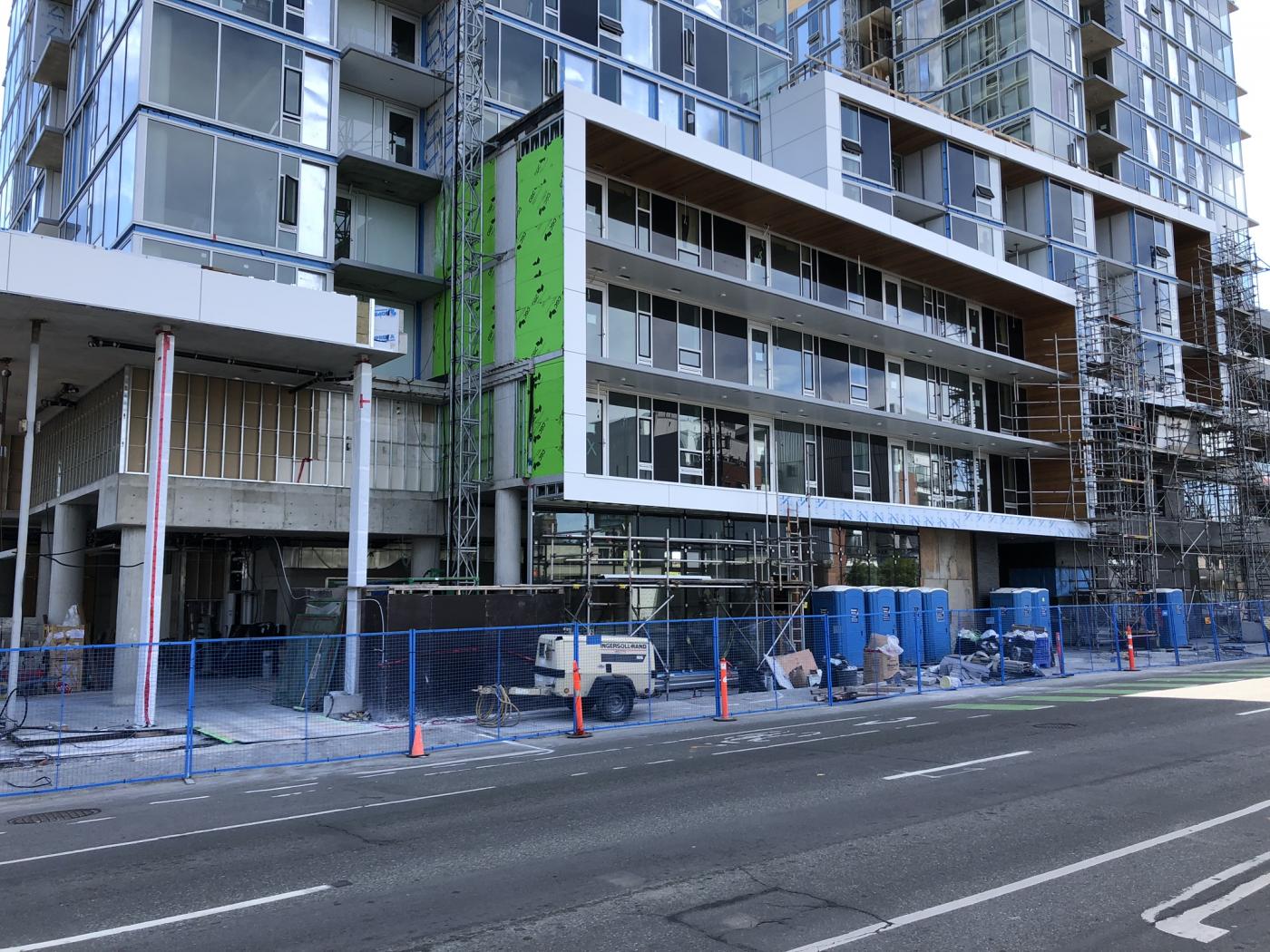 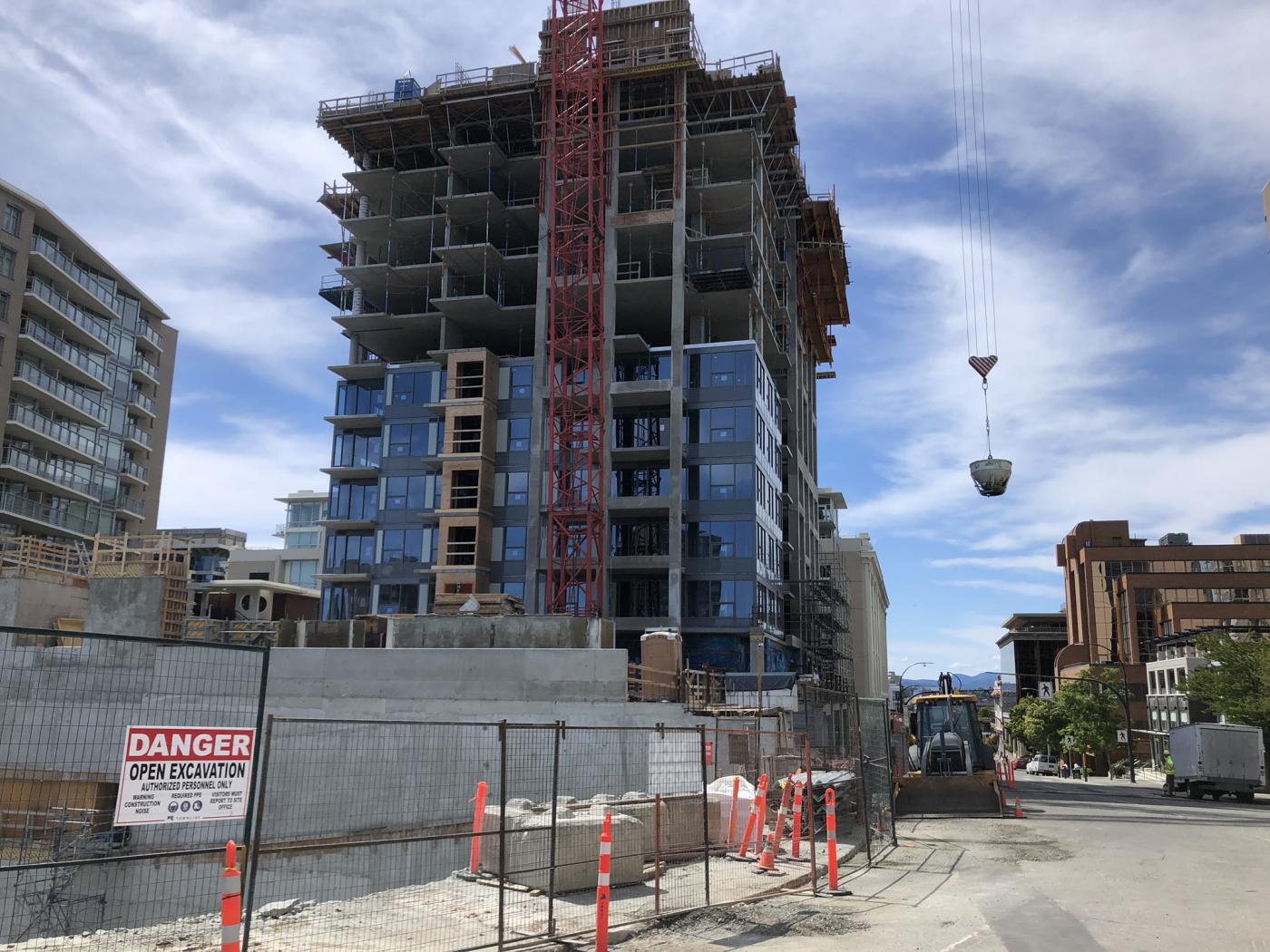 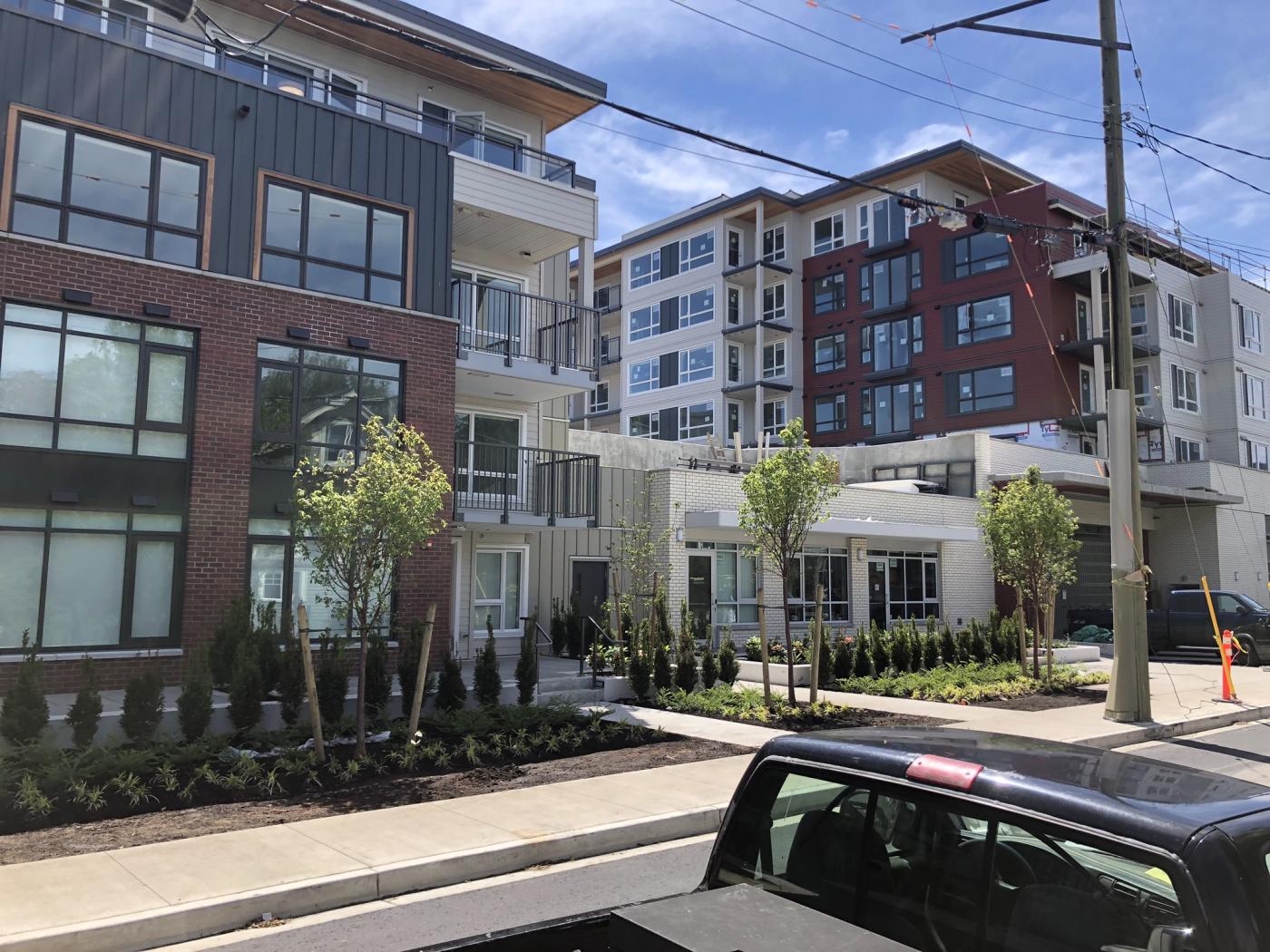 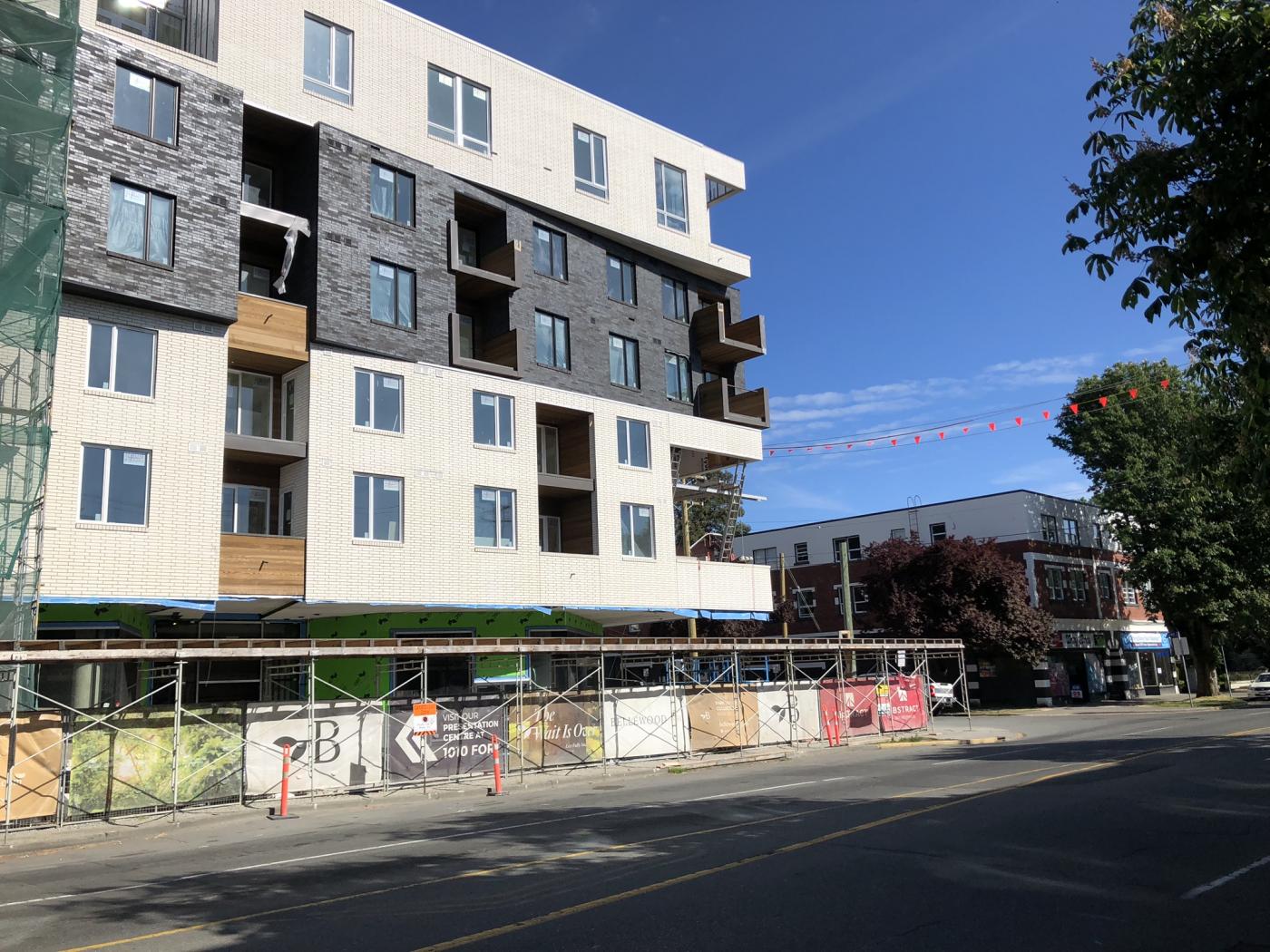 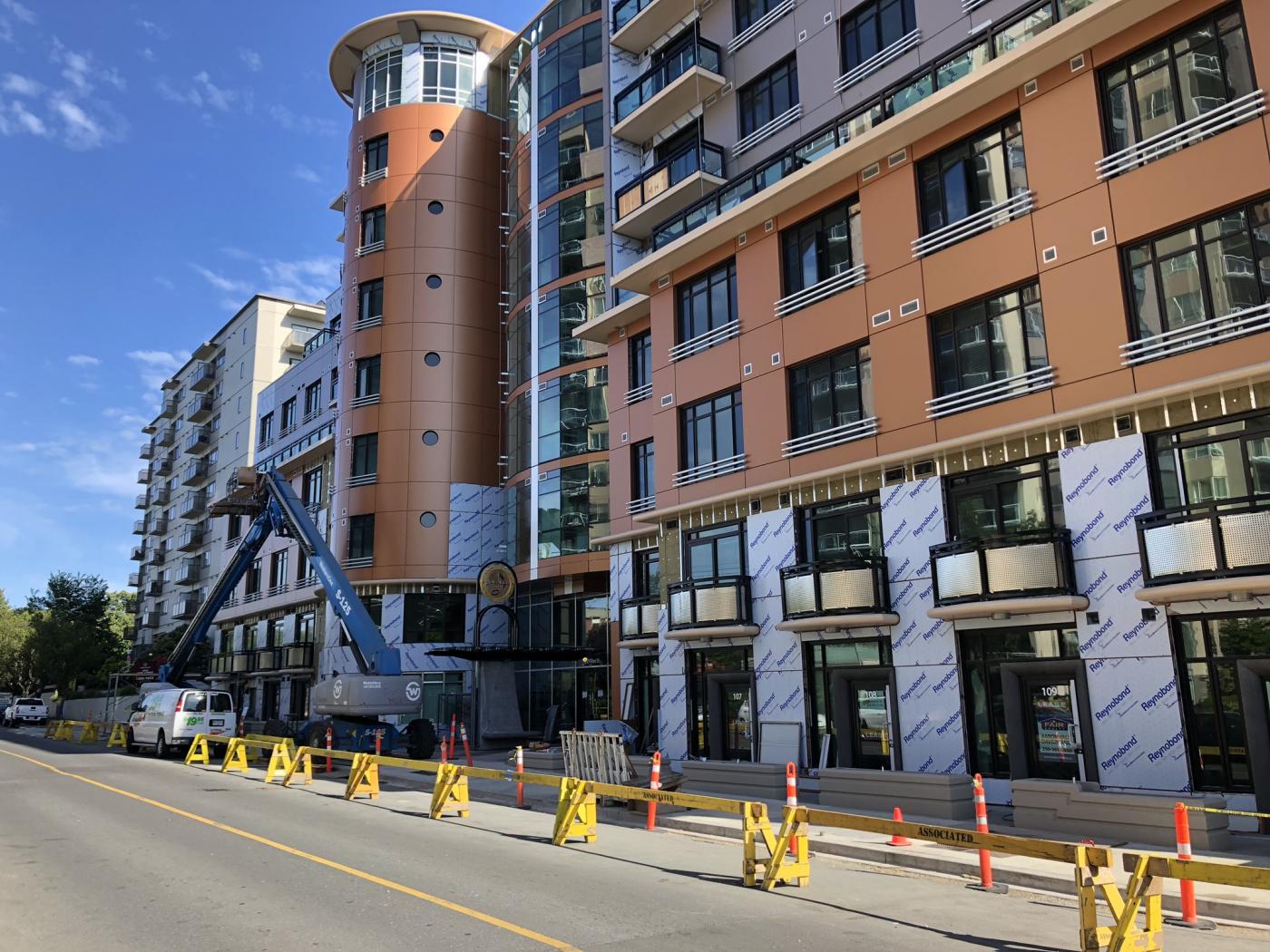 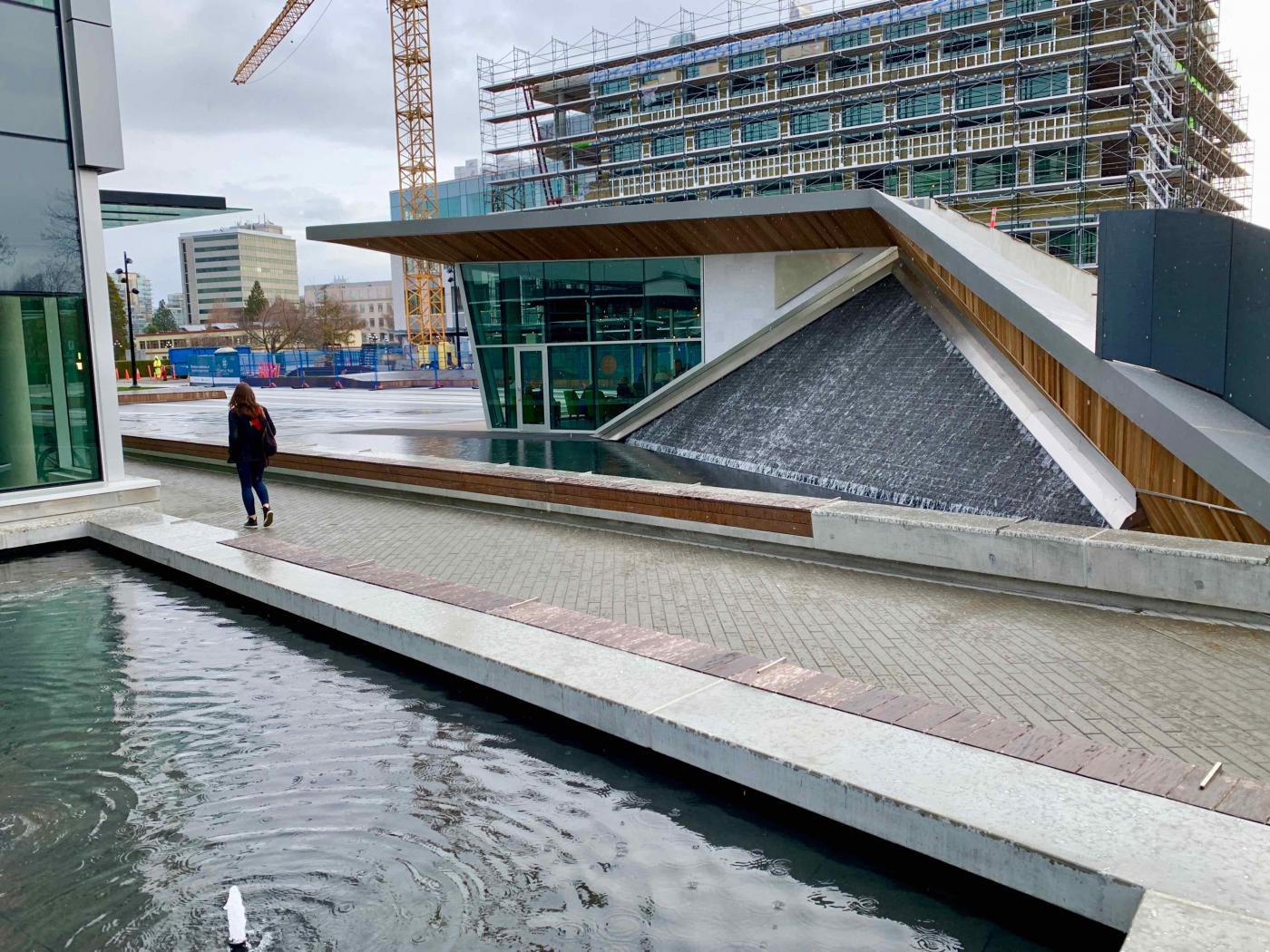 Speaking of Toronto lowrise and midrise architecture, love the lower 7 or 8 floors of this one. Put it on the empty lot on Douglas across from White Spot: I also like the brick warehouse vibe of this next one, but methinks the design is more suited to a building not so large. Give me a less wide 6- or 7-story version in downtown Victoria pretty much anywhere.

New houses like this one are conspicuous for their absence in Victoria's older neighbourhoods.

Not Victoria (the video focuses on the UK) but I found this to be an interesting video on new construction methods, design choices, and architecture trends in delivering more housing units in urban areas. (22 minutes long, high production quality)

There was some discussion in the 200 Cook Street thread about siding on multifamily projects...

In another thread I hoped goofy siding wasn't becoming a thing, but it seems to be becoming a thing. The Mason Street project, Capital Park, and now this one. It looks very out of place.

Let's hope it's a thing with a very short lifespan.

That awful vinyl siding crap has shown up at the Capital Park project too. It looks terrible.

I'm sure you'll find goofy siding here and there on some older buildings, but on high-profile new buildings you normally wouldn't aspire to that sort of stuff.

Well, driving home last night I noticed a couple new-build towers in Vancouver that are completely covered in horizontal siding 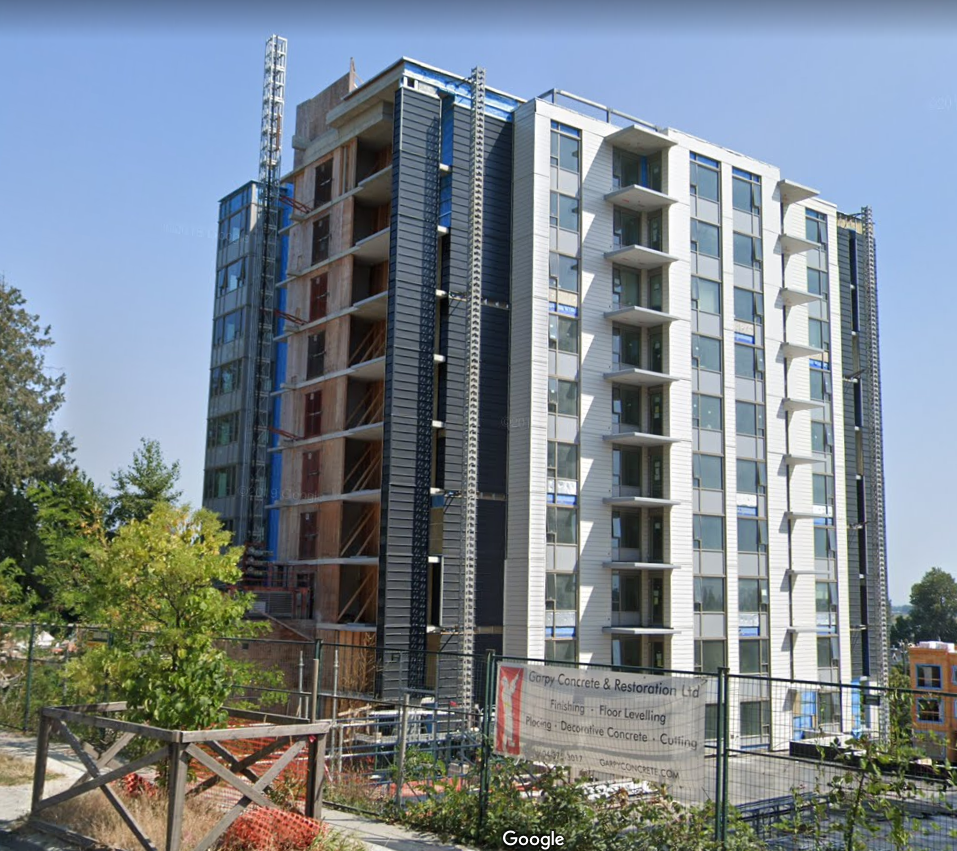 I gotta say, I'm glad this didn't happen (even though the city is still desperately lacking in the auditorium department... it's practically a crisis):

Victoria residents were 10 to 4 in favor of building a $4,245,000 civic centre, in a quick poll taken by The Colonist late yesterday.

...for a dome-shaped auditorium and new civic administration building on Cathedral Hill.

"Victoria should have an auditorium and I like the idea of having it associated with the city hall."

"We should have an auditorium. It's difficult to think of decent arguments against it. It would be quite ridiculous to stay as we are without them."

"Holy smokes, not again! That's too much, we have have to pay a lot of taxes now."

"Definitely not. We're paying $258 a year on our place, and I figure that's enough."

"We certainly need an auditorium as long as it doesn't prove a financial headache like the Memorial Arena... We don't like to see our taxes raised, but if it means an auditorium it may be worth it."

"I'm all for culture and progress, but I think they should clean up more urgent matters first. Our street is a mess."

"They already raised taxes once last year. I would like to see an auditorium, but I don't see why it should always fall on the taxpayer." 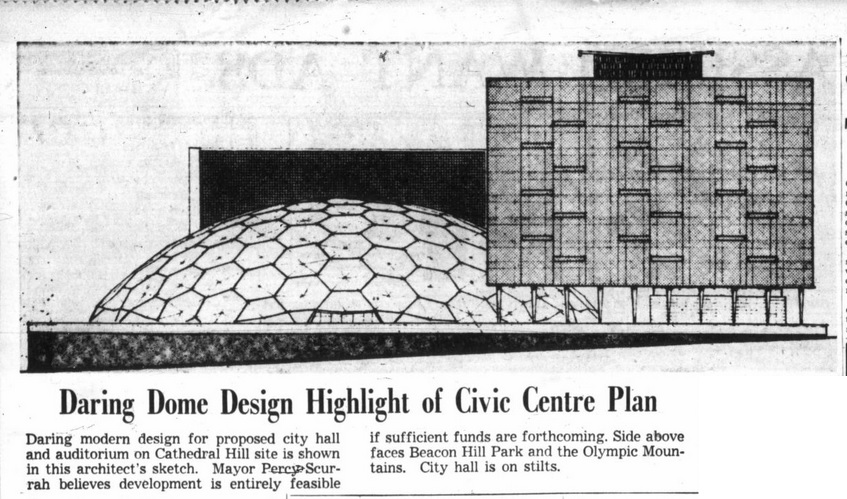 They loved putting things on stilts back then. Ground floor retail was so 19th century.

So instead we got that abomination that is the Court House.

So is that the site of the dome? The current courthouse?

The Cathedral Hill plan is talked about in "Unbuilt Victoria" by Dorothy Mindenhall (p30-33). Apparently it would have been a joint thing between the province (for the new courthouse) and the city.

(...in 1957...) The Capital Region Planning Board had grand plans for this large, nearly three hectare site, and couched its report in equally grand prose suggesting that Victoria should follow "the great capitals of the world" in creating a civic centre with imaginative design and an appropriate site.

The site was large enough for ample landscaping and a civic square...

The addition of city hall, the land registry, and the courthouse would establish a civic centre with a grandeur that could not be duplicated if these facilities were scattered throughout the city...

If you're not familiar with the urban revitalization concepts of this era, you might want to brace yourselves before you read the following shockers:

Courtney Street was to be closed...

Most of Broughton Street was to be closed as well, allowing services like the parking lot to be relatively obscured at the edge of the site.

Always with the street closures. Just imagine if every envisioned street closure had happened as planned: several blocks of Government, View, Broad, Broughton, and Courtney, not to mention the blocks of View Street that did get closed in order to create Bastion Square and the block of Cormorant that did get closed in order to create Centennial Square. Bastion Square worked out well, don't misunderstand me, but I'm just saying more is not always more. Were they trying to set a world record or something?

Anyway, the book says the province found funding for its pieces in 1957 but the city did not, so apparently this 1959 domed concept was the city's second effort.

The book contains a pic of the model for the development. A large parking level has been dropped from the sky right across Broughton Street, seemingly covering both the Escher site and the old building immediately east of the Royal Theatre.

Methinks this project would have been a disaster for the neighbourhood if not also for downtown as a whole.

Okay, all of you brick fetishists out there. Columbus, OH seems to have Victoria soundly beat re: being self-conscious about using brick in new construction. And their best examples are really good, I think. Check out some that I thought were interesting:

This one is quite plain but I really like that arch and I'd say the windows are exactly right (especially the differentiation of the ground level from levels above, with tall and narrow along the ground). There's also some very subtle ornamentation in the brickwork that really sells it.

This one exemplifies that modern-but-stately esthetic that I like, and -- unlike many other new buildings in the immediate area -- it doesn't look faux. Again, great windows. And check out the treatment of the entrance on the long side.

This one gets the narrow windows right along the podium, and even though the esthetic of the upper levels is all about the 21st-century, it all comes together because the narrow windows continue right to the top (the illusion of double-height windows emphasizes the narrowed effect)

If this building were in Victoria those metal window dividers (or whatever they're made of) would probably be covered in brick as well (or maybe painted concrete).

Some people might complain that this one looks faux on the podium level, but I'd file it as a success. It looks neither cheap nor hokey. Also, not only is the tower portion a complete stylistic departure from the ground level, but it's also covered in black brick even though red brick dominates the neighbourhood. Are you allowed to do that?? Looks great.

Things don't have to be repetitive and monotonous or an overload of one basic flavour...

This one is like an enlarged/extended version of the building that previously occupied the site. When Victorians are yearning to do yet another demolition, would they ever dare honour the lost building in the new one? (Oak Bay Avenue project, I'm looking at you. It would have been a great opportunity.)

Too faux? I suppose it is on the upper levels, but damn, that ground floor is fantastic. Imagine building some new ground floors like that in Victoria. Heck, imagine repairing some of the botched old ground floors in that manner (700-block Yates, I'm looking at you)

This one has some of that blocky/heavy faux-ness that you often see in new buildings that try hard to "fit in", but I really like those dark upper levels and the balcony railings. Give me some of this good stuff in Victoria's old town and in the neighbourhoods, too. (Just ignore the lame sections on either side of the dark middle section.)

How about a brick tower, like Le 450 Sherbrooke in Montreal? For better or worse, it's certainly a statement building! 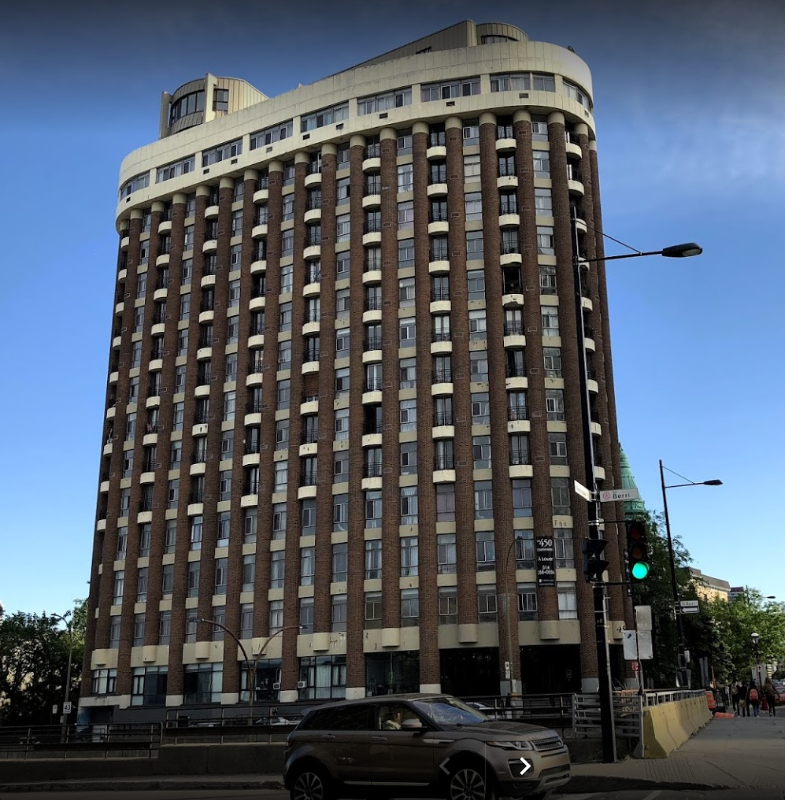