Famous people from or currently live in Victoria (CRD)

Mind if I take a crack at this? I will most likely mention names people have said already:

People from or lived in Victoria

Actor known for the series The Edison Twins and is voice artist for many animated series including Mike the Knight. He also wrote the play "Napoleon". Former student of St. Michael's, he received his big break in the Paul Almond film "Ups and Downs" AKA Prep School.

Television actress and director got her start with Sabiston on the film "Ups and Downs". She's starred/starring in Station 19, NCIS, Suits and directed episodes of TV series like Lost In Space and Murdoch Mysteries. She also is a former student of St. Michael's

Maybe to some not as internationally known but this man (born in 1925 and died in 2000) had a huge amount of work in theatre, radio, TV and film (more than IMDB credits him for). He played Dr. Foy in the 1957 film Time Lock, host of the children's series Captain Peter & Timothy T and founder of the Bastion Theatre among other theatre groups. He mentored Actors like Barry Flatman (another who I believe is from Victoria) and Andrew Sabiston (although this is disputed by actor & teacher at St. Michael's, Colin Skinner).

Peter was working on a book before he died about all the wonderful and interesting people he had the pleasure to work with. Last heard it was over 300 pages and I believe it is now in the collection at the University of Victoria along with all the audio recordings of interviews he made with people involved in Canadian theatre, TV and film over the 20th century.

Actress of Hollywood films like Mr. Broadway (1933), she was best known as Mary Livingstone on the Jack Benny Radio Program with her real life husband Jack Benny. Now I know it says on the net she was born in Seattle, raised in Vancouver and died in California but if I recall correctly she lived out her last years here in Victoria according to the book "Entertaining Canadians" (published sometime in the 1980's or 90's). This could explain why Jack Benny was a customer of Roger's Chocolates and Jack Benny Radio announcer Don Wilson would fly in for his fishing holidays here.

Kurt Russell/Goldie Hawn - Was said they had a home on Salt Spring Island and that's where they stayed when they filmed "Bird on a Wire" in Victoria.

Patrick Stewart - Was also rumoured he owned a place on Salt Spring Island but nothing else was heard.

Robin Williams - Bought a seaside property on Salt Spring Island and had a 3 storey home built. He was once told in the local convenience store in the town of Ganges they weren't a library and was he going to buy the magazine he was reading (it's a story everyone there tells).

Sylvester Stallone - Rumour he owned a home somewhere off the Pat bay Highway.

Burton Cummings - Owned a home in Deep Cove and would occasionally come into the Great Canadian Casino that was on Douglas and Finlayson to gamble.

George Pan Cosmatos - The director of Tombstone died in Victoria and had lived at 2910 Seaview Road. That's probably why that address has a fence line and no one else does, to keep out the nosy fans.

Sebastian Cabot - Another actor who lived and died in Victoria.Known as the narrator of Disney's Winnie the Pooh and was the voice of Bhageera the Panther in the 1967 film Jungle Book.

???? - I'm sorry but I've forgotten this gentleman's name but Charlie Chaplin's silent screen stunt man lived out his last years with his wife and died here in Victoria. There was a Times Colonist article about him back in the day and me being a huge Chaplin fan I managed to get his autograph. He died at Glengarry Hospital in Fairfield. Sadly some years ago his autograph was tossed out by a family member by accident.

Visitors To the Island

Nick Nolte - He was here in the last 5 years or so for filming in Oak Bay but he was said to have been here before about the late 90's. Story was he came in off a large vessel parked in Victoria Harbour went to the hot dog cart there and wolfed down a couple of hot dogs. He was a passenger on the vessel and complained all they served was rich food like lobster and after a while he was craving a hot dog.

Bing Crosby  - It was said he came into Victoria on boat and docked at the Victoria Inner Harbour. This was in the 50's (maybe early 60's) when jeans were popular fashion. He walked into the Empress to book a room where they told him to leave (they had a no jeans policy). After realizing who it was they tossed out, the manager at the time came down to his boat to apologize profusely and gave his stay at the hotel free of charge.

Tom Jones - Tom would fly into Victoria and purchase furs for his family from the business that was located near Government and Courtney.

John Wayne - Not sure if the Duke ever was in Victoria but he must've been at least once since he was a keen outdoorsman. He was however a customer of Roger's Chocolates.

Kim Mitchell - Been in Victoria many times and actually wanted to move here but his wife said if he did it would be without her.

I’ll never look at reading a magazine at a convenience store the same way.

/\...........The Duke owned a converted WWII minesweeper which he used for years to fish off Campbell River back in the day; while out there fishing in the Tyee Pool we wondered about the boat one day back in the early 70's and headed in its general direction, not realizing as the locals did whose boat it was, and were quickly headed off by a chase boat manned by his security people. 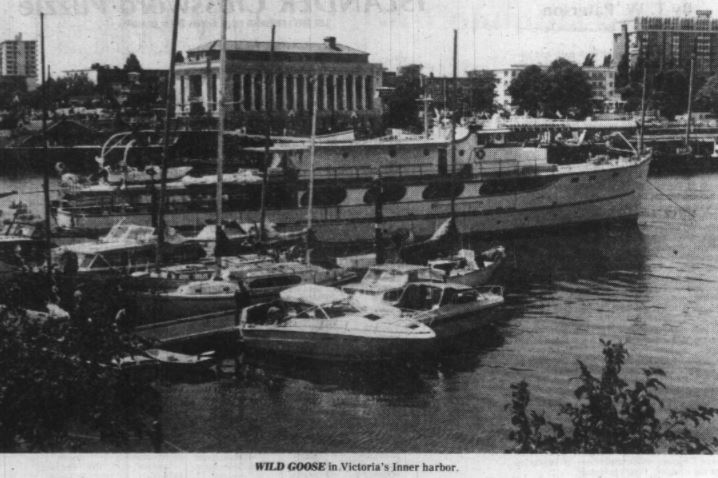 The ship was a common sight in the harbour but it didn't necessarily mean Wayne was aboard as it was frequently used for charters.

The Duke was present at a protest held in centennial square over underground nuclear test bombings on Amchika Island . Green peace was also at the protest . The duke politely told the protesters  to mind there own business and preceded to walk over the the church hill for some beers .

The ship was a common sight in the harbour but it didn't necessarily mean Wayne was aboard as it was frequently used for charters.


The sister ship to this is the Marabell, anchored in Hakai Pass for the fishing season, usually brought around to Quadra island or even the OBMG for the off season.

Bob Wright hosted many famous people at Painters Lodge over the years, including John Wayne.

When shit hit the fan for the northern resorts we lobbied hard to have the Marabell anchor at the OBMG for private events and party cruises. Never happened.

/\...........The Duke owned a converted WWII minesweeper which he used for years to fish off Campbell River back in the day; while out there fishing in the Tyee Pool we wondered about the boat one day back in the early 70's and headed in its general direction, not realizing as the locals did whose boat it was, and were quickly headed off by a chase boat manned by his security people.

He was anchored in the harbour at La Paz Mexico and we wound up having drinks on the same patio.

Life's a journey......so roll down the window and enjoy the breeze.
Back to Arts, Culture and Entertainment