CTV - local, BC and national TV

That cartoon reminds me of this photo, featured in The Boston Globe, scenes from the recession...
PS: the caption says: "Unused newspaper racks clutter a storage yard in San Francisco, California on Friday, March 13, 2009. (AP Photo/Noah Berger)" 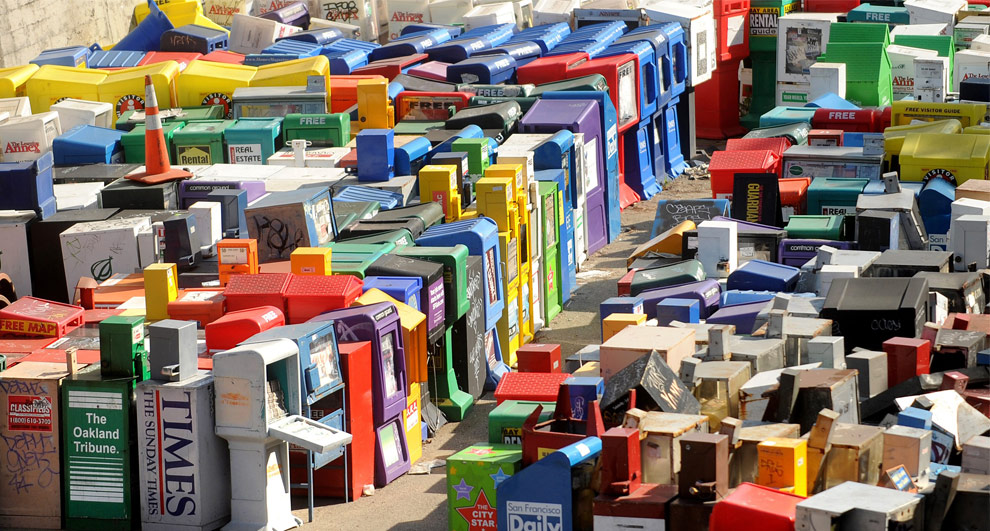 off topic - but that photo by AP news photojourno Noah Berger is really good. He also took some of the incredible pics of the Oakland tanker fire which 'melted' that major overpass...one to watch.

Oh Boy Seymour! You are in for some learn'n!!!
Your mum-in-law and I are co-workers!
Rulers of the Fempire!

Thx. And where did you get these numbers. Is there a further breakdown of time slots, days of the week etc... I have often wondered if BBM made these avail on line somewhere.

I can turn on the TV actually get some news in the 10 minutes i have before heading out to work, 'A' morning always had some interview with Sally Smith and her all girl orchestra or some other non-relevant thing.

Couldn't agree more. I much prefer the new format to the old. No more pointless rambling or "witty" banter between hosts. I don't tune in for personality, I tune in for the news.

Oh Boy Seymour! You are in for some learn'n!!!
Your mum-in-law and I are co-workers!
Rulers of the Fempire!

I'll remember to bring a helmet next time I visit her

Did Maggie Cox replace someone at A?

She is new to me, and last time I looked that station was cutting people, not hiring more.

Did Maggie Cox replace someone at A?

She is new to me, and last time I looked that station was cutting people, not hiring more.

Maggie Cox has been around since the summer. Not sure when she came onto the A-Channel staff.

On the 11 pm news last night they did a story about some vandalism at the Kinsmen park washrooms. Some kids sprayed graffiti tags all over the place including one that was a web address leading to a page that prominently displayed a photo of three naked old men engaging in a certain act that you would not normally associate with older men.

So I commend /A\ News cameras for lingering over the address long enough so that everyone could type it into their computer to see what it was all about, in the process making for a legendary schoolboy prank.

haha lemon party?! On one hand I hate pointless vandalism, but on the other hand tricking people into going to lemon party is often gold... Was popular for people to make fake anti-obama signs and go to those ridiculous "tea-party" rallies to get the tea-partiers and other crazies to go to lemon party. It's a pretty popular meme on the internet(s)

IMPORTANT NOTE: DO NOT GO TO LEMONPARTY DOT ORG!

The news-tidbits popping up on the CFAX morning show mentioned that the 'A' Channel networks would be rebranding as CTV2 soon...

The announcement was made today but the CTV Two identity won't be rolled out until fall.

Actually it was the New VI, the VI, then A Channel, then A.

The big thing will be the move to HD (with the exception of news broadcasts for the time being). I suppose HD cameras in the studio will be eventually phased in so on-air talent better start saving for botox. Advertisers need to be in HD. All programming will be in the 16:9 format although I don't know if that's already the case as I only have the old-style TV that even the homeless people don't pick up off the boulevards.

The news-tidbits popping up on the CFAX morning show mentioned that the 'A' Channel networks would be rebranding as CTV2 soon...


That name sounds a bit hokey, but I have stuck with CHEK for years so it doesn't matter what they call themselves.

As long as it isn't anything "two dot oh".

Yet another blow to Victoria's pride. We're once again second tier, and subservient to all of the decisions coming from Vancouver and points east.

Use the page links at the lower-left to go to the next page to read additional posts.
Back to Print, Televised and Radio Media