Tons of room out Akins Road way.
No transit operation ever stores their unused cars in the middle of the city they are ultimately intended to serve.
If you don't like Atkins Road, then look to Langford Lake and Goldstream.

Either way, there's lots of space in the region to situate a small train yard.

My understanding is it needs to be rail

B.C. Supreme Court Judge Robert D. Punnett dismissed the suit in June 2020, ruling it couldn’t be said that the [right of way] is no longer required for railway purposes. ICF’s plans to continue upkeep on the rail line, with present funding and its intention to continue to use the lands for railway purposes did not constitute an inefficient use that would trigger the right of reversion, he said.

The court case involved only the land bisecting the Snaw-Naw-As reservation. Yes, that would revert, but the court case did not deal with any of the other land.

Didn't the dayliner just sit on the tracks downtown over night?

No, it returned to the roundhouse for servicing and cleaning overnight.

Here she is going in.  Or coming out. 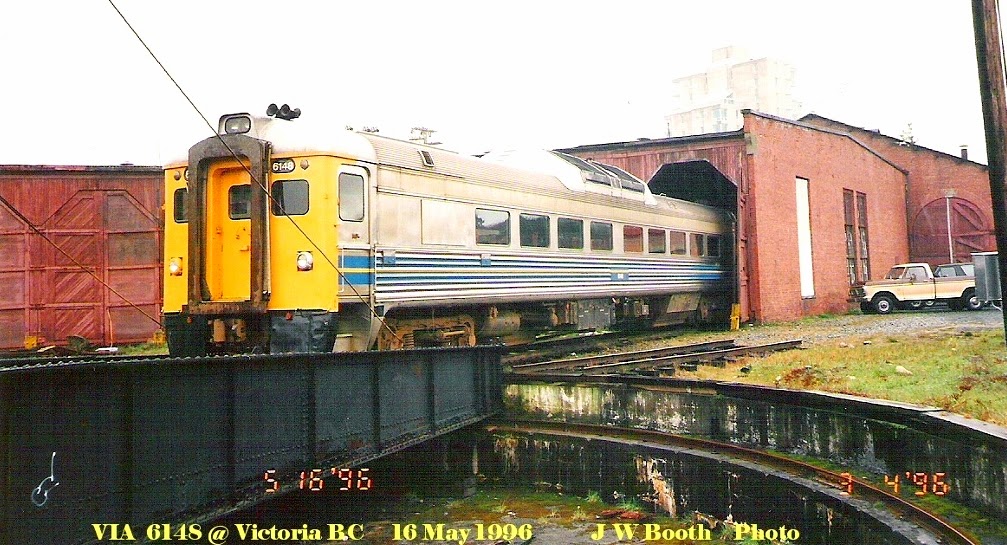 No, it returned to the roundhouse for servicing and cleaning overnight.

Here she is going in.  Or coming out.

Could've made a cool little diner...

The court case involved only the land bisecting the Snaw-Naw-As reservation. Yes, that would revert, but the court case did not deal with any of the other land.

That is also my understanding. However I dare say it would also put the rest of the land into question I'm sure. So I would predict that ALL the land would then get tied up in court for infinitum. But I am only crystal balling it here. I have no idea what has been signed as between the bands and the gov lately.

Ideally there is a solution (usually money) that enables this to be paved and run as a two lane rapid bus way that then transitions to Johnson street bridge somewhere in Vic west - without handing land back to whomever.

This is all about having another corridor into town for when we can leverage it.  Millions of dollars blasting and leveling a route into town for free.  You are about to give it away like we did the blue bridge link.

At this point it is a staring match between the provincial government and the ICF.  For the provincial government, the costs are stratospheric with poorer ridership prospects than even two years ago; the business case of the ICF is not credible.  For the ICF, there are conflicting interests, some directors whom see the rising upfront capital costs as excellent leverage for payouts.  They understand that rail is not in their interest, passenger or freight-wise, but the ICF holds the land.  If nothing happens, and rail is not instated, then the court would surely rule that the reserve land would be absorbed where it passes through the reservations - the Snaw-naw-as, Esquimalt, Cowichan, Halalt, and Stz'uminus.  That is actually not a lot of land, and long segments would remain intact, including east of the Esquimalt reservation.

The court ruling has been called by the ICF as helping to press government, but I think the provincial government, likely has this already thought out with legal advice on how things would likely pan out and how to negotiate.  They probably see inflexibility of the ICF (constitution, political make-up and alignment) as only temporary,

I wonder if we might be at peak drivers now. Things have never been so bad with HR at VRTS, or at least that’s the impression I get.

Split shifts and relatively low pay for such a high level of responsibility is going to make it tough for recruitment in such an expensive place to live.

The View Royal/Colwood strip could have a bus lane in peak hours and/or counterflow lanes.

The province is putting in a bus lane from the McKenzie interchange to the Colwood exit.

And these bus lanes ought to be HOV lanes.

They should be. But woke people like bus only lanes.

I wonder if we might be at peak drivers now. Things have never been so bad with HR at VRTS, or at least that’s the impression I get.

Split shifts and relatively low pay for such a high level of responsibility is going to make it tough for recruitment in such an expensive place to live.


The starting pay is surprisingly low!

We drove over to checkout what Langford has done with the old train station area.  It's basically runs between Veterans Memorial down to Peatt Road which is double tracked, so presumably one train can stop at the station to let another go by, but the station would be a block down where they built kind of a bus terminal for 6 / 8 buses?  I guess they could extend the spur line down past the bus terminal?

The section they have fixed up is not what I expected.  I expected the shipping containers to be food oriented, but instead are retail including local art.  There is a section for 3 or 4 food trucks and they had a band in a shelter near Veterans.  The far end has a dog park with no drama.

We'll see what happens I guess.

From a Vancouver online daily, the Daily Hive:

But ridership recovery in 2021 was not equal across all transit modes, with buses leading recovery with a rate of 62% of pre-pandemic volumes. This was followed by HandyDART at 50%, SkyTrain Expo and Millennium lines at 57%, SkyTrain Canada Line at 54%, SeaBus also at 54%, and the West Coast Express at 26%.

With factors such as work-from-home being practiced for many office-based companies in downtown Vancouver and Central Broadway, this sub-region’s ridership recovery of 54% in 2021 was the lowest of all sub-regions.

This does not bode well for the unjustified ICF rail projections, already much higher than those of the province's South Island Transportation Study. The 26% shows that many of the office-type patrons will vanish from transit for good, but also from regular downtown as a destination highway use.

Planning accordingly should be done.

Recent provincial spending announcements seem to be about throwing money at the past. Meanwhile, the Island’s rail corridor is in a use-it-or-lose-it position. There will be no second chance.

I hate to admit it, but the population is growing. Another option for moving freight and people on the Island is prudent. The future is foreseeable.

The population isn't growing though.  Except through immigration.   And there is no "freight" to move by train on the Island.

hate to admit it, but the population is growing. Except through immigration.

Are they going to walk?