Merry Christmas and the joy of the day to everyone.

Helps and council are not senior management. After a similar report, the CEO of the RBCM was forced to resign. I doubt Manak will follow suit, but I can see the board (ie Helps) cutting him loose and using the report as the basis.

According to that VicPD mental health survey, officers responses suggest that their opinion of Manak and his deputy chief are on a par with several other actors - significantly less supportive than police peers and direct supervisors but much more supportive than the Victoria Police Board (table, page 3 survey)

Union leader support not ranked highly either. How much would a normal rank and file office interact with the board? I guess just general policy, budget.

What is that graph telling us?

I don’t know. Seems they suspect 17% of their co-workers.

Not sure how this practice improves morale. 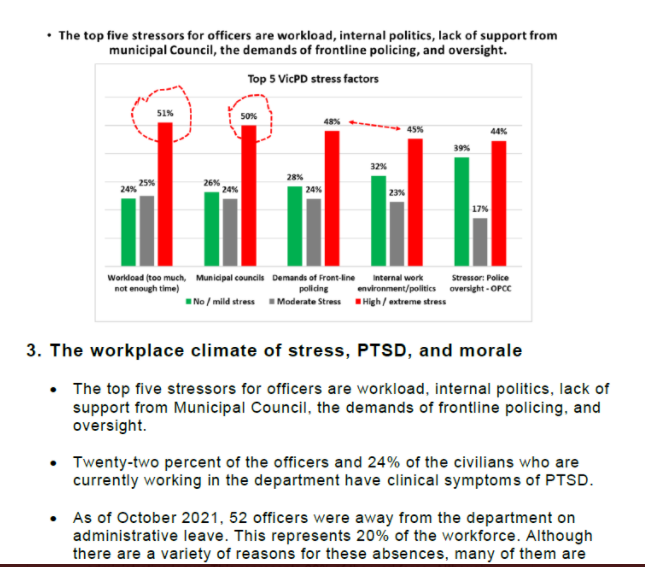 Last year was an unprecedented year of challenges for the Victoria Police Department that has taken a toll on its officers and morale, says Chief Del Manak.

But Manak is feeling optimistic about 2022, with an influx of new, experienced officers expected to start patrolling the streets in the spring.

The department has been dealing with staffing shortages and member burnout, while it has faced increased violence and vitriol on the front lines.

Factor in being a first responder during a housing crisis, opioid crisis, increased homelessness and the ongoing pandemic, and Manak said when he looks at 2021, he doesn’t think things could have gotten much worse.

“Everyone is on edge,” he said.

But with fresh police academy students preparing to join the force in late 2022 and a strong response to a Canada-wide recruiting drive looking for experienced officers, Manak is feeling hopeful.

The department offered a $20,000 hiring incentive to attract officers who could step in immediately to deal with critical shortages on the front lines.

Victoria intends to hire 12 experienced officers to work in patrol and respond to 911 calls.

Manak said the incentive appears to have worked and at this point, they have more than three times the number of applicants they were hoping for.

I'm sure they are not going into it blind.  They have Google.

It's probably true that there are many good police officers across the country that left here to go to a lower cost-of-living place to get their career start.  Edmonton or Winnipeg or Thunder Bay or Lethbridge.

And perhaps now they have a higher salary and maybe some inherited money/property to make a return here feasible.

And possibly a police department where the last two police chiefs hasn’t resigned in disgrace..

many good police officers across the country that left here to go to a lower cost-of-living place to get their career start.  Edmonton or Winnipeg or Thunder Bay or Lethbridge.

The decay in the Lethbridge Police Service

There comes a point at which the rot in an organization is so pervasive, so putrid, that the remaining bits of healthy flesh that persist therein simply cease to matter. All that anyone in its vicinity can smell is decay – sleaze, malfeasance, impropriety – and all they can see is a closing of ranks when that decay starts to seep out. Over and over again, the public is assured that the infection will be cleaned out and treated; over and over again, the body seems to manage to avoid doing the hard work of healing.

In the case of the Lethbridge Police Service, which has been suffering with an illness of reputation for some time, the promises to do better seem endless. It’s enough to make you wonder whether the necrotic disease is terminal.

'It can shut down and collapse units': Victoria's Police Union says department declared state of emergency due to Omicron
CTV Vancouver Island
The Victoria Police Department is taking a drastic step and declaring what amounts to a 'state of emergency' due to COVID-19 staffing concerns.

According to the Victoria City Police Union, current and expected staffing shortages from the Omicron variant of COVID-19 have forced the department to invoke a rarely used section of its collective agreement.

Section 11(1) gives the department the ability to quickly re-deploy any member of the force to maintain patrol staffing levels for daily 911 calls.

"It can shut down and collapse units to redirect staff to the frontlines," union president, Len Hollingsworth, told CTV News on Thursday.

"It gives (management) latitude to adjust schedules and move members around without consultation."

The department officially told the union about the changes Thursday morning. They come into effect on Monday.

Manak would not say how many staff members are currently off due to COVID-19, but says that Omicron has impacted the force.

The president of the police union says not all members agree that the police department faces an emergency, but says existing staffing shortages and looming issues did demand action.

"If there was ever an appropriate time it’s probably this time," said Hollingsworth.
More: https://vancouverisl...icron-1.5730574

Once you condition everyone to consider omicron a deadly virus you will certainly have people taking time off work, especially when they get full pay for those days off.

VicPD Notifies Officers To Prepare To Deploy To Frontlines

Victoria, BC – In response to anticipated COVID-19 Omicron variant impacts at the department, VicPD has notified all officers to prepare for potential redeployment to frontline policing.

Starting this weekend, some VicPD officers will be redeployed to the Patrol division to assist in frontline call response. This temporary measure is in place as VicPD acts in response to anticipated staffing shortages due to the COVID-19 Omicron variant over the coming weeks. This redeployment is being made to ensure that VicPD is able to continue to meet our public safety mandate. Further redeployments will be made as needed.

“Maintaining the continuity of police operations during this global pandemic is critical,” said Chief Del Manak. “I am extremely grateful to our officers who are adjusting their shifts and schedules to serve on the frontlines, ensuring that citizens of Victoria and Esquimalt know that when they call 911, a uniformed officer will respond to their call for help.”

“The VCPU and VicPD are working together as we respond to the ongoing COVID-19 public health emergency,” VCPU spokesperson Matt Waterman said. “The Union will continue to monitor and hopes the emergent situation will be resolved shortly so workers can return to their regular duties and schedule. ”

The redeployment comes as VicPD continues to face staffing challenges. Over 50 officers are already off work, primarily due to injury, as well as for training or administrative purposes.

CoV employees had until yesterday to get vaccinated.

But it doesn’t apply to police.

Victoria, BC – Investigators are seeking to identify a witness after a sudden death in Victoria in November of 2021. This is not a criminal investigation and the witness is not a suspect or a person of interest.

Shortly after 10 a.m. on Wednesday, November 17th, 2021, VicPD officers received a report from BC Emergency Health Services paramedics of a female in medical distress in the 1200-block of Wharf Street. Sadly, despite medical treatment on scene, the female died.

Investigators are seeking to identify a person who is believed to be a witness to this incident. A photograph of the witness is below.

Why are police investigating something that’s not criminal?

Maybe the statue wrecker and road blocker investigations are going so well they’ve got some spare time on their hands.

There are allegations made by the mother regarding an individual who her daughter became friends with. The claim is this individual provided drugs to youths that subsequently died from overdoses. My sense is police are trying to determine what role that man may have played in the girl’s death.

NOTE: the picture of the man on the sidewalk is NOT the man the mother is referring to. Police do not consider him a suspect, but rather a potential witness.

Some duties are being scaled back, such as fingerprinting for criminal-record checks

Police departments in Greater Victoria are keeping a close eye on staffing levels as the Omicron variant of COVID-19 sweeps through the region and among their ranks.

Last Thursday, Victoria Police Department took the unprecedented step of invoking a clause in the collective agreement with the Victoria City Police Union that would allow the chief to redeploy officers to front-line positions to bolster call response.

Saanich Police Department, which has 185 officers, says it isn’t planning to follow suit — for now.

He said to minimize staff exposure to COVID-19, the force has taken steps to reduce close interactions with the public, including suspending fingerprinting services as part of criminal record checks until Jan. 18 at the earliest.

“Fingerprinting involves close physical interaction, such as an officer pressing down on an individual’s finger to obtain a fingerprint,” said Anastasiades. “To keep our staff safe, we want to keep all close interactions to a minimum.”

The suspension does not affect fingerprinting for criminal identification.

The force’s reserve constable program has also been put on hiatus, because COVID-19 protocols dictate that officers ride in patrol cars solo. As reserve constables need to be supervised at all times, having a second person in the vehicle would deviate from the protocol.

In Oak Bay, Deputy Chief Constable Mark Fisher said the police department, which totals 21 members, has little leeway should staff be hit by an outbreak of the highly transmissible Omicron variant.

“We have some contingencies in place should the need arise, but we are a small department and the only position we can pull from would be the school liaison,” he said.

In Central Saanich, the police department is staggering shifts and support staff are working from home whenever possible. The department consists of 27 officers and three support staff, with no absences reported so far due to illness.

“Should the need arise, we have informal cross-jurisdictional mutual-aid agreements with neighbouring police departments.”

Unlike local departments, the RCMP can pull resources from around the province to address urgent needs.

”Should redeployment of RCMP resources be required, it will not affect the routine policing duties in their home communities."