Suffice it to say, when other places in the Pacific Northwest care more about your city's heritage than your city does, it suggests something is amiss.

It’s more an opportunity to get a building nobody wants locally at the costs involved to restore it locally, for dirt cheap. Don’t forget there is a hefty exchange rate working in their favour

Building here is not cheap. And costs are continuing to rise as local trades are pushed to the breaking point.

I still feel like you're campaigning to be the city's heritage preservation honcho. "Preservation would be great, but... you know."

That’s the thing, I do know.

The point I’m making is this is not a cheap pursuit, nor an easy pursuit. There are far easier ways to make money in the real-estate game.

So when a developer shows interest in preserving heritage we ought to be bending over backwards to support them, instead of finding every excuse imaginable to get in their way.

You can be head of heritage preservation and I'll be head of tourism. The first thing I'll do is move YYJ to Port Townsend.

Given their drug problems I think that’s already happened.

Avison Young is pleased to present the opportunity to acquire Porter Block, an iconic, fully leased heritage property located in the heart of Downtown Victoria. This well-maintained building is situated on the northwest corner of Douglas and Johnson Streets, offering excellent exposure and tremendous access to both transportation and amenities. Porter Block is a two-storey heritage property with basement. The basement and 1st floor are currently entirely leased by The Original Farm; the second floor has recently undergone major upgrades and renovations to convert the space into a modern 2-bedroom residential unit spanning the entire floor.

Interesting about the residential units. Right across the street Morgan Block is coming soon: https://victoria.cit...ck/?term=Morgan

Sounds like a single, large apartment, not multiple units.

I bet it's a spectacular unit. Wasn't that a bathhouse in the 80s upstairs? I mean, that's what I heard, not that there's anything wrong with that.

Before and after job in Hamilton...

I still don't understand why Victoria seems to be the only city in the country that can't do (or doesn't allow) this sort of thing. 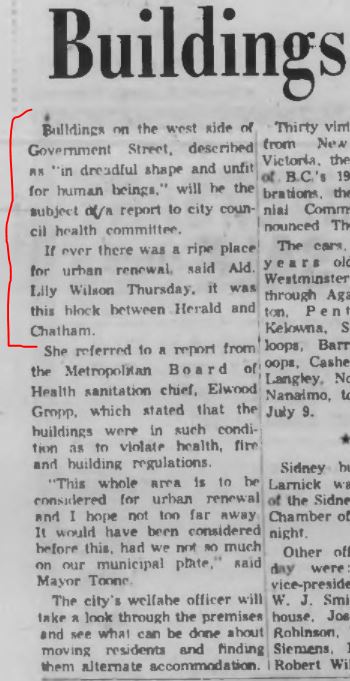 I guess the lesson here is that if you ignore a problem it can solve itself with delightful results.

I think that row gives us some idea of what the lost block of Cormorant Street would be like today if it hadn't been taken out for Centennial Square. Too bad the building on the other side of Herald isn't still there. Did it burn down or just get knocked down?

Something to chew on:

During the urban renewal era, the major problem with downtown residents was that they were too poor and too ethnic. The authorities were committed to clearing out the downtown residential population because it was the right thing to do.

During the 21st century, the major problem with downtown residents is that they're too wealthy and too gentrifying. The authorities have been committed to preventing the downtown residential population from growing because it's the right thing to do.

During the plague era... lather, rinse and repeat.

Can we see a pattern? No matter what's happening, downtown residents are always the problem, never the solution.

Before and after job in Hamilton...

I still don't understand why Victoria seems to be the only city in the country that can't do (or doesn't allow) this sort of thing.

Backward planners and decision makers who don't know any better when it comes to architectural aesthetics I suppose? It isn't just Victoria, it is the same in Vancouver as well: it is a Westcoast thing. I dare say the colonial administrators planned, designed and oversaw the construction of buildings very well back in the heydays of pioneering city centre constructions on the west side of this country, and then it went downhill afterwards. Except for a handful of projects, there aren't any exceptional projects here since then. From Victoria, Vancouver, New Westminster, Kamloops, Kelowna all the way to Alberta, the story is pretty much the same.

I've posted some examples of restoration jobs in Vancouver that would have been knocked down in Victoria without a second thought. Victoria is still knocking down things like the Fairfield church, still resisting the effort to save the Northern Junk buildings, etc.

The major problem with the "heritage preservation" movement in Victoria is that it's mainly an anti-development political ploy, and that's why it doesn't really drive anything, and that's also why it often ends up on the wrong side re: the JSB saga, the Northern Junk saga, etc.

...The major problem with the "heritage preservation" movement in Victoria is that it's mainly an anti-development political ploy...

...and that's also why it often ends up on the wrong side...

For example, if the movement deems residential units to be offensive by default, and if most restoration projects in the 21st century are by necessity going to involve a significant residential component, then where does that leave us?

...it's mainly an anti-development political ploy, and that's why it doesn't really drive anything...

It would have been a huge win all around if the residential resurgence of the past ~20 years had been exploited to facilitate restoration jobs. To hasten them.

The “rhythm” formed by the repetition of buildings is one of the core elements that knits the fabric of Over-the-Rhine together into a cohesive district. Most buildings are tall and narrow – typically 20-50 feet in width and three to four stories in height – and exhibit a variation in height from one building to the next.

Over-the-Rhine was developed as a dense walking neighborhood with the vast majority of buildings built directly up to the sidewalk. This mostly zero setback environment presents a rich pedestrian experience providing vitality, visual interest, and accessible commercial activity from the public realm. A majority of buildings are also built up to the side property lines, though some buildings have small side setbacks.

Massing, Height and Scale are fundamental to the unique identity and character of Over-the-Rhine. The District was developed on long, narrow parcels of land, resulting in the construction of tall, long, narrow buildings designed to maximize density. Thus, the quintessential Over-the-Rhine building is significantly taller and longer than it is wide,