The folks in Cincinnati got it so right. But at some point Victorians flipped the script and decided they were going to honour and preserve their city's historic district by inverting everything that the old district ever was. 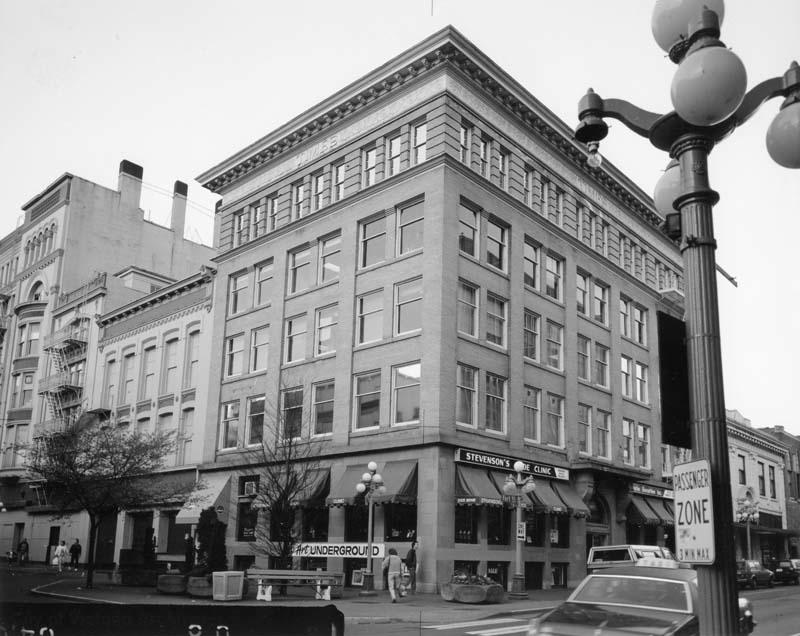 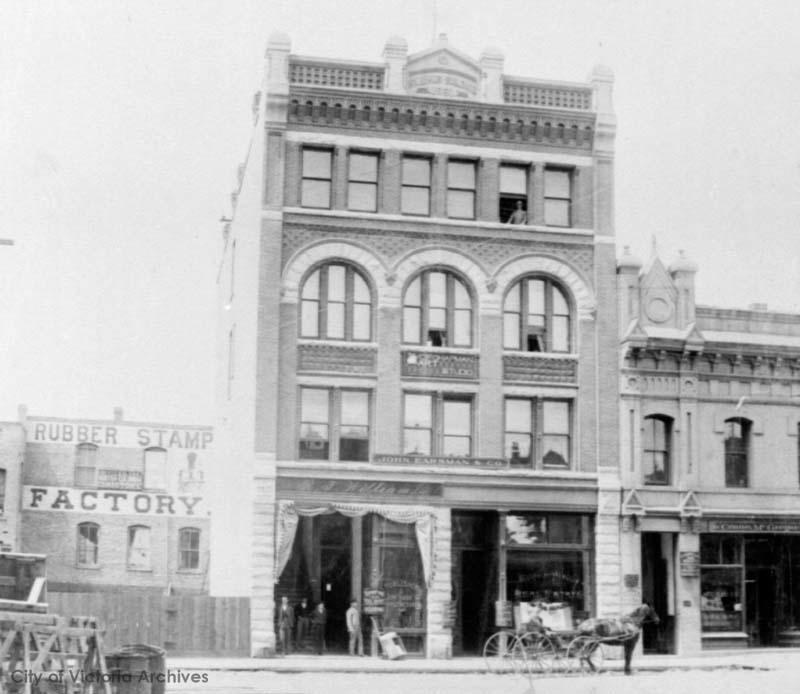 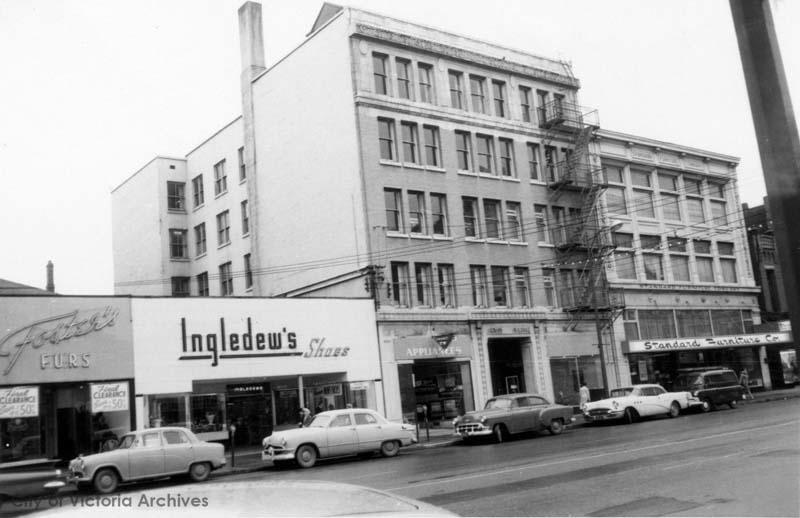 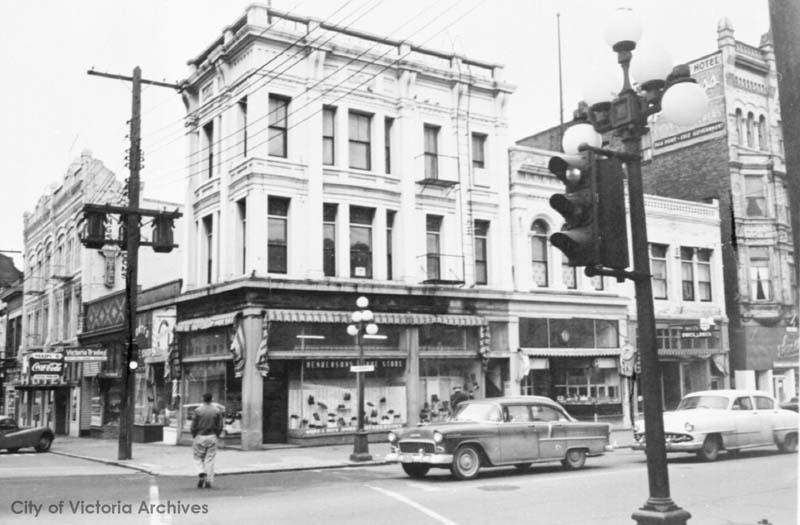 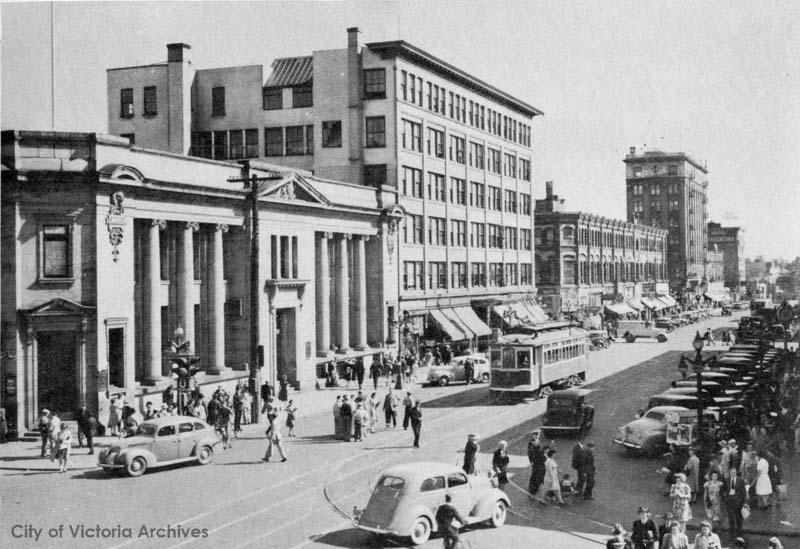 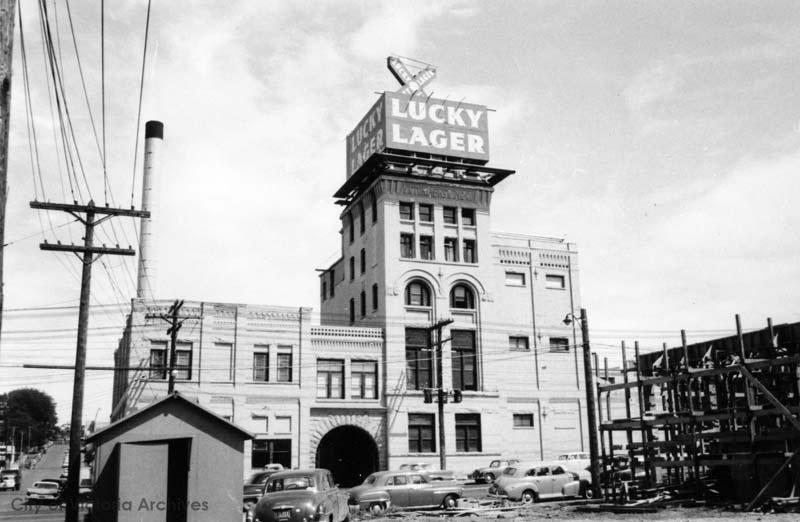 ^The brewery building encapsulated aspects of the district's overall character, but within just one building! Inconsistent rooflines, narrow/vertical dimensions...

edit: obviously long buildings existed, but when and why did people decide the long horizontal form should be king? It never was.

^Mid-20th century, Corbu and the Modernists said urban verticality was chaos, buildings of differing styles all jumbled together, constructed on narrow lots. Buildings that were now a half-century old, badly needing maintenance, vacant or filled with poor people and immigrants.

Then the Modernists came with the solution: uniformity. Buy up all the lots on the block, push the setbacks far enough away from the sidewalk to create greenspace with lots of courtyards behind. Strip the building of old-fashioned, wasteful ornamentation. Make it a perfect sculpture when viewed from the air. A factory for living.

But why did "preservationists" in Victoria buy into these ideas more than the ones in Cincinnati or other places?

Unless the bigger city is Victoria?

In this case I think it's more the smaller city choosing to not see what's really there, because crazy political baggage.

As some wise SOB on the interwebs once observed, many Victorians like to think Victoria's special character is all about what the city is not rather than what it is. As they strain to analyze things from this reversed perspective they end up trying to force stuff that doesn't really fit and they also overlook so much that should be obvious.

Premise: Victoria is not a big city.

Observation: The old districts in big cities are super granular & full of lowrise buildings that are narrow & tall.

Mike K.'s special character is that he never wears suits like his big city cousin.

Wait, Mike K. does wear suits? That's not how I like to picture him.

Solution: I'll toss his suits in the trash and I'll hassle him to wear T-shirts and track pants at every opportunity.

If I keep at it with enough persistence, eventually my notions about Mike K. will translate into reality and I'll be vindicated. He'll seem starkly different from his big city cousin, which is exactly how he should seem. I think.

Victoria exists to be something it isn’t.

Unless the bigger city is Victoria?

When a smaller place like Port Townsend gets things right, Victorians say "Of course, Victoria is too big to get things right."

When a bigger place like Cincinnati gets things right, Victorians say "Of course, Victoria is too small to get things right."

(Whenever you encounter contradictions like that you can be fully confident that politics has distorted reality beyond all recognition.)

This begs the question, what would "getting it right" mean for Victoria? How should Victoria look? Is there an ideal population?

I can’t seem to find a thread on this development yet but looks pretty sweet:

I recall reading about this proposal somewhere on VV, but I don't believe we've seen anything detailed until now. The renderings suggest a quality project, but we know that's not always how things get completed.

This begs the question, what would "getting it right" mean for Victoria? How should Victoria look?

It should look like itself. It should be like itself. It should follow its own successful examples. It shouldn't be self-conscious about not doing things that it would have done without hesitation (and done very well) back in the day, just because some silly modern commentators have decided that such things don't belong in Victoria but rather in [insert bugbear other city here].

Here are some of the comments noted the day the project was announced...

"It's an excellent project," said A.F. Walters, president of the Victoria Chamber of Commerce.

"It will hold the town together in an admirable way."

"I believe the open square and park is very important, probably as important as the buildings themselves."

"Too many of our buildings are just plunked right on the sidewalks without any OPEN SPACE." (aastra says: old Victorians just got it all wrong, from the 1860s right up until the 1960s, until the enlightened mission to fix things got underway.)

Excerpts from the narration to the film: "A Townscape Obliterated Rediscovered"

This could be any town in Canada. But it happens to be the story of one.

Any of these streets could belong to a larger city, or a smaller town. (aastra says: you know, because all cities and small towns are the same. Victoria is and was exactly the same as every other place.)

They're typical. They could belong to the place where you live. (aastra says: you know, because the extended Chinatown area in old Victoria was so generic. Every city & town has a district like that.)

There was congestion, confusion, ugliness. (aastra says: wow, downtown Victoria sounds like it was one step from hell itself. And yet generic and typical at the same time.)

People developed the trick of not really seeing their surroundings in order to block them out and forget them. (aastra says: old Victoria wasn't so much a physical place as a traumatic experience.)

That's how it was in our town. In Victoria, BC, Canada. And nobody seemed to care too much.

Until a new idea came forward, an imaginative concept for a practical, delightful oasis in the centre of town. (aastra says: oasis, shelter, escape, refuge from authentic Victoria... subversion, inversion... creation of an un-downtown.)

The plan said: renew or rehabilitate existing buildings wherever possible. If this isn't possible, tear them down. (aastra says: reluctantly & with heavy hearts, of course. But ASAP.)

Gain open space for landscaping by closing a street or two. (aastra says: the more Victoria changes, the more it stays the same...)

Suburban growth and shopping centres have sapped the strength from the heart of town. when the heart begins to decay, it's time for action. (aastra says: time to suburbanize the heart.)

Finding the right course of action is never easy. (aastra says: especially when you rule out most of the natural & logical possibilities before the process even begins.)

my full critique of the misguided attitudes exemplified in "A Townscape Rediscovered" can be found here...

This is an interesting combo,

Episode 6: What is Old Victoria and is it Worth Saving? Heritage, Housing, and the Competing Interests of Development

Matt and Jeremy welcome Luke Mari and Pam Madoff to the podcast. Luke is a partner in Aryze Developments, one of the largest and most prominent development companies in the city. Pam is the chair of Victoria's Heritage Advisory Panel and was a long-time member of Victoria's City Council. The topic of the day is 'Old Victoria' -- what is it, what's left of it, and is it worth preserving. How does Victoria preserve its heritage character while also modernizing and densifying? Plus, Luke discusses the thinking behind the floating dock that Aryze surreptitiously placed in the Gorge waterway last year.

This tourism footage of Victoria from 1936 is a must-watch (VIDEO)
https://www.victoria...st-watch-video/

One of the best things about the above video is how it will completely enrage the anti-colonial crowd.

we are the "sunshine city" but we are behind thunder bay, winnipeg, toronto, regina, saskatoon. ottawa, hamiton, edmonton, calgary etc. in sunshine.

Most visits to Victoria are in the summer. If you look only at summer, we are about as sunny as it gets. According to weatherstats.ca, we rank 9th out of Canada's 100 biggest urban areas in terms of total hours of sunshine in the "warm months" which I assume includes part of spring and fall. Our summers are, however, by far the driest in Canada: 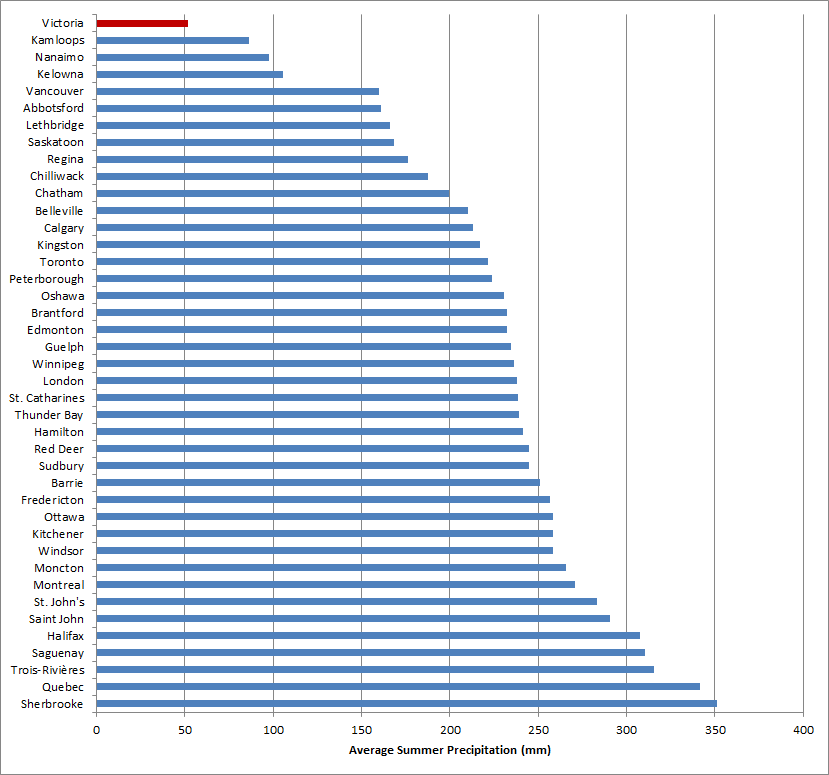 Of course winter is an entirely different story, but our winters are still sunny relative to the rest of the west coast. As someone who lived in Port Alberni for 21 years, our winters here are far sunnier and drier than what I'm used to.

we are the "sunshine city" but we are behind thunder bay, winnipeg, toronto, regina, saskatoon. ottawa, hamiton, edmonton, calgary etc. in sunshine.

And further, the Victoria Gonzales weather station registers slightly more sunshine annually (2,193) than the Victoria Airport (2,109) which is more reflective of Sidney than Victoria.