I guess we now know why she needs that $100k/year assistant.

So Helps will join Karen Elliott, mayor of Squamish and Lyn Hall, mayor of Prince George as three new mayors to join the board along with Blair Redlin of CUPE.

The mayors and Redlin join Catherine Holt, the board chair and head of the Greater Victoria Chamber of Commerce, Susan Brice, Saanich councillor, and Wendel Milne (former mayor of Sooke) on BC Transit’s board.

Helps is also a board member of the Victoria Regional Transit Commission, which is chaired by Brice.

I noticed that all of the appointment elected officials are women. I am sure that the socialists are going to have something to say about the lack of gender parity.

On the board now are five women, two men.

Ok, it seems like every time a bus pulls up to the stop outside my condo there's some sort of voice announcement.  What is that?

Yeah they now say "4. Uvic via Hillside" every time the front door opens. I never could hear it unless I was standing right at the door so I always wondered what the point was anyway aside from just altering people they got on the wrong bus next time the door opens.

Ah.  Not sure I need to hear it in my living room, but whatever.  Thanks for the info!

Yeah they now say "4. Uvic via Hillside" every time the front door opens. I never could hear it unless I was standing right at the door so I always wondered what the point was anyway aside from just altering people they got on the wrong bus next time the door opens.


it’s supposed to tell people at the curb what it is before they board.

it’s supposed to tell people at the curb what it is before they board.

As I said I can only ever hear it when I'm right next to the bus's front door anyway. I guess they turned it up or something since classes ended since I haven't been on a bus since then.

Section 169.1 doesn't mention if the bus is in service or not, so the assumption would have to be you must yield regardless.

“I’m wildly enthusiastic about transit,” said Helps, a cyclist known for the creation of Victoria’s All Ages and Abilities bike network. “If people think I’m excited about bikes, wait until they see how excited I am about buses because buses carry more people and cut more carbon, especially when they are electrified.

“In this climate emergency that we’re in, I think transit really is the future.”

Helps’ transit priorities include electrification of the transit fleet provincewide — hopefully by 2030 — all-door loading on buses, completing the bus-lane network and smart-payment systems on buses across the province.

i'm not sure about all-door loading.  it certainly seems to lead to a lot of fare evasion on other systems.

and i'm all for electric buses. when the technology makes economic sense. no need to rush it.  for example i'd rather pay for low-fare buses to the west shore rather than pay extra for electric buses.  i'd be in favour of a special $1 cash fare on the #50 bus to encourage more riders and more buses and frequency on that route.

The transit union is one of the biggest detractors of Helps’ bike lanes.


Buses have the right of way and other vehicles must yield when safe to do so for buses that are exiting a bus zone on roads with posted speeds of 60km/h and under.

The law does not apply to buses changing lanes or on roads with posted speed limits above 60km/h. The southbound stop on the TCH at Tillicum is a classic one where operators tend to forget they have no legal right to force vehicles to yield as they exit the bus zone.

As for Not In Service buses the same law applies but you shouldn't encounter to many buses pulling out of bus zones not in service.

I was on the TCH watching a bus weave through traffic with a Not in service sign .I doubt he got into town much faster than anyone else . Traffic was slow everyone allowed the bus the moves .It got me thinking thanks for the reply.

Has anyone here ridden the 14 along the current detour? I was on a 30 on the detour section and when we got to it the screen and speaker both said "this bus is now on a temporary detour. For further questions please ask the operator." until it got in range of the Carey/Grange stop. I'm curious if the 14 does that or if since it's a more heavy duty detour that even had the route map changed for unlike the 30 it just reports the stops as if it's regular route.

So we've been in Oslo now since Saturday afternoon and my God am I ashamed of our podunk transit system.  All that gas tax, property tax and fare box revenue and we get jack squat out of the system, comparatively speaking.  The busses are on time - never early - lest the driver face fines and disciplinary actions.  There is a system of trains, trams, busses and subway that all work on the same system.  The busses are remarkably modern, yet no newer than ours.  But let's start outside. Here's a typical bus stop: 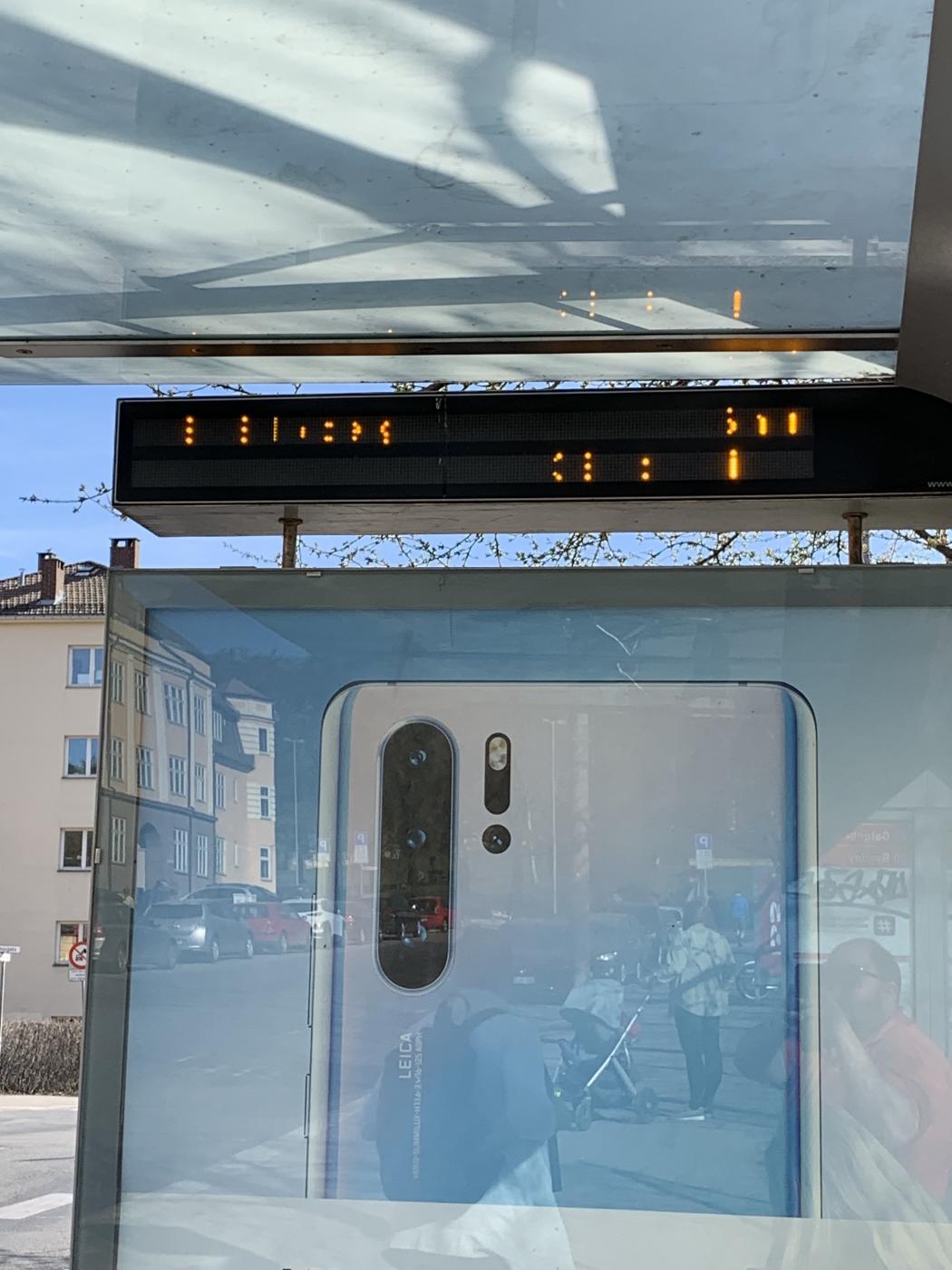 Apologies, the sign isn't messed up, it's just the whole issue of taking photos of LED signs.

Imagine, a system that tells you exactly when a bus is coming.  No having to guess if it's already come (illegal here) or still waiting for it.  I think even our perpetually delayed NextRide system is positively Byzantine compared to this.

Loading and unloading is also remarkably quick.  I don't even think that you can pay drivers the far in cash, here.  You either need to visit a convenience store - which we did, as we bought week-long passes - or you can just download the app.  And then you can get on at any entrance: front, rear or middle - oh, did I happen to mention that all busses are articulating? 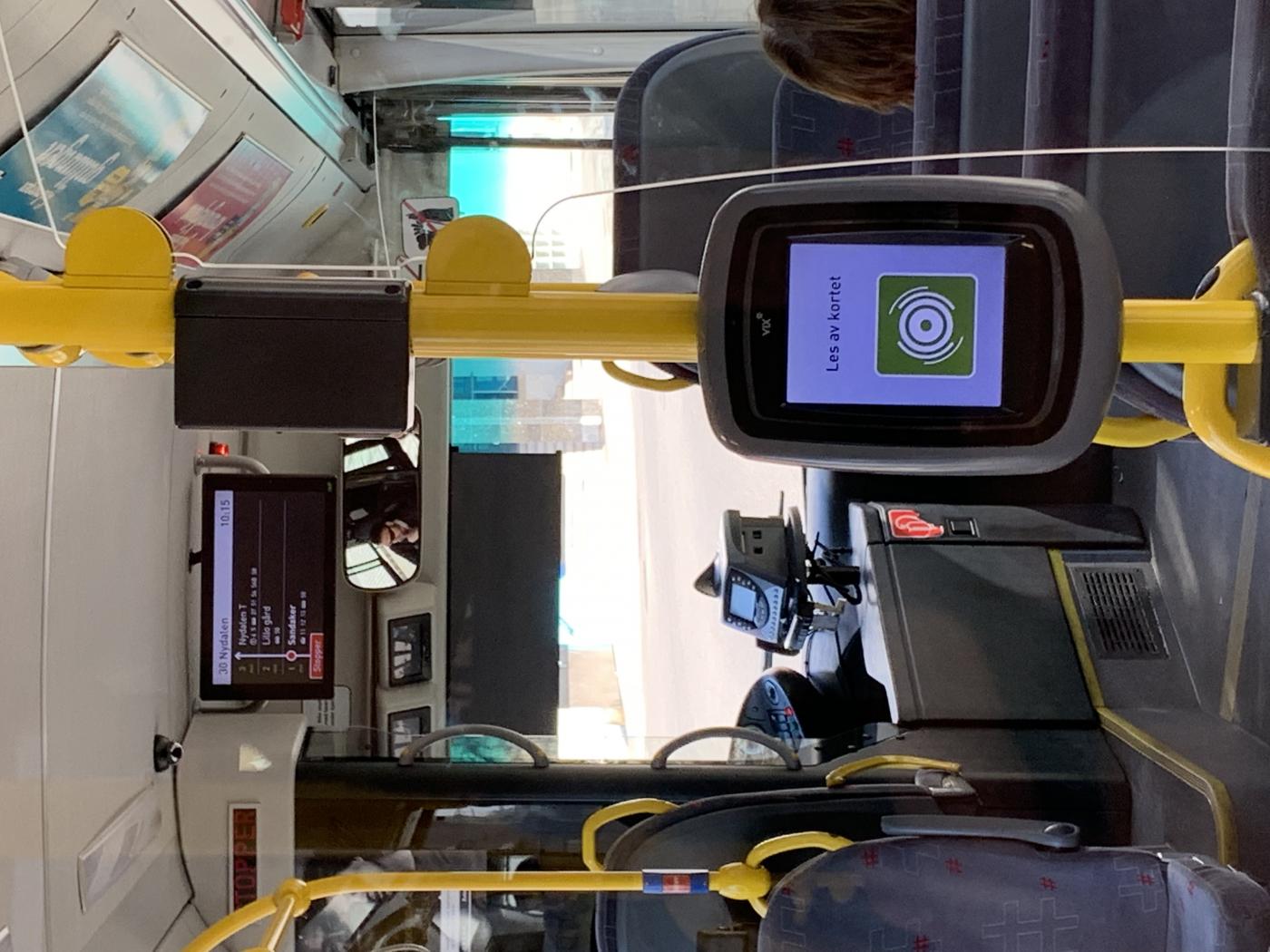 Also, you only need to scan your pass exactly one time ever during its validation period, right here: 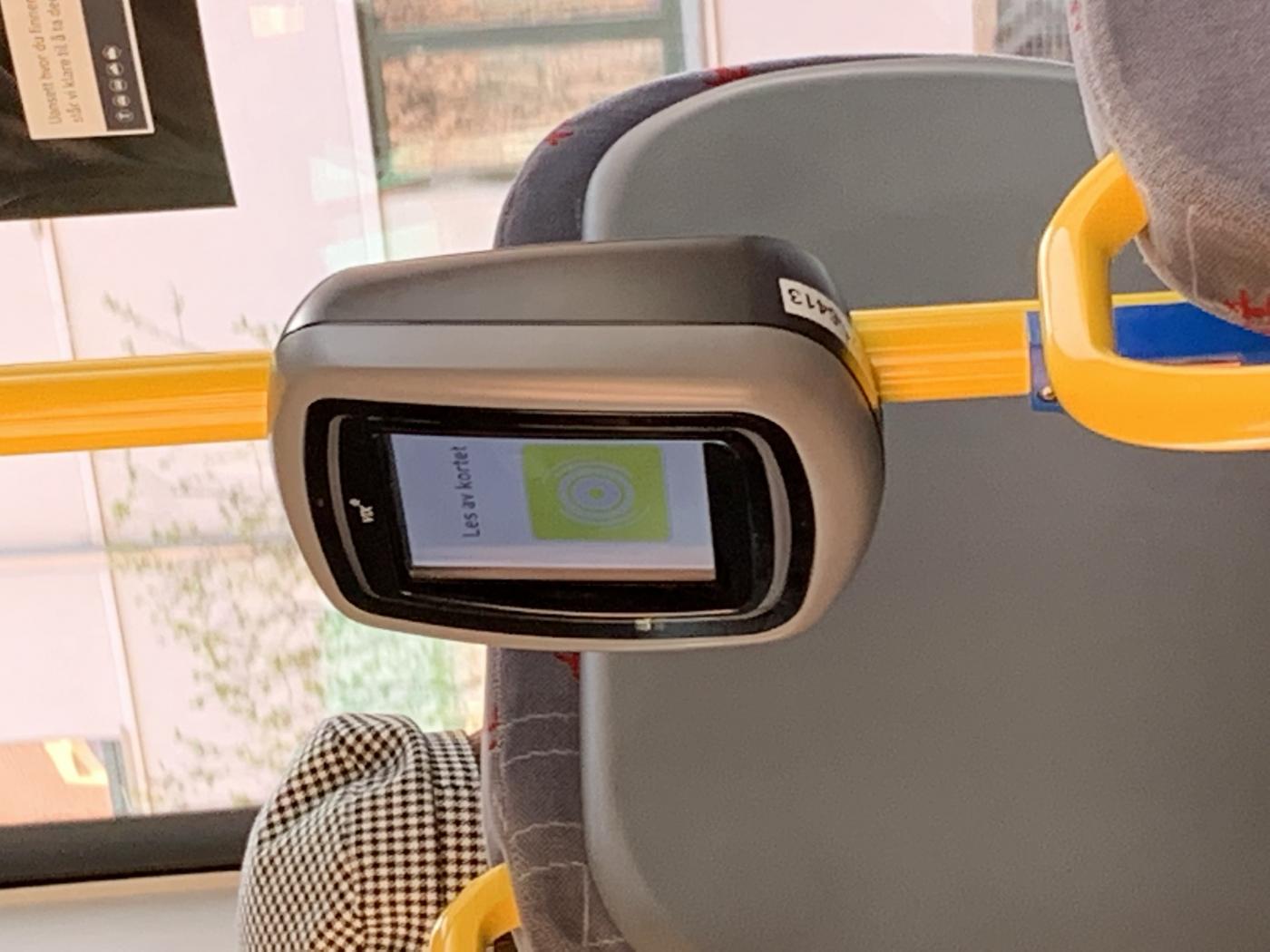 In the few days we've been riding, we've been subject to a couple of random spot checks.

Oh have I also mentioned the TV screens on each bus which tell you how far away you are from the next three stops and then all connecting busses, trams and subway stops that are there? No? Not yet?  Here you go: 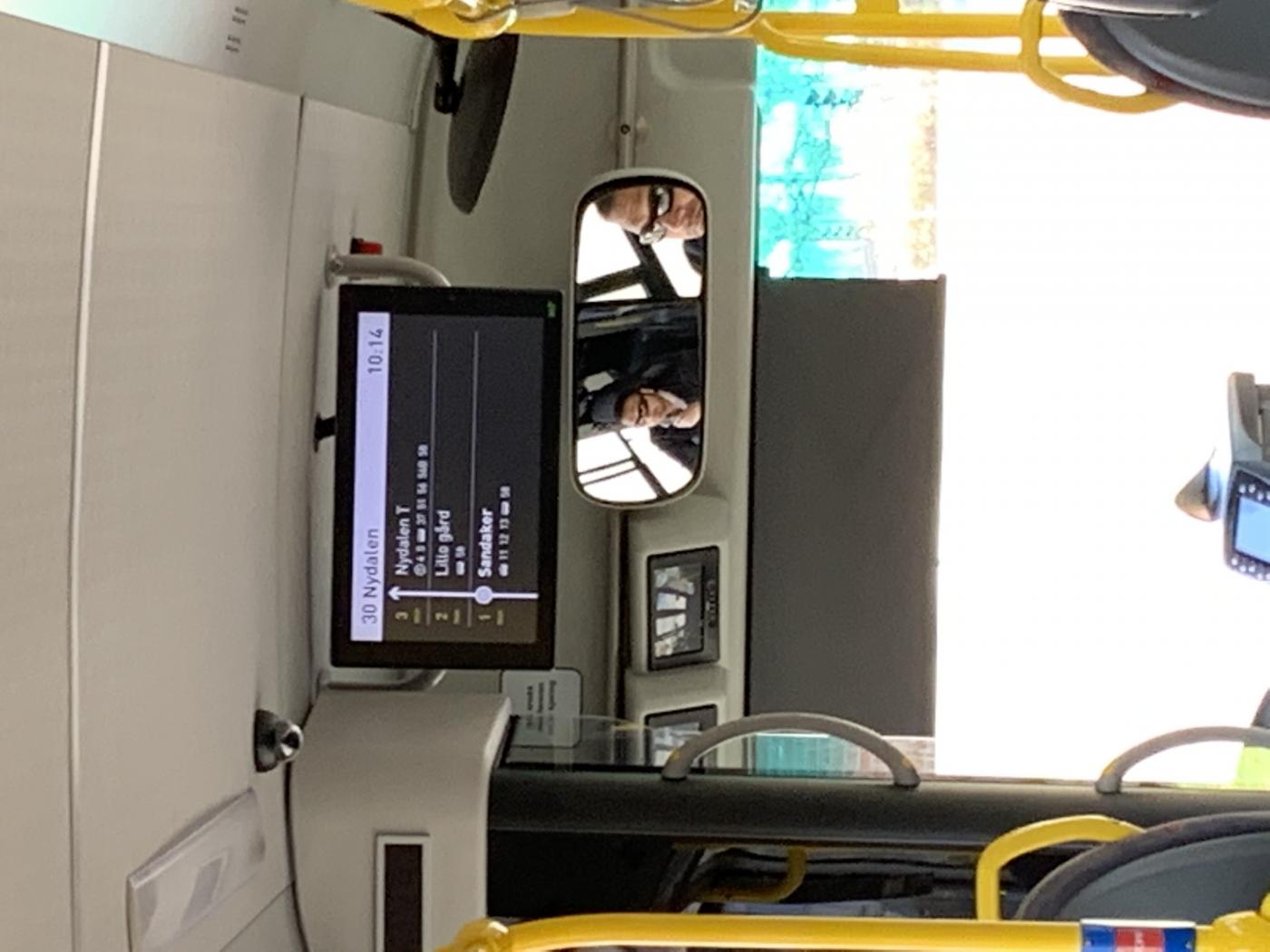 The trip planning app is also amazingly easy to use.  But, oh no!  Your phone is about to die and you won't know where you're going?  Hey, s'all good, man, Ruter got yo' ass covered - at every seat: 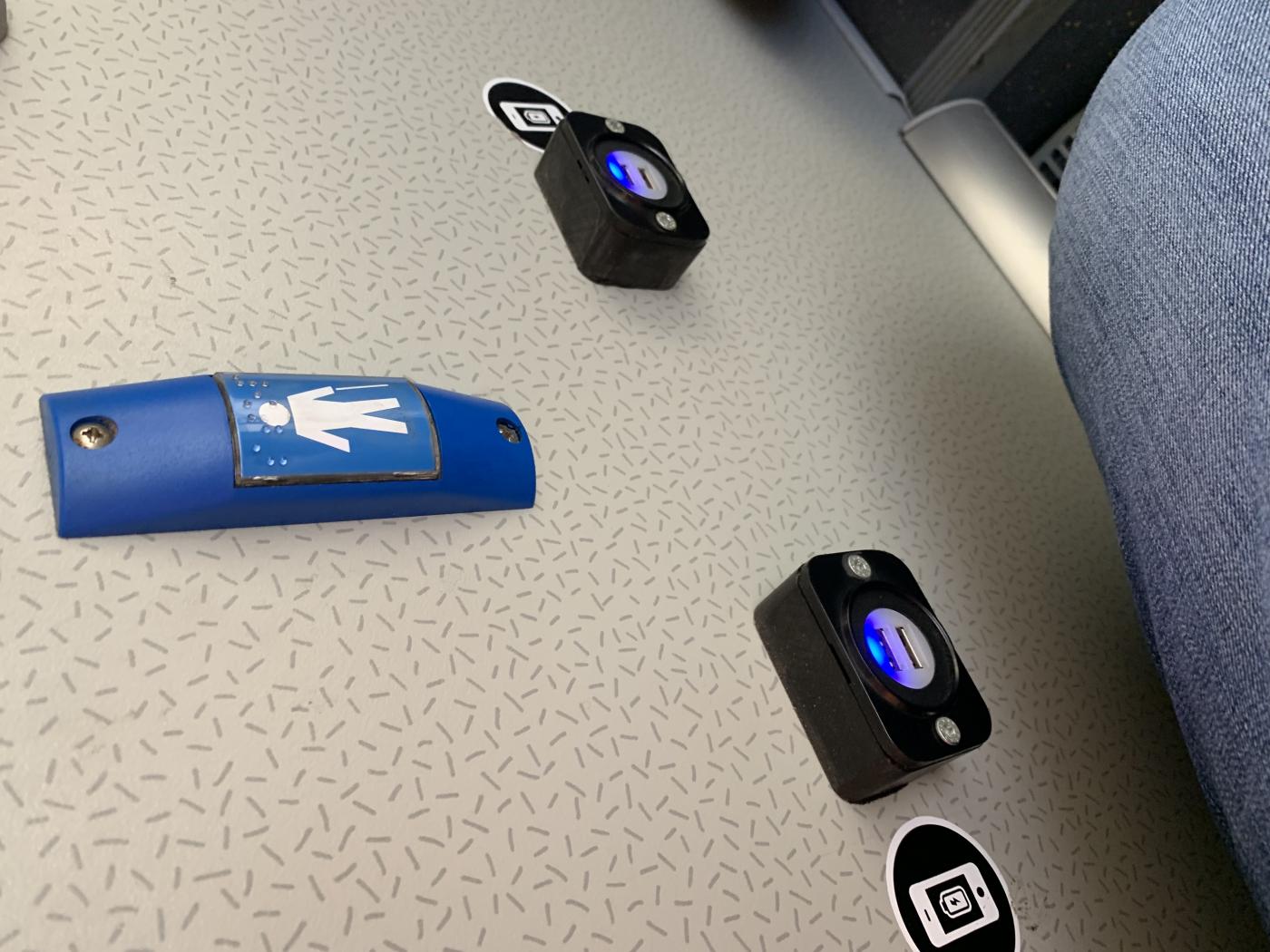 Did I mention that it covers an area as diverse as the CRD?  For example, we went to visit Mrs. Fugger's friend in a rural alpine neighbourhood about 40 minutes north of where we are.  So, no excuses for having to cover an area from Sooke to Sidney.  Because they have that and legit mountains with very legit snow.

Rather than emulating fake car bans in Oslo, perhaps new BC Transit board member Lisa Helps can look into bringing our techno and service into 2011.

Even more amazing when you consider that the buses apparently drive on their sides in Oslo!

Even more amazing when you consider that the buses apparently drive on their sides in Oslo!

You'll have to talk to Mike about that.  They were all right-side-up when I uploaded them.