That's classic DiCastri. Compare the horizontal rows of windows to the Ballantyne's/Rexall building on Douglas.

The Moore-Whittington Offices is a two-storey office block composed of horizontal and vertical rectangular components, with angled clerestory windows capped with flat, floating roof planes. It is located at the southwest corner of Turner and David Streets, within an area of industrial buildings in the Burnside neighbourhood of Victoria.

The Moore-Whittington Offices is significant as one of the key commissions undertaken by architect John Di Castri (1924-2005), who played a seminal role in establishing modern architecture in Victoria during the early postwar years. It illustrates Di Castri's interest in the development of a personal brand of modernism. His work remains distinctive for its regionalist architectural expression - a rich fusion of materials and complex, eccentric forms that demonstrates Di Castri's interpretation of Wrightian motifs including horizontal planes, manipulated volumes and irregular geometry. Throughout his career, DiCastri retained a singular vision of modernism, one that did not shy away from historical references or decorative elaboration, paralleling the later work of Frank Lloyd Wright. The long, linear composition of this building recalls Wright's early Prairie School houses, with interlocking horizontal lines anchored by vertical projections. The continuous clerestory windows bow out, seemingly under pressure from the oaring roof planes, setting up a dynamic tension that animates this soaring design. The angled fascias were one of Di Castri's distinctive design features.This site is also significant for its associations with Moore-Whittington, established as carpenters and builders in 1893, and prominent for many years in the Victoria region. The company experienced significant growth after the Second World War and was renamed as the Moore-Whittington Lumber Co.Ltd., a large lumber operation that was absorbed by BC Forest Products in the 1960s.The Moore and Whittington Offices reflects the community character of the Burnside neighbourhood,which has a blend of industrial, residential and commercial uses that has always been distinct from Victoria's other neighbourhoods. Although heavy industry had largely disappeared by the 1980s, the Rock Bay area of Burnside, where these offices are situated, remains a light industrial district today.

Key elements that define the heritage character of the Moore-Whittington Offices include its:

- location at the southwest corner of Turner and David Streets within an industrial area in the Burnside neighbourhood.

It is an amazing building for sure. However it also appears to be at least partially abandoned. I am worried that it is going to either collapse or something if someone doesn't help it out.

Could be a cool brewery...

That's classic DiCastri. Compare the horizontal rows of windows to the Ballantyne's/Rexall building on Douglas.

Thanks so much for that detail.I found that building last year after the event about the murals in Rock Bay.

Unfortunately I don't think the current users of the building appreciate its significance. And I didn't until today.

Even 20 years ago that was still a great building in good shape.

The closure of David and Pleasant Streets to traffic, and the change of that entire few blocks into a junk yard didn't do very much in terms of encouraging the maintenance of the buildings surrounding the scrap yard.

Indeed, the front of that building is actually on the now "closed" portion of David Street.

As a side note, how on earth did the scrap yard get their hands on two public thoroughfares (David and Pleasant) such that they could gate them and close them?

Pre 1990, those were paved, reasonably good looking streets, and you could drive all the way down David to Pleasant, around the bend, and then up on by Point Ellice House.

How do city streets get taken over and turned into dirt roads inside the scrap yard?

Regardless, the slow optical demise of that corner of town certainly doesn't encourage building owners like those of this DiCastri to spend money on maintaining the looks of their buildings. I wouldn't be at all surprised to see that building torn down in order to stack up yet more scrap cars, drywall, construction waste, etc.

...As a side note, how on earth did the scrap yard get their hands on two public thoroughfares (David and Pleasant) such that they could gate them and close them?

Pre 1990, those were paved, reasonably good looking streets, and you could drive all the way down David to Pleasant, around the bend, and then up on by Point Ellice House.

How do city streets get taken over and turned into dirt roads inside the scrap yard? ...

At some point those road sections were parcelled off and sold. Compare the 1990 zoning map with the current 2019 GIS map. Note that part of Turner has also been added to a land parcel. Any land sale would have been approved by Council. 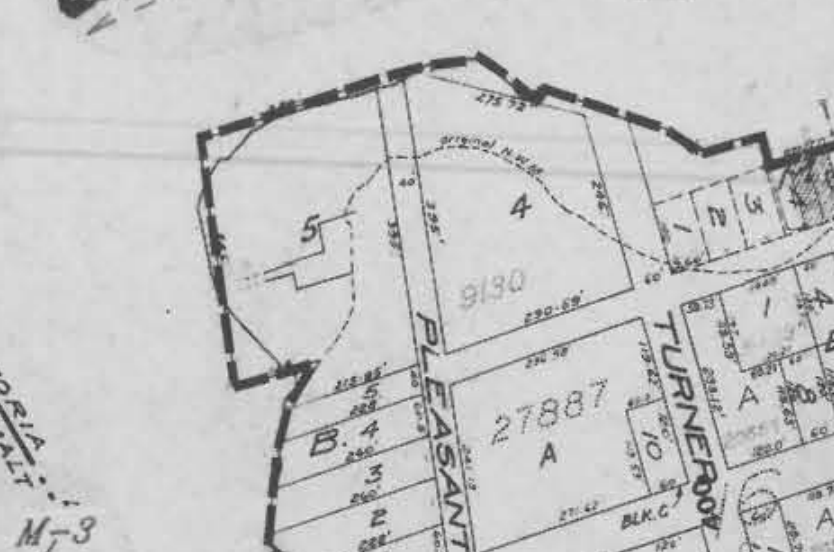 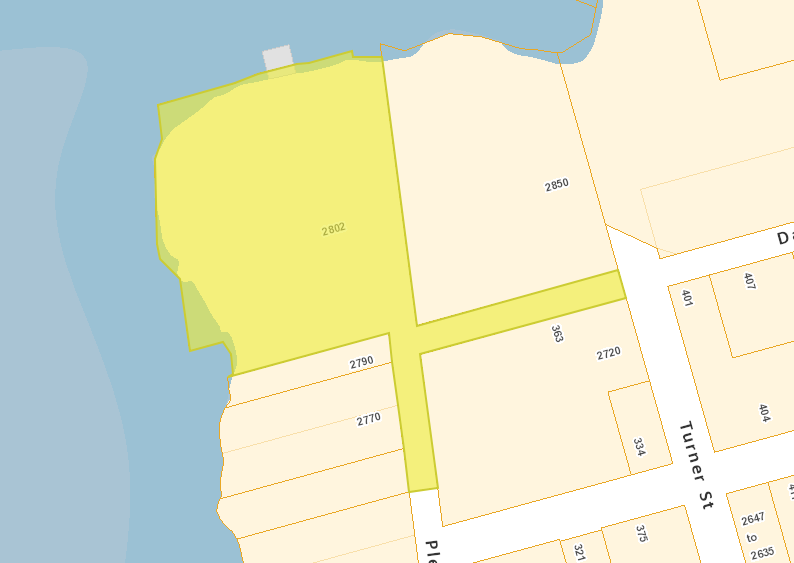 That's some fancy detective work!, thanks ... and it explains something I've wondered about for years ... which was how does a city literally lose two edge of downtown streets.?

I don't know enough about the legal machinations behind such transactions, but one has to wonder where the COV gets the presumed authority to sell of publicly owned streets to a privately owned junkyard?

...one has to wonder where the COV gets the presumed authority to sell of publicly owned streets...

Let's not get too caught up in this, or we'll never see the Northern Junk property redeveloped.

Aside from burdening taxpayers with the costs of restoration (if for example, the CoV were to buy this property) what is the best solution here?

...The 1UP Victoria Single Parent Resource Centre owns the red-brick building at 602 Gorge Rd. East, but the heritage designation of the 1885 structure means options are limited...Selling the building has been a challenge because as a heritage property, it cannot be torn down for redevelopment...in recent years, the 134-year-old building was showing signs of structural impairment. Deep cracks were appearing in interior walls and the exterior...A report, received by the board on Jan. 22, found that because the ground under the building is shifting, the property will eventually collapse...The building was previously on the market for 18 months, listed at about $700,000, with zero takers...

Is there even enough surrounding property to make any sort of privately funded redevelopment viable? 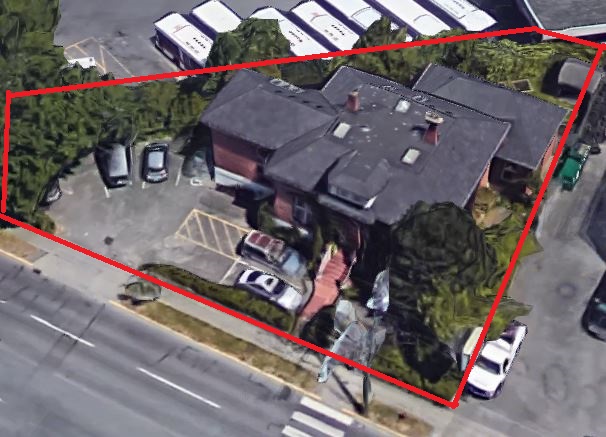 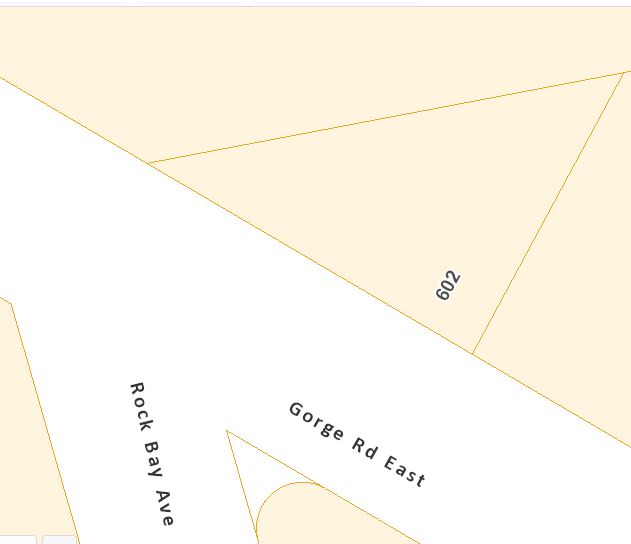 The dilemma seems to be this: despite the best efforts of Victorians to crap on that neighbourhood over the course of several decades, there are actually still some things worth preserving from the formerly impressive collection.

If Victorians unanimously agree that they don't want the neighbourhood to be worth a damn going forward and that they never ever want the neighbourhood to experience a revival of any kind, then how about upzoning some of these now isolated properties on the condition that the heritage buildings/houses get relocated somewhere else in town? I've asked this many times but how come after all these years Victoria still doesn't have any innovative programs in this regard? Crikey, a heritage asset is falling apart, and the rules effectively make its total loss inevitable.

There are other heritage houses in the vicinity that have miraculously avoided destruction but that you just know will come under fire eventually. Why not gather them up and relocate them somewhere together (in Victoria) as the the foundation of some new development?

But aastra, that would be expensive!

Okay, so make it possible by upzoning the eligible properties.

But aastra, that would be effective!

but nor do i think it's destined to crumble.  it can have its foundation fixed.

it can be made into something with some relaxing of rules.  it just has to be in the right hands. sorry it did not sell for $700k.  maybe it just isn't worth that much.  that's usually an indication of why things don't sell.

This say you can

that looks like brick bottom only and 1/4 to 1/2 the size. also has to be considered where are to taking it to locally here? it can’t go far without moving lots of sets of overhead wires.

The 1UP Victoria Single Parent Resource Centre is not that big of a building.

You should really try to find some episodes of Mega Moves on History Channel before saying "i don't think you can "pick up" a huge 1885 brick building".

if money is no object it can of course be moved.  they moved london bridge from london england to to lake havasu usa.

i guess i should have said "easily move".

Old buildings are relocated all the time. We need to take off our Victorian glasses and consider the solutions that have been successfully put into effect in cities far and wide (cities that aren't insincere frauds re: heritage preservation, I mean).

Anyway, maybe you don't actually need to move it. Maybe you could incentivize its restoration one way or another via amalgamation of adjacent properties, etc.

Victoria may be a fraud re: heritage preservation, but at least it's a sincere fraud.

...maybe you don't actually need to move it. Maybe you could incentivize its restoration one way or another via amalgamation of adjacent properties, etc.

I suppose there's always a chance Tires Unlimited will decide it's worth spending a couple of million dollars to turn it into a display place for their products.

If it can work for Ming's, maybe tire showrooms are the future of once interesting places that become derelict.

Come on NParker, even Manhattan (NYC) has automotive shops. It may not be the dream development, but at least its not going to sit empty for decades. With this move it is pretty obvious Big O had no plans to move anytime soon.

more on that house: