...This is not in the Gorge Waterway as it is being reported. It is in the Upper Harbour....The Gorge waterway doesn't officially start until one passes the Selkirk Trestle

Oh please. 99% of locals consider this area the Gorge. If I had been told this incident had happened in the "Upper Harbour" I would have assumed it was south of the Bay Street Bridge (or is it the Point Ellice Bridge?) but north of the JSB (which will really be mis-named when the new bridge connects almost directly with Pandora, not Johnson).

Someone needs to update Wikipedia as well:

Wikipedia is not Gospel it is written by the average Bloke who wants to write his interpreation of the subject.

Please dont believe everything you read on wikipedia

When in doubt, look at the references that Wikipedia articles are based on, such as this one:

Here is the official description

The Barge is in the Upper Harbour

Wikipedia is not Gospel it is written by the average Bloke who wants to write his interpretation of the subject. Please don't believe everything you read on Wikipedia

I certainly don't. What I am suggesting is that in POPULAR vernacular the area north of the Bay Street Bridge is not considered the upper harbour. In order to make the story as meaningful as possible to as many people as possible the popular term was used. Call it journalistic poetic license if you will.

ps: The Gospels are not gospel either; they're open to plenty of interpretation

REALLY?!? Our harbour is facing an environmental event and we are fighting about Gorge or Upper Harbour? It really doesn't matter!

I am not sure that it is such an environmental event Sid that is causoing any distress to the water.

Seem like just a recovery event of a few car bodies.

^You'd argue a blind man that the sky's not blue wouldn't you? Just for the sake of having an argument.

Okay, I remove the environmental event part and call you on the no one really cares if it Upper Harbour, Gorge, or for that matter Taiwan.

Just had a customer tell me that they have a very large crane on site, lifting cars off the tilted barge. Anyone able to get photos of that? I'm stuck at work but only blocks away. Curious to know what kind of crane and whether they had to bring it in?

Here is the official description

The Barge is in the Upper Harbour

HB, while you are correct that the Seaspan barge is not in the Gorge Waters, it is also not in the Upper Harbour, it is in Selkirk Water.  The Vancouver news media may have decided to use a more broad, although technically incorrect, description of the area the barge was in.  If they had said Selkirk Water, I think most people would not have had a clue as to where that is.  It also doesn't help that everyone's goto map, Google Maps, only lists TWO of the harbour's five sections regardless of zoom - Upper Harbour and Gorge Waters.

If we assume the government's GeoBC website is the definitive word on the subject, here are the five sections of Victoria Harbour with a map I made outlining the sections with dual color labels for clarity.  BTW, they use Chapman Point as the start of the Gorge, not the Trestle Bridge as the CRD does.  Do locals even know where Chapman Point is?  Again, Google Maps is no help so certainly the Trestle Bridge is an easier landmark.   As a relative newcomer to Victoria I've always been confused about the various harbour sections and where they begin/end and so this discussion has been educational. 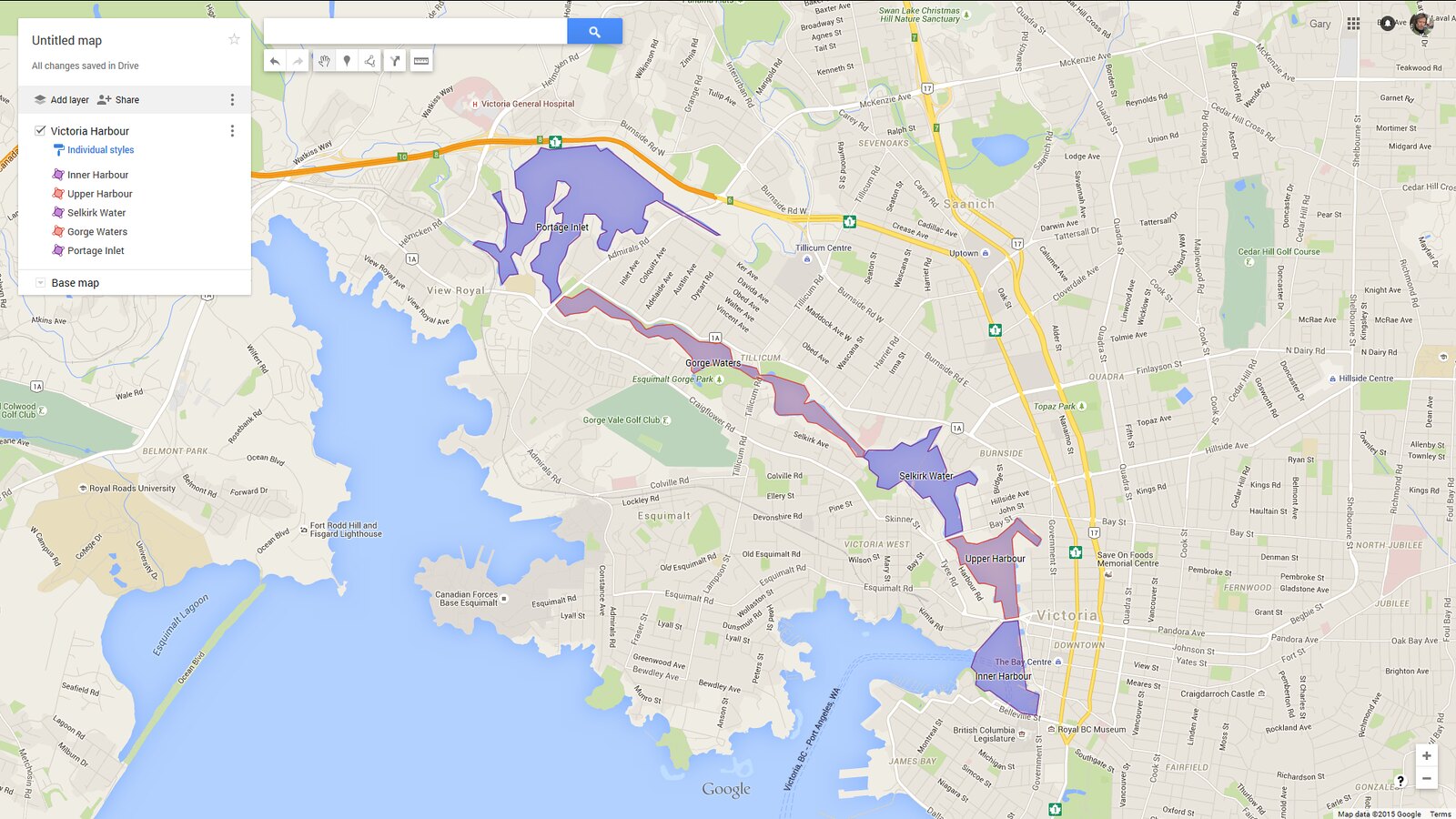 Just had a customer tell me that they have a very large crane on site, lifting cars off the tilted barge. Anyone able to get photos of that? I'm stuck at work but only blocks away. Curious to know what kind of crane and whether they had to bring it in?

See post #19 above.  The Salish Sea is the RALMAX barge crane that is now onsite to save the day.

Thanks for the map Gary.This helps make sense of things for me,

The barge is not listing anymore

the one in the Gorge?

For the purpose of this traffic scheme, the Port of Victoria may be considered in four parts:

Born and breeded here.  I've never heard those terms used.  I don't care what transport Canada calls it.  The inner harbour stops at the JSB and after that it's the Gorge waterway.

Also nobody was less surprised than me that this happened.  Biking past here every day I get to see how ridiculous the loading process for that barge is.  Usually one end of the barge is about 2 inches off the water.

^ Actually the stretch of waterway you are referring to is named Victoria Arm.