Interesting. A very progressive step by the organization.

There is nothing progressive about taking women back 500 years.

For Islamic women who choose to wear the hijab it allows them to retain their modesty, morals and freedom of choice. They choose to cover because they believe it is liberating and allows them to avoid harassment.

well not so sure about that but the entry is obviously edited by "progressives".  anyway if the design is to encourage modesty why would you have a sports team logo on it drawing attention?

here's a more critical look that appeared in the new york times:

Today, well-intentioned women are wearing headscarves in interfaith “solidarity.” But, to us, they stand on the wrong side of a lethal war of ideas that sexually objectifies women as vessels for honor and temptation, absolving men of personal responsibility.

This purity culture covers, segregates, subordinates, silences, jails and kills women and girls around the world. Recently, in Bareilly, India, a father killed his daughter, 4, smashing her head against the floor when her scarf slipped from her head during dinner. In Ontario, a few years ago, a man strangled his 16-year-old sister when she defied their father, including by refusing to cover her hair. In November, a former University of Missouri instructor dragged a female relative, 14, out of school “by the hair” when he discovered she hadn’t covered her hair. Today, in Iran, friends of the journalist Masih Alinejad dodge batons as they shoot photos of themselves, hair bare, in a campaign Alinejad started, #MyStealthyFreedom, to protest Iran’s mandatory headscarf law.

The NBA’s decades of work building its business in China are suddenly at risk.

The US basketball league originally seemed willing to placate China after Houston Rockets general manager Daryl Morey, in a now-deleted tweet, voiced his support for the Hong Kong protesters. But NBA commissioner Adam Silver today issued a statement taking a firmer stance in support of free expression that has already prompted a backlash from the NBA’s partners in China.

“Values of equality, respect and freedom of expression have long defined the NBA—and will continue to do so,” Silver said. “As an American-based basketball league operating globally, among our greatest contributions are these values of the game.” He added that people around the world will inevitably have different viewpoints. It’s not the NBA’s role to adjudicate those differences or regulate what people in the league choose to say, he said.

The response from China came quickly. Chinese state television, CCTV, suspended its plans to broadcast the NBA pre-season in China and condemned Silver’s remarks. Smartphone maker Vivo, which was set to sponsor upcoming exhibition games, has halted cooperation with the NBA, as has Tencent, the Chinese internet giant that serves as the NBA’s digital media partner in China.

I, for one, welcome our new Chinese basketball overlords.

YOUR STATEMENT HAS AUTOMATICALLY BEEN DETECTED AND FORWARDED TO THE PEOPLES' PATRIOTIC SURVEILLANCE BUREAU IN BEIJING. THANK YOU FOR USING HUAWEI

“Values of equality, respect and freedom of expression have long defined the NBA—and will continue to do so,” Silver said

Didn't somebody predict this would happen?

"You will hear of wars and rumors of wars, and the NB-freaking-A will actually have the gall to lecture others re: ethics and values."

All of the NBA's official Chinese partners have suspended ties with the league as it grapples with the fallout from a team manager's controversial tweet about Hong Kong.

NBA China lists 11 wholly-owned Chinese companies as its official partners in the country on its website, all of which now say they have halted business with the league, according to a review by CNN Business of company statements and social media posts.

There's a lot at stake for the NBA. The Chinese market makes up at least 10% of the league's current revenue, and could reach 20% by 2030.

So far, most of the league's international partners in China have stayed silent. Nike (NKE), Adidas (ADDDF) and Under Armour (UA) have not issued statements on the matter, and did not immediately respond to requests for comment.
But signs of strain are starting to show up. On Wednesday, Clear, a haircare brand owned by consumer goods giant Unilever (UL), said it would suspend all ties with the NBA in China.

from the babylon bee today: 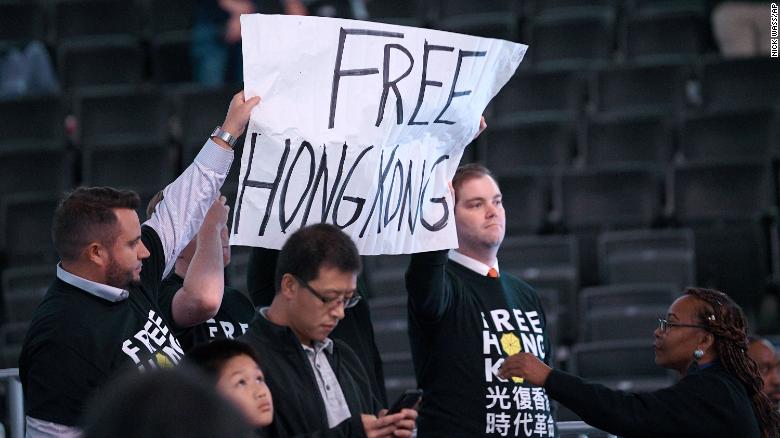 Pro-Hong Kong signs were confiscated at the Washington Wizards game

seems to me this is barbra streisand effect now.

Can someone explain to me why the NBA is so scared/taken aback by comments relating to the Hong Kong protests?

Is China going to ban/outlaw/remove anything and anyone who speaks out about the protests in a way the state doesn't like? Like what's the goal here, to pretend they're not happening?

this video is funny when they go back to the players:

List of companies under China's censorship orders (so far). Credit to u/lebe

Apologies for formatting since im on cellphone. If you know better subs to post this on go ahead Business Hall of Bootlickers:

After decades of opening up wide the Western market to China while turning a blind eye to rampant Chinese IP thefts, forced tech transfers, and protectionism, we are looking at widespread control of Western businesses by China. Businesses that are not under outright Chinese control are still kowtowing to China out of sheer fear of China's retaliation.

This is just a very incomplete list of what we're seeing publicly. Imagine how bad it really is behind closed doors.

Can someone explain to me why the NBA is so scared/taken aback by comments relating to the Hong Kong protests?

Is China going to ban/outlaw/remove anything and anyone who speaks out about the protests in a way the state doesn't like? Like what's the goal here, to pretend they're not happening?

Basketball is one of the most popular sports in China, and it is a huge target market for future NBA growth.

I think the goal is a power play. China is demonstrating to the world how important they are by having huge American companies bend over backwards to suck up to them. 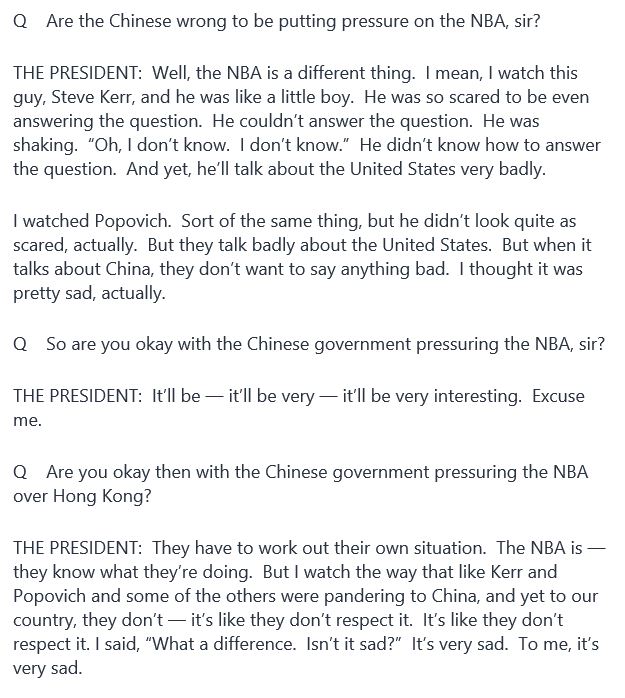 look YOU have bought hundreds of chinese products.  if you are so outraged now about trump just avoiding a direct response how do you explain your made-in-china purchases over the years?  the items are almost always clearly marked.

the whole thing is quite a farce.