you're upset about trump.  but the nba-china thing really has little to do with him.

the outrage one side is concerned about is that china is bad and has 1 million uighurs in concentration camps.  that same side dislikes trump causing trade problems with china. 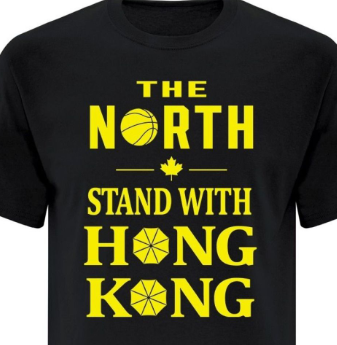 The Raptors have not endorsed the t-shirt giveaway, and, given the fiasco in which the NBA has embroiled itself, I am sure they won’t. But it is nice to see fans stepping up.

In principle, it is not good that most Americans pay more attention to sports than to current events, so that the plight of Hong Kong is debated mostly as the result of a basketball general manager’s tweet. But at least both sides are being heard, which is different from what you usually see in today’s “news” media.

Lared took to the Lakers’ Reddit page to announce his plan to make the shirts and hand them out for free during the game on October 22. To fund the venture, Lared launched a Gofundme with a goal of $20,000; the project raised nearly $43k before donations were disabled.

On Tuesday, LeBron James became embroiled in the China-NBA-Hong Kong flap, when he called out Morey for his tweet saying, “So just be careful what we tweet and say and we do, even though, yes, we do have freedom of speech, but there can be a lot of negative that comes with that, too.”

This led to many Hong Kong protesters to retaliate by gathering on courts to trample on LeBron jerseys and even burn one.

Lared has continued to give fans and supporters updates on Twitter regarding the T-shirts; most recently Lared was looking for volunteers to help hand out the shirts.

(the season opens next week)

(the season opens next week)

The NBA has a massive fan base in China and CCTV has traditionally shown the season openers.

But the games featuring the Toronto Raptors against the New Orleans Pelicans and the Los Angeles Clippers against city rivals the Lakers were not shown on the Chinese network on Wednesday morning (Tuesday night in North America).

he was famous for actually taking a helicopter from his home to games and practices in los angeles.

Kobe Bryant was once the highest-paid and most electric player in the NBA.

While Kobe has an insane work ethic and has historically been completely consumed by basketball, he has found time to enjoy life and pursue ventures off of the court in his retirement.

In addition to collecting beautiful houses, fancy cars, and even a helicopter, the Black Mamba has mentored up-and-coming NBA stars, invested in projects in tech, athletics, and entertainment, and even won an Oscar.

In a 2009 column by ESPN’s Rick Reilly, Bryant admitted that he liked to charter a chopper to travel the 49 miles from his home to the Staples Center, where the Lakers play.

“Sometimes, there’s just things you cannot miss,” he told Reilly. “Like my daughter’s soccer game. Because what if I miss her first goal?”

Bryant did admit, however, that he never choppered into one of the girl’s games.

The 41-year-old hoops great died in a chopper crash in California Sunday. It is unknown if he was flying the craft or if the helicopter was charged or privately owned.

Very unfortunate. Sympathies to the family. CNN has confirmed his passing.

His 13 year old daughter was reportedly also killed in the crash. Horrible.

Watching the raptors game on TV right now. Tip off was about 2 hours after the news broke. You can tell the players, the crowd, the announcers, everybody are devastated. Very few athletes have had as much as a impact to their sport as Kobe.

Has it been disclosed who else died in the crash, other than him and his daughter?

Calabasas is northeast of Malibu, about 20km as the bird flies.

Has it been disclosed who else died in the crash, other than him and his daughter?

some reports now say another parent and daughter from the same youth team as his daughter.  they were taking the helicopter to a game for the kids to play at. 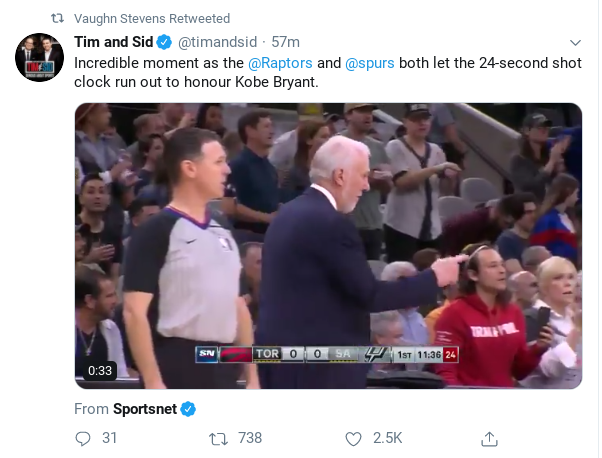 police now say 9 people were killed in the helicopter.

he was an 18-time all-star which is pretty impressive.

Randy Waldman, a helicopter flight instructor who teaches at the nearby Van Nuys airport, said its likely the pilot got disoriented in the fog and the helicopter went into a fatal dive.

"It's a common thing that happens in airplanes and helicopters with people flying with poor visibility," Waldman said. "If you're flying visually, if you get caught in a situation where you can't see out the windshield, the life expectancy of the pilot and the aircraft is maybe 10, 15 seconds, and it happens all the time, and it's really a shame."

Waldman said it was the same thing that happened to John F. Kennedy Jr. when his plane dropped out of the sky near Martha's Vineyard, Massachusetts, in 1999.

"A lot of times somebody who's doing it for a living is pressured to get their client to where they have to go," Waldman said. "They take chances that maybe they shouldn't take."

"Part of it is the way they certify and design these things," said Hoeppner, a retired engineering professor at the University of Utah. "But the other part is helicopter pilots often fly in conditions where they shouldn't be flying."

When that happens, he said, pilots must instantly switch from visual cues to flying the aircraft using only the machine's instruments.

"It's one of the most dangerous conditions you can be in," Kidrick said. "Oftentimes, your body is telling you something different than what the instruments are telling you. You can feel like you're leaning to the left or the right when you're not. If the pilot isn't trained well enough to believe the instruments, you get in a panic situation."

that's quite interesting.  surely these days they could just have a button "level and hold".  drones have this function.

They do, but by the time you’re looking for it you’re already in trouble. This is why VFR flight is so dangerous.

The win streak topped the Calgary Stampeders, who won 14 straight in 2016, for the longest single-season win streak from a major Canadian-based professional team (NBA, NHL, MLB and CFL).