B.C. Ferries is advising customers travelling between Denman Island and Buckley Bay that the last two round trips on Saturday have been cancelled because of a crew shortage.

Maybe not in these far-flung routes. But doesn’t BCF have management that can step in when they are short staff? Maybe the union does not allow. ?

Skeena Queen cancelled round trip 5 pm departure, Swartz -> Fulford due to lack of staff. They haven't cancelled the 9 yet, so I'm assuming they are looking for additional crew at the moment.

Seems like firing unvaccinated workers wasn’t the best idea in this labour market. Though to be fair, it’s a Transport Canada regulation, and BCF wasn’t in favour of it when it was announced.

Well good for us. We filled and had a line out the door. Made up for some of the lost revenue from yesterdays power outage.

Why do these Salt Spring residents moved about so much? The carbon footprint of that island must be off the charts.

It’s bonkers. Speed limit is 80 for the main part of the main road. Leaky septic, floatplane trips, cutting down trees for the “view”, huge trucks and SUV’s, Amazon packages out the wazoo… not to mention the 40 ferry trips a day, lol!

Not to mention the limited public transit and all the infrastructure is geared towards cars. Sidewalks? Bike lanes? Shoulders? Nah!

Don't worry. The organic bracelets made out of arbutus seeds work as a natural carbon offset.

Right on! That's some solid enthusiasm right there.

That was a good story.  Some 18-year-olds should get decent jobs, and the ones they want. 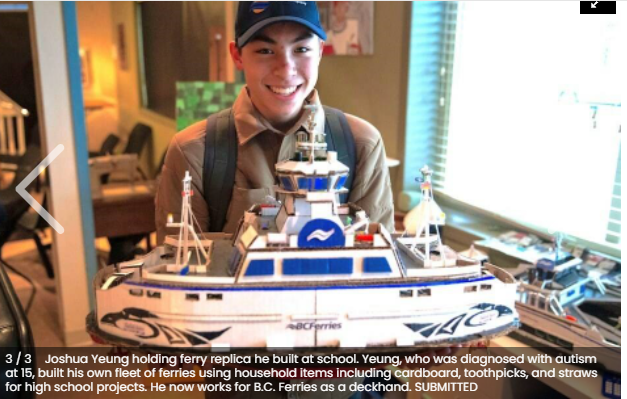 Permit stalling also presents issues for improving the resiliency of B.C.’s supply chain. For example, Collins said most BC Ferries terminals were constructed under 1960’s building codes and could be compromised in the event of a major earthquake.

“We keep them upgraded, but you really need to start from scratch. Every time I talk about starting the Tsawwassen terminal from scratch, I run into those 100 permits again,” Collins said.


I’ll submit though that passenger needs have changed at terminals. With mobile booking and in-car entertainment, why have big terminal buildings and facilities?

When I go to a movie or concert, the check-in takes less than 3 seconds.

According to Collins, BC Ferries’s five primary Island Class ferries – diesel-electric hybrid vessels – will run with nearly zero carbon emissions by 2029 if proper shore charging infrastructure is built at their terminals.

In any infrastructure project undertaken by BC Ferries, however, 20 to 100 government permit processes between provincial and federal ministries each represent potential vetos, he said. At least five projects are currently stalled in the permit process.

“We’re talking to Ottawa saying, ‘are you willing to invest in this infrastructure?’ We’ve been at it for two or three years, and we’re getting crickets,” he said. “Everybody wants to say ‘yes’ and one person can say ‘no’ and everybody’s out. As a society, we’re not going to save the planet if we keep operating like that.”


How much upgrade is required here? New lines in from the closest high tension lines?

A successful B.C. Ferries hiring blitz has brought in 500 new employees in five weeks with the company’s president saying it is leaving “no stone unturned” to add more mariners to its payroll in the wake of numerous sailing cancellations.

The company will announce a cash bonus within a month for staff who bring in certain ­categories of employees, ­president Mark Collins said Thursday after addressing a Greater Victoria Chamber of Commerce meeting.

Plus, “there will be a ­monetary incentive for joining us,” he said. Details were not immediately released.

One of the biggest barriers to hiring is the cost of housing, he said. That has prompted B.C. Ferries to consider the idea of live-aboard ships.

Salish-class vessels, for example, have a full deck of crew cabins and northern vessels have cabins as well, he said, suggesting that a crew member could live in Calgary and come in to work every two weeks.

The company is looking domestically and is ready to hire internationally. About 28 Ukrainian professional mariners are in the pipeline to work for B.C. Ferries, Collins said. “If you’ve got an international qualification and the government of Canada has given you your work permit, I have a job for you.”

So what’s been tripping up BC Transit for an entire decade?

So what’s been tripping up BC Transit for an entire decade?


They haven't found many potential drivers who are willing to live on the buses.

A mechanical problem with the Queen of Cowichan’s navigational system put the vessel an hour behind schedule this morning.

According to a service notice from BC Ferries, the 8:25 a.m. ferry resumed service at 9:25 a.m. from Horseshoe Bay to Departure Bay.

The ferry company initially posted on social media about “an issue with the electronic chart system,” but just before 9 a.m., advised travellers that “paper charts have been sourced and loading will commence shortly.”

B.C. Ferries is adding up to 110 extra sailings to handle increased traffic on the May long weekend.

The ferry company said the recent hiring of more than 500 staff will allow it to add more sailings from Thursday to May 24.

Most of the extra sailings are scheduled for the most popular routes linking Metro Vancouver with Vancouver Island and the Sunshine Coast.

Today wasn’t as busy as yesterday, but just the calm before the storm.

Soccer tournament, Saturday market, sail around, it’s going to be hopping over here and when all these people leave on Monday….

Or burgers and fish and chips....