Just more hypocrisy from Her Worseship.

do they denounce cops shooting that guy?

Why would they?  We don't know the facts.  If anything, from the witness accounts on the Adam Stirling show yesterday, assuming they are true, it appears that multiple non-lethal attempts were made before lethal force was used.

Again, we don't know what happened yet we want to denounce anyways?

Why would they?  We don't know the facts.  If anything, from the witness accounts on the Adam Stirling show yesterday, assuming they are true, it appears that multiple non-lethal attempts were made before lethal force was used.

Again, we don't know what happened yet we want to denounce anyways?

upon whose facts are the politicians relying on with regard to attacks on police?   the female officer wrestled to the ground and kicked and the suspect getting away seems somewhat hard to believe quite frankly.

why did all the non-lethal attempts fail?

What I find interesting is how quickly the concern over public safety has materialized. Just a few months ago Mayor Helps was saying the problem was being created because we kept talking about it. Now she is saying the revolving door criminal justice system is harming her community.

Maybe she can acknowledge how creating a safe haven for the criminally inclined has hurt the community too.

What a horrible person… always pushing ideology under the guise of helping the poor when in fact just being a careerist.

Statement from Mayor Helps and Mayor Desjardins, Co-Chairs of the Victoria and Esquimalt Police Board, on Recent Assaults of VicPD Officers

On behalf of the Victoria and Esquimalt Police Board, we denounce the assaults against VicPD officers that have happened in the past few weeks. VicPD officers are working hard in extraordinarily challenging circumstances to serve all members of our community. They need to be safe as they do their important work.

Let's not forget that Helps is the same person who stated several years ago "These are not criminals, they are just desperate people".

I posted this story here a few months ago.

it just took yet another crazy turn.

An area resident called police after they discovered the replica firearm in a shopping bag outside a multi-unit residential building in the 100-block of Gorge Road East. The replica firearm was hung from a balcony in such a way that it was hidden from view but accessible to someone without needing direct access to the building. A comparison photo of the replica firearm alongside a real firearm is below.

The replica firearm was seized for destruction. There have not been any arrests. 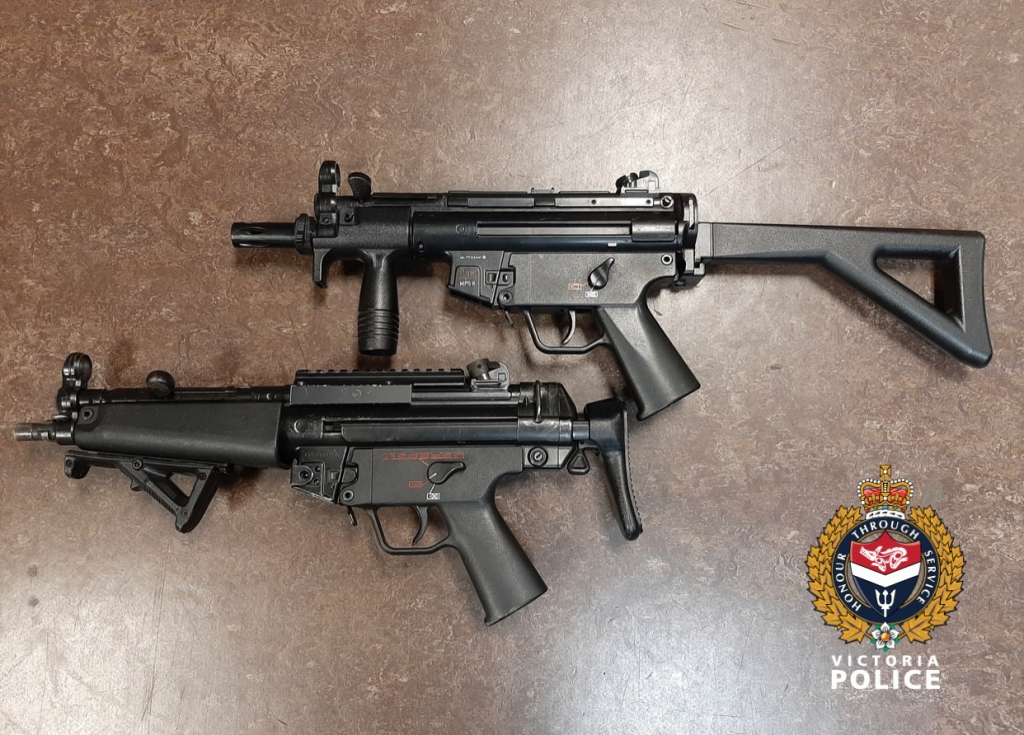 A comparison photograph showing a replica firearm seized by Patrol officers and an actual firearm. The actual firearm is closest to the bottom of the image.

it’s good that VicPD had a real submachine gun handy to compare it to. 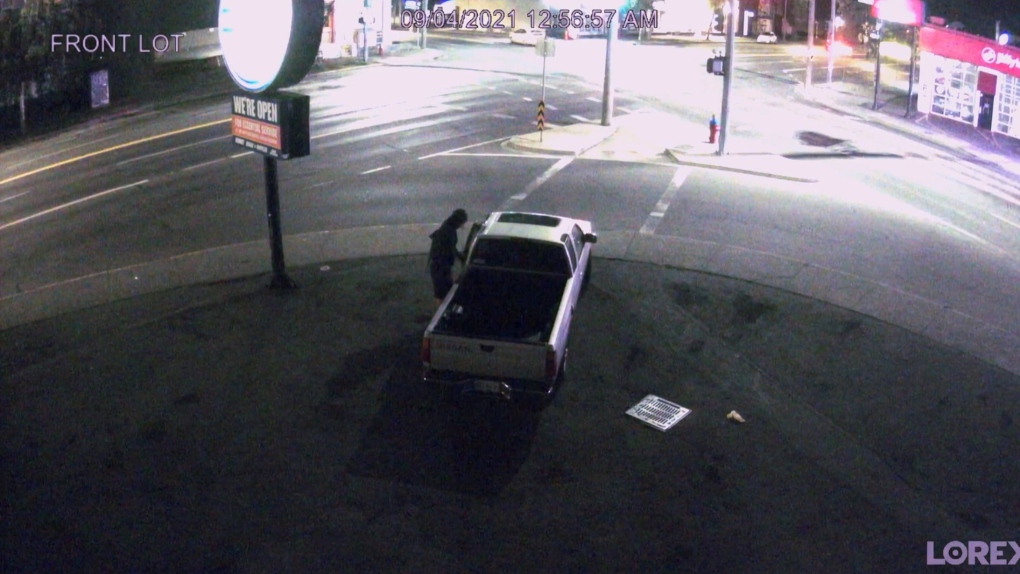 An image from security footage taken by Budget Brake and Muffler on Douglas Street in Victoria allegedly shows a man breaking into a pick-up truck and stealing it.

VICTORIA - Ryan Burghardt owns Budget Break and Muffler on Douglas Street in downtown Victoria. He says a drastic increase in crime is hurting his business.

"Random kicking (of) vehicles, breaking mirrors," said Brughardt. "Unfortunately, on a couple of older vehicles last week, we had two stolen within 24 hours."

He says crime in his Bay Street neighbourhood has exploded over the last two months. He says the people committing these crimes are repeat offenders that he has caught on camera before.

Just down the street at Ina Motors, the car dealership has had four catalytic converters stolen from cars on its lot over the last 45 days.

What I find interesting is how quickly the concern over public safety has materialized. Just a few months ago Mayor Helps was saying the problem was being created because we kept talking about it. Now she is saying the revolving door criminal justice system is harming her community.

I don't think cares about public safety or else she would have spoken up before now. She sees an opportunity to get more money and put more pressure on the fool Eby.

where does one take a catalytic converter to get cash for it? (asking for 4 friends).

what’s in the thing? gold?

One person was shot and killed in the Fairmont Pacific Rim Hotel parkade Wednesday afternoon. Police tape went up outside of the high-end hotel around 3:30 p.m. The Vancouver Police Department says the “brazen” shooting is believed to be targeted, although a spokesperson has not said if it is gang-related.

I don't think cares about public safety or else she would have spoken up before now. She sees an opportunity to get more money and put more pressure on the fool Eby.

Also to deflect the blame … her specialty… and his time it’s the feds’ fault.

where does one take a catalytic converter to get cash for it? (asking for 4 friends).

what’s in the thing? gold?

"Because of the external location and the use of valuable precious metals including platinum, palladium and rhodium, catalytic converters are a target for thieves. The problem is especially common among late-model trucks and SUVs, because of their high ground clearance and easily removed bolt-on catalytic converters. Welded-on converters are also at risk of theft, as they can be easily cut off.[40][41][42] Pipecutters are often used to quietly remove the converter[43][44] but other tools such as a portable reciprocating saw can damage other components of the car, such as the alternator, wiring or fuel lines, with potentially dangerous consequences. Rising metal prices in the U.S. during the 2000s commodities boom led to a significant increase in converter theft. A catalytic converter can cost more than $1,000 to replace, more if the vehicle is damaged during the theft.[45][46]["

A sex offender is released on bail after breaking into his neighbour’s home, leaving Esquimalt residents on edge.

Business owners are forced to replace windows and doors shattered by a man released from custody hours after stealing a Victoria Harbour Ferry vessel.

Victoria police respond to stabbings, robberies, assaults and arsons where knives, crowbars, shovels, axes, bear spray and even a baseball bat studded with nails are the weapons of choice.

A five-year-old boy is slapped in the face by a stranger. An elderly woman is pushed to the ground. A family is confronted at knifepoint in Beacon Hill Park.

For all but the most violent crimes, there’s a tagline in the police community update: “Released on a promise to appear.”

i do not think the "catch and release" issue is the serious problem.

but it's worth asking "where do all these criminals live?"  and that's quite clear.  we invited them all in to live in our social housing.  this is the expected outcome.

Today's TC article on "catch and release" explains a lot of the process. But something’s missing.

The decision to release is made by the primary police investigator, often in consultation with the sergeant in charge of the jail. Sometimes outside agencies, such as the Ministry of Children and Family Development or other police departments, are consulted. ….
Early this year, Manak said, the Crown updated its policy to say that everybody charged with an offence has a fundamental right to bail on reasonable terms and the right not to be denied reasonable bail without just cause.
“Basically, what they’re saying is: ‘If you’re going to hold somebody, you better damn well have a good reason and be able to justify and explain why you’re not releasing the person at the earliest ­opportunity.’ ”
The result is that more and more accused property offenders and criminals will be released, he said.

What’s missing is an explanation of the consequences to the police if they don’t automatically release “more and more” criminals. Are they afraid of spending time in court justifying their decisions to keep people in custody?

No doubt, there will be people who commit serious offences and are released, then commit other offences, said Paisana. That becomes very relevant when they come back for bail a second time.
There’s no requirement for police to release someone, only that consideration be given to the least restrictive form of release, said Paisana. “There’s nothing stopping a police officer from saying: ‘This is far too serious. It will require a judge to rule on your release.’”

So why doesn’t Manak do that? It seems that the police board could give VicPD specific instructions: We order you to send every accused offender with a history of violent crime to a bail hearing, instead of simply releasing them. But that’s not happening. Why not?