I walk that stretch daily and have no fear.

The biggest danger in that area are all the commuters racing into town at 70 km/h on Blanshard.

Danger in what sense?  Like actual, real life-threatening danger?  I wonder how many people are mowed down in that straight, unobstructed portion of Blanshard on a daily basis?  I mean, I know that I'm safe because I clutch my pearls and think of the children as I perambulate that particularly precarious proliferation of pavement.

...If anything take the trees out of the sidewalk...

I'm sure somebody at the CoV started salivating when you posted that.

Perhaps not life-threateningly dangerous, but unfriendly, uninteresting, unpleasant, loud and generally not pedestrian-friendly would be a better way to describe it. I think if the eastern side of Blanshard ever becomes redeveloped, lane reductions here seem to make sense to me.

... If anything take the trees out of the sidewalk...

I'm sure somebody at the CoV started salivating when you posted that.

It's done all the time to make way for bike lanes.

Like Brantastic said, it's unfriendly, uninteresting and unpleasant on the actual straight stretches of sidewalk. The intersections, however, (Caledonia and to a lesser extent Fisgard) are quite dangerous for pedestrians and I've had a few close calls. I've also witnessed the aftermath of a couple of accidents, including a guy in a wheelchair who was hit at Blanshard and North Park. The cutaway on the curb there practically puts someone in a wheelchair right into the traffic lane.

In any event, I'm contrasting the actual danger (pedestrians do get hit by cars) against the hysteria that somehow homeless people are a safety menace and driving people out of downtown (despite the huge increase in downtown residents).

It seems to me that if we're going to add thousands of people to downtown whose main mode is walking, then it's not that controversial to suggest that the pedestrian infrastructure be improved to match the increase in population. And that the CoV should be more responsive to resident taxpayers than out-of-town commuters.

I walked past the excavation for HP2 earlier this morning and noticed that drilling is continuing on the southern (deepest) side, presumably in preparation for more blasting. Any idea how much deeper they plan to go? It seems like they have been working on this forever.

HP1 will really be hemmed in and unobstructed views will be few and far between. Ironic being the tallest in the city that it’s being painted into a corner.

It's taller now! The windows on the top floor are much taller, making it look like less of an abrupt end IMHO. 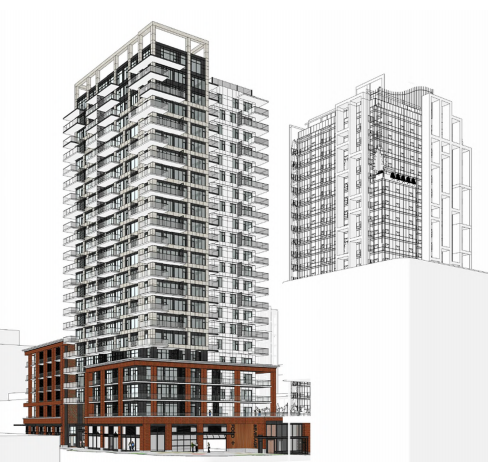 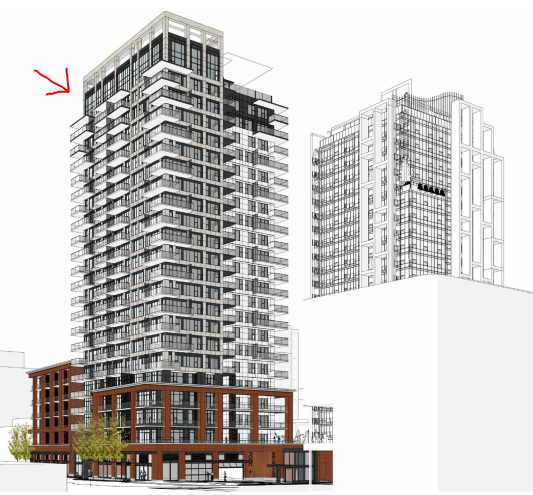 And a rendering for good measure 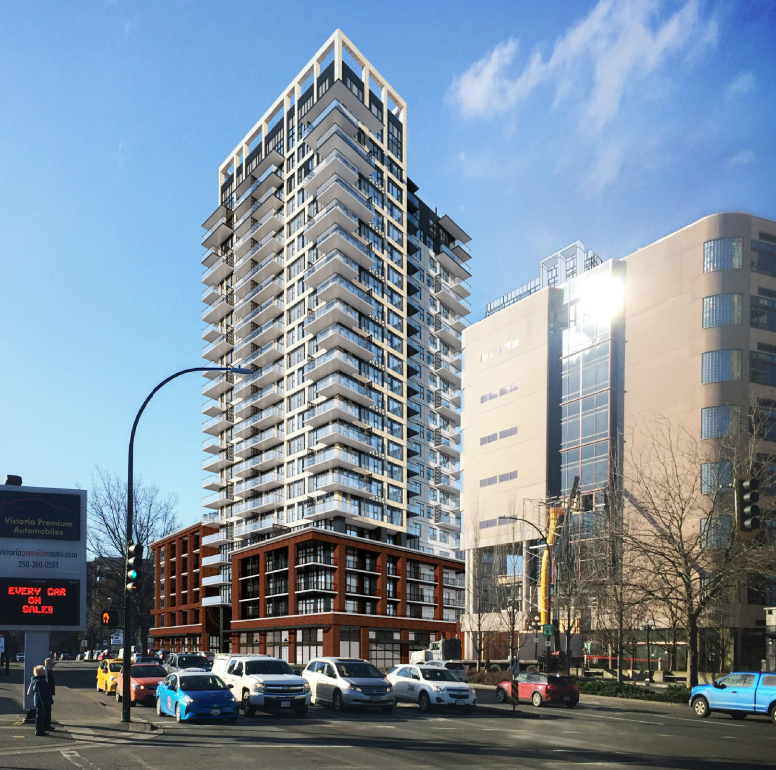 Also, not sure if this has been mentioned before but the plans still include a "WeWork Lounge" in one of the CRUs

I dunno, this will be our twin towers.

The joy of building on hills, and calculating building height from site grade. HP1 is 25 storeys, HP2 is 23 storeys, but the top of roof is almost exactly the same (technically, HP2 is taller with the double height ceiling!). It's the architectural height that pushes HP1 above HP2.

I am still not 100% sold on the podium section, but the increased height on the top floor is nice.

Here's a rather unique feature of HP2. It's a "pre-vegetated" roof in Hudson Bay inspired colours. 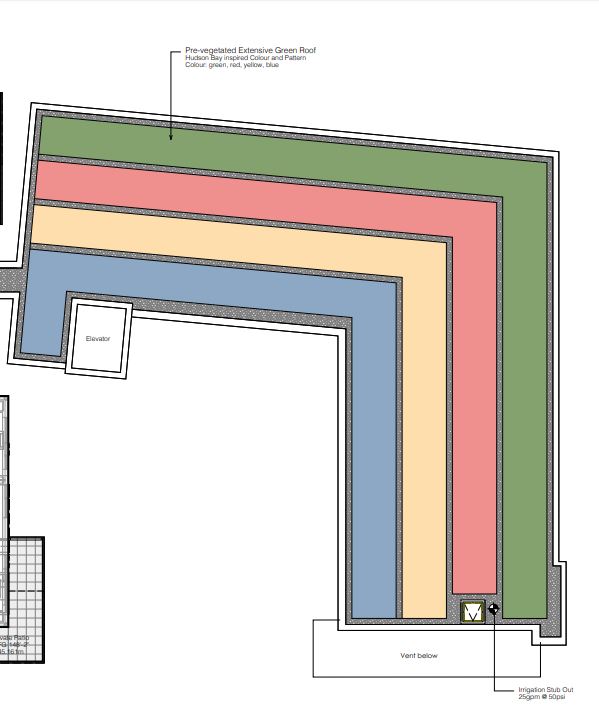 It will top off the 6-storey section of the podium.

The design has changed yet again, and the project is now officially proceeding as a rental in lieu of a condo. Earlier posts on this page show the prior designs. 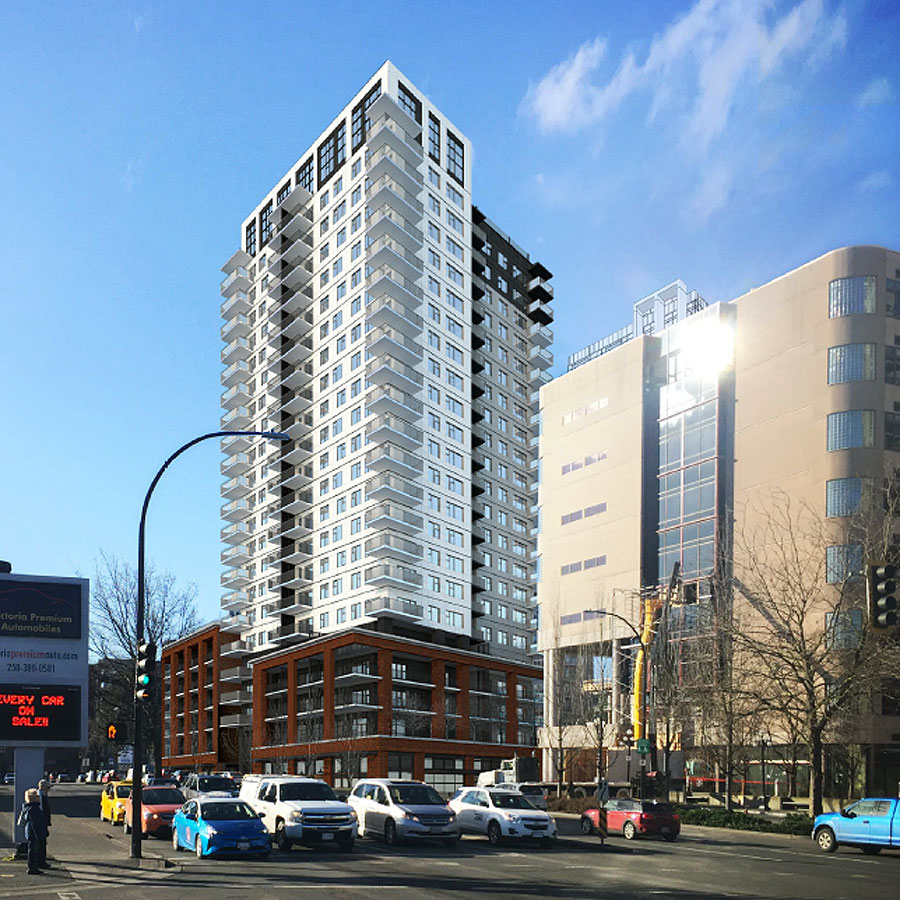 The April 10 version was pretty good but this version has really gone backwards. They've dialed down the personality and dialed up the bland. The monotony of those plain windows just looks lame. The tower had strong lines before, if you get my meaning. Those lines are gone now. It's just flat and blah.

Seriously, I would take no joy in seeing that building go up.

What the f kind of cut-and-paste crap is this now.

I concur with aastra and Rob. This one has taken a giant leap backwards.