I understand a mma vaccine fights the virus using a roundhouse kick to the head.

I understand a mma vaccine fights the virus using a roundhouse kick to the head.

put your reading glasses on.

B.C. health officials announced 742 new cases of COVID-19 and one more death over the last four days, an average of 185 new cases a day.

The province's seven-day rolling average increased 32 per cent to 196, the highest it's been since June 5.

As political parties prepare to hit the campaign trail for what could be a mid-pandemic election, all of the major political leaders have received their second doses — except one.

B.C. health officials announced 742 new cases of COVID-19 and one more death over the last four days, an average of 185 new cases a day.

The province's seven-day rolling average increased 32 per cent to 196, the highest it's been since June 5.

As political parties prepare to hit the campaign trail for what could be a mid-pandemic election, all of the major political leaders have received their second doses — except one.

The numbers are not heading in the right direction.

Cases on the rise here and in the US so we decide to open the land border on Monday. Guess the election takes priority over everything now.

So does that mean if he infects someone, and they die, he doesn't care?

some people do not want to take an experimental vaccine. why can’t some people understand that?

some people do not want to take an experimental vaccine. why can’t some people understand that?

If the vaccine kills everyone and the only ones left on earth are people like Maxime Bernier and RFK Jr. then I'd be glad I'm dead.

if it’s so damn safe why don’t we give it to kids like we give kids all kinds of other vaccines?

there is nothing stopping individual countries from ignoring the manufacturers recommendations and just injecting it into kids. just like we did for mixing.

but somehow when people say it’s “safe” they are not saying it’s safe enough for children.

Canada only had 7 deaths today. 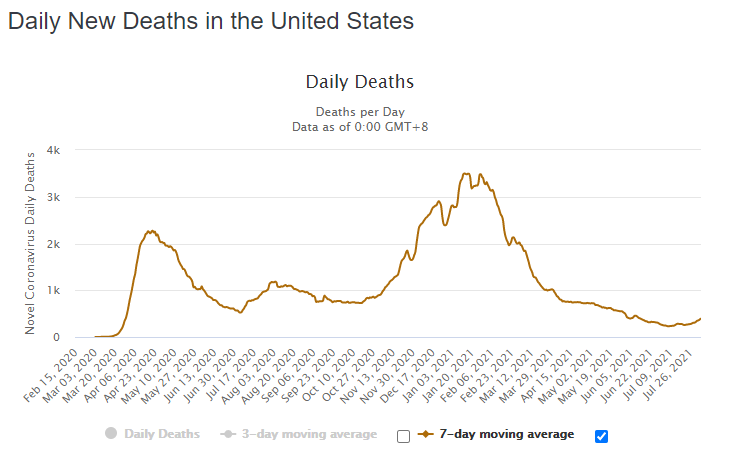 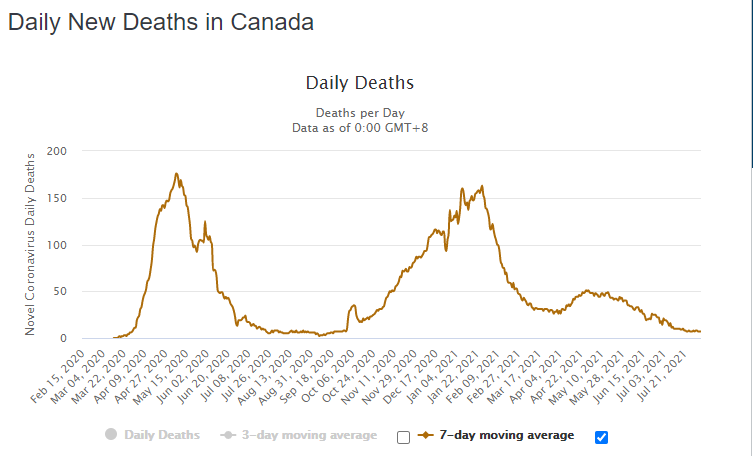 Negativity seems to be the only thing we hear from media and public officials about the virus: an endless narrative of more fear, more warnings and more coming waves. Throughout the pandemic, Canada has acted entirely out of proportion to the problem. And now we’re being warned that, with the delta variant, the worst may still be to come, while rare “breakthrough” infections and “long COVID” are played up for scary headlines. Infectious disease specialist Martha Fulford joins Anthony to discuss why it’s time to accept that the vaccines have defanged the virus, to stop being terrified and to move on with our lives.

…it’s time… to stop being terrified…


Do you think everyone is terrified?

Of course, nobody is literally "terrified" of the virus. People have varying levels of concern. Some people are overly concerned. But an article that condemns fear mongering by using their own silly fear words is a joke.

There is way too much fear.

During the height of the pandemic, as scientists worldwide raced to develop a vaccine, hydroxychloroquine (HCQ) emerged as a flashpoint of controversy. Pitting proponents of using the drug to fight COVID-19 against skeptics citing a lack of evidence of efficacy, the debate spilled into public view, polarizing national and international opinion.

Now, a new study published in the journal DNA Repair shows, for the first time, HCQ's genotoxicity in mammalian cells. The study was led by Ahmad Besaratinia, Ph.D., professor of research in the Department of Population and Public Health Sciences at the Keck School of Medicine of USC.

"The uproar over HCQ drew our group's attention, and we realized that, although the drug has been widely used for the treatment of diseases ranging from malaria to rheumatoid arthritis, its exact mechanisms of action are only beginning to be understood," Besaratinia says. "Most importantly, there was no data on whether HCQ has adverse effects on the genome."

Our reader GM is not happy that the possible very big downside of a recent Covid discovery is not being taken seriously. Lots of nasty new variants of Covid have been found in New York City wastewater. They appear to come from rats.

Now so far, there is no evidence that one of these rat Covid variants has jumped species to humans. But as we’ll explain, were that to happen, it could be Seriously Bad. Many of these variants are novel and have the potential to escape current vaccines.

But the reaction to the wastewater study has been underwhelming. And the US already does one of the worst jobs of any advanced economy in terms of sequencing Covid cases to determine the prevalence and spread of variants. So if a ratty Covid were to infect humans, the US would be late to work that out.

From a preprint in MedRxIV, Tracking Cryptic SARS-CoV-2 Lineages Detected in NYC Wastewater:

To monitor New York City (NYC) for the presence of novel variants, we amplified regions of the SARS-CoV-2 Spike protein gene from RNA acquired from all 14 NYC wastewater treatment plants (WWTPs) and ascertained the diversity of lineages from these samples using high throughput sequencing. Here we report the detection and increasing frequencies of novel SARS-CoV-2 lineages not recognized in GISAIDs EpiCoV database. These lineages contain mutations rarely observed in clinical samples, including Q493K, Q498Y, H519N and T572N. Many of these mutations were found to expand the tropism of SARS-CoV-2 pseudoviruses by allowing infection of cells expressing the human, mouse, or rat ACE2 receptor. In addition, pseudoviruses containing the Spike amino acid sequence of these lineages were found to be resistant to many different classes of receptor binding domain (RBD) binding neutralizing monoclonal antibodies. We offer several hypotheses for the anomalous presence of these mutations, including the possibility of a non-human animal reservoir.

1st cruise ship docks in Puerto Rico since pandemic began
Ship was traveling at 70% capacity, with some 4,500 people aboard
https://www.nanaimob...pandemic-began/

The woman who co-created the AstraZeneca vaccine is now represented as a Barbie doll and wants to inspire kids to pursue science
https://www.business...-careers-2021-8

Philippine President Rodrigo Duterte has admitted that the United States’ donations of COVID-19 vaccines prompted him to save the two nations’ Visiting Forces Agreement (VFA), an important defense pact that he has repeatedly threatened to scrap.

“We did a give and take. We thank them and I made a concession. I conceded the continuance of the Visiting Forces Agreement, in gratitude,” Duterte said in a televised address on Monday, according to Rappler’s translation of his comments.

A crucial element of the security alliance between Manila and Washington, the VFA lays out rules for the deployment of U.S. troops in the Philippines, and has gained increasing importance in the light of China’s increasingly assertive actions in the South China Sea.

President Rodrigo Duterte announced the tanking of the VFA in February 2020, after a close ally was refused a U.S. visa. But the Philippine leader held off on putting the final nail in the agreement’s coffin, announcing three successive six-month stays of the cancelation.

Last week, Philippine Defense Secretary Delfin Lorenzana announced that Duterte canceled the termination of the agreement between Manila and Washington after his meeting with U.S. Defense Secretary Lloyd Austin. The move stabilized the U.S.-Philippine alliance that has been rocked by the Philippine leader’s shoot-from-the-hip governing style.

BRUSSELS, August 3. /TASS/. The European Commission’s decision to consider COVID-19 certificates issued by San Marino, where Russia’s Sputnik V vaccine was widely used, equivalent to the EU Digital COVID Certificate doesn’t mean the authorization of this vaccine in the European Union and it is up to each member country to decide whether to recognize such certificates on its territory or not, a Commission official told TASS on Tuesday.
https://tass.com/society/1322335

Health authorities reported 71 domestic cases on Wednesday, the highest since January, as China battles its largest outbreak in months by testing entire cities and locking down millions.
https://www.france24...-six-month-high

Amid the latest surge in covid-19 cases and hospitalizations, the United States on Tuesday hit a milestone that some thought was unattainable: 90% of people 65 and older are at least partly vaccinated against the disease.

That's more than 49 million seniors vaccinated. Overall, 70% of adults have been inoculated, at least partly, and nearly 68% of people over 12.

"This really shows our elders are wiser than the rest of us," said Dr. David Wohl, professor of medicine in the division of infectious diseases and director of the vaccine clinics at the University of North Carolina School of Medicine.

Wohl said political leanings that have skewed vaccination rates across the country have had much less of an impact on older adults. "The threat of covid-19 is so real for those 65 and over that it transcends many of the other issues that are complicating vaccination rates," he said. "Wisdom and fear have really led to impressive immunization rates."

FDA likely to grant final approval to Pfizer vaccine by ‘Labor Day or sooner’ – ending excuse for 3 in 10 unvaccinated
https://www.rawstory...0-unvaccinated/

Canada passes Israel for giving out vaccines but you could make the argument Israel is doing better since they have a much younger population.

Some will argue Canada has failed because we didn't vaccinate everyone on day one..


11 user(s) are reading this topic