[Downtown] Douglas and Caledonia | Rental, condo | Up to 21-storeys

And the 90 units of supportive housing are going to be on the north side of Discovery Street on the surface lot.  The main development site will have 167 market rentals, 167 workforce housing affordable rentals, and 167 market condos.  This leaves us with a combined proposal of 591 units of housing, of which 56.5% of *all units proposed* are non-market units in some form or fashion.

I’m sure the condos will be as far as possible from the homeless housing.

I’m sure the condos will be as far as possible from the homeless housing.

This is a super-quiet side street with a heritage house in the middle of it. So why are the modern developments putting lots of blank walls and unapproachable/unengaging frontages along it?

A formal rezoning application was filed this week.

Details (including detailed plans) can be found online at :

Very pretty once it's been run through a rendering.

I hope these initial renderings are more accurate than what happened with Hudson Place 2.

woah, this looks great! Better than I imagined.

I know that I should love them, but I am getting a little bored of corner plazas. I mean we have the one outside Save-On. Apparently one coming to the new Mazda proposal at Yates and Cook. The one at Douglas and Pandora and now this one.

Also I have to say these buildings are super boring. Hopefully they can do a little better. What is with the beige-ey banana pillars at the more northern building? Looks like a perfect place to have an insurance office or maybe some sort of investment place...

^ I agree. I am getting more and more worried about it as it goes up. Hudson Place 1 was just too nice I suppose. I just don't think we can let that type of place proliferate when making it better does not have to be more expensive. It is just a lack of creativity.

Even though they seem to be fairly ordinary residential towers I'm still feeling pleasantly surprised. I'm not seeing anything that would lead me to bemoan the CoV's negative influences re: the design aspect. There's even a decent resolution of the top few levels of the main tower, which is always preferable to the graceless & arbitrary chop from Victoria's height-restriction laser. But on the ground level that de-urbanized corner treatment seems to be yet another chapter in the longstanding effort to re-interpret & re-envision Douglas Street's identity as a quintessential downtown street. Why do we feel the need to do that sort of thing?

If that corner doesn't work then we'll have no less than five re-interpretative misfires over five blocks:

Meanwhile, the HBC, the Douglas Hotel, and the Fairfield Block are still patiently showing us how things could (and should) be done, but nobody is particularly interested in following their example. Centra Gas gave it a shot a long time ago, but that's it.

I don't know. I suppose that corner could work, if future redevelopments on the other corners of Douglas/Caledonia go back to the fundamentals. But I guess I'm not very confident that those hypothetical future developments won't also try to re-invent what works rather than simply doing what works.

I don't want to sound too negative. The towers aren't twins, which is great. The podiums are decent and they're also distinguished from one another. The podiums don't just repeat the same flavour all the way around even though it's one big unified project.

I'm also wondering about that recessed deck and what it could be used for. Obviously in an ideal world there would be a destination pub/restaurant in there, and the deck would be fantastic. But in reality...

I don't give the Centra Gas building enough credit. When it was first proposed I was disappointed because I thought it would be way too short. But upon further review all these decades later I have to award them many points for getting so many things right. They had a solid understanding of the context. They weren't trying to diminish Douglas Street by re-envisioning it in a contrarian manner. The were trying to enhance Douglas Street and restore some of its lost "main street" status and prestige. pic by the enigmatic & mysterious "JohnnyJayEh" at flickr.com

And all these decades later it still stares out at a disposable one-storey architectural affront to a Main Street vibe.

Sometimes I wonder whether our pursuit of perfection at each individual parcel loses the forest for the trees. Is the Caledonia project’s plaza better than the 60s era woodframe motel, the empty lot and the sub-sidewalk surface parking affair rounding out the rest of that intersection which is a de-facto entrance to downtown Victoria? Cuz at the end of the day we still live in a small city, and it could take decades more to replace lots of ugly stuff dominating no matter what we do with new stuff. And I’ll take a Caledonia plaza treatment any day over another decade of a Traveller’s Inn built to the lot line.

I don't give the Centra Gas building enough credit...I have to award them many points for getting so many things right. They had a solid understanding of the context....

Few contemporary projects in the CoV have achieved cohesion with their surroundings as well as the Centra Gas building.

...Sometimes I wonder whether our pursuit of perfection at each individual parcel loses the forest for the trees. Is the Caledonia project’s plaza better than the 60s era wood frame motel...

It's not that this proposal isn't superior to what it will be replacing, but I think people wonder why a plaza is even part of the equation.

Cuz at the end of the day we still live in a small city, and it could take decades more to replace lots of ugly stuff...

*don't even think about the side streets and the blocks nobody cares about in the north downtown & upper Douglas area... because those are going to require a thousand years, at least

It's not that this proposal isn't superior to what it will be replacing, but I think people wonder why a plaza is even part of the equation.

Like I say, maybe that corner treatment could work. But my question is: why are we even trying to do something goofy and contrarian there? Consider the old buildings at Douglas & Bay or Douglas & Hillside. When Victorians were putting up those buildings 100+ years ago were they assuming the downtown vibe would terminate abruptly at Caledonia? Of course not. So why are Victorians today so determined to make it so?

Back when Chard's Juliet was still fairly new I was in the habit of photoshopping it all over town to see how it might fit here or there. I actually thought it could work very well at this intersection. It just seemed like the right kind of feel, and a decent supporting player for the HBC. I think an open corner on the White Spot property would have a better chance of succeeding if something like the Juliet's conventional/traditional ground floor were directly across the street. We've talked about this so many times before: gaping holes and exceptional open spaces only work when they are indeed the exception. If blowing things open and doing something contrarian becomes the go-to approach on every block... then those new spaces tend to fail miserably. 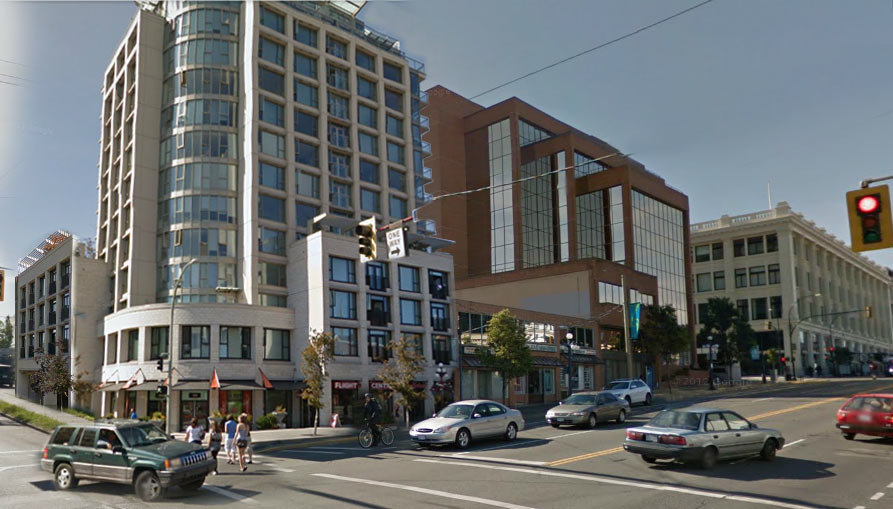 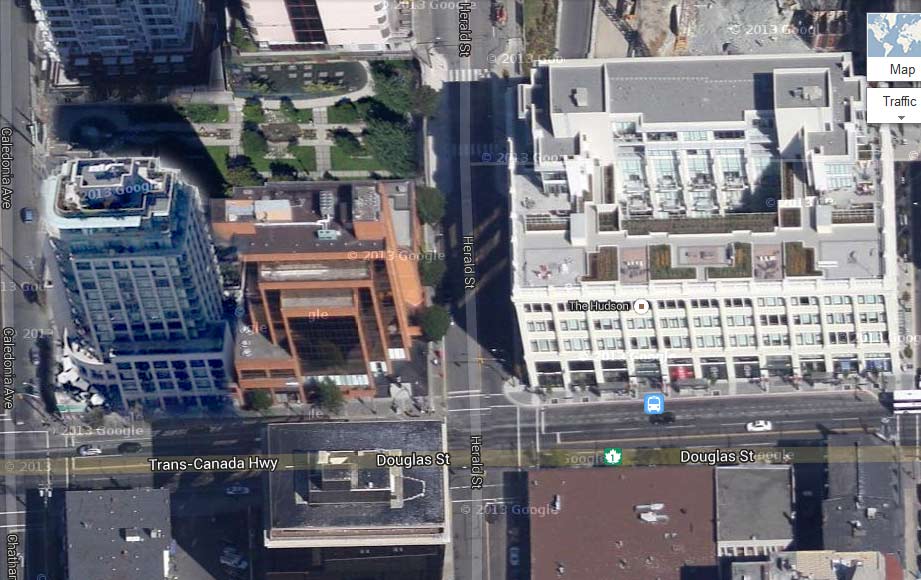