There isn't a single human being using that green space in this streetview image. If it is so coveted, why is nobody there?

Meanwhile across the street on the high school property people are actually using that field.

I bet people would use that green space if there were wifi, a few usb charging ports and a couple benches.

I bet people would use that green space if there were wifi, a few usb charging ports and a couple benches.

And perhaps if the fence was removed, the grass cut and pathways installed. You know like an actual park.

And perhaps if the fence was removed, the grass cut and pathways installed. You know like an actual park.

One of the great things about Greater Victoria is all the green space. This is a case where I think we can afford to lose a crappy field, but I hope we replace a significant portion of that field with good 'green space'. I'll take some good green space over a whole bunch of crappy field.

a mix of uses couldn't be a bad thing here, with quadra village on one side & blanshard court on the other

The hospital district announced the purchase of the 1.4-hectare property at 955 Hillside two years ago but that purchase didn’t include the parcel of land on which the school building sits and is currently leased to a private post-secondary education company.

No specific project is planned for the site at 950 Kings and its long-term development will be subject to further planning and community consultations, the hospital district said in a statement. Some of the property will be used during the Summit’s construction as a staging ground for construction materials, meeting space and for parking.

Victoria Coun. Ben Isitt, council liaison to the Hillside-Quadra neighbourhood, and a member of the hospital board, hopes some space, including possibly the school gym as well as green space might be made available to the community.

Today's news has VIHA buying the school building and parking lot for $5.8M.

No specific project is planned for the site at 950 Kings and its long-term development will be subject to further planning and community consultations, the hospital district said in a statement. Some of the property will be used during the Summit’s construction as a staging ground for construction materials, meeting space and for parking.

Currently, the field at Hillside Avenue is the closest area for children to play, with the next closest park being Topaz Park, to serve the hundreds of kids and youth in the densely-populated block between Hillside, Quadra and Blanshard streets.

“This green space is of great importance to the healthy function of the community. If the development goes in the way it’s set out so far, the chances of meaningful, functional green space is limited,” Greenwell said, adding they also have concerns about increasing traffic and parking availability.

“There has to be innovation and creativity and a shared idea of green space that residents with their loved ones who are visiting and neighbourhood residents can access.”

Maurice Rachwalski, project director with the Summit, said zoning only allows the seniors facility to cover 40 per cent of the site, meaning 60 per cent would not be covered by the building.

Selling the former Blanshard Elementary School building at a time when district enrolment is rising would be short-sighted, says the president of the Greater Victoria Teachers’ Association.

District enrolment rose by about 400 students in September 2015.

“These are lands that we can’t get back,” Benula Larsen said. “With enrolment going up, this is the time to talk about it and what it is that we need to do.”

Should the current deal go through, the hospital district will allow the school’s current tenant, Vancouver Career College (Burnaby) Inc., to stay for five more years.

Larsen noted that rentals are working well at other closed schools.

“It’s great because they’re not selling them,” she said. “This is a time we need to hold off with Blanshard and we need to have the conversation with [district] facilities, with B.C. Housing, as well. This has to become a priority.”

The sale of the former Blanshard Elementary School to the Capital Regional Hospital District — which was opposed by the Greater Victoria Teachers’ Association — has been finalized.

Greater Victoria school board vice-chairwoman Diane McNally said the sale was contingent on approval from the Ministry of Education, which has now been received. The deal applies to the school and the grounds directly around it.

GVTA president Benula Larsen said last week that the sale should be reconsidered, noting that enrolment in the district was up in September by about 400 students. However, district superintendent Piet Langstraat said projections indicated that the school, would not be needed.

The hospital district reached an agreement for the bulk of the school property, the 1.4-hectare field portion bordering Hillside Avenue, in 2013. The school district received $500,000 for each section of the site. The remaining cost — $6.0 million for the field area and $5.3 million for the building area — is to purchase the balance of the lease, which was held by private interests.

Just read about this in the TC - this would've been a great Cool Aid option. Out of the core, not too much residential there - at least not much that doesn't have it's own problems already.

Just read about this in the TC - this would've been a great Cool Aid option. Out of the core, not too much residential there - at least not much that doesn't have it's own problems already.

You realize that the Summit is part of a set of buildings that are replacing Mt Edwards Court? (and Oak Bay Lodge, Central Care Home and Tolmie Lodge). http://www.baptistho...heights-mt-view

(the other building was supposed to be a new Oak Bay Lodge, but then Oak Bay turned it down so it became the Summit)

oh boy this would be ridiculous on that block of hillside 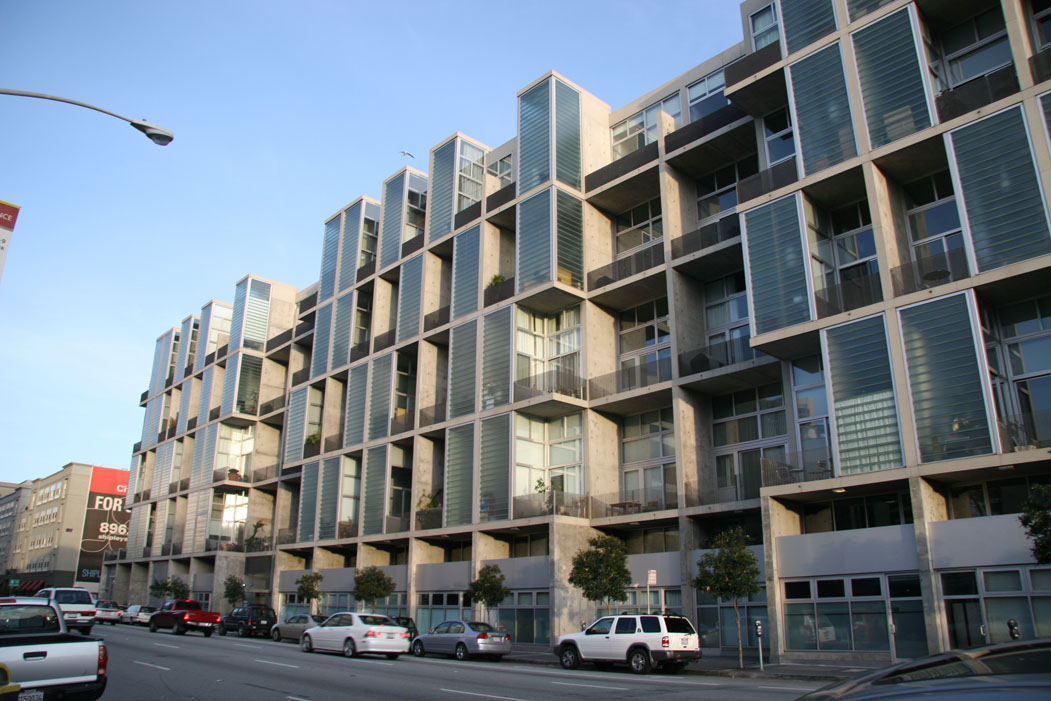 unitech has a pic on their website under their news

unitech has a pic on their website under their news 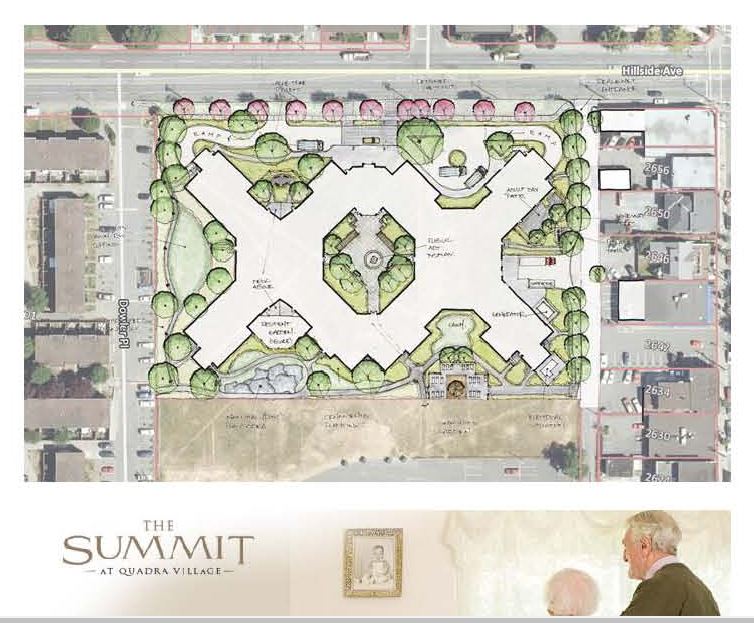 For whatever reason the CRD has been very secretive regarding the design of this thing. I'm going to assume it's not going to be a looker.

Assuming Unitech's rendering above is at all accurate, it would appear the shape will at least be interesting. "XX" is certainly more appealing than a rectangular shoe box.

(Maybe not always always... the one on the Selkirk is pretty good.)

With pretty much zero possibility of ground floor commercial and in order to create a semblance of privacy for the residents, I have no objections to little street engagement for this particular project in this location.

It's going to be a mix between the Royal Jubilee's new patient tower and the Carey Road seniors facility.

It's going to be a mix between the Royal Jubilee's new patient tower and the Carey Road seniors facility.

With regard to the latter our mother has been a resident at the Campus of Care/Carey Road for a little over a year.

Although I get where this broader conversation is going specifically with respect to the proposed Blanshard site, let me provide some perspective from the standpoint of a family now in its 10th year of a struggle with Alzheimer's viz these "institutions".

Without question for those residents and particularity their families it is *all* about the quality of care and the security/privacy of your loved one - period, end sentence. All other considerations aren't even secondary, they frankly aren't considerations at all. To quote my late dad neither the resident (especially if they suffer from Alzheimer's!) nor the family could give a "tinker's damn" about "street interaction". These facilities by definition are for the most part ultimately for end of life care and preparing for the death of a family member. Personally I could care not if the building "interacts with the street" or whether there are "amenities" like coffee shops. What we do care about is that our loved one can live in such a facility with dignity, where she is respected as an individual and cared for and well treated, and where she is safe and can live without fear.

As most of the resident's of these facilities suffer from one form of dementia or another - and all the attendant fear, misunderstanding and dread that goes along with that condition - whether the facility proffers up access to a Starbucks or not is something to which residents and families are completely indifferent, given other just slightly more pressing priorities.....