If I were them, given the state of the world today, I would have elected to stay in orbit.

NASA and Elon Musk’s SpaceX successfully launched four astronauts to the International Space Station from Florida on Wednesday night after repeated delays due to weather and an undisclosed astronaut medical condition.

The SpaceX Falcon 9 rocket and Crew Dragon capsule rose into the cloudy night sky as planned at 9:03 p.m. EST from Complex 39A at Kennedy Space Center. Clouds glowed bright in a large area of the sky above the pad, lit by the rocket’s fiery exhaust plume.

Glen de Vries, a businessman who flew to space last month with Jeff Bezos' company Blue Origin, died in a small plane crash on Thursday. He was 49, according to New Jersey State Police.

A new type of rocket-launching system just got off the ground.

The California-based company SpinLaunch performed the test flight of its novel kinetic-energy-based launch system in New Mexico on Oct. 22, reaching an altitude of "tens of thousands of feet," CEO Jonathan Yaney told CNBC, which first reported the successful launch test. You can see footage of the flight here.

The company has received more than $110 million in venture capital for its system, which spins up a small rocket to hypersonic speed on the ground. Once released, the final design calls for the rocket to shoot up in the air, and only turning on more conventional chemical propulsion when it's well on its way to orbit.

Other parts of the business are still under development, too. The company is seeking a more "coastal location" than Spaceport America for its eventual operational launches, which would be "able to support dozens of launches per day," Yaney told CNBC.

this thing works up to 10,000Gs before it is released.

Rest of the rocket is off to deflect an asteroid in 10 months.

Michael Strahan is going to space, for free. 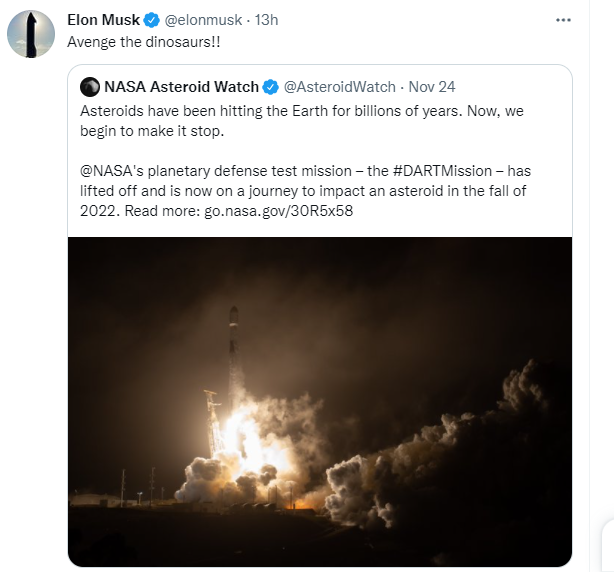