Found the signage to be poor myself

^ Me too. The signage should scream in big letters, Ferry This Way!!

Maybe you guys should write the Ministry. They may not be aware of the issue and clearly this is affecting a lot of people.

I guess because I use my GPS heavily while in the lower mainland, I haven't really paid close attention to the signage. But it sounds problematic. I agree the view sucks.

I guess because I use my GPS heavily while in the lower mainland, I haven't really paid close attention to the signage. But it sounds problematic. I agree the view sucks.

My GPS showed us proceeding into no man's land with nary a road in sight until it thought we were on River Road.

Looks nice, I should go there!

Where was that where those girls went swimming (cliff jumping)?

Ya, I think it's pretty good.  Two guys riding bikes at the end with no helmets, technically legal I guess since they are in a park.  If you are allowed to ride on that pathway.

I do find it funny at the end however where you witness two people biking along the Dallas Rd path ILLEGALLY. Is this my permission slip to do the same?

Edit: Missed VHF's comments. No you are not allowed to bike on that path.

Why no shots of Centennial Square? When I rode the bus in yesterday afternoon from the ferries as we pulled up to the City Hall stop there was a particularly large gathering on the lawn. One girl, obviously a visitor, exclaimed "whoa," as she saw the mess. Great way to welcome your visitors, Victoria.

Why no shots of Centennial Square? When I rode the bus in yesterday afternoon from the ferries as we pulled up to the City Hall stop there was a particularly large gathering on the lawn. One girl, obviously a visitor, exclaimed "whoa," as she saw the mess. Great way to welcome your visitors, Victoria.

I would be inclined to expand on the question and ask why no shots - perhaps from the air - of the city proper? Once again this is yet another homage to the same old (tired) tried and true: if you weren't from here honestly would you guess there was actually a bricks and mortar city "behind" the Empress Hotel? I get it, we have and market as our crown jewel centrepiece an old hotel. But there is in fact a "city" here as well....

I agree 100% and that's always something that I notice when they promote Victoria. It's glaring. They work so damn hard to avoid showing the city. Folks, go out around town and shoot a lot of photographs and video and I guarantee you, you're going to get some establishing shots of the city in general or of the Songhees or south downtown or the Selkirk waterfront, etc. You're going to get some pics of buildings, for crying out loud.

When I watch this video I don't see a specific place. It's as if the place is irrelevant. I see people talking to the camera, I see people walking and doing stuff, I see crowds and events, but exactly where are these things happening? A beach here, a street there, a forest trail... is this a montage of no place in particular? Stock video footage of people doing things and enjoying themselves? (Okay, there's a shot of kayakers in the harbour that reveals the Empress Hotel and the Belmont building and there's another shot later of almost the exact same thing at dusk, but that's really it for the entire video... and yet Sidney earns a quick establishing shot for some reason, just as it always seems to earn an establishing shot and/or aerial in the printed guides.)

Meanwhile, literally every other tourism guide/video/website for every other locale -- from cities of millions to towns of a few thousand -- will make sure that they show the place.They'll flaunt the place. An establishing shot of the city core, maybe an aerial, maybe a skyline shot... why the heck wouldn't they? It's becoming especially ridiculous in Victoria's case because (for example) the view of the city core from Harbour Towers or the Hotel Grand Pacific is very striking and unique. The Songhees from Fisherman's Wharf is looking darned good now. Dockside Green or the Selkirk waterfront or Oak Bay's waterfront from Willows Beach or the city in general from Mt. Tolmie... all very nice perspectives. And is there any perspective more unique than an aerial view that reveals the harbour and the old city core and the green neighbourhoods and the islands and the ocean and the homes perched on rocky hills above the shore and the distant mountains, etc?

It just makes no sense to me to be so keen to strip the city out of the equation. The city is what it's all about. Do people actually think all of those coffee shops and restaurants and outdoor symphonies etc. would be there at all if the city didn't exist? Those things are products of the city, period. Heck, the petting zoo is such a big deal precisely because it's a petting zoo in the heart of the city.

I feel like they're torn. The old tourist trap gimmicks are dead and buried, no doubt. They're eager to sell the unique west coast urban scene, and rightfully so because that's really what it's all about now. But there's some odd inhibition that's preventing them from going all the way with it. So they present the appealing urban attributes as if they exist in a vacuum. All of those good things are there by chance. There's no context, the city didn't produce them. The city had nothing to do with it. Thus, we prefer to act as if the city doesn't even exist because it's really not relevant at all.

(I also thought Uptown was conspicuous for its absence. There's not even a quick glimpse, is there? Is there some rift between them and Tourism Victoria?)*

That's about the #1 surprise I hear from visitors, that there's actually a CITY here.  A place.  Which is actually fairly rare on this continent outside of a handful of places.  There's a million places you can do and see all the things in the video, but what makes Victoria special is that it's a place, its a dense walkable city.  You don't need to drive around for hours to see everything.  So many places are just a bunch of destinations with void between them, highway, roads, strip malls, suburbia.  Victoria is a very connected and cohesive place, the core anyways.  I think that core is our best asset and what we need to show off.  You can ride a bike or go whale watching or go hiking or see some event anywhere up and down the entire west coast.  Show what makes Victoria special, show VICTORIA as a place, not a bunch of disjointed and utterly generic activities.

Meanwhile at the entrance of our hotel was this tourism pamphlet stand with the biggest pamphlets proudly advertising NANAIMO and WASHINGTON. Nothing and I mean nothing on that entire stand marketed a single thing about Victoria save for one pamphlet lost in translation for Butchart Gardens. Lame lame lame lame, Tourism Victoria (and hell, BC FERRIES, too!).

Tourism Victoria, you've got millions of visitors flocking to Vancouver every year who are literally on your doorstep and looking for things to do but you leave them virtually clueless and confused about this place?  Good grief. 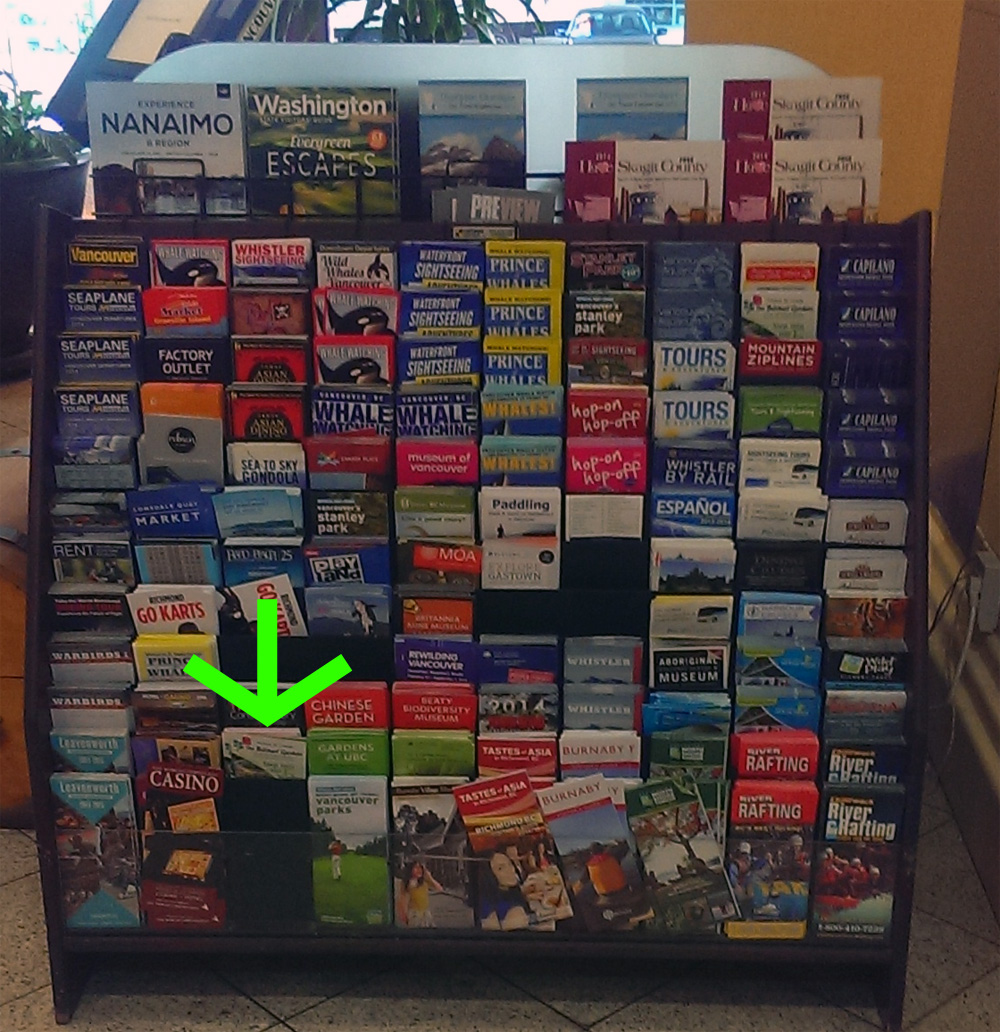 Victoria is a very connected and cohesive place...

I think this is very obvious (despite the political fragmentation), and that's why I find this effort to blur Victoria into something vague and amorphous to be so inexplicable. Victoria is a city, and a compact one at that. Victoria is not California's Central Coast. Victoria is one city. One place. Yes, there's a ton of stuff to see and do. Yes, there's a lot of variety within it. But it's still one place.

Read the reviews of the Oak Bay Beach Hotel and note how tourists are aware that the hotel is outside of downtown, yet still very close to downtown. Downtown Victoria, they mean (of course).

I'm actually inclined to wonder if there's some political interference behind this. I mentioned before how "Capital Regional District" is a destination over at TripAdvisor.com. It's nonsensical and absurd and surely very confusing for tourists and locals alike, and yet it's there.

The Island is only about 450km long straight line

Ok sure. My point is 500km to drive from one tip to the other and back isn't exactly a one-day excursion. Most visitors have no idea what they're getting themselves into and aren't prepared to make the best of even the south Island until they return.

Use the page links at the lower-left to go to the next page to read additional posts.
Back to Victoria and South Island Economy