If you need a reason to not cruise in the left lane....

It was raining hard at the time, I believe. And with this being the first rainfall of the season film, oils and other contaminants on the windshield and wipers is going to literally blind you with each pass of the wipers.

Now is the time to do a deep clean of your windshield and windows, which includes using either a clay bar and razor blade on the exterior, or a combination of other techniques. It’s not a fun job but it’s crucial for our wet winters.

Yes absolutely do all of the surfaces if you can. RainX is good stuff.

If you have an polisher, polish the glass for an extra clean surface for the RainX to bond to. Clean your wipers with 20 passes of a soapy rag each, or better yet replace them as the final step of the job. And don’t forget to clean the inside of the windshield, as off gassing leaves a film on the interior.

I'm a regular Aquapel user.  Lasts a lot longer than RainX but application is tricky.  Unfortunately though I have a hard time with wipers on a treated windshield.  They'll either leave a quickly fading streak behind making night driving trickier or they'll chatter and skip.  I've used good quality Valeo wipers, PIAA silicone wipers, and others.  Aquapel is great at highway speeds and I barely have to use the wipers but it's frustrating at lower speeds.  I still prefer the water beading vs splattering at night though.


As most of you know our very good friend, devoted umpire and strong family man Nick Grove was on his way home after spending his evening doing what he loves, umpiring at Goudy, in an instant his entire world would be shook. Nick was involved in a very traumatic accident that resulted in him having to be extracted from his completely written off, flipped on its side truck. He sustained injuries to his sternum, 5 broken ribs, bruises as well as trauma. He’s going to need to relax and focus on his health and his beautiful family but anyone who knows Nick knows he doesn’t do rest that well he’ll stress about money, bills etc.
Ive started this with the support of his wife Heather to allow Nick the time to rest and heal before attempting to work again and not stress about how to pay the bills or feed his family. ICBC will eventually be there to help financially but these things take time and bills don’t have time they keep coming.

Get your windshields properly cleaned, people. This is a must-do every fall.

This is the Tyee/Esquimalt road intersection. Several months ago the right hand turn slip lane was removed and the road/lanes reconfigured.

Prior to the reconfiguration we rarely heard car horns, but now they happen 5-10 times a day.

Yesterday when I was actually watching I saw several people go straight in the right lane. The problem is even more frequent since not all violations result in a honk.

While there are very clear road markings, it seems that there are quite a few drivers relying on the visual cues rather than actually following the road markings.

The intersection is complex and busy enough that it deserves a large overhead sign with arrows, placed back towards the bridge at mid block.

You should take some videos.  The removal of the slip lane was really stupid, but the bike advocates wanted it, so they got it.

As a pedestrian who was almost whacked numerous times while attempting to cross the slip lane, I am very glad it is gone.

Perhaps we could do something to fix the bad drivers.

The left turn lane heading west is also so sketchy there. I just took that turn and vehicles come so close to you as they navigate that curve, meanwhile oncoming traffic is also navigating that curve.

Well that didn't take long to get an example. The driver was stopped at the red light so had plenty of time to check out the intersection, When the light changed they just proceeded straight through the intersection from the turn lane.

Here is another common behaviour of moving into the intersection when there clearly isn't any room available. The light was red at this point so the car farthest in the intersection was there for an entire light sequence.

Often the drivers will then nose into the bike lane so they can commit two infractions at once.

Here is another common behaviour of moving into the intersection when there clearly isn't any room available. The light was red at this point so the car farthest in the intersection was there for an entire light sequence.

Often the drivers will then nose into the bike lane so they can commit two infractions at once. 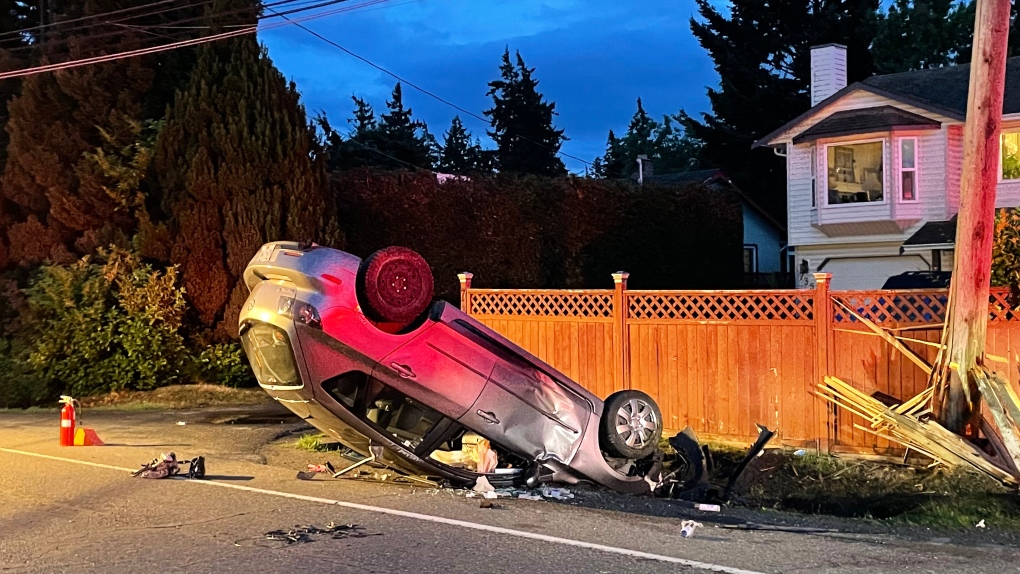 VICTORIA - Mounties are searching for two people after officers responded to a serious rollover crash in Colwood, B.C., only to find the vehicle abandoned.

The West Shore RCMP were called to the scene in the 700-block of Kelly Road shortly after 7 p.m. Monday.

A grey Mazda hatchback was travelling westbound when it crashed into a culvert, flipped into the air and struck a utility pole, coming to rest on its roof.
More: https://vancouverisl...crash-1.5603966

All road users have role in keeping safe

A trial in North Vancouver this past April saw a motorist acquitted of charges around the 2019 death of a cyclist who was killed by the sudden opening of a car door. Knocked to the ground, the cyclist was propelled underneath the wheels of a massive transfer-style dump truck and died instantly.

The acquittal happened because the judge was not satisfied that witnesses were able to clearly identify the driver who allegedly opened his door. The witnesses were also uncertain about the actual vehicle involved in the incident. As there was reasonable doubt about the driver and vehicle involved, the judge did not rule on whether the door opening itself was unsafe. Lawsuits in civil court are still pending.

This tragedy probably led the B.C. government last summer to quadruple the fine for “dooring,” or, more technically, opening a door into traffic when not reasonably safe to do so, to $368 from $81.

Finding blame is not the point here. It was actually the post-trial media coverage that brought this incident to mind. As part of their coverage, TV media showed a few jarring video clips from some other dooring incidents captured by cyclists’ helmet cams. They showed the danger and suddenness of how tragedy can occur when a car door is opened into the path of a cyclist. These videos and the huge rise in the fines might make you believe that car drivers now bear an inordinate amount of blame for this problem. However, they shouldn’t and they don’t.

While these news clips clearly showed cyclists flying off their bikes from bone-crunching door strikes, they glossed over the moments that also showed those cyclists illegally passing the cars whose doors struck them.

Wouldn't the door in question have some pretty big evidence of damage?

A protest has blocked the 800-block of Yates Street. Do we know why that block is the target?