It sounds like libertarians would like annual road testing and a very high threshold for successfully completing it.

It sounds like libertarians would like annual road testing and a very high threshold for successfully completing it.

They would let the market, insurance, courts, and common sense rule.  Rather than a government licensing beaurocracy.

No 16-year-old can afford a Lexus.  That 13-year-old in the article did not own the car he was driving.

If today, literally today, we said anyone that wants to drive can - with no license - how big would the uptick be, in unqualified drivers?  Are you going to lend your cousin your SUV?  If you do, will your insurance company be kind to you if they crash it?  Are homeless people or the mentally impaired or the 10-year-olds going to find cars to drive?

Who’s the owner of the car? It’s not registered to an address, remember? The driver has no license to prove who he is, and where he lives, and where the car is registered. It’s his as far as ownership in the present moment is concerned.

What are we arguing about again?

Libertarians would not require mandatory insurance of course, but they still want strong courts.  And they are happy to let people offer insurance.  Most libertarians own insurance policies.  They - quite rightly - don't think they should ever be mandatory.  Just like home insurance, buy it if you want, or if your lender insists, but otherwise it's completely optional.  But if your leaking furnace fuel tank contaminates your neighbour's land, the court will make you pay up.

The pair was spotted between Mudge Island and Vancouver Island 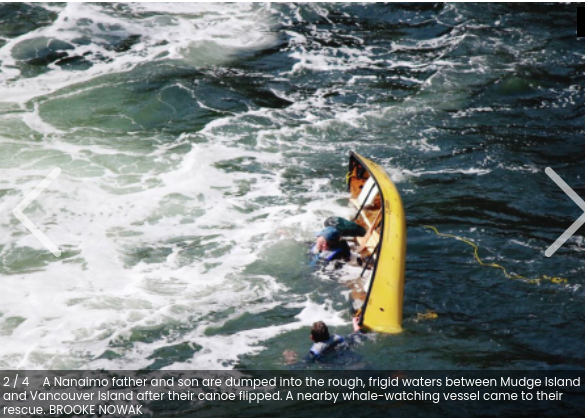 A Nanaimo father and son are safe, thanks to a nearby whale-watching vessel, after their canoe flipped, dumping them into the rough, frigid waters between Mudge Island and Vancouver Island.

The 30-foot vessel Kula, with Vancouver Island Whale Watch, had left Nanaimo at noon Saturday, arriving at Dodd Narrows about 15 minutes later, captain Rodrigo Menezes said. At the time, the currents were “flooding strongly,” reaching velocities around seven knots, according to the boat’s chart plotter.

When he saw two males in a canoe on their way to Mudge Island, Menezes slowed the Kula to wait because “it was clear to me it wouldn’t be an easy crossing.”

When the Kula was about 50 metres from Mudge Island, the canoe suddenly flipped over. Its occupants hung onto the canoe and waved for help, Menezes said.

The first attempt to rescue them from the water was not successful, Menezes said.

When they reached more open waters, Menezes said, he was able to shut down the engines, get closer to the canoe and throw out a life ring. First the father and then the son were pulled onto the Kula. The canoe was attached to the boat. A second vessel with the whale-watching company arrived to provide assistance.

Later, the father called the company office to thank the captain, who reported the incident to the Canadian Coast Guard.

Nanaimo RCMP pull over impaired educator with students in vehicle

Nanaimo RCMP has suspended the license of an educator after she was pulled over and determined to be driving impaired while transporting students in her vehicle.

The incident took place on April 25, shortly after 11 a.m., when a frontline officer with the Nanaimo RCMP observed a vehicle with a suspected suspended driver near Milton Street and Fitzwilliam Street.

The officer conducted a traffic stop with the vehicle and identified a 43-year-old local educator who was escorting four students to an extracurricular event in Nanaimo.

According to a police report, the officer conducted an impaired driving investigation and determined that the woman was beyond the legal limits of alcohol in her blood to drive a motor vehicle.

The driver was issued a 90-day Immediate Roadside Prohibition and her vehicle was impounded.

During the stop, the educator arranged for a new means of transportation for the students and they were able to continue with their day unharmed.

A spokesperson for the Nanaimo-Ladysmith School District confirmed to CHEK News the educator was not employed by the district.*

* - CTV clarified: The Nanaimo-Ladysmith School District says the students and educator are not part of the local public school district. 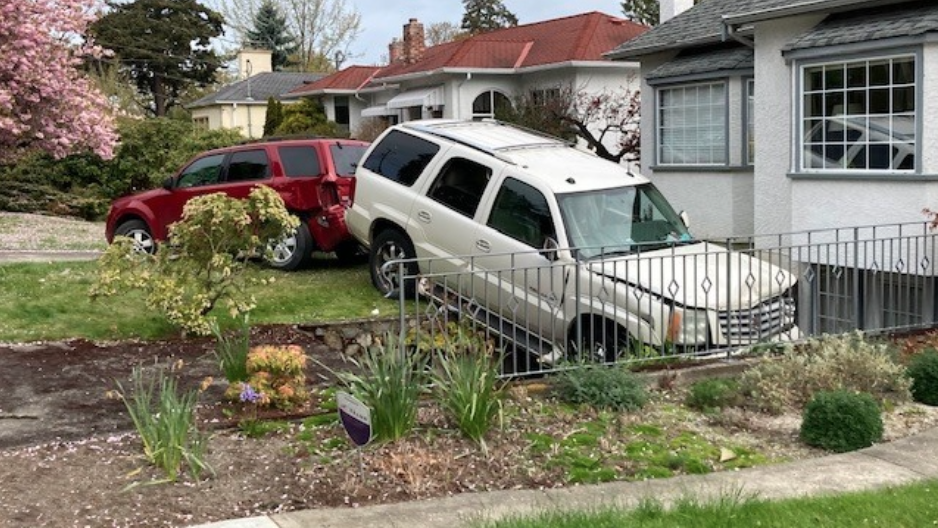 Firefighters say a man was taken to hospital on Tuesday morning following a crash in Victoria.

Acting battalion Chief John Mokosak says a man was travelling south on Fairfield Road in a white SUV when he suffered a medical emergency and drove off the road.

The man ended up crashing into a red vehicle that was parked in a driveway and "partially" into the bottom suite of a home near the intersection of Fairfield Road and Kipling Street.

These white Escalades are terrorizing the neighborhood.

Let's see how the judge interprets the trust when they all play with Plastic Bag Fireballs at Beacon Hill Park...

Near Kipling it could be considered south.

A single-vehicle collision in Saanich over the weekend has resulted in the death of a 30-year-old driver and police say they are investigating further to see what may have caused the incident.

According to Saanich Police, the incident took place on May 8 at around 6:35 p.m along Cordova Bay Road, just west of Ash Road.

The driver, a 30-year-old man, was the only occupant of the grey four-door Mitsubishi Lancer. 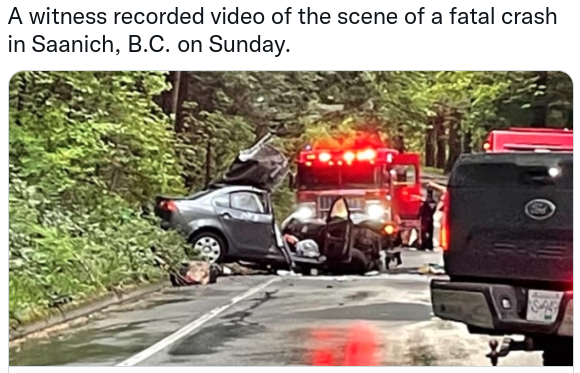 Ya straight into a tree. Presumably the jaws of life opened it up a bit like a can there.

Victoria police say five people were injured when a vehicle crashed into a building near downtown Victoria Tuesday afternoon.

The crash occurred at the Red Cross building near the intersection of Quadra Street at Fairfield Road.
More information is expected to be released later Tuesday. 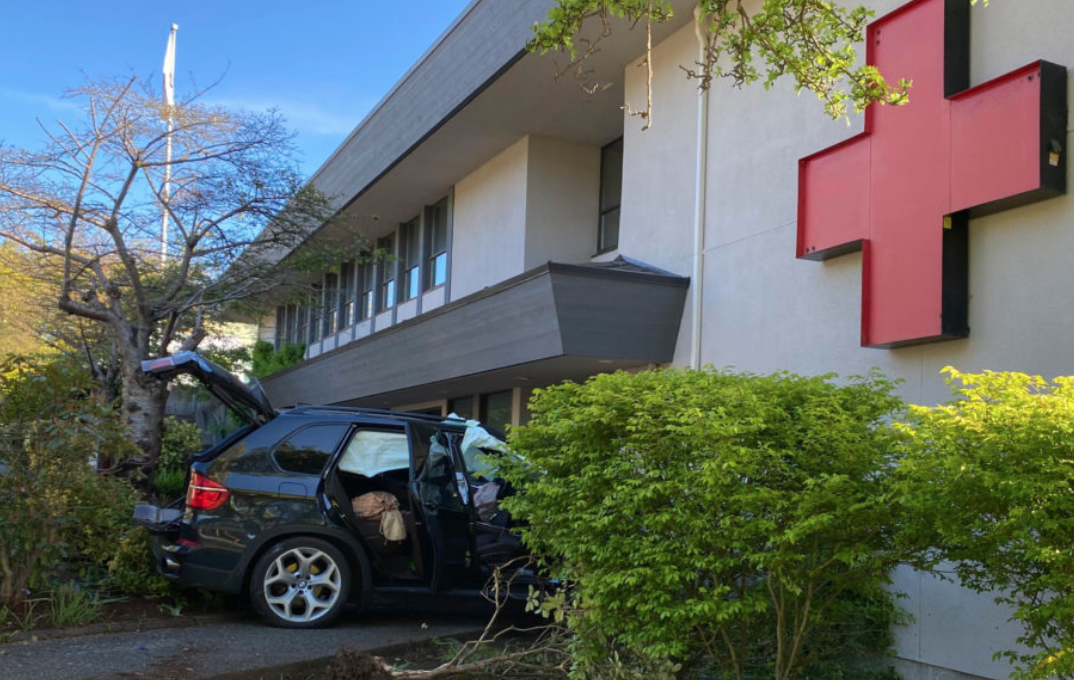 Four people were transported to hospital with serious but non-life-threatening injuries yesterday after a collision involving several vehicles, a pedestrian, and a building in Victoria.

At approximately 4:30 p.m. yesterday, Patrol officers responded to the intersection of Quadra Street and Fairfield Road for a report that a vehicle had driven into a building. The vehicle was travelling southbound on Quadra Street when it collided with two vehicles in front of it, and then struck a pedestrian before colliding with a nearby building. The driver and two passengers of the vehicle that struck the building, along with the pedestrian, were all transported to hospital with serious but non-life-threatening injuries.

VicPD’s collision analyst responded to the scene, and traffic remained closed in the area for several hours. At this time, it is believed that the driver of the vehicle that initiated the collision suffered a medical incident.

Is it worth it to leave an accident scene?

I feel for the woman who got hit in the crosswalk in the snow and the woman, also in a crosswalk, who looked like a human pinball as she tried to scramble back to the curb.

We are always shocked at how the drivers speed away. One case in Vancouver last week even showed the driver backing up to get around the limp body of the person they just hit.

Why do people hit and run, how can they just drive away? The fact is, it’s cheaper and easier. Right now “failing to remain at the scene of an accident” is worth it. The fine is small, especially compared to the cost of an impaired driving conviction other infraction.

Why don’t we make it expensive? How about a mandatory five-year driving suspension for failing to stay when you’ve hit someone? Then triple the fine.

Instead of $1,000, make it $3,000. In addition, any damage and rehab costs incurred by ICBC should automatically be charged back to the hit-and-run offender regardless of their insurance coverage.

These aren’t draconian steps when you compare them with the policing cost of tracking down the offenders and the pain and suffering of victims and their families.

As long as it’s worth it to leave the scene of the accident, we’ll keep seeing these deeply disturbing stories. Let’s put an end to it.

In tandem earlier today, the Malahat was down to single lane alternating traffic in the Bamberton area, as was Highway 14 near Kangaroo.