A 400-600 lb motorcycle hitting another vehicle at 300 km an hour will very likely cause a catastrophic accident.  On a busy highway the results may well lead to many injuries or deaths.  So perhaps your idea isn't such a great one.....

Calgary isn’t sending us their best.

- Pretty big error for SPD...having to "walk back" a traffic death announcement...
Correction: Police initially reported that one person succumbed to their injuries in hospital following the crash. That person is in fact still alive in serious condition, according to updated information provided by Saanich Police. We regret the error.
One person in critical condition, five others injured in Saanich crash

Six people were injured, one seriously, in a crash that shut down part of Gorge Road West in Saanich Friday night.

Police were called to a report of a two-vehicle collision at 8:30 p.m. in the 100-block of Gorge Road West, north of Harriet Road.
A car had turned right from Harriet Road onto Gorge Road West and was heading westbound when the driver apparently lost control and veered into the path of an oncoming vehicle, Saanich Police told CHEK News.

A passenger in the car suffered life-threatening injuries and was rushed to hospital, where they remained Saturday in critical condition. 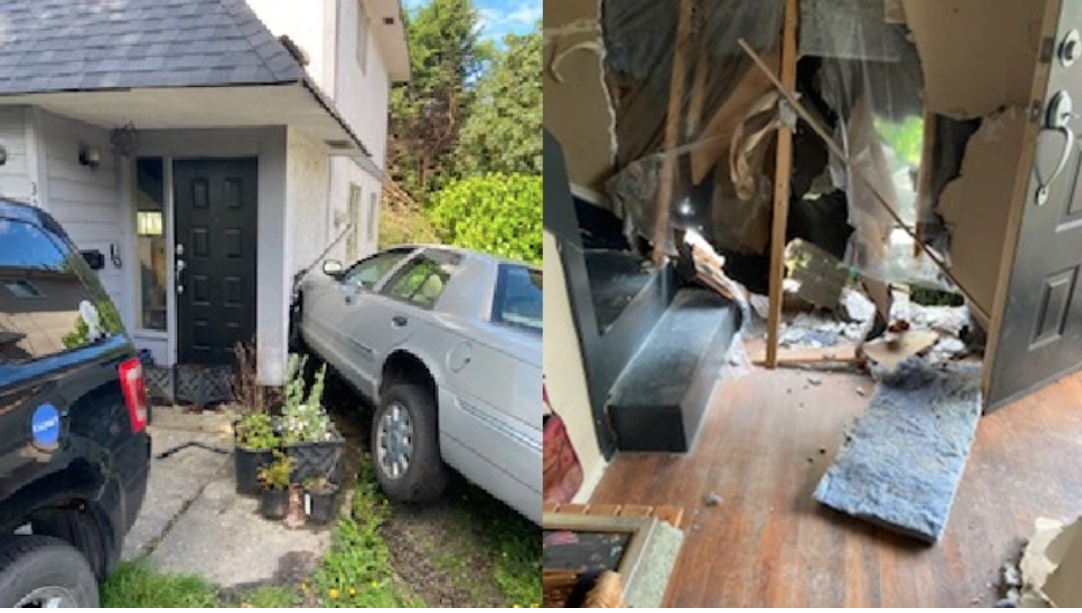 There were no reports of serious injuries after a vehicle slammed into a Saanich home Saturday morning.

It happened at a residence on Shelbourne Street, near Knight Avenue.

The home’s owner told CHEK News she heard screeching tires at around 10:30 a.m. When she went to check out the sound, she said she saw a car heading toward her home and jumped out of the way.

Witnesses later told the homeowner a driver and cut off another driver, who then lost control and plowed into the home.

Unless Saanich police are wrong again.

I hope these motorcyclists have registered as organ donors.

If you guys are reading this, here is the link

These guys are dead immediately so wouldn't be eligible for organ donation, you have to die in the hospital.

Government wants to send case to tribunal, cap compensation at $5,500 per injury. 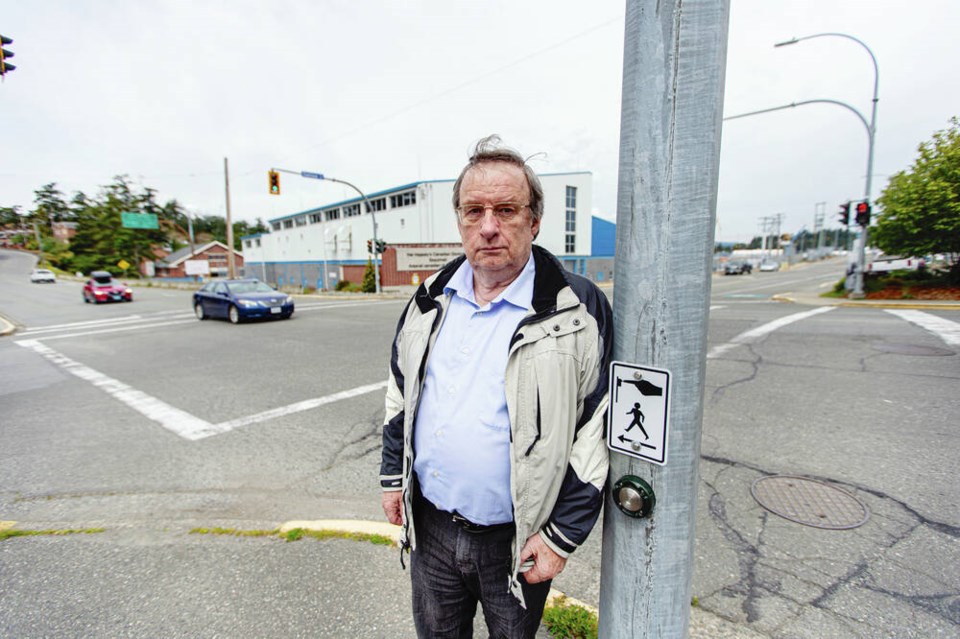 Former DND employee Daniel Barcelo where he was hit by a truck in the crosswalk at Esquimalt and Canteen Roads in 2019.

On Christmas Eve 2019, Daniel Barcelo was walking to work at CFB Esquimalt when he was hit in a crosswalk by a truck driven by a Department of National Defence employee.

The light at the intersection of Esquimalt and Canteen roads was green for Barcelo. The crosswalk signal was working. And Barcelo was well into the crosswalk walk when he was hit by the DND truck and ended up in the hospital for 18 days.

Barcelo was diagnosed with a significant traumatic brain injury, a fractured skull, vertigo and chronic headaches. Now 70, he has never been well enough to return to work at the base because of ongoing vertigo related to the collision.

The former marine industrial labourer has launched a civil suit against the DND employee who was driving the truck and against the Attorney General of Canada, seeking compensation for his injuries and lost employment. DND vehicles are insured by the federal government and not by ICBC.

However, lawyers for the government have applied to stay the trial and send the case to the Civil Resolution Tribunal. They are alleging Barcelo’s injuries are minor, which means the compensation is capped at $5,500 per injury.

Victoria lawyer Richard Neary, who is representing Barcelo, will oppose the government’s application at a hearing Friday morning. Barcelo’s injuries are not minor and experts on both sides agree he has a traumatic brain injury, said Neary.

“That accident has ruined my life,” said Barcelo, who drove to the base Wednesday and met with former co-workers who have offered him support. “The guy that I was when I got up on Dec. 24, 2019, no longer exists. I can no longer do the things I like to do. I get dizzy. I get nauseous. I lose my balance. The worst thing is the dizziness. My alarm goes off and I roll over in the bed. Well, the whole room starts to spin.”

I don't know.  The group seemed to be having a conference on the crosswalk.  And I might leave too rather than being approached by a group of drunks at 3am.

A hit and run involving a pedestrian struck in a Victoria crosswalk last weekend has police looking for information on the driver.

Video released by the Victoria Police Department on Thursday shows a car slowly turning toward Courtney Street, from Douglas Street, just before 3 a.m. on Saturday (June 11).

The car slows as a group of people are in the crosswalk before it continues forward, hitting one person.

West Shore RCMP responded to a single vehicle collision which sadly claimed the life of the 59-year-old sole occupant.

On June 19, 2022, at approximately 7:15 a.m., the West Shore RCMP responded to a single vehicle collision in the area of Goldstream Avenue and Kristina Place in Langford. Initial observations on scene indicated that a driver of a car collided with a parked industrial vehicle.

BC Emergency Health Services and Langford Fire Rescue rendered first aid on scene, however the driver succumbed to his injuries.

This tragic incident is still under investigation by the BC Coroners Service and RCMP Collision Analyst , says Constable Meghan Groulx, spokesperson for the West Shore RCMP. No further information is available at this time as the investigation continues and a name will not be released.

Saanich Police’s Traffic Safety Unit is investigating after a 17-year-old was struck in a crosswalk on Burnside Rd West last night.

On Thursday, June 23, 2022, just before 9 p.m. the pedestrian was crossing Burnside Rd West at Wascana St when he was struck by a vehicle travelling westbound on Burnside Rd West. The driver remained on scene and is cooperating with police, who have ruled out impairment as a factor in the crash. The pedestrian was taken to the hospital with serious injuries and remains in critical condition.

Investigators are seeking anyone with dashcam footage to come forward to police, including any witnesses that may have seen the events leading up to the crash but have yet to speak to an officer.

The vehicle involved is a silver 2006 Pontiac Montana van. 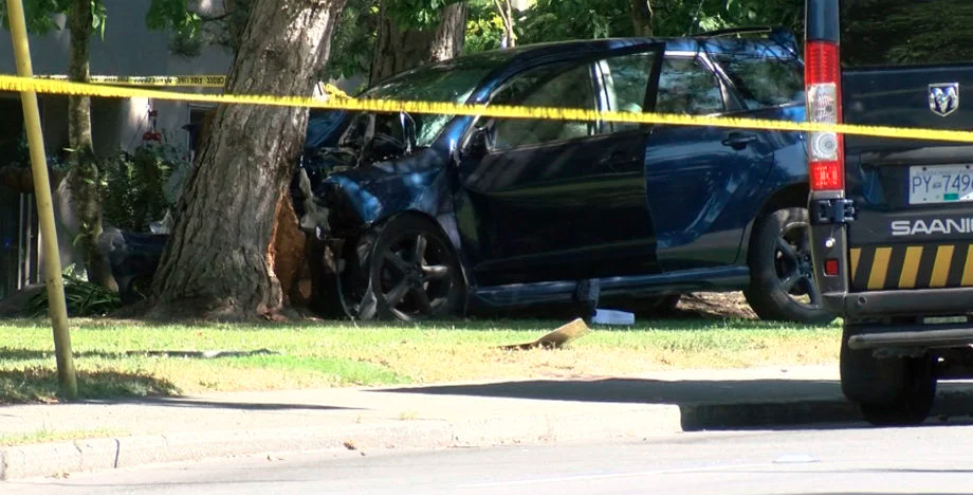 Two occupants of a vehicle were taken to hospital after crashing into a tree at the corner of Quadra Street and Union Road.

Saanich Police say the vehicle crashed into a tree around 2:45 p.m.

Barb Montgomery, who lives in the apartment on the corner of Quadra and Union, says she heard the crash when she was sitting in her apartment.

“I heard the screech of brakes, and then the bang, it was huge,” Montgomery said. “By the time I got out here, there were all kinds of people around lots of witnesses, I guess, and they were helping the two young fellows get out of the car, and they weren’t mobile. They had to lay them down on the ground.”
More: https://www.cheknews...police-1056589/

The cyclist escaped with non-life-threatening injuries

More like “cyclist rides right into large truck”. Kind of hard to not see that truck. But the cyclist somehow managed.

No big fan of cyclists in general, but the light for both the white car, and the semi that followed it was very clearly red.

So the collision is 100% the semi drivers fault, with zero fault on the cyclist.

That they cyclist had a green light is made obvious by the second cyclist, as well as the pedestrian all starting to move across the intersection at exactly the same time.

I’m not saying the cyclist was in the wrong. But why did he ride right into the truck? Where is his awareness for his own personal safety?

That kind of 5-ton straight truck makes verrrrry wide turns by design (especially in the super tight Victoria downtown core circa 2022)  ... I'll change up your observation just a bit, and say that the truck, in fact ... drove right into the cyclist, it's just that the way his truck was turning so sharply (and quickly) as well as running a very RED light - caused the cyclist to impact the rear tire rather than the grill of the truck.

By the way, the problem of more accidents on Wharf St going viral has been solved in the most Victoria way possible. The webcam has been deactivated and all videos on the channel have been deleted. The intersection is now as safe as Centennial Square (no CCTV allowed)  #yyj

And the Lower Causeway.

Just after 12 p.m. today, VicPD Traffic and Patrol officers responded to calls that a group of vehicles was in the BC Legislature area as part of a protest gathering. The group of approximately 20 vehicles was engaged in a “slow-roll” blockade and were using vehicle horns, modified air horns, and amplified speakers mounted to their vehicles all of which had a significant and unlawful impact on residents and businesses in James Bay and the B.C. Legislature area.

Supported by Patrol officers, a VicPD Traffic officer on a motorcycle engaged the operator of each vehicle in the group and issued a warning and reminder about safe, peaceful and lawful protest. After each vehicle operator was spoken to, the honking and reports of disturbance in the BC Legislature area stopped. Once the vehicles associated with the protest left the area, officers returned to their regular duties.

A short time later, the same VicPD Traffic officer was in the 2500-block of Blanshard Street for an unrelated matter when he observed several of the same vehicles circling the block, honking and using amplified speakers to target a nearby business. Having already engaged in de-escalation and given warnings, the VicPD Traffic officer began pulling vehicles over and issuing tickets under the Motor Vehicle Act. In short order, the unlawful activity ceased.

Two drivers were issued significant tickets under the Motor Vehicle Act which will incur both fines and penalty points.

VicPD supports safe, peaceful and lawful protest. Dangerous and/or unsafe activity will continue to be met with de-escalation and enforcement. 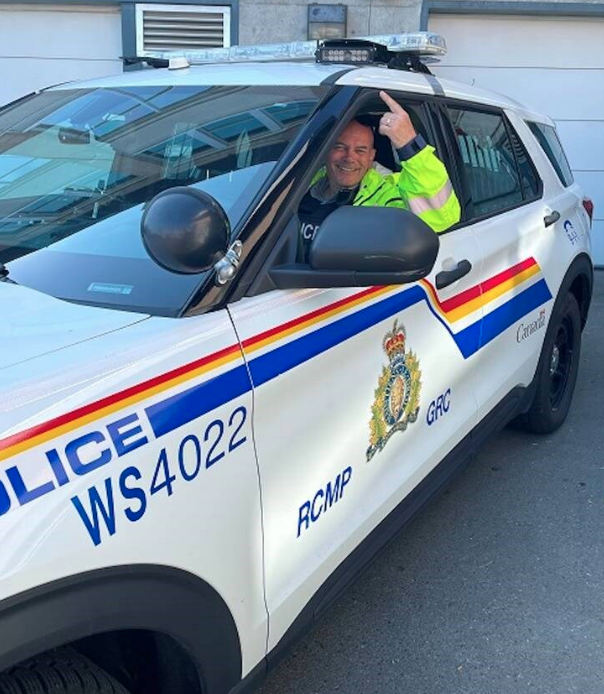 A West Shore RCMP traffic officer points to the camera of the automatic licence-plate recognition system mounted atop his patrol vehicle.

West Shore RCMP is cracking down on improperly displayed or missing licence plates, which can net drivers fines of $109 to $230.

The detachment said in just over an hour last week, it encountered 40 vehicles with missing, modified or obscured plates.

The RCMP has adopted an automatic licence-plate recognition system province-wide, featuring a camera mounted atop a police vehicle that continuously reads licence plates on the road.

When it receives a hit, the system provides relevant vehicle and driver information to the officer. It can alert the officer of stolen or uninsured vehicles, unlicensed drivers and people with outstanding B.C. and Canada-wide warrants.

But in order for the technology to be effective, licence plates need to be displayed in accordance with B.C. Motor Vehicle Act regulations.

“The most common we see are luxury vehicles without a front plate. Unfortunately, a nice vehicle is not an excuse for not having a front plate and will likely result in being pulled over.”

The Lt Gov two vehicles do not have a proper front plate, rather they just have a gold crown. Is this legal?