794 replies to this topic

Seems too low density, does not take into account the current state of the government use of the buildings. I would like to see something bigger, with more density and in that location perhaps with some tourism focus.

Most of a large city block near the legislature will be redeveloped into government office buildings, housing, retail and commercial space, and a network of open spaces under a deal between two developers and the province.

Victoria’s Jawl Development Corp. and Vancouver’s Concert Properties are teaming up to buy the land and build the mixed-use project on about six acres.
A sales agreement has been signed. Details will be released when the sale closes in March, a provincial official said.

Construction costs are not yet available, but plans include two office buildings for B.C. government workers that will be built to high energy-efficient and environmental standards.

Robert Jawl, of Jawl Development, said his firm and Concert Properties are natural partners because of “strong shared priorities between the two companies with respect to high-quality and community-responsive developments and certainly a long-term orientation to the projects that we take on.” The project will be built in phases, generally from west to east, he said.

B.C. earlier submitted applications to the City of Victoria for subdivision and rezoning. Jawl said a further application is anticipated, with the hope of submitting it this summer. Discussions with the James Bay community, where the land is located, and the city will be held.

If all goes smoothly, office construction could start in spring 2015.

"If all goes smoothly, office construction could start in spring 2015."

That is great news. I can't think of developers in which I would have more confidence to build something good.

get rid of the parking lot and let the civil servant take the bus (except the deputy ministers of course).

^ FTR Most civil servants pay market rate for parking at anyone of the lots downtown. Just in case the insinuation was that there was some sort of free ride.

These five heritage houses will be moved to a smaller lot on Kingston St.

506 Government Street is a heritage house that is next to the South Block parcel.

514 Government Street is another heritage house next to the Queen's Printers.

This Quonset hut is being used for storage by the Queen's Printers, and is on the South Block parcel. Is it considered to be heritage?

...[The] Quonset hut is being used for storage by the Queen's Printers, and is on the South Block parcel. Is it considered to be heritage?

Heaven forbid! That's one ugly beast, and not even the least bit special in terms of architecture. I look forward to seeing it, as well as the rest of the post-WWII dreck on the South Block properties, being torn down ASAP.

About six acres of government-owned land behind the B.C. legislature will be redeveloped under an agreement with two developers and the province.

Victoria-based Jawl Development Corp. and Vancouver-based Concert Properties have put in a successful bid to purchase the South Block, located between Government and Menzies streets and Superior and Michigan streets in James Bay.

Financial details will be released when the deal is finalized in March, said Jamie Edwardson, communications director with the Ministry of Finance.

"We received a number of high-quality submissions from well-known developers and feel we're getting good value for the property," Edwardson said.

The current plan includes two office buildings on the site, and the province has promised to lease 180,000 square feet of office space upon completion. The development will be guided by the Victoria Accord, an agreement between the City of Victoria and the province that dates back to 1993 and ensures intergovernmental collaboration on provincial real estate deals.

"Right now, the block is a bit of an eyesore but the new development will rejuvenate the area, opening up new space for government, as well as private sector opportunities," de Jong said. "This is a prime example of how we can maximize the benefits of an under-utilized property to help spur economic activity and benefit a community.”

Marg Gardiner, James Bay Neighbourhood Association president, said local residents have been waiting 20 years for the build-out of the "parking lots" south of the legislature.

I have real concerns as to the grief the James Bay NIMBYs are going to cause the Capital Park project. I await the first proposal of turning the whole thing into a community garden/deer sanctuary.

Okay, I'll take the opposite position and say this one will go so smoothly that it will blow our collective minds. The office buildings will be Selkirk-esque in scale and design and nobody will have any issues with them; the residential buildings will be like Chelsea and/or Arbutus Walk and nobody will have any issues with them; the extension of the commercial village on the east side of Menzies will seem so organic and genuine that people will take it for granted that it had always been there. Oh, and the relocated & spruced up heritage houses will look so fantastic clustered together on the other block, they'll end up being a photo-op for tourists unto themselves.

But aastra, there will be so many towers to approve...

8 stories is a tower? I think that's the maximum height mentioned in the Victoria Accord.

The Times Colonist seems to think 6-storeys is a tower, so 8 is getting up there...

I think James Bay will welcome this. They've been waiting for those bleak parking lots and rusting quonset huts to be replaced for decades now. Throw them a bone or two and they'll be happy.

But then again for decades they were staring at a bleak surface parking lot just up the street from Capital Park and across from the City's tallest building ...and put up a fight that lasted six years for a building that's barely 1/3 the height of what's across the street. 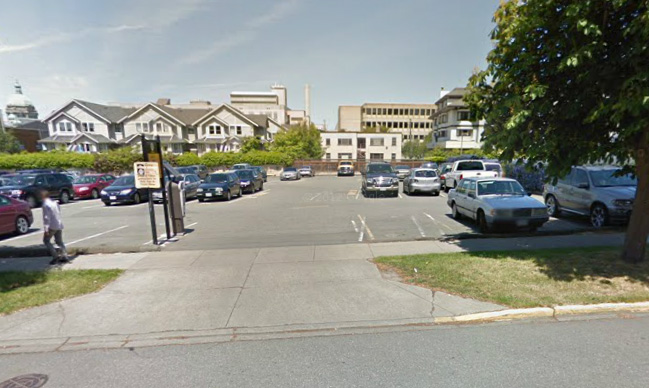 I don't for a second believe any development on this site will go unchallenged by the James Bay NIMBYs.

I think this one has a great chance. The initial reaction from the head of the James Bay NIMBYs was positive that the old eyesores are going. Given the Jawl's approach, my guess is there will be little opposition. But then again, this is Victoria.