Yeah, I see orange, grey and cyan (Winnipeg) as other colours. Perhaps cyan is military.

HMCS Winnipeg (NATO Warship 338) is in the Med about 300km north of Algeria.

HMCS Winnipeg is the first HMC Ship to deploy an Enhanced Naval Boarding Party (ENBP) on an operational mission. The ENBP team is better trained and equipped to provide HMC Ships with enhanced agility, flexibility, and tactical expertise to confront and deter a variety of threats in high-risk operational environments.

A Chilean supply vessel has arrived at CFB Esquimalt. She'll be training RCN crews over 40 days in preparation for the arrival of Canada's Queenston-class ships. 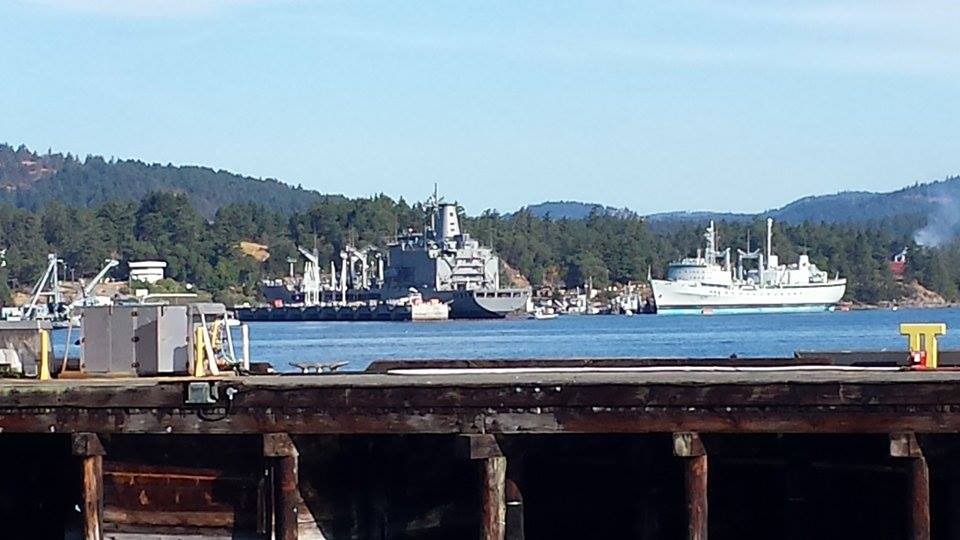 Canadian military procurement is like a terrible nightmare. Forget about construction - has the RCN even signed a contract for ship procurement?

Canadian military procurement is like a terrible nightmare. Forget about construction - has the RCN even signed a contract for ship procurement?

And just to reiterate your comment above Jonny as well as my own earlier commentary, we now have this latest update from the National Post re: the state of the RCN. What an unholy cluster***k. The real shame of it is that none of these issues are a surprise or were unforeseen - decades ago in some instances.

This sits squarely on both the Liberals and the Tories as over the last two decades+ both parties have proven utterly incompetent re: the military procurement game - http://news.national...ift-and-sinking.

The real concern of course is that no resolutions are even remotely on the horizon especially given all things 'military' in this country in terms of prioritization rank somewhere between saving the dodo and securing federal funding to study the sex life of Napoleon and Josephine. Brutal.

In addition to the great naval schmozzle noted above I am hearing a lot of whispers - none of them very encouraging - specifically re: the west coast piece of the National Shipbuilding Program and that it is potentially in real trouble.

This is the non-naval (thank God, since I don't think the RCN can take much more bad news) portion of the NSP.

Sounding more and more like we will ultimately wind up with less and less in terms of actual hull numbers that will hit the water, and potentially when they do it may be much later than originally envisioned. Other nations can build entire naval and commercial fleets consisting of upwards of hundred of vessels; Canada stumbles about like a drunk the morning after the night before over a paltry fifteen ships, which by global standards - even by the modest standards of a middle power like Canada - is nothing. And as usual, as with the F-35 interceptor debacle, the primary culprit lies mainly with the intransigence of DND bureaucrats. As stated before by more than one VV poster the military procurement process in this country is utterly broken.

It will be interesting to see if whoever wins the election makes fixing it any sort of a priority.

Personally I would not want to take any bets since we know the Greens want to turn the Canadian Military essentially into little more than armed Boy Scouts running around singing "kumbaya"; the NDP is, well...the NDP. Generally they go together with the military like oil and vinegar. I've no doubt they would address the closing of Veterans Affairs offices and provide more resources for forces' personnel suffering from PTSD for example, but I am less convinced they would move quickly if at all to address gaps in - gasp - "weapons of war". Trudeau Junior says a Liberal government would focus funding on rebuilding the Navy specifically - but again the emphasis needs to be a complete review and overhaul of the procurement process, front to back, top to bottom. Personally I am most disappointed in the Tories, whom one would think would be most sympathetic to the Forces from a philosophic standpoint if nothing else. Under Harper and for that matter under Mulroney in the 80's, materially little was/or is being accomplished in terms of re-equipping the forces and of course nothing has changed in the procurement game which is where the rot lies.

If you've been hearing and seeing black choppers over the skies of Victoria, by day or night, here's a video depicting them as part of a CFB Esquimalt military exercise. They appear to be American but that has not been confirmed.

If you've been hearing and seeing black choppers over the skies of Victoria, by day or night, here's a video depicting them as part of a CFB Esquimalt military exercise. They appear to be American but that has not been confirmed.

They are Canadian Griffon helicopters.

The Algonquin and Protecteur are soon on their way to the scrap yard.

An unfortunate but timely ending for two sparing partners after the two ships were involved in a collision en route to Hawaii in 2013.

HMCS Winnipeg will arrive in Victoria around February 22 after an 8 month deployment.

Just discovered this PPT presentation on some of the infrastructure projects at Esquimalt and Halifax. 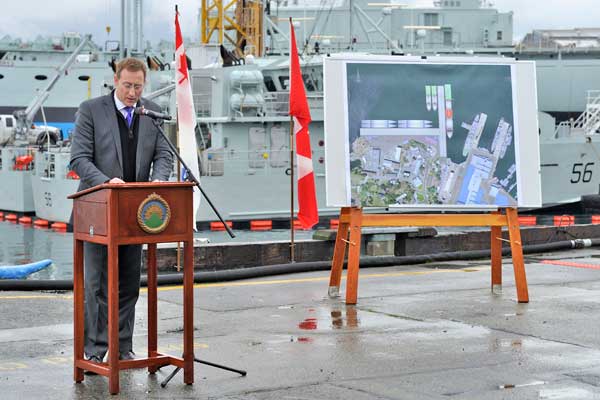 Something like that. I'll have to check the DND Intranet website to make sure. But that money also included the support tunnel that was built from the main gate to the jetties.

HMCS Winnipeg will arrive in Victoria around February 22 after an 8 month deployment.

Hopefully with all the crew they started with.

The Canadian navy says two members of an Esquimalt-based warship have been charged with drug offences by Japanese police.

The charges follow a port visit to Tokyo by HMCS Winnipeg, a Halifax-class frigate with a crew of about 250 personnel.

HMCS Winnipeg is based at Canadian Forces Base Esquimalt.

The navy says in a news release that police detained two military members and a civilian employee on Monday for the alleged use of a controlled substance. - See more at: http://www.timescolo...h.0pleopdB.dpuf

Hopefully with all the crew they started with.

Sad. At one point in the not too distant past being a member of our armed forces was something to be respected for and proud of.

Sad. At one point in the not too distant past being a member of our armed forces was something to be respected for and proud of.

I'm proud of our armed forces and it's too bad they don't have better equipment to work with.

There are always going to be a few that spoil the reputation for the majority.

I'm proud of our armed forces and it's too bad they don't have better equipment to work with.

There are always going to be a few that spoil the reputation for the majority.

If this was the only recent incident I would agree with you. In the recent past we have had now dozens of complaints of sexual assaults by service members, shoplifting charges, a sexual assault in a foreign port resulting in the return of an entire ship's crew and a vessel catching fire and being written off without the Navy apparently having any idea what happened.

Not at all to minimize or deflect your points spanky but *all* military orgs - all of them - have similar issues covering a spate of transgressions. Nothing new in your list unfortunately.

And "dozens" of examples in an org of 100,000+ members is probably statistically not too far off any career category; how many like or worse issues have been reported among Catholic priests, teachers, police, Big Business, unions, government? Don't have the stats and admittedly not inclined to do the research but I would suggest among any career path there will always be "x" % of 'issues' as cited above by you......

In the military realm and for truly diabolical and draconian transgressions of accepted military law and code, not to mention good old human rights, I suggest in particular you read up on Russian Army hazing practices for new recruits. Try not to vomit.

Then there was the episode with a certain major Western navy (not ours) on maneuvers in the Mediterranean many years ago in the 80's - when being homosexual was not a path to higher rank, or any rank - where one unfortunate rating decided to come clean to his immediate superior about being gay. Wrong move. Very wrong move. He was shortly thereafter "accidentally" over-boarded and made to tread water in the middle of that sea while the ship leisurely cruised around him for about 20 minutes before retrieving him. The message was simple and direct: think long and very hard about your future. Because its not in this navy....