Isn't this just a marketing tactic?

Sales of Ford and GM ev trucks are rising, so Tesla has to create an aura of mystique to keep some of those buyers from putting down deposits or committing to the competition. The unknown is now going to play with people, and the longer they draw this out the bigger the free marketing and the sense of mystique will be.

It's kind of a smart move.

maybe they want to dump the lowest price one. it was the least popular anyway.

Ford and GM have not sold a single electric truck either, not sure their sales are rising.

It's all reservations at this stage, for all of these vehicles. True, sales is the wrong term.

Ford sales open later this month. Presumably then you must substantially increase your deposit.

Sorry, Ontario, but your government's mishandling of energy has just collapsed any hope of securing manufacturing jobs for electric vehicles.

Ford is moving its battery and EV production to Tennessee, thanks to cheap energy.

FRANKFURT (Reuters) - Tesla boss Elon Musk has addressed 200 Volkswagen executives via a video call after an invitation from the German carmaker’s CEO Herbert Diess, who wants to galvanise VW’s top brass for a faster pivot to electric vehicles.

The comments on Thursday by Musk to a VW managers gathering in Alpbach, Austria, confirmed by Diess via Twitter here on Saturday after a report in Handelsblatt daily, included praise of VW for being an "icon" and Tesla's greatest challenger, Handelsblatt said.

The paper said that when asked by Diess why Tesla was more nimble than its rivals, Musk said it came down to his management style and that he is an engineer, first of all, and has an eye for supply chains, logistics and production.

In a post on Linkedin, Diess added that he had brought in Musk as a “surprise guest” to drive home the point that VW needs faster decisions and less bureaucracy for what he called the biggest transformation in VW’s history.

Tesla reported third-quarter earnings after the bell Wednesday, and it’s a beat on both the top and bottom lines.

The company’s stock dropped less than a point after hours on the results. Here are the results.

The company reported $1.62 billion in (GAAP) net income for the quarter, the second time it has surpassed $1 billion. In the year-ago quarter, net income was $331 million. Can you parse out the vehicle related earnings vs credit sale earnings? Are they getting closer to profitability without those credits?

Can you parse out the vehicle related earnings vs credit sale earnings? Are they getting closer to profitability without those credits?

they already turned that corner last quarter.  try to keep up.

Automotive gross margins, derived from Tesla's core business of selling electric vehicles, also expanded to reach 28.8% in the third quarter from 25.8% in the second. This metric strips out positive impacts from sales of regulatory credits by the electric vehicle-maker to other automakers. These high-margin regulatory credit sales accounted for $279 million in the third quarter, down from $397 million in the same period last year.

Ok, let me put this another way. Are they profitable now without those credits?

Ok, let me put this another way. Are they profitable now without those credits?

yes, they are profitable without those credits.

and those credits are a tiny portion of their revenue too.

Tesla has been increasing prices in the last month so profits should improve going forward, demand is insane. A friend just ordered a Model S with a May delivery date. I think it is time for the government to cut the consumer rebates on EVs. 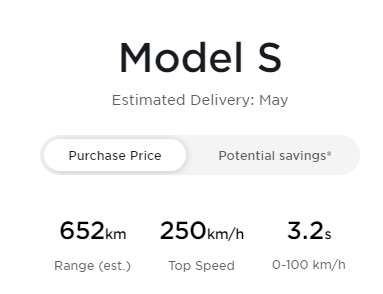 I think it is time for the government to cut the consumer rebates on EVs.

Rebates and grants should be centered around installing EV charging equipment, not on the purchase of luxury cars.

Rebates and grants should be centered around installing EV charging equipment, not on the purchase of luxury cars.

Agreed, at this point rebates for the cars are just a waste as the demand is there without the rebates.

$1.6 billion was the profit so take away credits they are at about $1.3 billion.

the demand is so high that they are likely in no hurry to bring in the Model 2 ($25,000 sedan) at least in North America and Europe.

Despite the absence of confirmation, Tesla drivers of Greater Victoria are charged up over rumours of the Island’s first full-fledged sales and service centre in Langford preceded by a temporary service centre in Victoria.

According to Twitter user @MarcoPRTesla, a contributor to Drive Tesla Canada news source and Supercharge Info EV charger database, the development-friendly West Shore community will see a Tesla sales and service centre at 2371 Gate City Blvd. Without an Island sales and service centre, Tesla owners have to make a trip to Vancouver to make repairs impossible at a traditional auto shop.

A post from Tesla owner David L. to the Facebook group “Tesla Owners Club Vancouver Island” on Oct. 18 suggested the possibility of a temporary service centre in Victoria. “This afternoon I was told by a very reputable source that Tesla will soon be opening a temporary service location in the Victoria area,” David said. “The location is under wraps but there will be an announcement in the next week or two. This is a short-term solution until the Langford service and sales location is built and opens mid-2022.”

My contacts say there is no basis for these rumours, but who knows.

Tesla shares were up more than 4% premarket Monday, following news that Hertz is ordering 100,000 vehicles to build out an elective vehicle rental fleet by the end of 2022.

News of the deal briefly brought Tesla's stock to more than $949 pre-market, a new record-high, just one trading day after shares hit $900.