Too many people today act as if no one can honestly disagree with them. If you have a difference of opinion with them, you are considered to be not merely in error but in sin. You are a racist, a homophobe or whatever the villain of the day happens to be.

Sad thing is its true

There's nothing more offensive for a leftist than someone who disagrees with them. There's no room for debate.

I am Scottish and I am tired of my heritage being run down. Was he perfect, of coarse not. But if that is our standard than we better remove all reference to first nations since they were a slave owning culture particularly here on the west coast. .

And if we want to tear down things that were built with slave labour we could start with the White House.

And if we want to tear down things that were built with slave labour we could start with the White House.

How about the pyramids in Egypt?

Funny how they never talk about the West Coast FN Slavers

Funny how they never talk about the West Coast FN Slavers

I think that to their credit, most FN have been avoiding the slavery discussion period. Other groups are drawing them in as part of their own agendas.

If many FN, such as the Haida, kept slaves, why do they get to decide whether it’s discussed or not?

john a. got whacked again in monteal.

Condemnation for 'mob' that pulled down statue of Sir John A. Macdonald in Montreal

Several dozen police on motorcycles and bicycle accompanied the marchers, but did not intervene when the statue came down

If many FN, such as the Haida, kept slaves, why do they get to decide whether it’s discussed or not?

Just saying they are not jumping on the BLM slavery reparations bandwagon for good reason.

If you or I bring it up we are racist.

^ ^ in fairness john a. was not the only statue beheaded in eastern canada this weekend.

I hate vandalism of any sort because it always becomes one group against another.

My heritage is 99.9% English and Welsh. I'm also getting tired of apologizing for every nasty thing some Brit did. We can't change history.

By the way, did you see the thing about the singer Adele today? She was pictured wearing a Jamaican flag bikini and sporting a hair do. The Jamaicans loved it. Black Americans did not so on twitter all the Jamaicans are telling Black America "you don't speak for us". Very interesting!

When we visited Romania one of our tour guides described it as one of the most heavily invaded history of any country in Europe.

There is no shortage of wrongs dating back centuries. The difference in Canada compared to Europe is that the invasion and decimation was limited to a long running history with indigenous groups.

In Pre-Columbian Mesoamerica the most common forms of slavery were those of prisoners of war and debtors. People unable to pay back a debt could be sentenced to work as a slave to the person owed until the debt was worked off.[citation needed] Slavery was not usually hereditary; children of slaves were born free.

Most victims of human sacrifice were prisoners of war or slaves.[94]

First Nations of Canada routinely captured slaves from neighboring tribes. Slave-owning tribes were Muscogee Creek of Georgia, the Pawnee and Klamath, the Caribs of Dominica, the Tupinambá of Brazil, and some fishing societies, such as the Yurok, that lived along the coast from what is now Alaska to California.[95] The Haida, Nuu-chah-nulth, Tlingit, Coast Tsimshian and some other tribes who lived along the Pacific Northwest Coast were traditionally known as fierce warriors and slave-traders, raiding as far as California and also among neighboring people, particularly the Coast Salish groups. Slavery was hereditary, with new slaves generally being prisoners of war or captured for the purpose of trade and status. Among some Pacific Northwest tribes about a quarter of the population were slaves.[12][96][97]

A few tribes become slavers, capturing large numbers of other indigenous tribes for sale to planters, traders, or other Indians. The Westo, who first sold slaves to the Colony of Virginia, moved south and became the principle ally and slaver of Carolina, until they themselves were exterminated as a tribe and sold into slavery in the West Indies. The "Savannah," a branch of the Shawnee were recruited to fill the role of slavers to the colony.[98] The Comanche, Chiricahua Apache, and Ute engaged in slaving in the American southwest, and Mexico, sometimes taking and selling Mexicans as slaves.

The extreme left tears down the statue, Trudeau's response is that the extreme right is trying to divide society

The extreme left tears down the statue, Trudeau's response is that the extreme right is trying to divide society

Seems about right from a progressive perspective. just like the Democratic strongholds of Portland, Chicago and Seattle with all the antifa violence, arsons and assaults....

Seems about right from a progressive perspective. just like the Democratic strongholds of Portland, Chicago and Seattle with all the antifa violence, arsons and assaults....

democrats changing their tune about that slightly.

from there are no riots to if there are riots donald trump is causing them.

They have to get that bag off of Sir John A. Macdonald’s head and remove that rope around his neck.
Canada’s first prime minister looks like he’s been kidnapped, tortured and even hanged.

It’s painful to look at — gross, even. It’s not right. 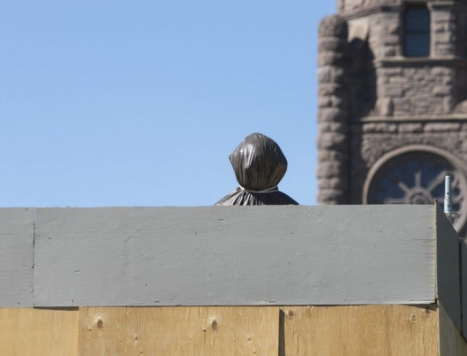 Although Queen’s will cancel John A. Macdonald, purportedly on the grounds that he was a racist white man, his demise has little to do with the man himself and everything to do with what he has come to represent

Regina city council has voted to remove a statue of Sir John A. Macdonald from a park and place it in storage until a new home can be found for it.

Macdonald was Canada’s first prime minister but his role in establishing colonial systems, including Indian residential schools, led to calls for the removal of the bronze statue.

Charlottetown city council has voted to permanently remove a statue of Sir John A. Macdonald from a downtown intersection as a response to recent revelations about Canada's residential school system.

The decision late Monday followed a vigil earlier in the day where demonstrators placed 215 pairs of shoes next to the statue of Macdonald, whose government introduced the residential school system in 1883.