Victoria, BC – Officers with VicPD, Saanich Police, the Integrated Canine Service (ICS), and the Greater Victoria Emergency Response Team (GVERT) arrested a man in Saanich this afternoon in relation to a robbery with a firearm in Victoria last night.

Wesley Ronald HANC (born 1992) was arrested by ERT Sunday and charged w/robbery and use firearm. Has lengthy previous in the Victoria area from 2018, including robbery, firearm, PPT, Utter Threats and multiple breaches, with sentences up to about 230 days. Originally from Oshawa. Photo from his Facebook page. 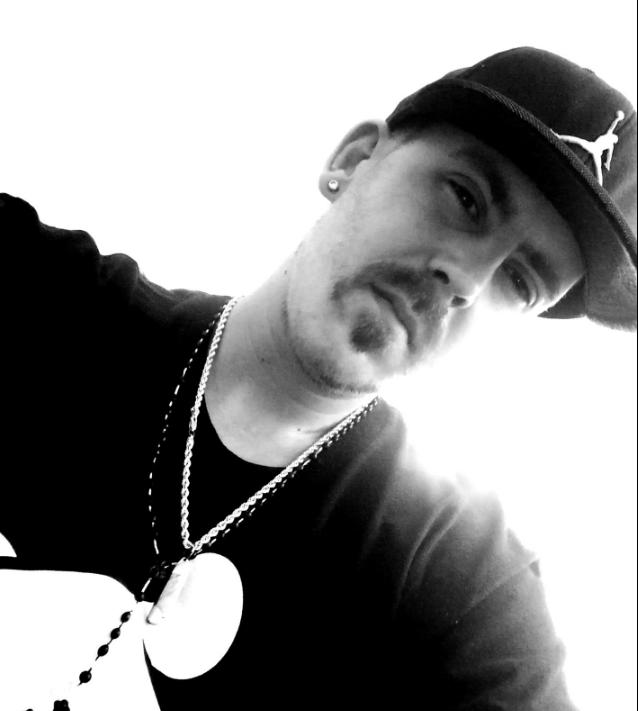 Arrived in 2018 from ON. One of Lisa’s precious invited guests (bring it on!)

The sentences are a joke. Zero deterrent

Suspect Sought After Mischief At BC Legislature During Protest

Victoria, BC – Officers are seeking a suspect after a mischief at the B.C. Legislature during a protest on Friday.

Protestors gathered at the B.C. Legislature at approximately 3:30 p.m. on Friday, November 26th, in response to Prime Minister Justin Trudeau’s visit to meet with Premier John Horgan and members of the B.C. government regarding ongoing flooding in British Columbia. Officers with the Integrated Public Safety Unit (PSU) attended to help ensure that everyone was safe and that rights to safe, peaceful and lawful protests were respected. Officers worked with members of the public and protest group to keep everyone safe and ensure lawful access to the buildings.

After the end of the meetings and the departure of the Prime Minister and the Premier, PSU officers departed. A short time later, VicPD received reports of mischief on site.

A suspect is being sought in relation to a mischief which occurred on Friday evening. This suspect is described as a Caucasian man, standing approximately five feet, ten inches tall, with a light brown goatee-style beard with a braid, curly shoulder-length brown hair and a medium build. He was wearing a zip-up white and grey Cowichan-style sweater, green “army” pants, dark-coloured boots and a multi-coloured knitted toque. Two photographs of this suspect are below.

If you recognize this man, or have information about this incident and have yet to speak with officers, please call the VicPD Report Desk at (250) 995-7654 ext 1. To report what you know anonymously, please call Greater Victoria Crime Stoppers at 1-800-222-8477.

In addition to this investigation, officers with the Legislative Assembly Protection Services (LAPS) took a different man into custody for mischief on Friday evening. After that man was arrested, approximately 20 persons attended the Legislature building and began kicking at the doors, demanding that he be released without charge. They then reportedly began to attempt to blockade building exits. VicPD Patrol officers attended to transport the arrested man to VicPD cells. Officers de-escalated the group and transported the man to cells without further incident.

The suspect, an Alberta man, was released with a court date and conditions, including conditions not to attend the B.C. Legislature precinct. He faces recommended charges for mischief. 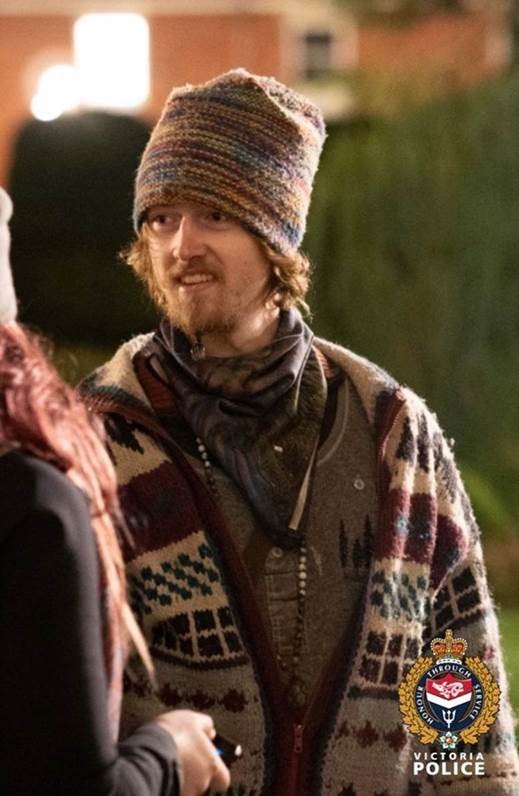 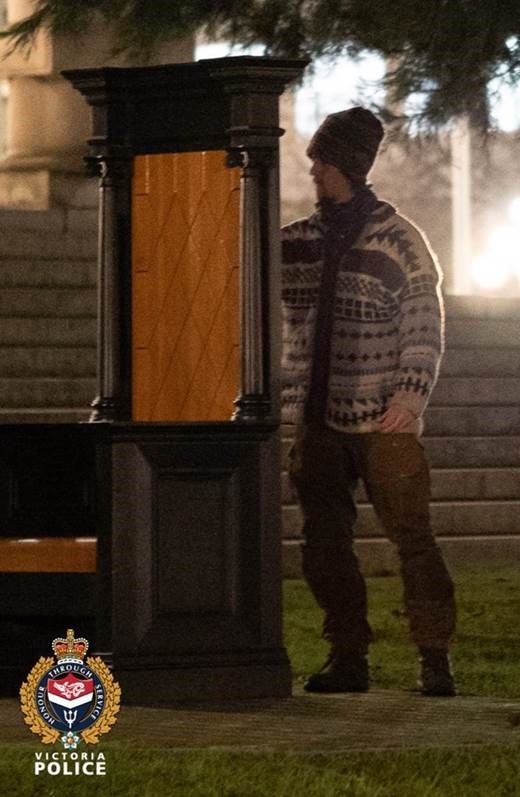 Graffiti on the back of the speaker’s chair site out back. Looks like a tree defender…

His sweater design is Navajo cultural appropriation. I've alerted the woke police of his true crime.

The family of a man stabbed to death in Chemainus in May 2016 is thankful that after five and a half years, his killer has pleaded guilty to second-degree murder.

Colin John, 30, of Chemainus, pleaded guilty Tuesday in B.C. Supreme Court in the death of 20-year-old Derek Descoteau of Duncan. John also pleaded guilty to the aggravated assault of Descoteau’s girlfriend, Janelle Guyatt, on May 20, 2016. The 16-year-old was stabbed five times and seriously injured.

The trial began in late 2018. It heard that in May 2016, Descoteau and Guyatt were watching a movie in his father’s home in Chemainus when a man suddenly burst in and stabbed them. Descoteau died on the way to hospital.

Justice Lisa Warren ordered that a presentence report with a psychiatric component be prepared to assist at sentencing. The reports are expected to be complete by Jan. 11. Crown and defence expect to set a date for a three-day sentencing hearing on Jan. 17.

A Vancouver Island bookkeeper who pleaded guilty to defrauding her employer of more than $70,000 has received a two-year jail term following a Crown appeal of her sentence.

In October 2020, Renee Patricia Merkel entered the guilty plea to one count of fraud over $5,000 for the offence committed against Errington Cedar Products Ltd., a family-owned sawmill which employed about 50 people.

Merkel, who had access to the company’s timekeeping and payroll systems and oversaw the payment of wages, used a complicated scheme involving multiple transactions to defraud the company from April 2017 to July 2018.

Justice Gregory Fitch noted that although it wasn’t necessary for him to address the point, it was clear that the house arrest sentence for Merkel, who had committed a similar fraud against three previous employers, was demonstrably unfit.

Colin John, 30, of Chemainus, pleaded guilty Tuesday in B.C. Supreme Court in the death of 20-year-old Derek Descoteau of Duncan. John also pleaded guilty to the aggravated assault of Descoteau’s girlfriend, Janelle Guyatt, on May 20, 2016. The 16-year-old was stabbed five times and seriously injured.

Sort of an unclear way to state the girlfriend's age.

West Shore RCMP arrested a woman after receiving several reports that a vehicle had crashed into multiple parked cars on a residential street in Colwood.

On November 30, just after 3:15 a.m., West Shore RCMP Frontline officers were called to the 400 block of Dressler Rd in Colwood after some residents were awoken to a loud crash. When those residents got outside to investigate, there was nobody around. Upon reviewing their home video surveillance, they were stunned to observe a small Sport Utility Vehicle (SUV) turning onto Dressler Rd and striking one of the vehicle, bouncing off it, and striking another vehicle on its side, causing it to move horizontally before leaving the scene.

During the course of the investigation, police were able to determine that the same vehicle was responsible for crashing at both locations and were able to trace down the vehicle due to the vehicle identification number (VIN) collected from a piece of its bumper – which was left at the first collision scene.

Police subsequently attended a residence in Metchosin where they found the SUV and arrested the driver, a 42 year-old woman of Metchosin, who was allegedly impaired by alcohol.

The actions of the driver were simply terrifying, states Cst. Alex Bérubé, spokesperson for the West Shore RCMP. The rippling effects of impaired driving are devastating and luckily nobody was in the destructive path of the driver.

The investigation is ongoing. If you have information about this incident, please contact the West Shore RCMP at 250-474-2264.

one of the things many that have this view miss, is that when a person is in jai, they cannot commit more crimes.  another is that drug rehab or services work.  they rarely do.  and thirdly here, the view is that if the person is going to steal to buy drugs, we should just give them free drugs.  but that's an odd view.  if a person stole boats in order to go sailing, we'd rarely suggest the answer is giving "sailing addicts" free boats.

While he admits those crimes are unacceptable, he points out if you arrest and jail a drug-addicted, mentally ill person, when they get out of jail a few months down the road you will still have a person who is mentally ill and addicted to drugs.

Mulligan said society would be better served by investing resources into support services and offering safe supplies of drugs. “If the threat of death is not deterring you from using drugs, the threat of me asking you to go to jail for a period of time is not going to have that effect either,” he said.

Hey Greater Victoria
Do you recognize this truck?

Saanich Police are looking to speak to the driver, who was involved in a collision with an e-scooter on Nov 26 just before 9am on Glanford Ave at Vanalman Ave.
The driver described as 40-50 yrs, grey beard, grey hair wearing a high-vis vest.
File #21-26553
If you know who owns this truck and you want to tell us anonymously, please click the 'Contact Us' button above, or call 1-800-222-8477. You may also submit a tip online at www.victoriacrimestoppers.ca

MacKay and his wife, Nicola*, were foster parents from 2004 to 2014. Between 2004 and 2011, they lived with their three children and several foster children on Vancouver Island.

The offences were committed against a boy who lived with MacKay and his wife from the age of four to 11. The offences took place from 2005 to 2009, starting when the boy was five.

The second victim was a seven-year-old girl placed in the foster home in 2008. The offences came to light after the children, who are not ­siblings, were no longer with the ­MacKays and had been placed in other foster homes. The two children eventually, separately, disclosed what had happened to West Shore RCMP.
*-Link to a T-C article about Nicola (pictured) and the MacKay foster family in 2008. Father Kurk isn't mentioned: https://www.pressrea...281539401774946
More: https://www.timescol...ng-kids-4825444

Gas Station Robbery with a Knife

A gas station was robbed at knifepoint this afternoon in Saanich, prompting an alert from the Saanich Police to be on the lookout for the vehicle involved.

On Friday December 3, 2021 at approximately 3:00 pm the suspect entered the gas station storefront at the corner of Burnside Road West and Harriet Road, produced a knife to the cashier and demanded money. The suspect left the store with an undisclosed amount of cash, got into a red Hyundai Kona, and was last seen driving westbound on Burnside Road West. No persons involved were physically injured.

The suspect was described as a man, 5’5”, slim build, short dark hair, wearing a black and white mask, glasses, and a long, black-sleeved shirt with a white undershirt.

The vehicle was a red 2022 Hyundai Kona with BC licence plate HJ635J, which police have now confirmed was reported stolen this date from the Nanaimo area.

“If you see this vehicle with the matching plate, please call 9-1-1 immediately. Do not approach the suspect, as he is considered armed and dangerous.”

*Pictures are not the actual vehicle.

Turnabout is fair play. Most gas station robberies take place at the pump and the victim is the consumer.

Turnabout is fair play. Most gas station robberies take place at the pump and the victim is the consumer.

isn’t the consumer responsible for robbing the climate?

isn’t the consumer responsible for robbing the climate?

The woman, 26, who texted the boy, inviting him to a “hot-make-out sesh,” has also been convicted of communicating with a person under the age of 16 for the purpose of committing a sexual assault.

Dear Suspects
On the day that these photos of you and your car were taken, you decided that you would break into the Home Hardware in Sidney and steal thousands of dollars’ worth of items. You stole everything from 4 gas generators, a snow blower, a birdbath to even Christmas lights.
We understand that these pictures of you are not the best, but someone out there will recognize the clothing you were wearing, or even the car you were driving.
We have faith that we will get information that will lead to your arrest.
See you soon
Greater Victoria Crime Stoppers
If you know who with of these suspects are, or if you recognize the car they were driving, please let us know anonymously by clicking the ‘Contact Us’ button above. You may also anonymously tell us by calling 1-800-222-8477.
SN #21-5463