I am not sure one could say the CoV currently shows any governance of Beacon Hill Park.

This is just a scheme for the left to transfer blame for the park to a different group composed of their friends so they can continue to do as they want. This is just evil.

And FNs are beyond reproach or even criticism for anything in this day and age. So perfect!

Obviously this is just theatrics and there's no noble intention behind it. But the irony is, if there were actual true co-governance it could easily backfire on the CoV and end up benefiting the park and people in a huge way (assuming the new co-governor actually cares one bit about the park's identity as a park). What would the CoV do in that case? Would they openly fight against their co-governors?

Heck, maybe we'll be enjoying yet another heaping dose of cognitive dissonance before too long? Invite co-governance today, but then battle every potential positive outcome of co-governance tomorrow? Voila, another manufactured crisis and controversy, for no other purpose but to make heads spin.

*not in a million years

Once-progressive Friends of Beacon Hill Park used to fight for the marginalized. What happened?
The group was founded to protect a section of the park from a homophobic backlash. Now it finds itself fighting against a different marginalized group.
It was the late eighties, and the people of Victoria were up in arms: gay men were rumoured to be using the wooded section in Beacon Hill Park’s southeastern corner for hookups.

“Local residents have complained that the Cook Street-Dallas Road section of the park is not safe,” the Times Colonist reported in September of 1989.

“They said that prostitutes frequent the area and homosexuals meet there.”

The fact that the noise, drinking, and speeding up and down the road was much more likely due to teenagers drinking on Dallas Road beach than gay men trying to keep a low profile was lost in the rush to clear out the park. A proposal was put forth to clear the trees and bushes from the park’s wooded corner.

“They wanted to evict the gays from the woods,” Roy Fletcher recalls.

Into the witch hunt stepped Roy’s sister, Anne Fletcher, at the head of a fearless, progressive group. Calling themselves the Friends of the Southeast Woods—they would later change the name to the more inclusive Friends of Beacon Hill Park—the group fought hard against the fear-mongering and prejudice that was pushing the city to crack down on vulnerable people. Roy, a survey engineer, drew up an environmental map, and the group led hundreds of people on walks through the woods to show that it was safe, and to demonstrate what would be lost if it was cleared away. They spoke at council meetings and to the media.

“Don’t hide behind the issue of homosexuals,” activist Betty Gibbens said at the time. “If people are nervous they can go someplace else.”

Once-progressive Friends of Beacon Hill Park used to fight for the marginalized. What happened?

Okay but then it needs to acknowledged the differences between the groups - a group of people who discreetly and temporarily meet with specific others of same group, and in very specific areas only, maybe leaving a condom behind - versus a group of people, who aggressively and violently interact with anyone, and live (squat?) all over the park, leaving incalculable trash and tears in their wake.

As a gay man I do not appreciate how this article is pointing fingers saying if they did it for us they should do the same for them. Comparing apples and oranges? The farm opened for just six days in March 2020, around the time COVID-19 was beginning to raise eyebrows. Her husband Dennis Koenders watched the news March 11, Lynda said, “and he saw what was happening in Europe and said ‘this is going to hit us hard.’ We did not want to be like a super spreader, because spring break was coming up and we’re very, very busy,” she said, noting thousands of visitors traditionally come by in that period.

With not a lot of room for people for move between the pens, they made the decision to close. If and when they reopen, Koenders said, it’ll likely be with one-way paths, a maximum number of people, mandatory mask and hand sanitizer use and different rules for the petting area.

...If and when they reopen, Koenders said, it’ll likely be with one-way paths, a maximum number of people, mandatory mask and hand sanitizer use ...

Even once the majority of people are vaccinated? That's going to be a lot of fun.

Hey kids - wanna go to the petting zoo? Mommy just has to get your hazmat suits ready.

Even once the majority of people are vaccinated? That's going to be a lot of fun.

Hey kids - wanna go to the petting zoo? Mommy just has to get your hazmat suits ready.


Hazmat to protect the children or protect the animals? We've yet to fully understand human-to-animal transmission of the virus, asymptomatic or otherwise.

Walked a good portion of the park today. Tents and Camper Vans were nowhere to be seen...(vans are parked on Douglas Street and Dallas Road)

Tons of families and couples. Way more than a few weeks ago.

The petting zoo has some of the regular residents visible from outside the fence.

...these guys though have taken back their turf...

I'm not sure if this one took a liking to me ...or if he wanted me to piss off. 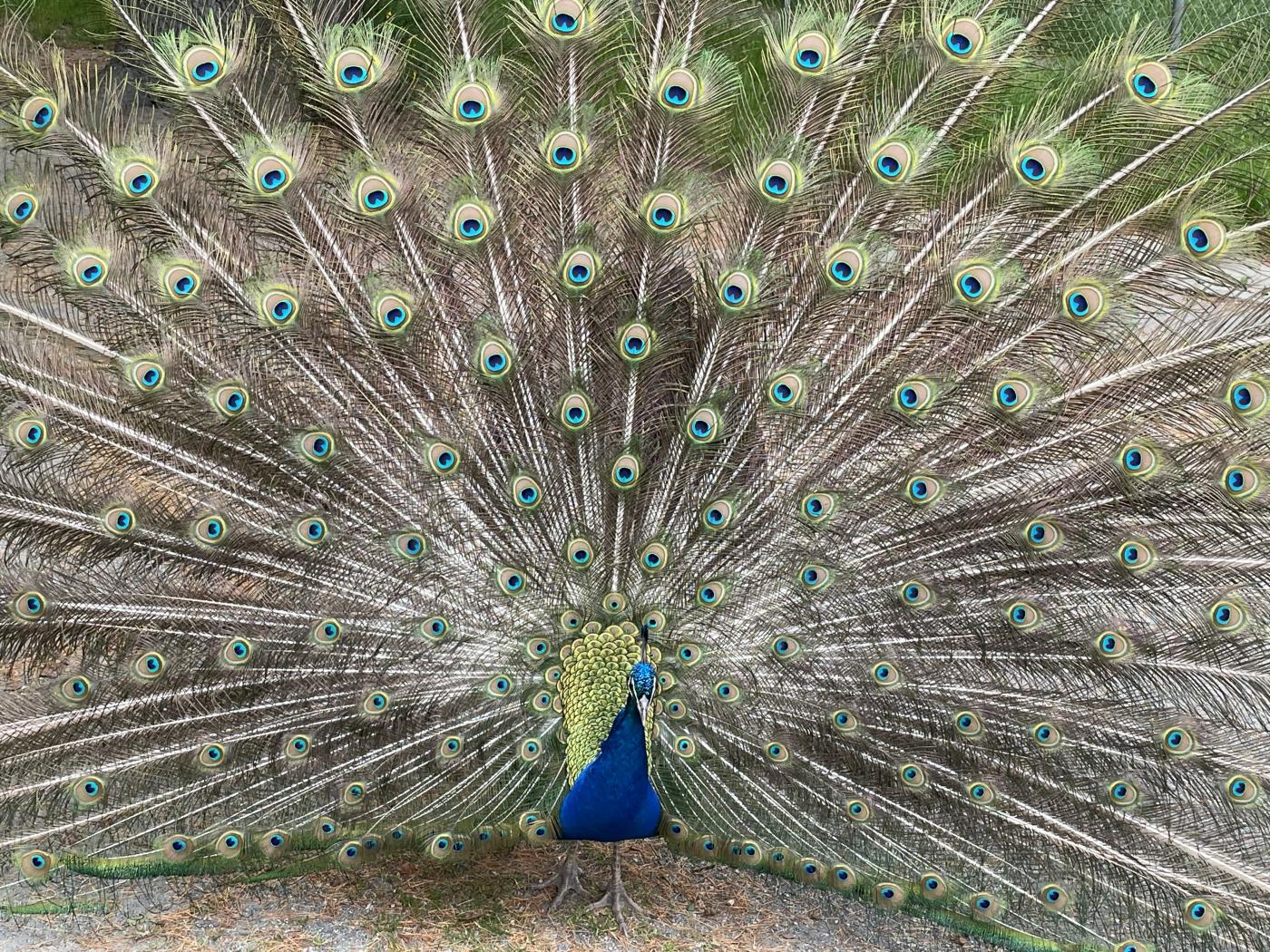 A series of small fires in Beacon Hill Park led to the arrest of a woman wanted in Duncan.

At approximately 5:30 p.m. on Sunday (July 18), the Victoria Police Department responded to a report of a woman using a small torch to ignite the grass at Beacon Hill Park. Several bystanders were following the woman, extinguishing the fires before they could spread.

The first officer to respond found the woman near the intersections of Douglas and Simcoe streets. While attempting to arrest the woman, she fled to a nearby van, which she started and attempted to drive away in, according to a release from VicPD. At this point, the officer deployed pepper spray, forcing the woman out of the van, but she fled on foot.

The officer stopped the running van and called for backup.

Officers were then flagged down by a person on Douglas Street, who said a woman had broken into their suite, taken clothes from their closet and started a shower. Officers entered the suite in question and located the woman in the bathroom, who was then arrested without further incident.

So is she back out free to set fires again yet?

“..They are also, according to social media, popping up all over the south end of Greater Victoria — UVic, Willows Beach, Uplands, Fairfield. Birds based in Beacon Hill Park often range into residential areas in the spring, but Facebook has been aflutter (as it were) about this year’s peacock proliferation...”: https://www.timescol...zzle-1.24343420


They are a classy bird i’m sure they couldn’t approve of what they’ve been seeing.

Multiple groups representing people with mobility challenges have filed a human rights complaint against the City of Victoria over vehicle access in Beacon Hill Park.

Susan Simmons, president of the MS Wellness Centre — one of the groups involved in filing the complaint — said they don’t actually want to take the issue to the B.C. Human Rights Tribunal, but they are fighting to reopen at least one road in the park that would allow people to drive to a parking lot near the children’s playground.

Coun. Stephen Andrew has repeatedly brought the issue to council in an unsuccessful attempt to reopen all roads.

“It’s nothing to do with cars actually. It has to do with the people inside the cars, and a lot of seniors, and a lot of people within the disability community have contacted me and said, ‘You know this is just not fair. We don’t get to enjoy the park,’ ” Andrew said. “I do see it as a human rights issue, not an issue of reducing traffic in the park.”

Mayor Lisa Helps declined to comment because of the human rights complaint.

Bridge Way will become a two-way road, opening to vehicles in about a month

Coun. Stephen Andrew told Black Press Media that people living with disabilities were not properly consulted when the roads were closed and again now with the reopening strategy.

Andrew wanted council to reconsider an original motion that called for several roads in the park to reopen to vehicles.

So if you drive in on that blue bit, how do you turn around? What if you don't have an official handicapped sticker but just can't walk very far? Is the parking lot by the playground going to be open for the regular citizen to park and have a picnic or take their kids to the playground. I was looking at the vast length of curbing that will have to be removed. We need to still insist on Arbutus Drive being open. Or else just drive over the bollards. All the city workers do it.

So if you drive in on that blue bit, how do you turn around?

Easy fix....everyone has to back in.