Yes indeed open walls like city parkades not a utilitarian wall of nothing. It offensive.

Would you prefer a rainbow wall?

Openings like windows......such as in parkades why is it so difficult for you to comprehend must be getting stuffy in your moms basement

I don't think windows into the parkade would make any aesthetic improvement.

The blank walls are rather short. There are lots of windows where RBC and Scotiabank are. There are also trees, shrubs and green wall components. I don't think it's that bad. I think it's better looking than the hundreds of parking stalls you see from the same road at the mall across the street.

Yes well whats done is done. Cant do anything about it now.

To me, the bigger design disaster is the whole upper parking lot area being above Blanshard St level. This area, unlike the mall underneath, is basically just a giant strip mall and because it is owned by one entity and built on a common parking garage, fixing it to lower it to street level and make it street-facing retail is basically impossible.

Yeah. Thankfully the Whole Foods section is going to be better in that regard.

Have we seen renderings of the street level interaction of the residential building?

I agree. When they built one in White Rock everyone was all excited about it opening. Went in, walked around, left without buying anything, never went back.

Flaig is quoted in the minutes as saying he was proposing to erect a steel structure on a concrete slab that could eventually be moved to a new location once a master plan for the site was completed. He said the company hoped to create a development that was right for the community, but it could take three to five years to develop a comprehensive plan.

“In response to questions from council, Mr. Flaig stated: They want to be able to take their time and develop a comprehensive plan for the redevelopment of the site that will enhance the area, however, they are willing to register a covenant stating that the proposed building will remain in place for no longer than 10 years,” the minutes state.

In a letter sent to Saanich council in July this year — seven years since reopening, Flaig said comprehensive redevelopment of the site doesn’t appear to be economically viable.

“We have looked at possible redevelopment, but it appears the advent of [the Uptown shopping and office complex] and its current plans would present an oversupply of the product both commercial and residential that would likely result in economic hardship if we proceeded,” Flaig said in his letter.

“Additionally we are hesitant to proceed with improvements ... with the uncertainty of the restriction on the land.

“The property is zoned lumberyard and with the closure of many building supply operations offering product used in the construction industry we believe Lumberworld in its current location provides an important source of product for both contractors and home owners alike.”

Whole Foods is planning to open on November 2nd. They are currently recruiting staff.

Are you able to confirm a source for the opening date, TG?

Hmm. It's a fantastic location for a development, but Flaig may be right about the market being quite saturated. We don't need another mall or strip mall. Could it be a good spot for condo development? Would Saanich rezone it if so?

Are you able to confirm a source for the opening date, TG?

Sorry - should have mentioned that. Whole Foods had a recruiting tent at Camosun Lansdowne yesterday - I asked one of the people there and they said Nov 2.

I'm assuming they'll be at Interurban tomorrow as part of the opening week event there, and perhaps even at UVIC sometime as well.

Did a quick search here, but no start date is shown for the Victoria store.

This is the BEST Halloween store I've ever seen.  They've got every imaginable costume, mask, wig, prop, etc. etc.  There's a whole section just on skeletons and skulls, a whole section just for makeup - with an entire rack just of false eyelashes.  Really impressive inventory and displays.  It's across from Brown's Social House.  Check it out before it's gone. 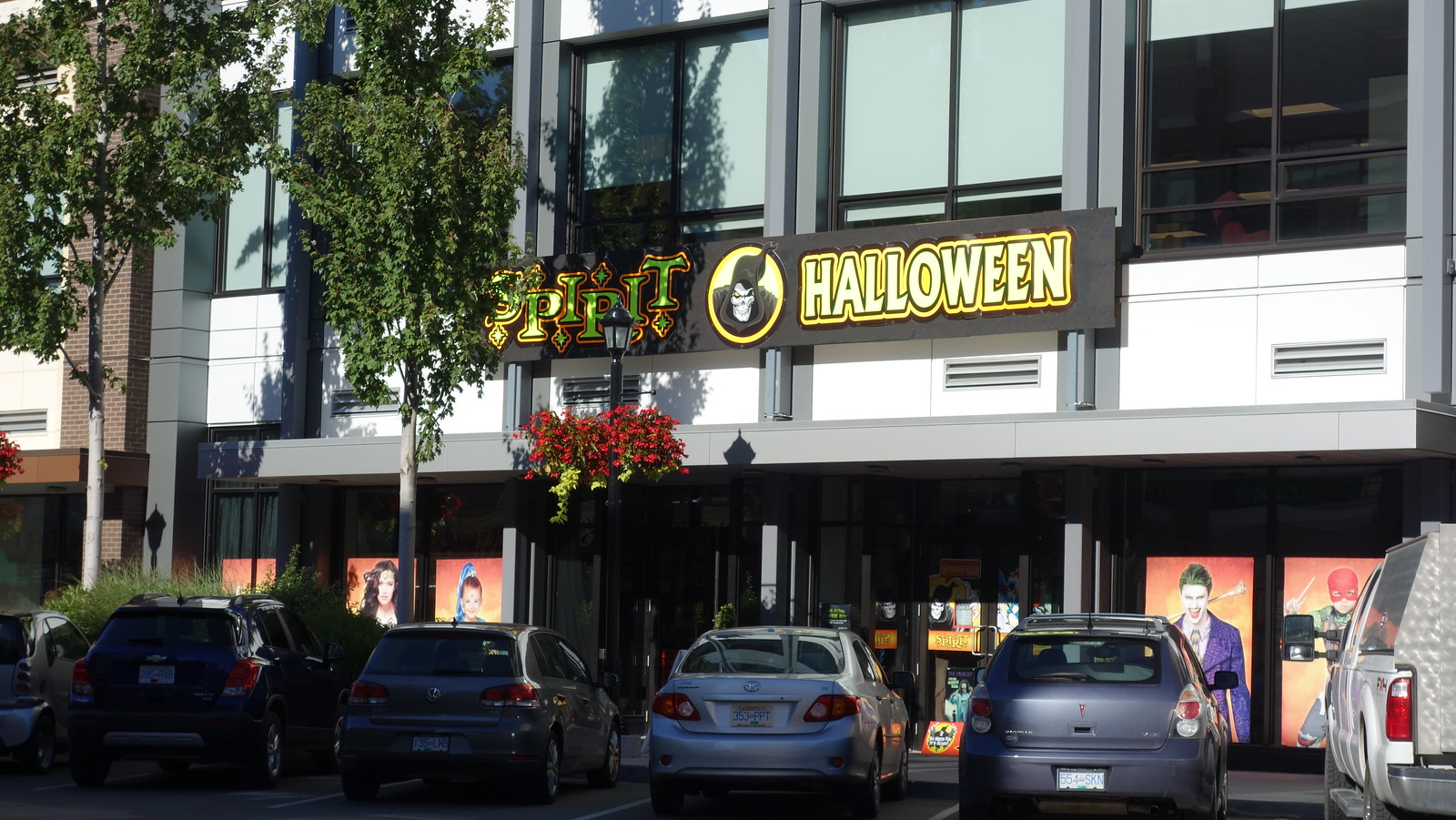 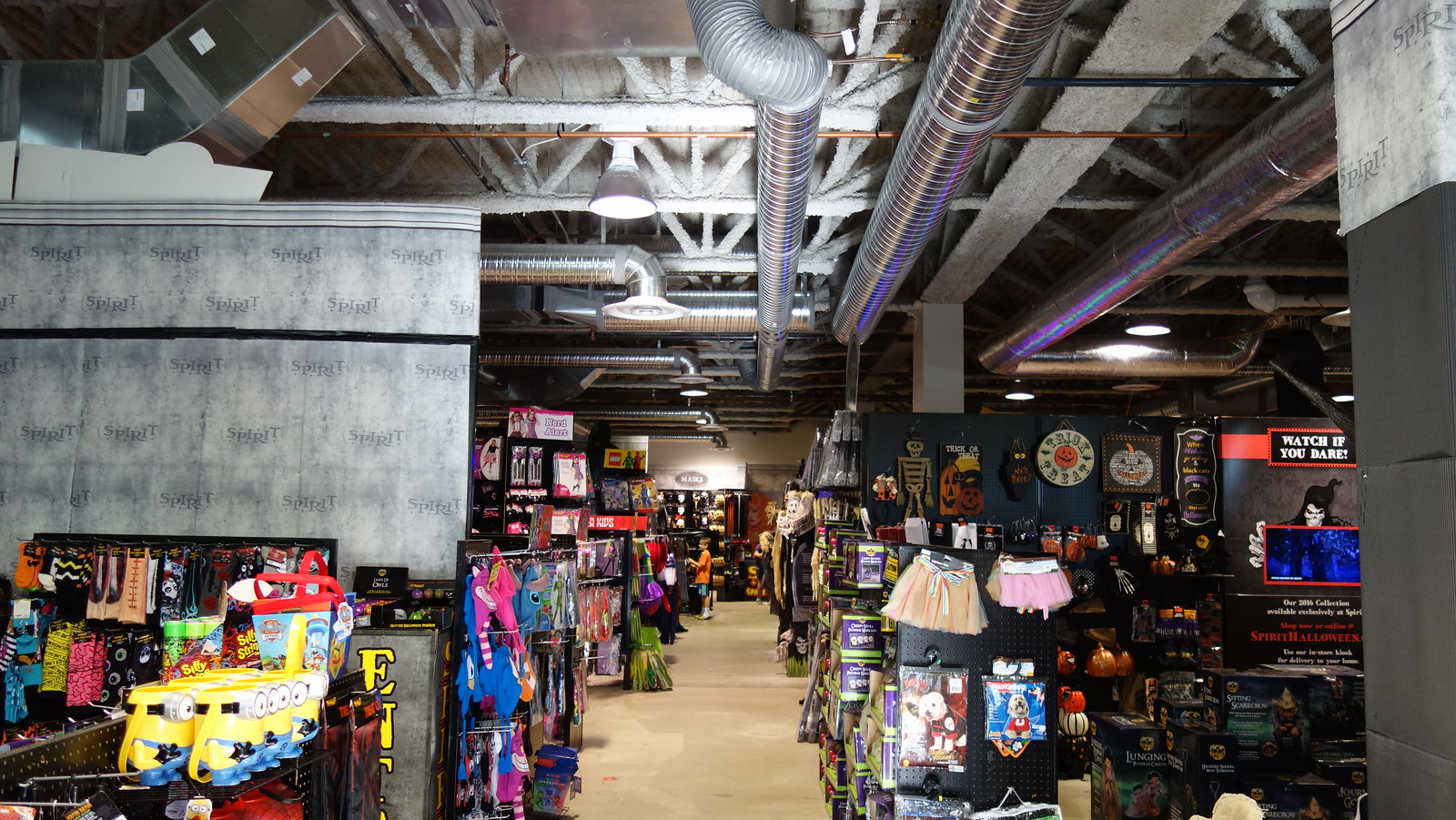 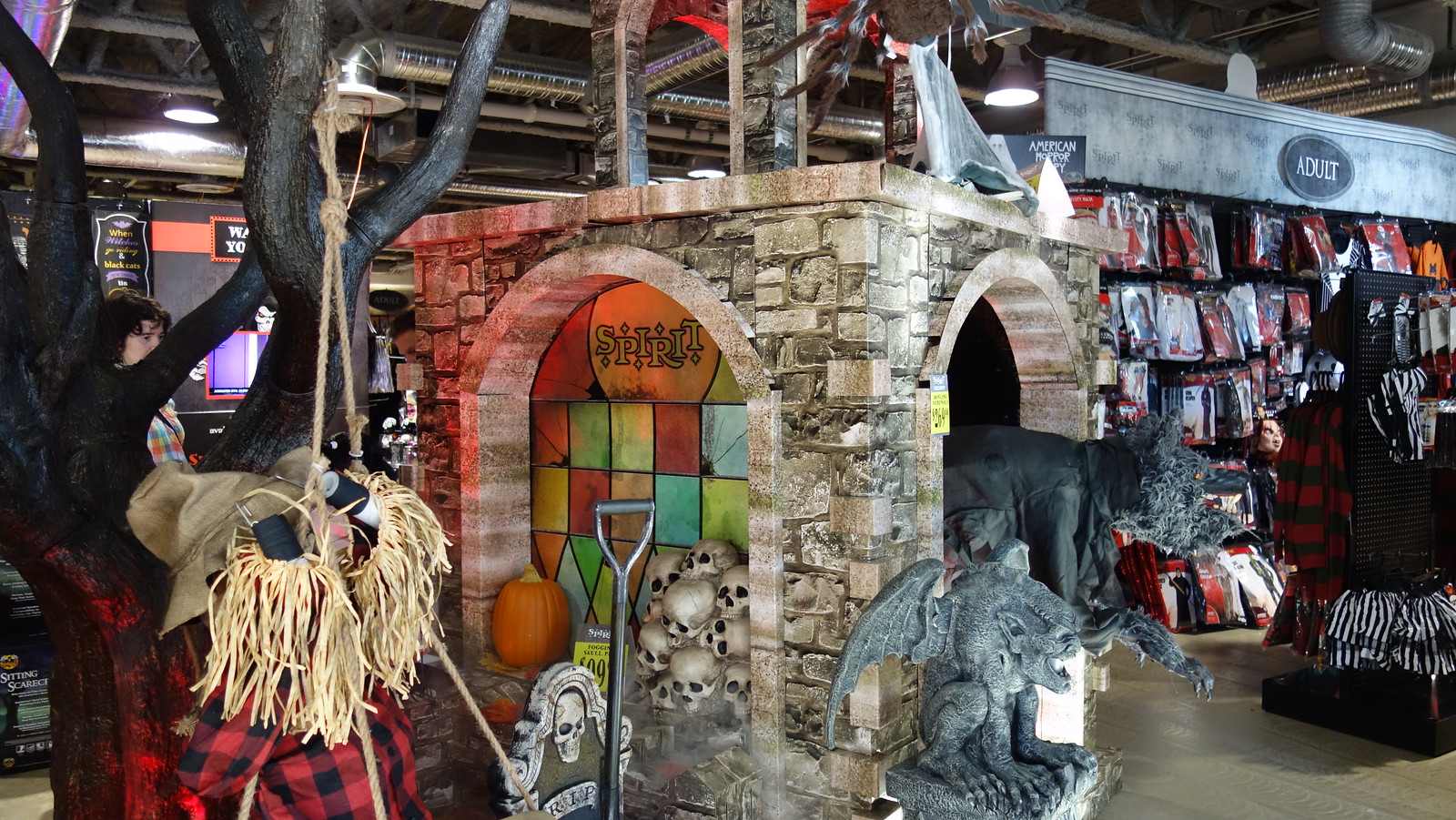 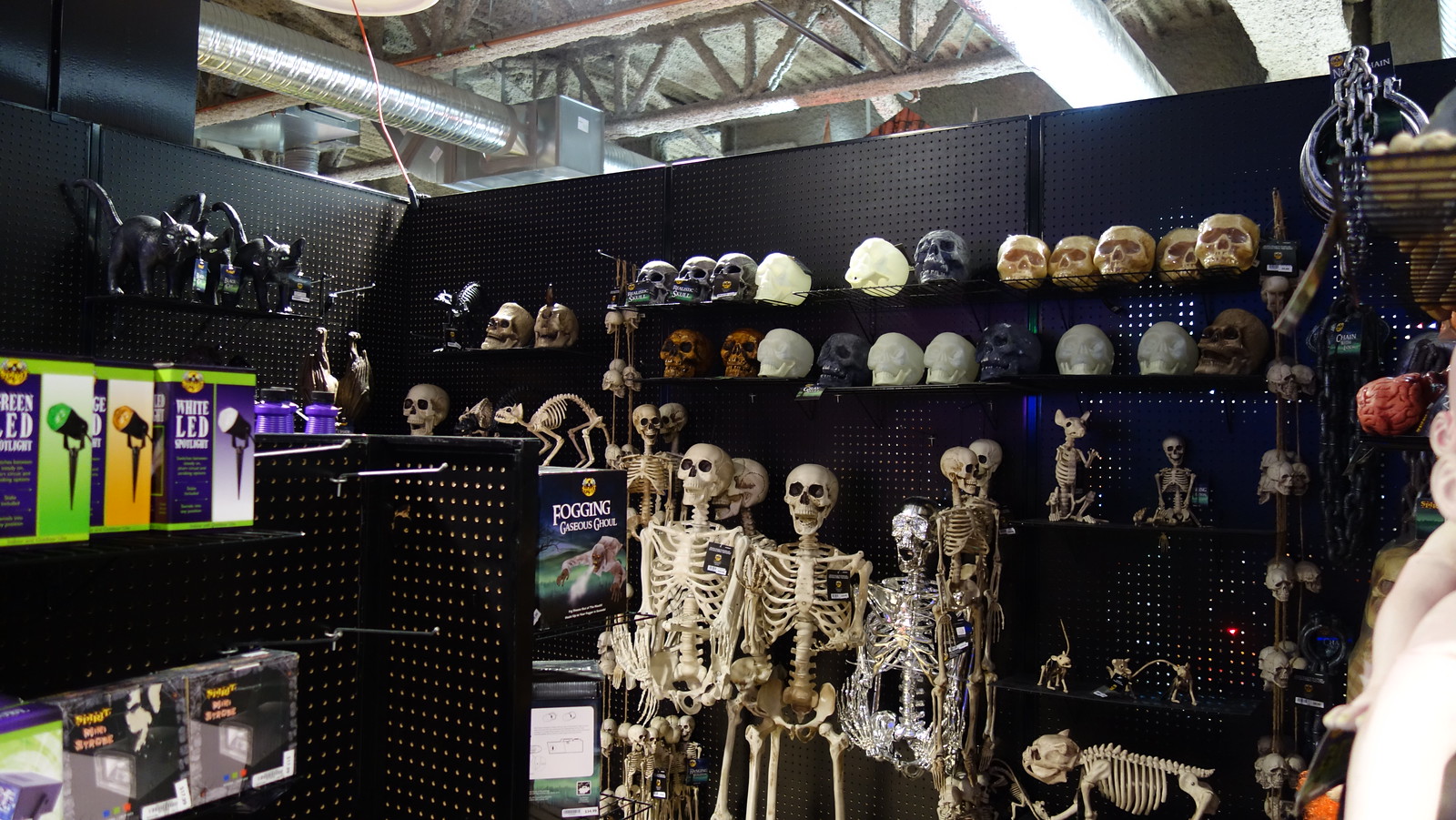 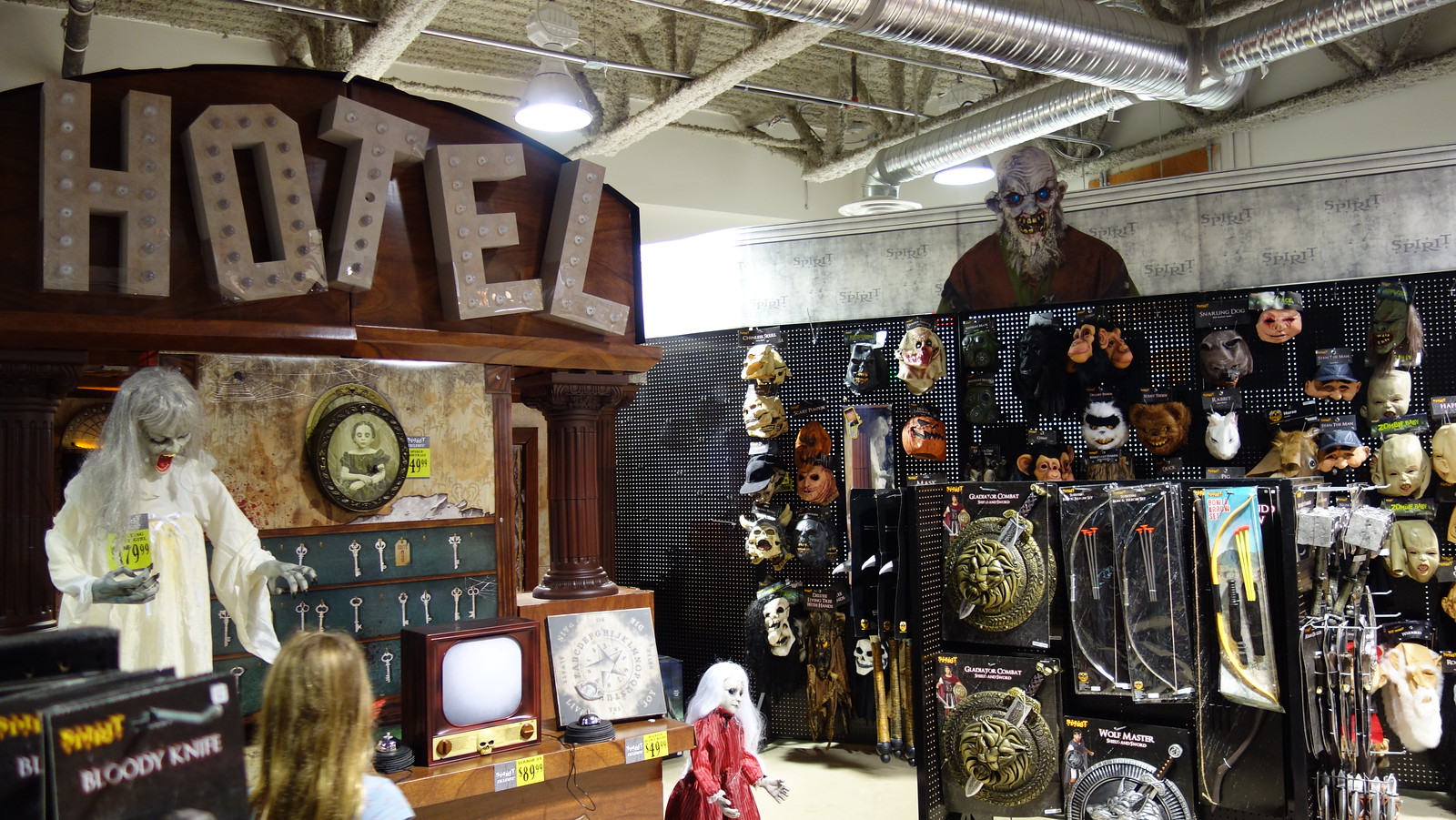 The best (former) Halloween store was in the old Macaroni Grill before it became a bank. The faux stone walls and lighting added nicely to the atmosphere.

There's still some work to do on the parking lot.   There's a large tenant, the Bone & Biscuit co., for the adjoining section.  Also, Parc Modern has now opened in their new location. 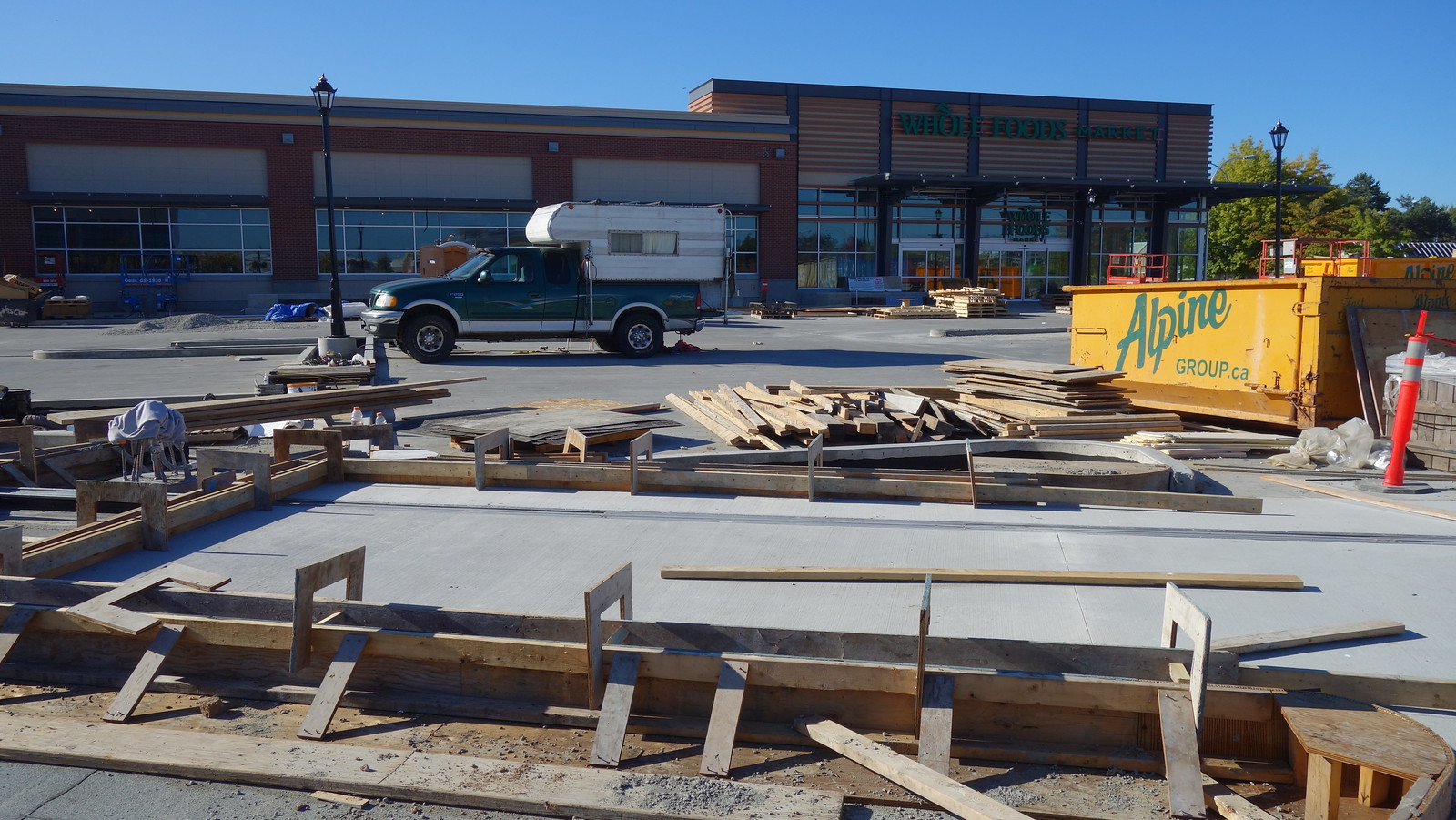 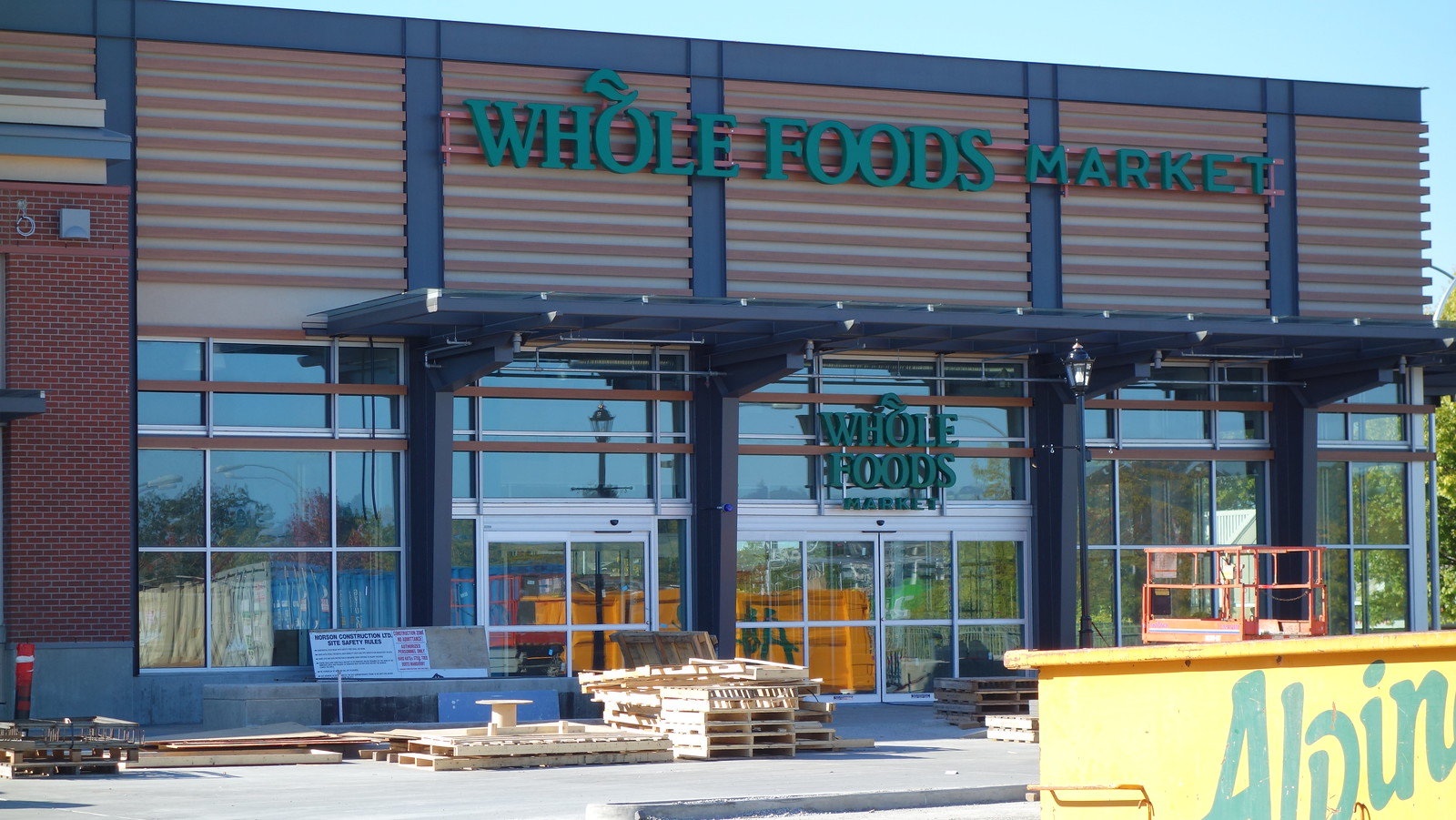 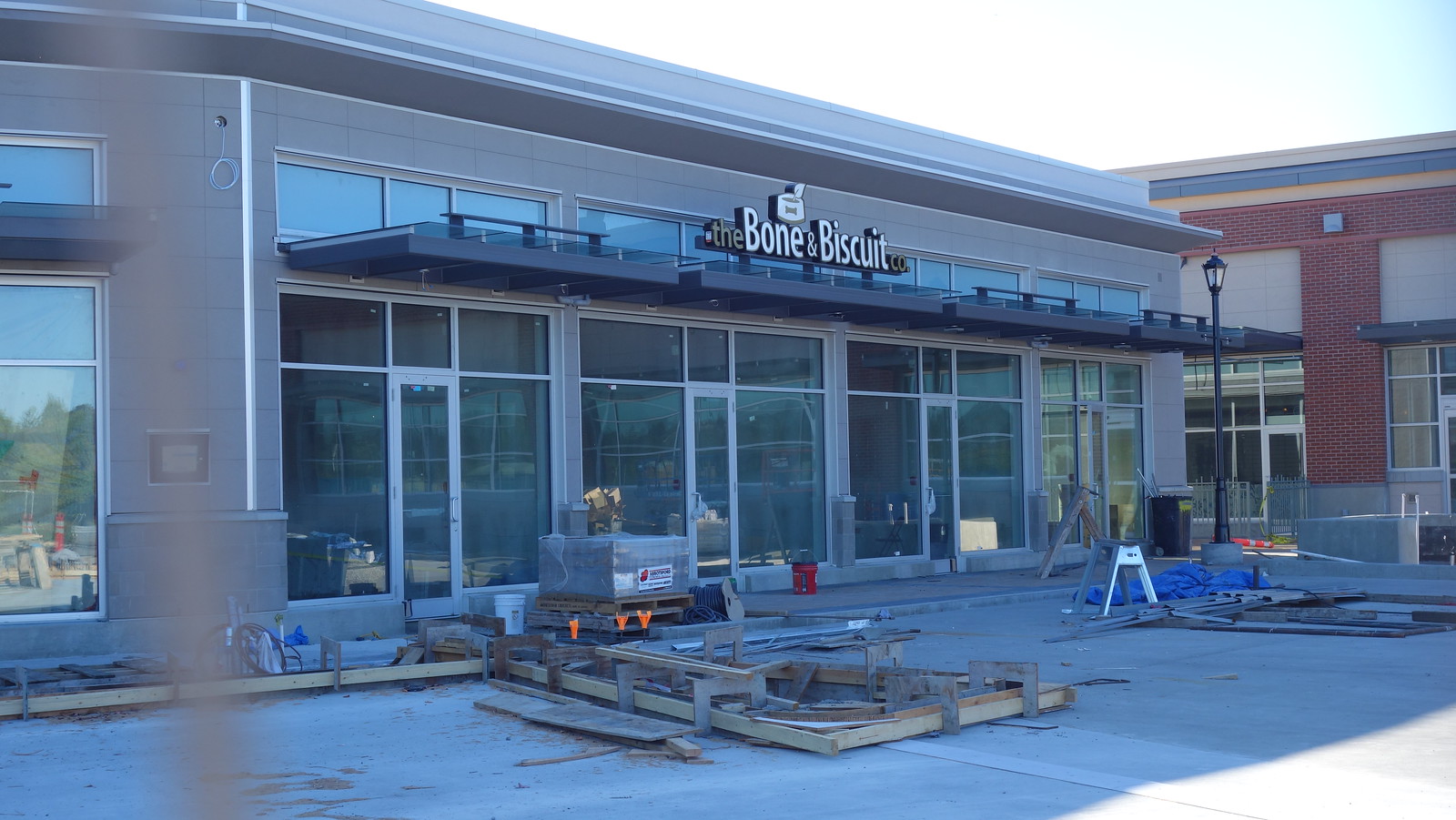 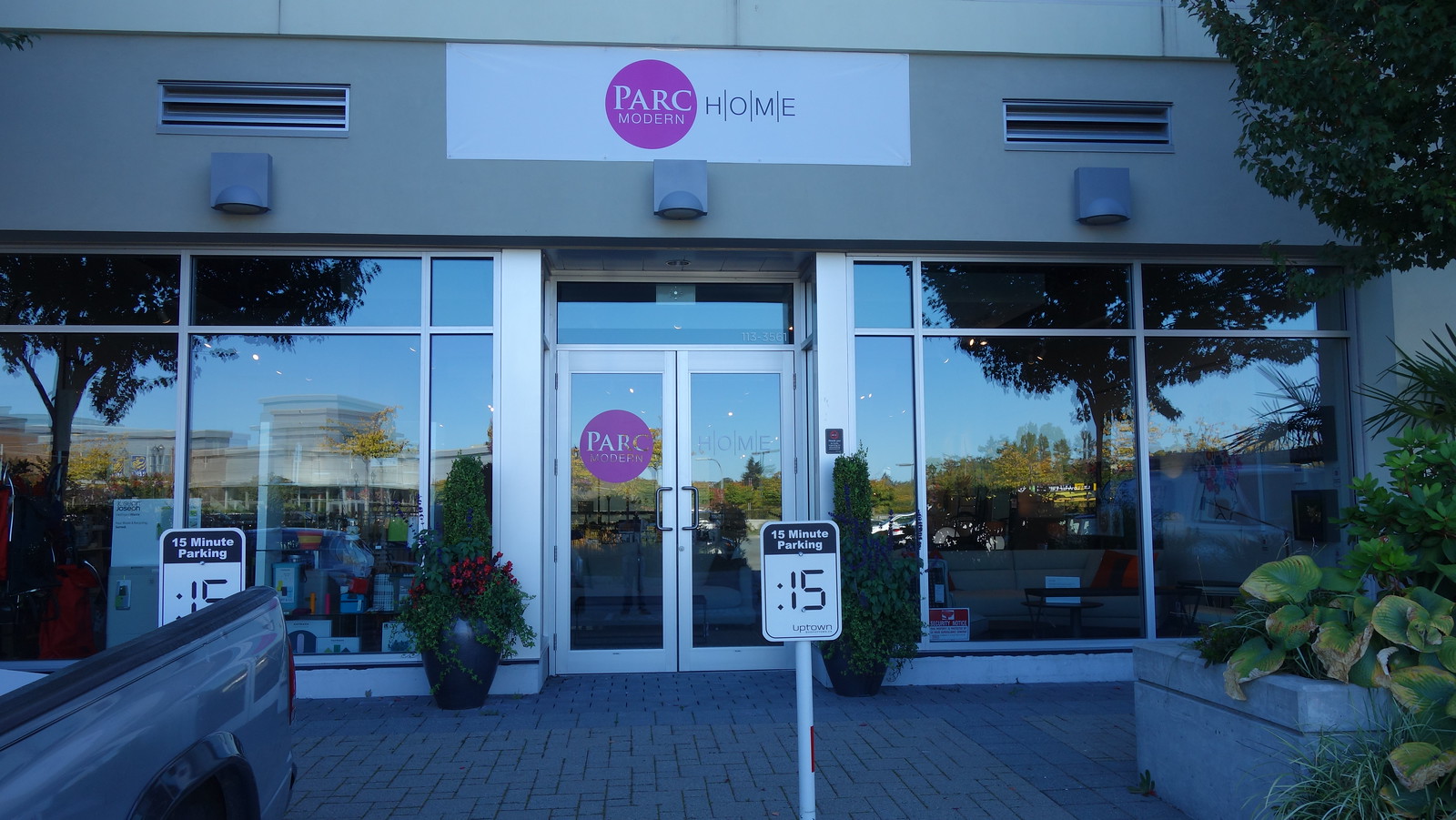 The new Browns Social House space is great. Unfortunately, the food is still mediocre. I wish it was an Earls or Cactus Club.

I agree, they did a nice job with this place, especially the patio.  It's bright, even in the late afternoon as it gets a huge amount of sun reflected off the side of the opposite building.   The cushy chair fire pit section by the entrance is especially nice.  Geez, they even have monitors above each toilet so you won't miss a shot.  Who thinks of this stuff?  Place was busy.  We biked here so only tried the sushi roll appy and took the Fettuccine Carbonara home for dinner.  Both were good.  That pic is half of the carbonara, fed us both for $17.45, reheats well. 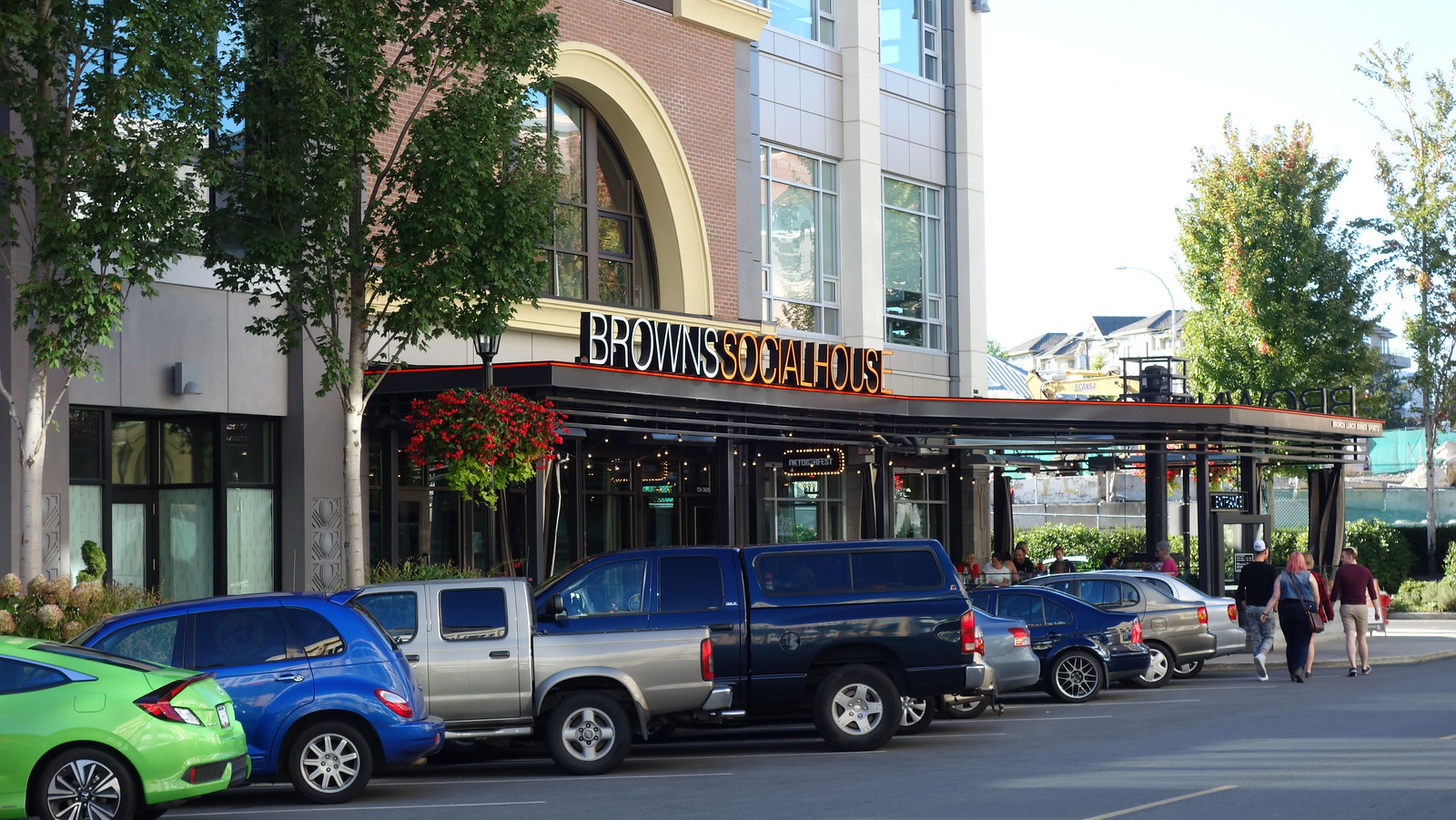 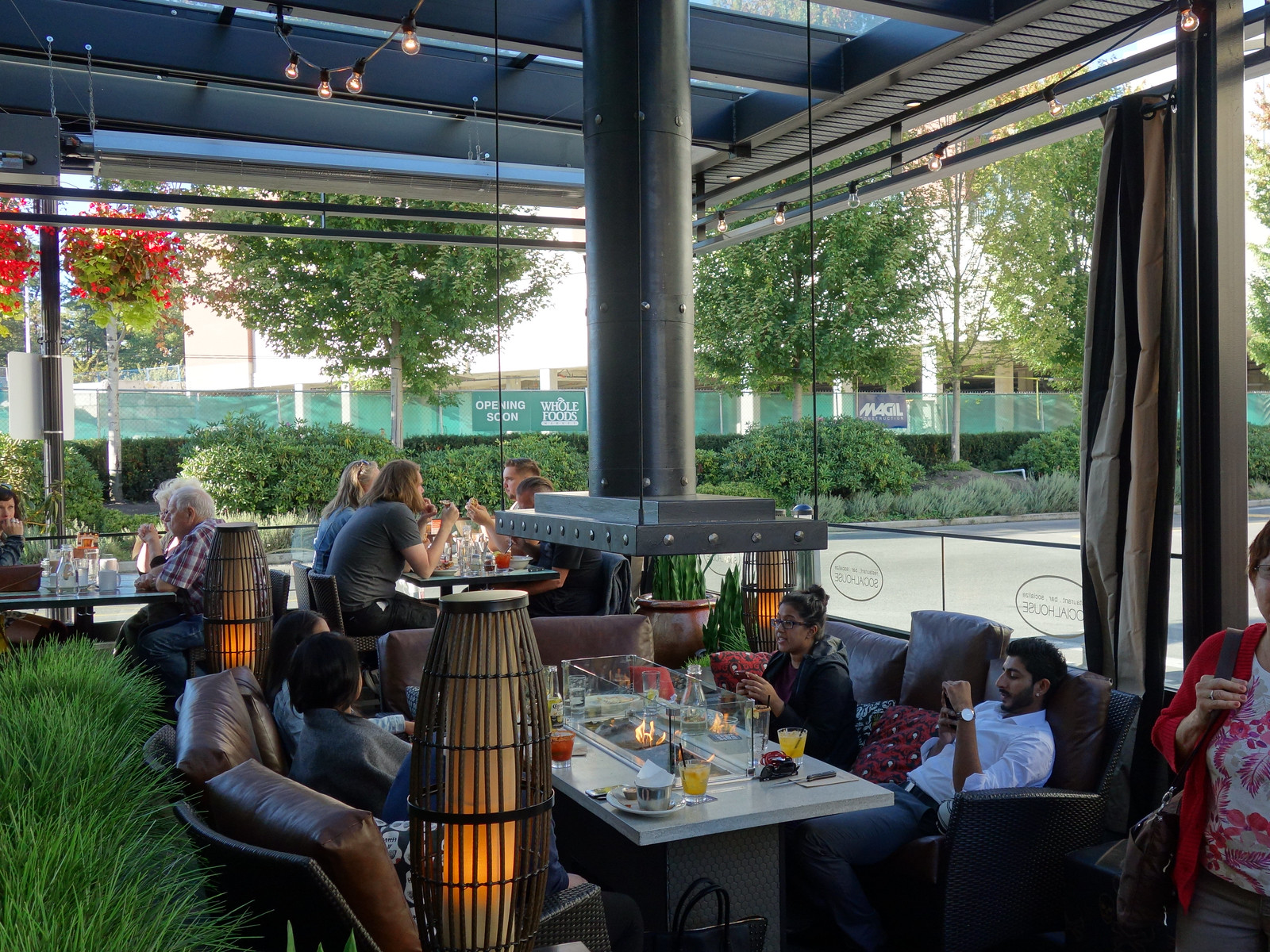 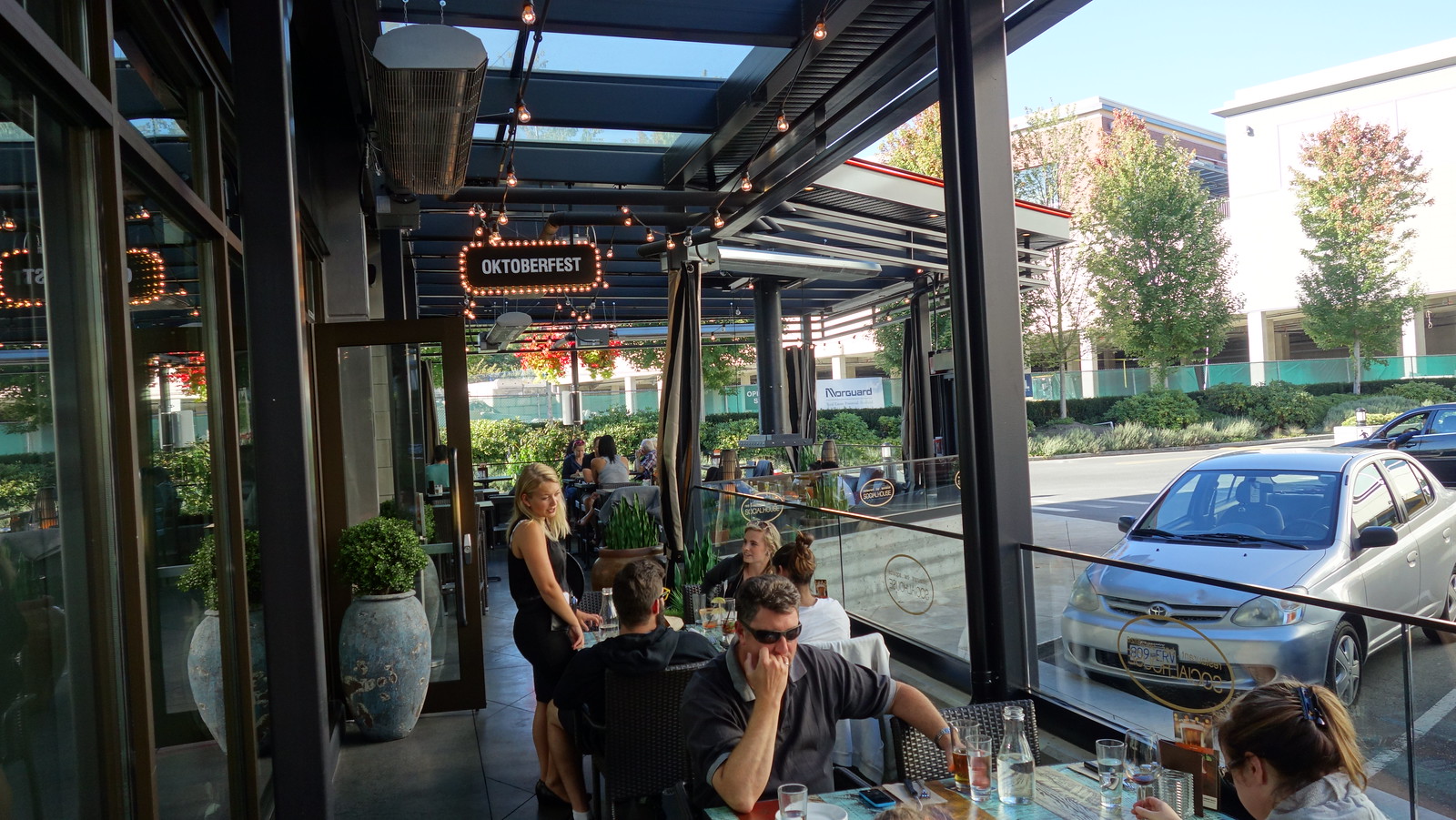 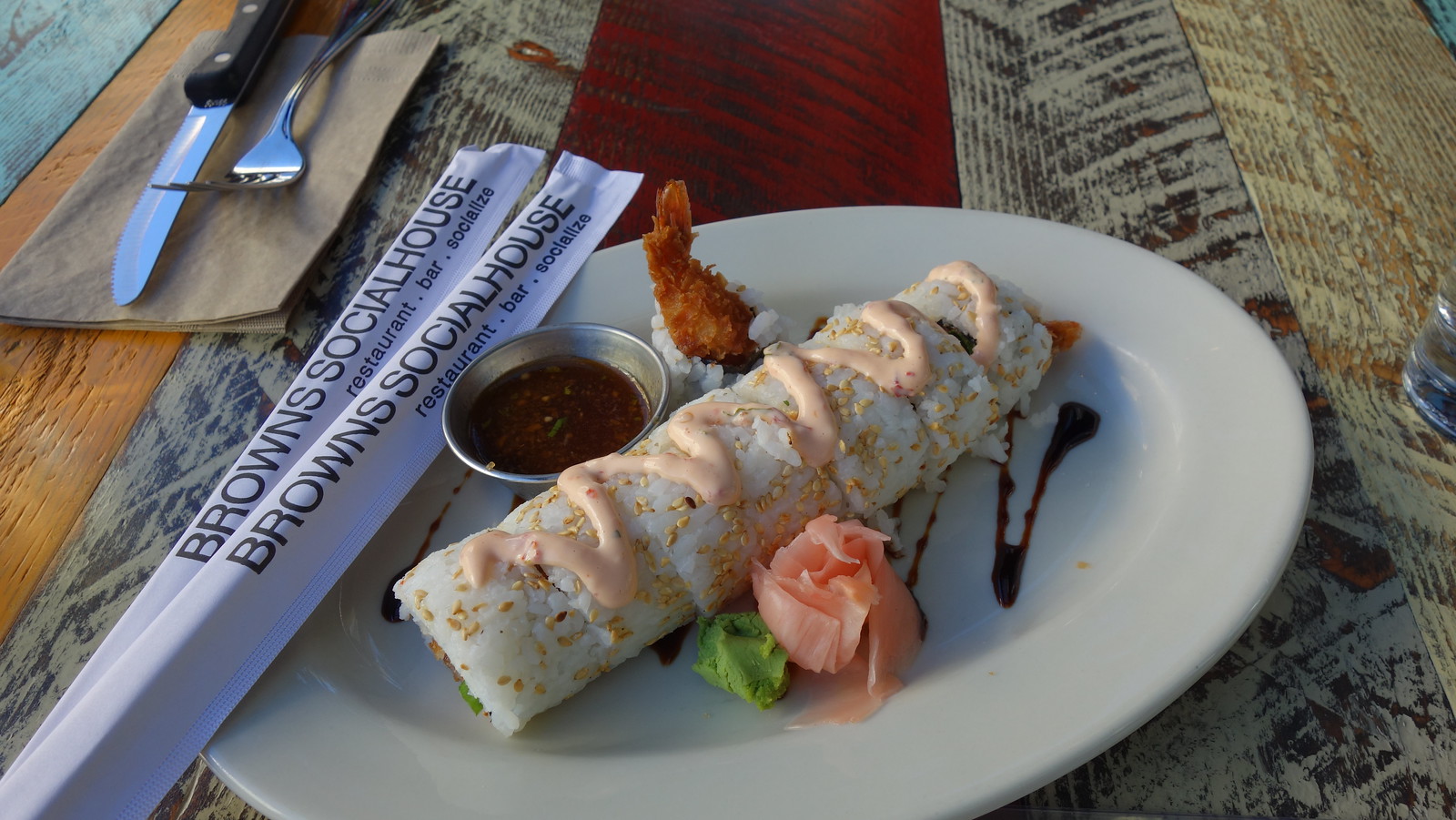 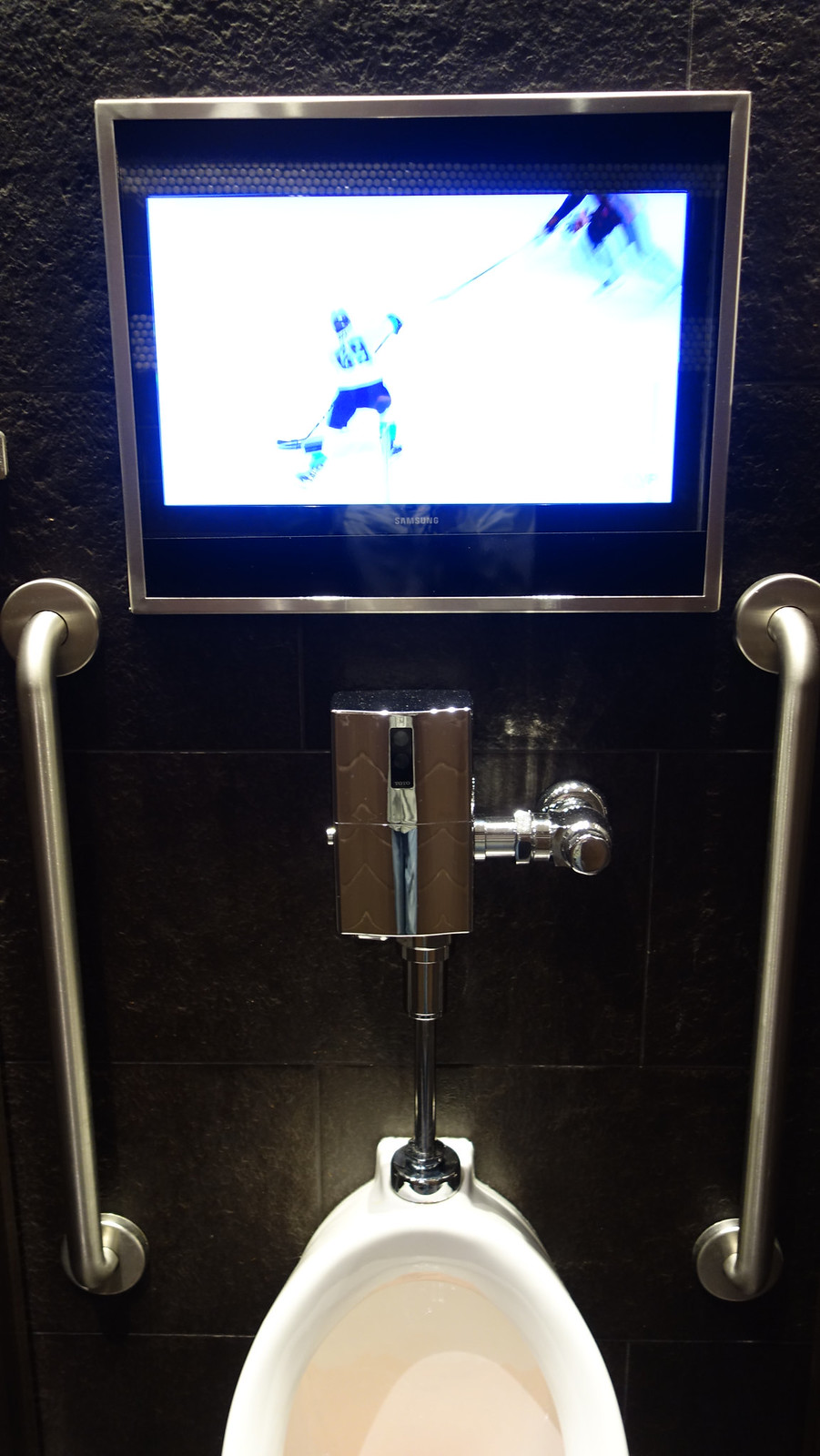 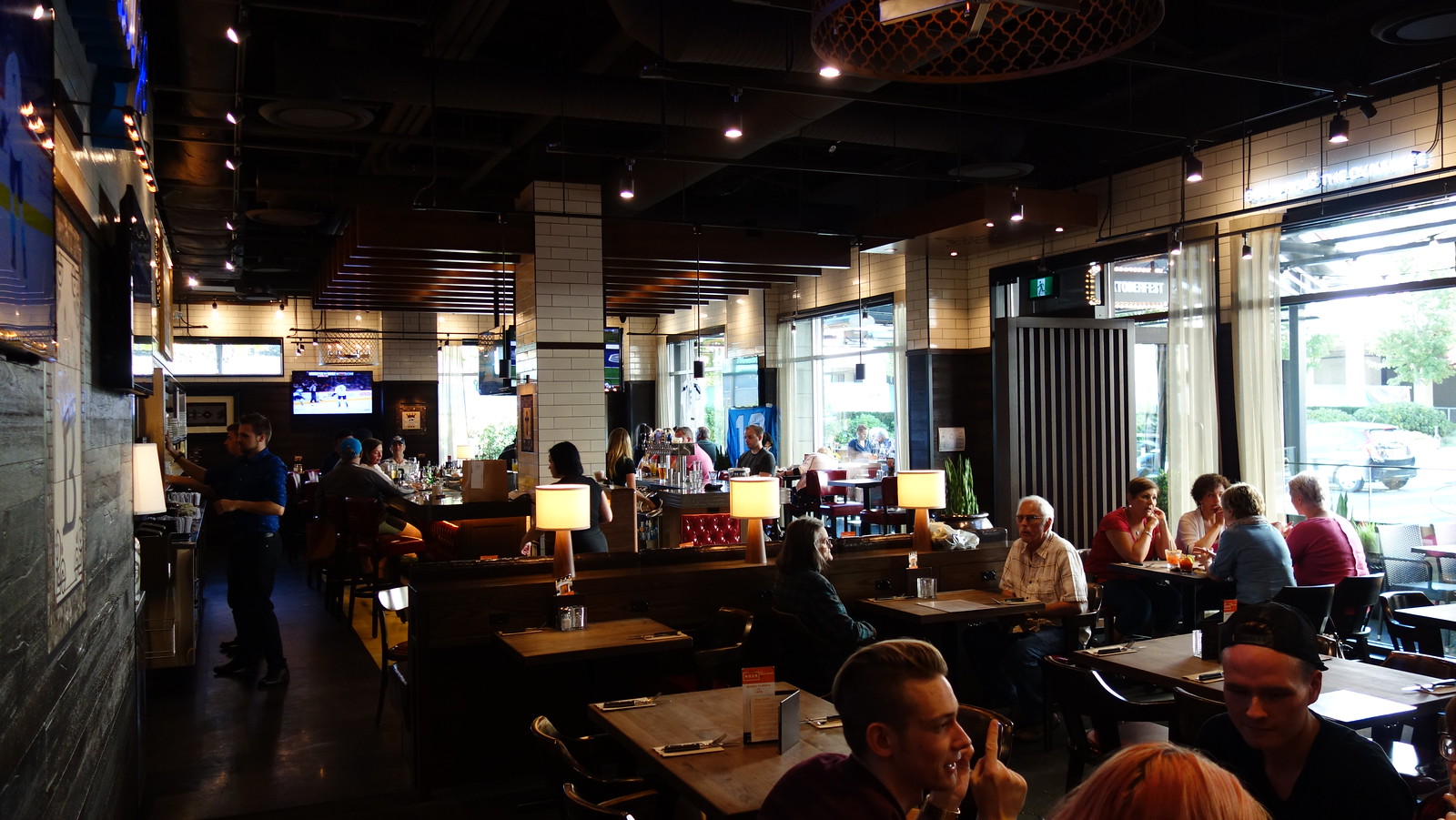 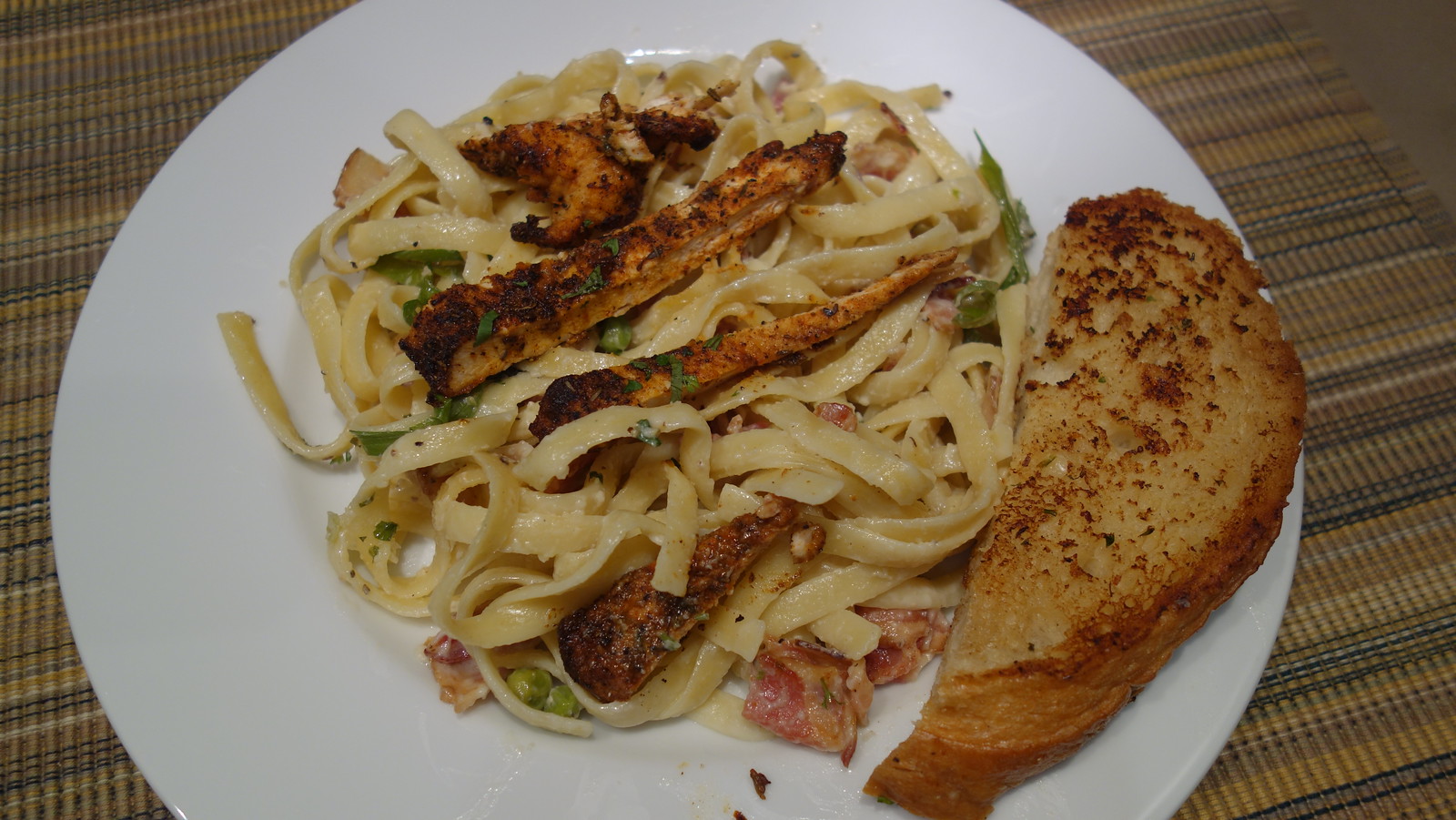 They appear to be implementing the Ravine Way section of the bike lane proposal from this diagram posted awhile back by Nagel.  The black lift looks to be on the new separated bike lane.  Also of note is that Ravine Way will apparently not provide delivery access for Whole Foods.  I guess that is going to be done from the basement under Whole Foods? 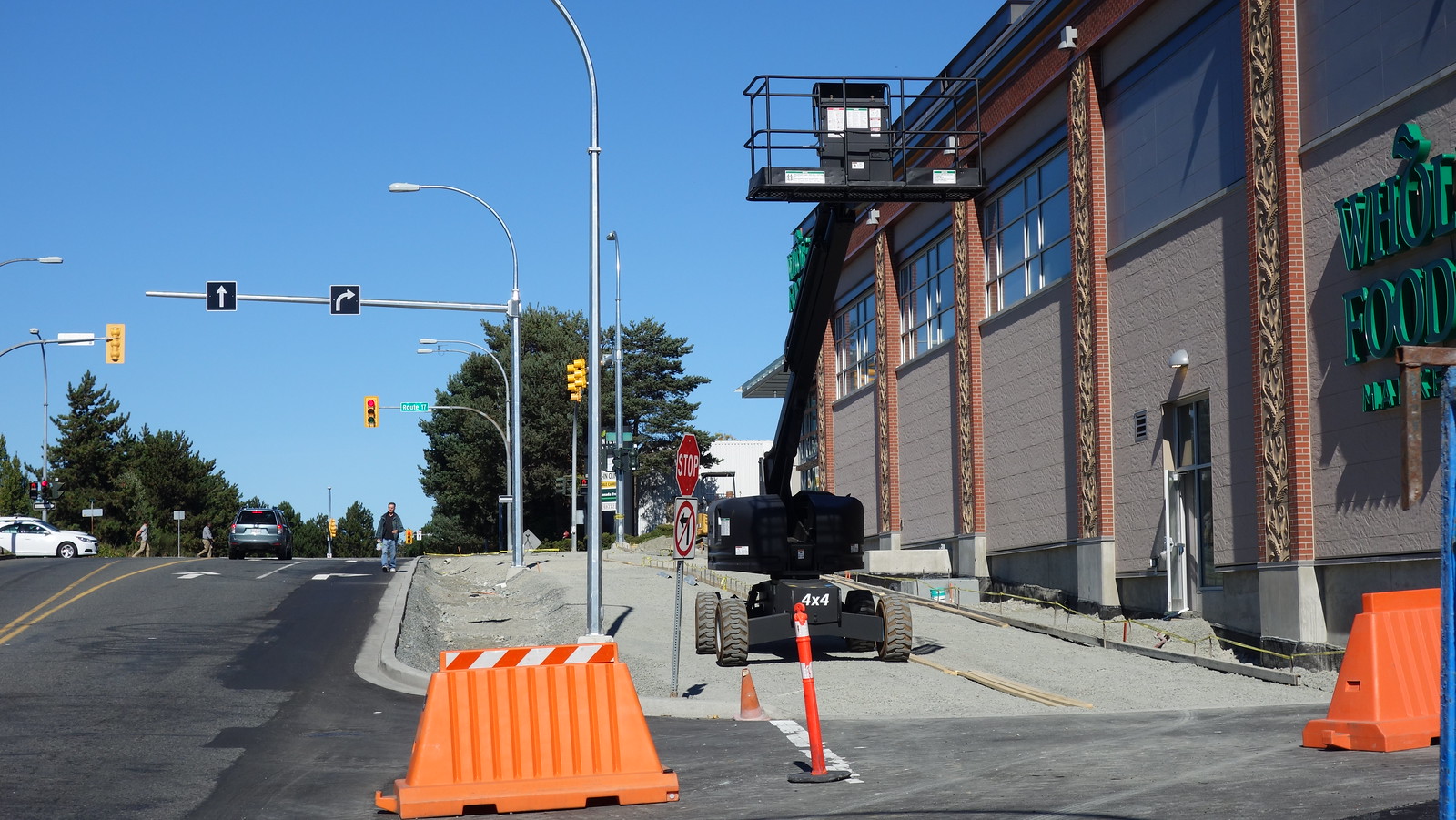 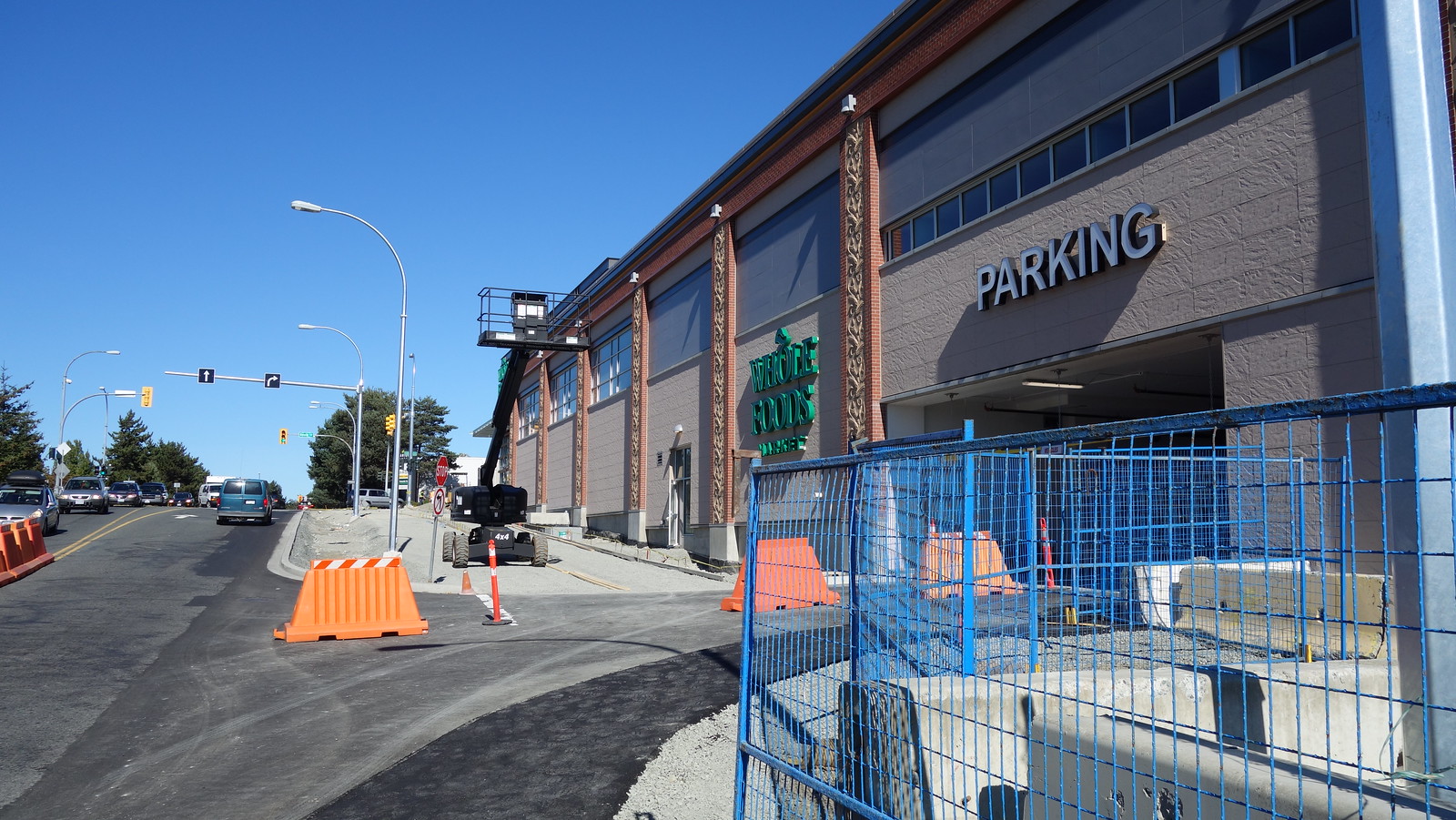 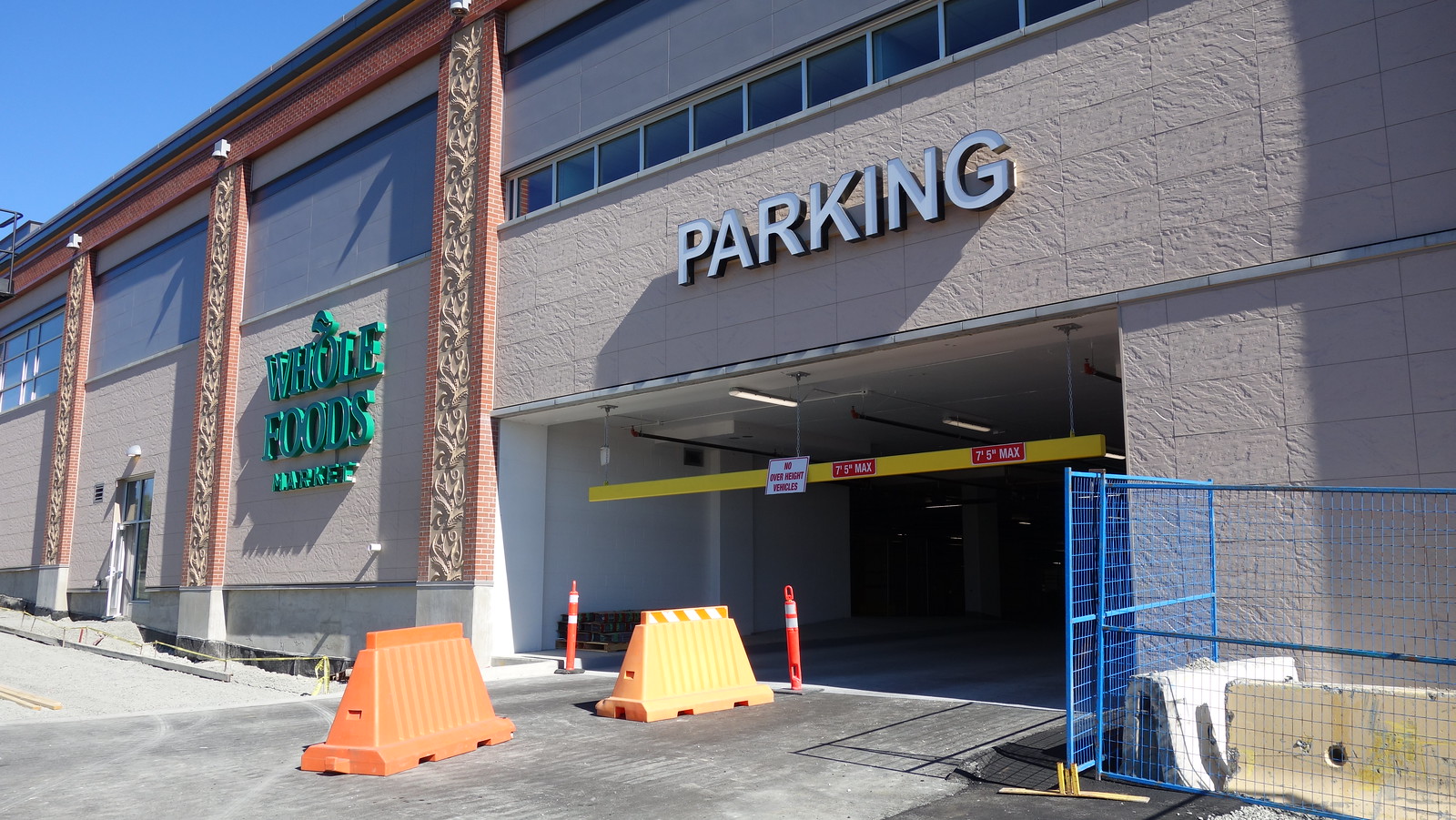 However Carey Rd. remains the same in front of the construction lot, although they have added an island extension into the road that would block the current bike lane and apparently right turn access to the Mall by Brown's.  It's like they want to funnel north bound Carey traffic to Ravine Way and into the parking structure under Whole Foods.  I didn't notice this when I was there but from the pics they may also be restricting turns from the Mall to only north bound onto Carey. 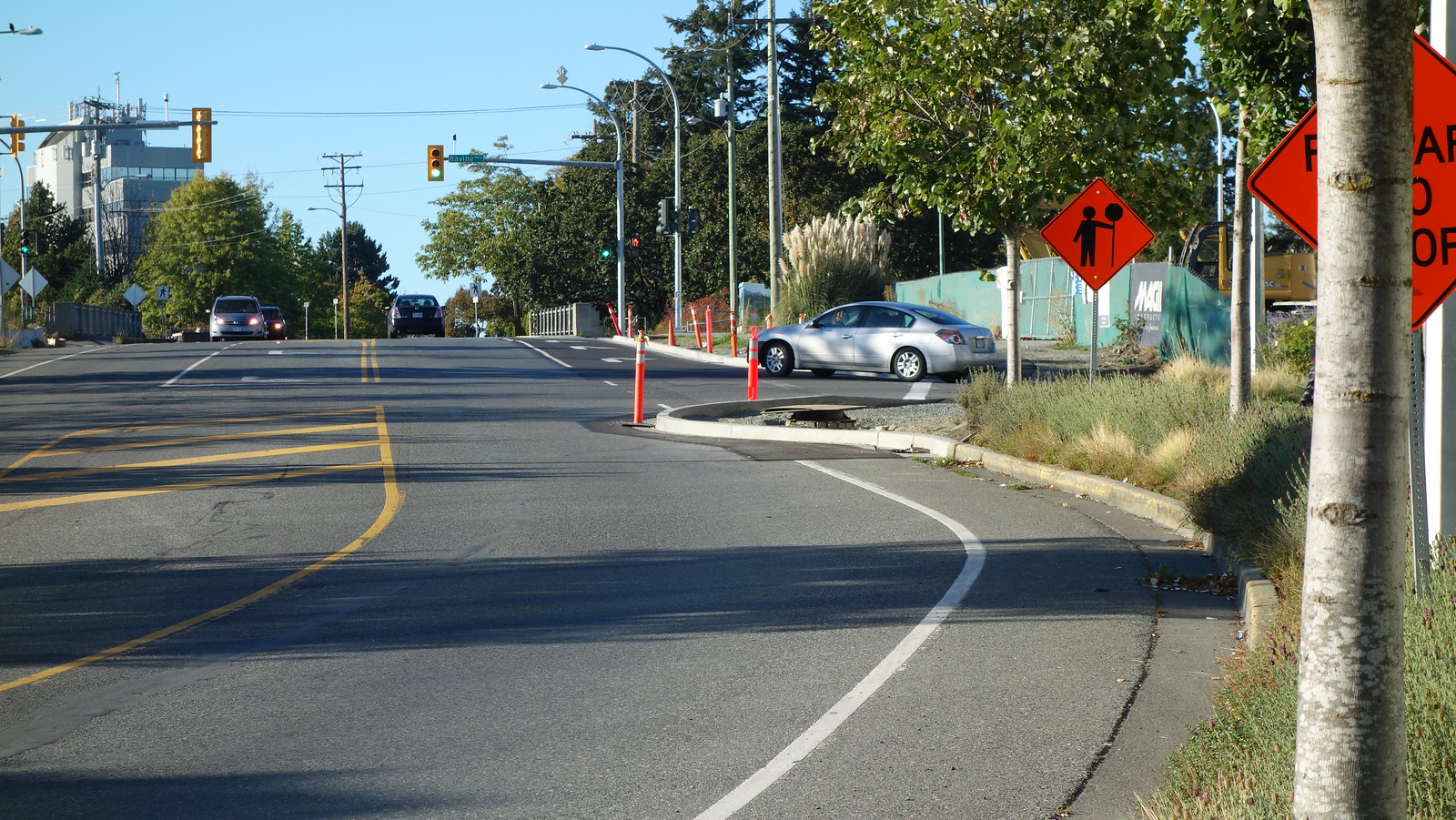 The last pic shows how they've torn up part of the existing island to realign the crosswalk across Carey Rd.  Now if they could only provide a proper paved path to the Goose from here all would be right with the world.  As it stands, it's kind of a crosswalk to nowhere. 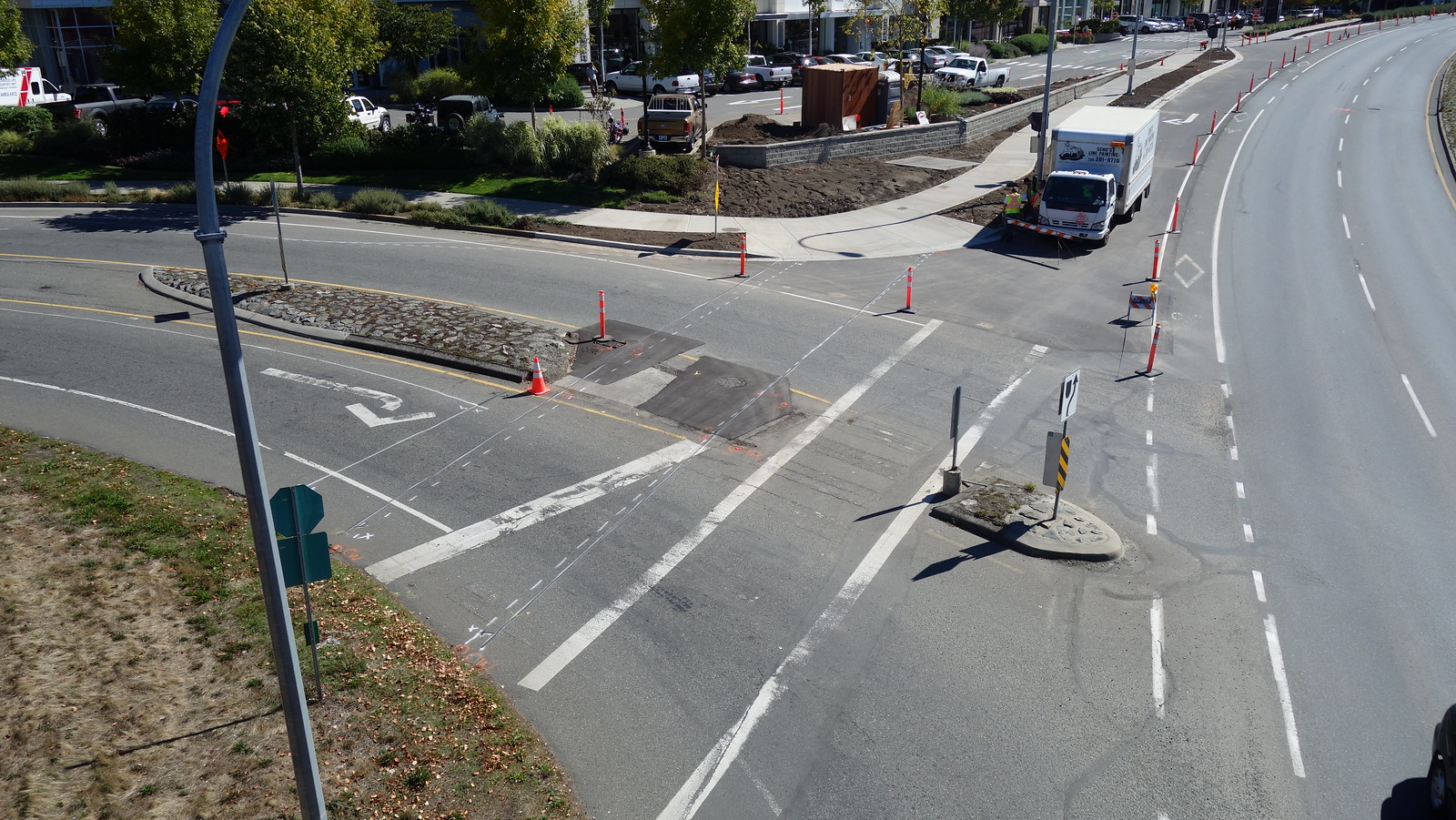