there's your two christmas blockbusters for 2019.

Apparently there is a new historical drama out called A Hidden Life and it's well reviewed but hard to find at theatres because, according to New York magazine it's owned by Disney and the terms they demand of theatres is all but impossible to abide by. For instance, they insist the movie show exclusively on a screen, like they would with a comic book blockbuster. They can't just show it once or twice a day along with another film. So movies for grown-ups are getting even harder to find.

With the coming holiday period, “Rise of Skywalker” is poised to dominate the year’s most lucrative week of moviegoing. Cathleen Taff, distribution chief for Disney, called it a great start.

“With critics, we’ve seen that our movies have received lower scores than not but that they continue to do business because they’re great quality movies for the moviegoer,” said Taff. “Audiences are generally responding really positively to the film.

“We know that people are very passionate about ‘Star Wars’ and have very strong opinions about it. And we’re fine with that,” added Taff. “We think it’s inspiring to see so many people who want to prompt a discussion around a film.”

The $100 million production, featuring an ensemble including Jennifer Hudson, Judi Dench, James Corden, Idris Elba, Ian McKellen and Taylor Swift, came in behind projections and opened in a distant fourth place. The movie drew an 18% fresh score on Rotten Tomatoes and a C-plus CinemaScore from audiences.

“Even modest opening in this extraordinary lucrative corridor can prove very kind to films,” said Jim Orr, chief of distribution for Universal. He anticipates the film’s strongest demographic — older moviegoers — will be most available over the holidays. “Our scores from those who are 55 and up are very good and very encouraging.”

that's some kind of spin from both spokespeople.  cats is going to rely on the 55-plus crowd through the christmas season.  ok.  good thing none of those 55+ read reviews.

Mandalorian is I think off to a really good start. I started watching once Baby Yoda started taking over the internet. Obviously set in the Star Wars universe but not tied to the movies.

Rise of Skywalker is decent too.  It ties things up fairly nicely, while giving providing the usual action and *holy shit* moments.

they were both fine and worthwhile but nothing incredible.  1917 was no gallipoli (although there were striking similarities in plot/style).

Nighy to chat after Feb. 8 screening of the film Hope Gap 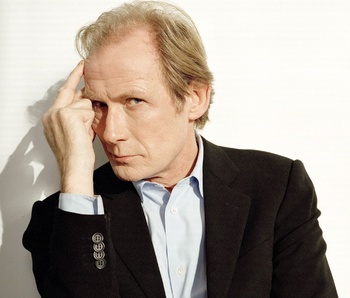 That's actually rather exciting, his filmography is brilliant. Best Slartibartfast.

Nighy to chat after Feb. 8 screening of the film Hope Gap

That is an event I HAVE to go to.  I love Billy Nighy

they were both fine and worthwhile but nothing incredible.  1917 was no gallipoli (although there were striking similarities in plot/style).

Interesting because Mrs ASE wants to go see 1917 tomorrow, its my kind of flick and its getting generally great reviews from what I've read. What did you find lacking about it?

well a few things.  first of all after i saw it i read all the reviews indicating how great it was that it was filmed in one long take (or one simulated take - it would not be possible to actually film it in one).

to be honest i never even noticed that.  maybe that's what made it a lesser movie now that i think of it. it just follows these two guys.  there is no back story of the war or where they are or when it is (you know it's 1917 only because of the title).

there is just not a lot of story there.  right off the bat right at the start of the movie two guys get volunteered to go to another position to warn of an ambush.  they have only so many hours to get there so they leave right away.  there is no particular chemistry between these two guys as they travel and then because they are on the move the whole time they don't spend more than a few minutes with any other cast members.  that and for one other reason i can't say without spoiling - you don't really get to know them.  and these are the guys that make up 98% of the screen time.

by the time their objective is reached and the film ends it's kind of like ok whatever. it was an interesting run but seems fairly insignificant.  because of the way it is filmed you have never met the soldiers they are hurrying to get to to save so you have no real feeling of "get there quick!" like you might have if you developed some knowledge of the guys they are trying to save.  yes you know one guy is the brother of one of the men making the trip but you don't meet him early on you just hear about him - and nothing major about him other than it's this guy's brother.

now earlier i contrasted it with galipolli - also a ww1 film (different theatre of war though) about a guy (mel gibson) running to save troops but he is racing to save his own battalion that you have leaned to know many of the characters over the first 3/4 of the film including gibson's best army friend.  that gets your heart racing and you onto the edge of your seat. and if you've seen the film and know how gallipolli ends it's one of the most amazing endings of any film i've ever seen to this day - and it's a 1981 film.

Thanks. Interesting take because some of your points mirrored my thoughts after I saw Dunkirk, also extremely highly touted at its release and which I was very disappointed in. Dunkirk was a boys night out at where one of them fell asleep 2/3 of the way through it and my own disinterest level was quite high by then as well.

There were so many aspects of that film that were really lacking; hoping that isn't the case for 1917 but I guess we'll find out tomorrow night. I am mainly interested in this one because WWI was my grandfather's war and there are so few films - both in quantity and quality - with the Great War as the central theme, especially in comparison to the Second World War. Aside from Gallipolli and Lawrence of Arabia most "WWI" films of note were produced prior to 1939 so if nothing else it will be interesting to see a contemporary treatment of the subject.

Just got back from 1917 - all I can say is "wow". I really liked this movie.  So did the rest of the audience which jam packed the Silver City theatre. You know after its all over and you can hear a pin drop its because everyone is trying to collectively process what they've just seen. A woman in front of us said as we were leaving "now I have a much better appreciation of what grand-dad went through". Amen to that.

To be blunt if your idea of a 'war' movie is a bunch of big guns on land or sea blasting away at each other with expansive wide angle shots of thousands of troops going at it for 2 solid hours or, as is too often the case with US-produced war cinema, a whole bunch of stars and stripes flag-waving "Murrica Hu-RAH!" schlock - then you'll be disappointed.

There is little in the way of actual combat in this film. It focuses on a much more cerebral level on the impact of the experience of war on and at the individual soldier level; the lack of expansive "battle" scenes notwithstanding, it does a superb job illustrating the terror that is war, and what it must've been like going "over the top" into no-man's land. Big thumb's up from me. 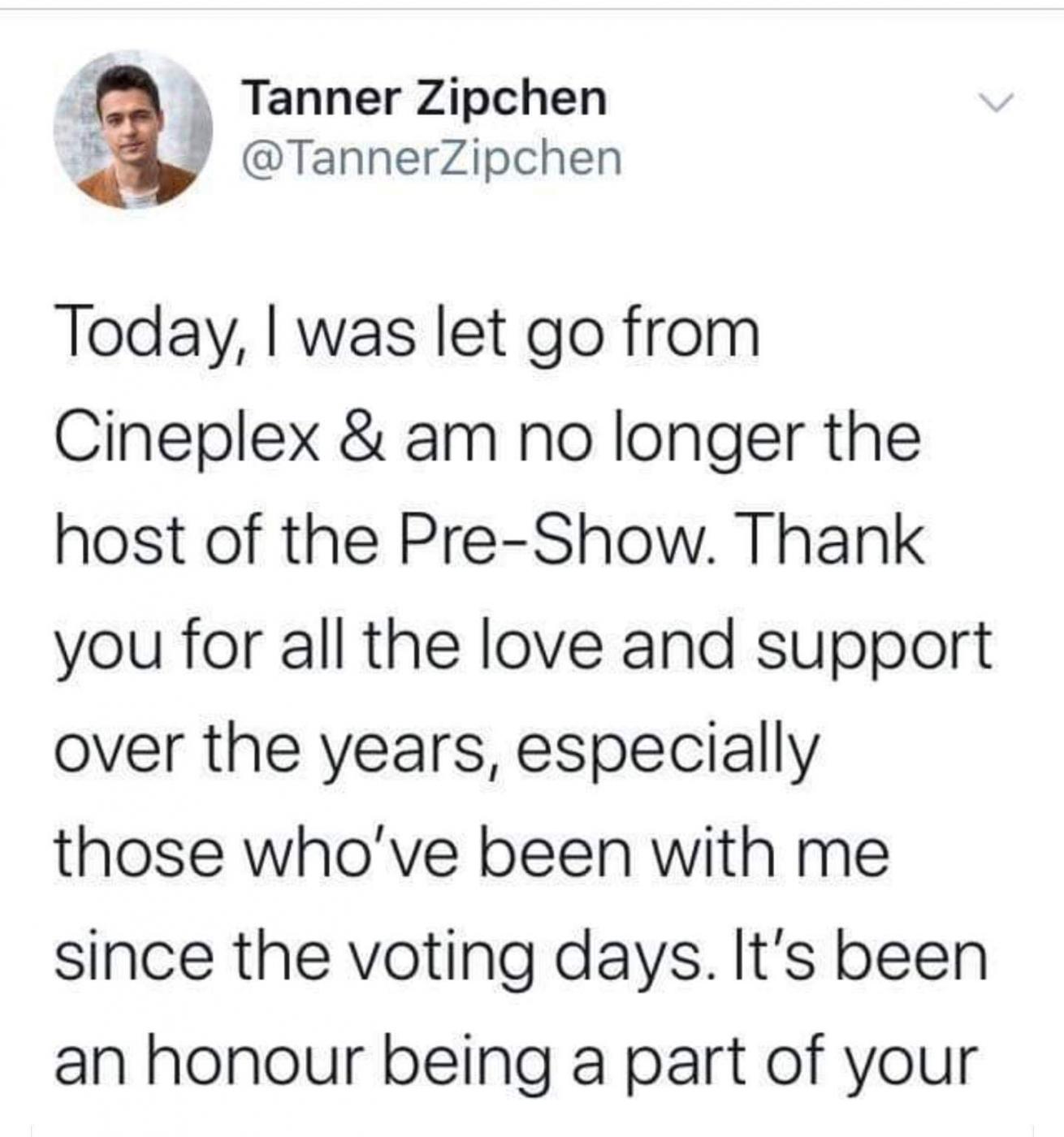 i will admit he was pretty affable.  i had no complaints.

The Canadian movie-going experience will officially be changed forever — and arguably for the worse — after news that Cineplex has decided to part ways with their affable Pre-Show host Tanner Zipchen.

The Saskatoon native has been a fixture of Cineplex for years, hosting the Pre-Show where he'd often interview celebrities, as well as gently guide audiences through the complicated yet ultimately rewarding Timeplay segment.

Tanner revealed that he was let go by the theatre chain in a heartbreaking tweet:

I have seen 6 of the 9 best picture nominees.

it has an implausible and strange plot. and no redeeming or likeable characters.

once upon a time in hollywood

it has an implausible and strange plot. and no redeeming or likeable characters.

Then I take it you didn't like Being John Malkovich?

Would I be correct in saying Parasite is so far the least viewed Best Picture winner in North America?

The Irishman was alright but not Oscar material. Deniro wore contact lenses and looked so goofy throughout the film. I thought it was a bad decision and found it distracting in some scenes when his gaze looked off.