On Saturday, August 17, 2019, just before 9am, Saanich Police responded to a report of a man laying unresponsive outside a home at the intersection of Crease Avenue and Wascana Street.

The man was confirmed to be deceased by emergency personnel and due to the nature of his injuries, his death is suspicious.

The area around where the man was discovered has been cordoned off and the Vancouver Island Integrated Major Crime Unit (VIIMCU) has taken over conduct of the investigation. They will be working closely with detectives from the Saanich Police General Investigative Section and Forensic Identification Section, other specialized units from across the region, and the BC Coroners Service over the coming days.

The investigation is in its early stages as investigators continue to work to confirm the man’s identity and his cause of death. It is expected that officers will be in the area, with it cordoned off, until sometime tomorrow.

“This is a residential area, close to several businesses, the Galloping Goose Trail and the Trans Canada Highway. It is very likely that someone from the area or passing through, saw something of value to this investigation. If you were in the area between 6am and 9am yesterday morning, we want to hear from you. Additionally if you were driving through at that time and have dash cam video, we would like to view it” said Sgt. Julie Fast, Public Information Officer for the Saanich Police.

Just when you thought Oak Bay was a sleepy enclave with feral deer as its biggest problem, Oak Bay Police have announced that they are working to track down one of two men involved in a robbery with a firearm last week in the municipality.

The force says two men robbed another man at gunpoint. One stayed with the man while the other took his ATM card to a bank machine.

Police say one man has been already been apprehended and is in custody, and that the parties knew each other. The second suspect has been identified.

and then you’ll probably find that the victim owed a drug debt.

I don't think going to an ATM is the smartest thing for a robber to do, with those cameras in your face and all.

probably not. but if you are already known to the victim the perp is already on the way to being caught.

Investigators from the Vancouver Island Integrated Major Crime Unit and detectives from Saanich Police are continuing work on the investigation into the suspicious death of a man who was found in the driveway of a home at Crease Avenue and Wascana Drive.

One of the first priorities of the investigation was to identify the man. Late yesterday, after extensive work, his identity was confirmed to be Andrew Michael Sidor, a 30 year old man from Victoria. Mr. Sidor’s family has now been notified of his death.
“Our sincerest condolences go out to Mr. Sidor’s family and friends. We will continue to put all necessary resources into investigating how and why he died, to bring some level of closure to those who loved him” said Sgt. Julie Fast, Public Information Officer for the Saanich Police.

With his identity known, officers have been able to track some of his movements prior to his death and have obtained surveillance video from the Rock Bay area of Victoria of Mr. Sidor on Thursday, August 15th. Mr. Sidor was wearing the same clothing in this video, as he was found in at the time of his death. However police have not recovered his backpack, nor his shoes.

We believe these two items may provide valuable insights into Mr. Sidor’s death and are appealing to the community for help in locating them. We have include still photos from the video surveillance of Mr. Sidor, showing him wearing his backpack and shoes.

🔹The backpack is described as being all black, with possibly some reflective or shiny material on the shoulder straps.
🔹The shoes are described as white, or light coloured, lace up runners.

If you find these items, we ask that you call police immediately. Please do not touch them or move them. Additionally, we are asking for anyone who had contact with Mr. Sidor between August 15th and the morning of August 17th, to call us.

tied to rock bay. no real surprise there.

2900-block is the strip north of Burnside.

🚔Woman Sought After Daytime Robbery along 2900-block of Douglas🚔

Victoria BC- VicPD Patrol officers are asking for the public’s help as we attempt to locate a suspect in a daytime robbery.

Officers were called to the 2900-block of Douglas Street at 3:00 p.m. this afternoon for a report of a robbery. A lone woman entered a store, brandished a weapon and fled the area. The woman is described as Caucasian, standing five feet, one inch tall, wearing a black mask, hoodie, white shoes and dark pants. The store employee was not physically injured. A picture of the woman is below.

I mean, would it kill them to say the Douglas Centre strip mall?

Hmmm... Aren’t there a bunch of low barrier housing complexes right around there?

Where's the links, Mike? Why the copy paste without the sources so we can look at the photos?

yes i'd like to see links too when there is a photo(s) or other information not posted here but contained at the original source.

A B.C. Supreme Court jury will learn Wednesday morning whether the lawyers representing Andrew Berry will present a case in his defence.

Berry is charged with the second-degree murders of his daughters, six-year-old Chloe and four-year-old Aubrey, at his Beach Drive apartment on Christmas Day 2017. The 45-year-old Oak Bay man has pleaded not guilty to the crimes.

i suspect the defence will not call any witnesses.  they'll argue that the crown has not proved their case.

more details on this show it's not a simple robbery.  all parties likely crooked.

Police said that two people had entered a suite of a man they knew last week in order to sell him some items. When no sale was made, one of them pulled what appeared to be a 9-mm handgun.

"some items" eh?  like a patio furniture set maybe?

no probably something they thought he had agreed to buy.  drugs weapons or stolen items etc.  the suspects just wanted to complete the deal as previously agreed.  so took it upon themselves to make that happen.

"no sale was made".  these poor door-to-door salesman were just upset that their pirch did not result in a sale.  i mean they have a 85% close rate on most vacuums they sell.

Where's the links, Mike? Why the copy paste without the sources so we can look at the photos?

You can always find the photos on our Facebook page.

You can always find the photos on our Facebook page.

just sort of proving photos and links are a hassle to upload to this forum compared to posting to Facebook when even the moderator with the assets can’t be bothered.

Yeah, it’s a little tough on mobile to upload photos. But how would I link to an email?

The radio doesn’t show you photos, but you still get the news through that medium, right? No photos, no links.

Victoria, BC- VicPD officers have seized drugs, replica firearms and over $50,000 in cash as part of an investigation into drug trafficking in the Burnside Gorge neighbourhood.

Officers from our Community Services Division, Strike Force section, and our Patrol Division “D” Watch worked with officers from the Greater Victoria Emergency Response Team to execute a search warrant of a residence in the 600-block of Manchester Avenue on July 8th, 2019. The search warrant was the result of weeks of investigation into reports of drug trafficking.

This file remains under investigation. No arrests have been made.

If you have information about drug trafficking in your community, please call our non-emergency line at (250) 995-7654. To report what you know anonymously, please call Greater Victoria Crime Stoppers at 1-800-222-8477.

I’ll try to ensure photos are included with these releases, when they’re available via email. VicPD’s servers can’t handle the traffic load when they send out a release so their site can be down for some time after news breaks. It can be a little frustrating as you’re trying to get content from the actual site but it won’t load. The website sometimes has better images than what comes through email. 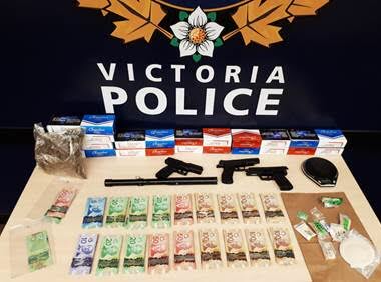 it’s a good thing they laid out the cash like that. otherwise we might have falsely assumed it was all in 5’s.

how many tables would they need to show the money wasted on the elsner file? that would be a good visual.