There was a glass-smashing spree along Fort Street last weekend. A woman was caught after the windows of several Downtown businesses were destroyed. Russell Books, Island Blue, The Blue Fox and reportedly the Volvo lot of Cook and Yates were randomly targeted. Witnesses including a Blue Fox chef chased the perp and she was captured by police.

Supposedly, people under the influence of meth have a thing for the sound of breaking glass, no joke.

I am informed that the woman caught doing this is remorseful--is not a druggie, just someone having a very bad day, full of rage and that they've never done anything like that before and that she has agreed to pay for the broken glass.

The fatal shooting of an Indigenous man in Campbell River in a confrontation that also left a police service dog dead raises questions about the use of police dogs to apprehend suspects, says a criminal defence lawyer.

Why apprehend suspects at all? Isn't that the logical next step? If you commit a crime short of murder they just let you go anyways so why bother in the first place?

After all, there is no correlation between Victoria's and SF's rampant crime sprees and the hands off approach that the justice system has been taking in recent years.

they let you go pending a court appearance. then if you miss that they no longer let you go.

most cases are resolved with a conviction and a sentence.

it’s unclear still what this guy had the warrant out for.

but generally yes you should probably strive to apprehend people only if they are a serious danger. almost everyone else will likely end up apprehended at some other future date anyway.

Greater Victoria Crime Stoppers
Dear Suspect,
Wave your hands in air like you just don't care!!
Was that the tune you were humming to yourself as you entered the Uptown Store on 27th June?

Well I am glad that CS can make light of this, is certainly isn't the store owners.

I read recently that about 2/3 rds of small retailers are operating at or below breakeven. Many of them are new immigrants to Canada trying to scrape together a future for their families. A few thefts over the course of a month is the difference between being able to cover costs and not.

We are seeing what is happening in SF with stores just shutting down because of rampant shoplifting and we aren't far behind here. Now I realize that Helps and her socialist cabal all think that business owners are rich a$$holes and that shuttered businesses will just make room for more zero barrier housing, but it isn't that simple.

they let you go pending a court appearance. then if you miss that they no longer let you go.

most cases are resolved with a conviction and a sentence.

it’s unclear still what this guy had the warrant out for.

but generally yes you should probably strive to apprehend people only if they are a serious danger. almost everyone else will likely end up apprehended at some other future date anyway.

And your court appearance is two years out and in the mean time you commit another 30-40 crimes. Nobody seems to care about shoplifting so if that is all they did then fine, but smacking your 'old lady' around a few times might not be as appealing if you are the 'old lady'.

I don’t think it works that way.

even after your very first release you must agree to “keep the peace” until court. so if you are caught after your next offence you might face increasing barriers to release.

I agree that opening the doors to 2000 extra homeless made no sense but what can you do now, other than throw the politicians out in 2022.

Why apprehend suspects at all? Isn't that the logical next step? If you commit a crime short of murder they just let you go anyways so why bother in the first place?

After all, there is no correlation between Victoria's and SF's rampant crime sprees and the hands off approach that the justice system has been taking in recent years.

That appears to be the way we are headed.  The more violent you become, the more likely you'll be left alone.  Then get in your car and floor it.  No one will stop you.  It's Victoria.

One person was arrested following a stabbing and assault in downtown Victoria on Saturday morning, say police.

Multiple police vehicles and ambulances responded to the intersection of Broad Street and Johnson Street at 8:10 a.m. after a person was found “bleeding heavily” following a fight, according to the Victoria Police Department.

The victim, police say, had been stabbed and that responding officers provided emergency first aid before paramedics arrived on the scene.

Officers soon found a suspect in the 900-block of Pandora Avenue. When officers tried to take him into custody, he headbutted and injured a Victoria police officer. The suspect is now being held in police cells.


so no word on this guy’s priors. but as you can see here, serious assault and he’s being kept for court.

Case rests on whether woman consented to bondage during sex

Times Colonist -  25 Jul 2021
A B.C. Supreme Court judge must decide if a young woman gave her consent to be bound with zip ties and blindfolded during sex or whether she endured a planned, savage, prolonged confinement and sexual assault which left her fearing for her life.

Nicholas Johnston is charged with sexual assault, unlawful confinement and threatening the woman on Dec. 2, 2018.

not to victim blame but that’s awful risky behaviour.

why not have sex with someone you know instead of a stranger? or at least employ a buddy system - bring a friend.

although after reading the article twice - if I was going to guess I’d say he is likely to be acquitted. I don’t think “she has no reason to lie” is a solid basis for proof that HE is lying.

we have not heard about any physical evidence. him from the hand bite or her from the punch.

he did take the stand though.

A 76-year-old Saanich resident was arrested Sunday at Hamsterly Beach in Elk/Beaver Lake Regional Park after a witness reported an indecent act on July 24.

The witness of the July 24 incident recorded the suspect’s license plate and provided it to police.


he has a “license plate” on his genitals, or do they mean his vehicle?

Here are the official stats as per the Crime Severity Index.

As we can see, Victoria is off the chart high. 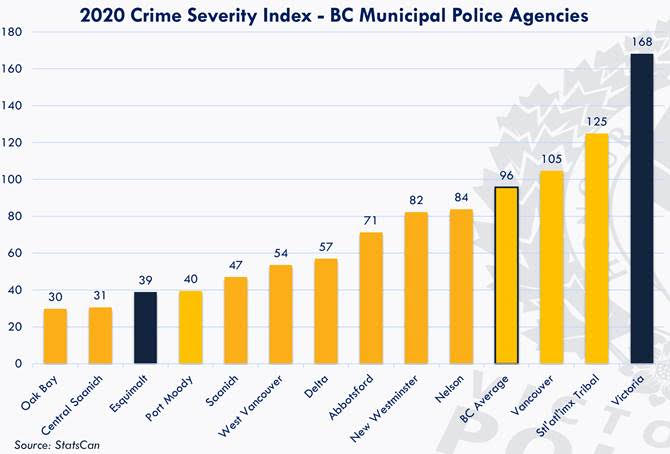 The 2020 CSI has a new format this year, marking the first time that CSI numbers are available separately for Victoria and Esquimalt.  While VicPD provides policing service to both Victoria and Esquimalt according to each community’s unique needs, previous CSI measures published by Statistics Canada were for both municipalities combined.

“The newly released Statistics Canada data reflects a severity of crime in the City of Victoria that is unacceptable,” Chief Del Manak said. “Our department is committed to doing everything we can to reduce Victoria’s crime severity index, and I look forward to working with our partners in the region to achieve this goal. Despite these challenges, I am proud of the work of our officers who continue to respond to a number of high-priority, resource-intensive calls on a daily basis with an unwavering dedication to public safety. Moving forward, the separation of the Statistics Canada data for Victoria and Esquimalt will help us better identify the work that lies ahead, while highlighting areas of success, such as the valuable community-based policing approach in Esquimalt.”

The Victoria Census Metropolitan Area’s CSI for 2020 is significantly lower than Victoria’s 2020 CSI.  The difference between these measures is indicative of the concentration of activity in the City of Victoria. As the downtown core for the region, the City of Victoria is challenged with higher numbers of calls for police service, more social disorder concerns and a population with higher needs when compared to the surrounding primarily suburban municipalities.  As the jurisdiction with the highest urban density in the region, the largest number of liquor seats, the significant majority of multi-unit residential temporary housing facilities, and being the provincial capital of BC, Victoria is a unique, urban policing environment.  The Victoria Police Department has long supported amalgamation with other departments in the region in an effort to unify the resources needed to resolve the ongoing reality of public safety in the region.

The change to separating the Victoria and Esquimalt CSIs required a change in our current VicPD Community Dashboard, which has been updated accordingly, including additional details related to StatsCan’s release of information such as the Violent CSI and Non-Violent CSI figures for both Victoria and Esquimalt.  Future Community Safety Report Cards, beginning with the Q2 2021 report card (scheduled to be published in August), will also be amended.  To maintain transparency, the previous “combined” CSI data for VicPD’s jurisdiction of Victoria and Esquimalt will continue to be available as an online archive in both the VicPD Community Dashboard and future Community Safety Report Cards.

As long as so many crime enablers sit on the CoV council, Victoria's crime severity will remain disproportionately high.

Nearly 2x the BC average. And almost 6x the Oak Bay rate. the closest municipality. 3X the Saanich rate. the much larger municipality right next door.

It's not even disproportionately high, it is absurdly high. Victoria is a literal free-for-all crime zone with a crime severity index shockingly out of range with where it should be for a community its size.

Remember how the media used to portray Esquimalt as this big bad place? Yeah, well, it has a CSI of 39.

and it’s all been since we elected that horrible Mayor.

It is true, that Victoria began changing drastically since 2014. The shift was immediate.

Now it is criminally bad, the level of dysfunction and violence. Yesterday while downtown a man walked by me who looked like he had been injured, with blood dripping from his upper arm. As a grown, able-bodied man, I was too damn scared to get out of my vehicle to even walk the 200 meters to the food outlet where I had an order waiting to take home with me. I waited until he was out of sight before I got out of the truck. My biggest fear was that the injury was self-inflicted and that he may have had a knife on him. This was just a regular Monday, 6PM, on View Street at Blanshard.