But just like the Emergencies Act, the law doesn't apply to them....

Miller is the sarcastic lawyer haha. He can hardly contain himself.

Apparently they were looking at the emergencies act from the start of the pandemic....

PMO said that to excuse the talking about it in her notes. To try to brush it off... She had a very poor memory. Her brain must be like the sea of black that the redacted notes of her meeting look like.

Looks like no threat assessment was considered. At least no document was shared at the meeting. Clever lawyer. They had been blocking this via attorney client privilege's and cabinet privilege. So she asked not about the facts themselves but if facts were presented.  They couldn't answer yes. Good move. So basically admitting that it was their opinion....

Unless he takes a long weekend in Tofino or tests positive for Covid again.

Unless he takes a long weekend in Tofino or tests positive for Covid again. 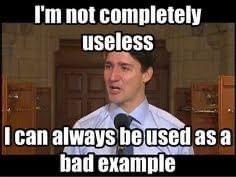 Isn't our economic security threatened by shutting down/impeding our oil and gas industry?

Police operational plan.... Trudeau: "you should read it".  Plan: ALL Black. Redacted. Trudeau: "I haven't read it" Trudeau: "I can testify that it wasn't a complete plan". So comfortable lying.

“I can testify that we never thought of buying 10 tow trucks and just getting the army/qualified people to operate them”.

Which would have been the correct solution.

The good news is that should we require an actual insurrection here in this country, it’ll be super easy.

He's got a scapegoat in CSIS now, I think...

The CBC took the time to publish a front page story about Kanye West and the growing issue of antisemitism. They focused on Alex Jones and Dave Chappell in their piece, too. Here it is: https://www.cbc.ca/n...dcast-1.6671015

But somehow, they forgot this, which the National Post had to publish:

A Liberal cabinet minister, the leader of the Green Party and MPs from all other parties attended an event earlier this week that hosted the publisher of a newspaper known to publish Holocaust denialism and with a long history of publishing antisemitic content.

The event, held on Tuesday, known as International Day of Solidarity with the Palestinian People, was hosted by Toronto-area Liberal MP Salma Zahid, chair of the Canada-Palestine Parliamentary Friendship Group.

Nazih Khatatba, publisher at Meshwar Media, was present as an invited guest. His newspaper, al-Meshwar, has claimed the Holocaust was a Jewish plot, and has referred to it as a “holohoax.”

In November 2017, an article published in the al-Meshwar newspaper claimed the Holocaust was a Jewish plot, claiming banks associated with the “Zionist movement” funded Adolf Hitler’s rise to power in the 1930s.

Earlier that same year, Khatatba gave an interview on a Rogers TV program, urging Canadians to “not believe the fairy tales claiming Jews have suffered oppression.”

So I ask you, as Canadians. Which news piece is more relevant to you, as a Canadian? Which one do you think is the more important one, and which one is the distraction?

Now don’t get me wrong, the Kanye story is relevant to some degree but it’s just the latest ridiculousness from someone who clearly has some issues, obviously.

Remind me again why we should care about anything Kanye West says?

^ exactly. He makes no sense at the best of times.

Because it’s a great distraction.